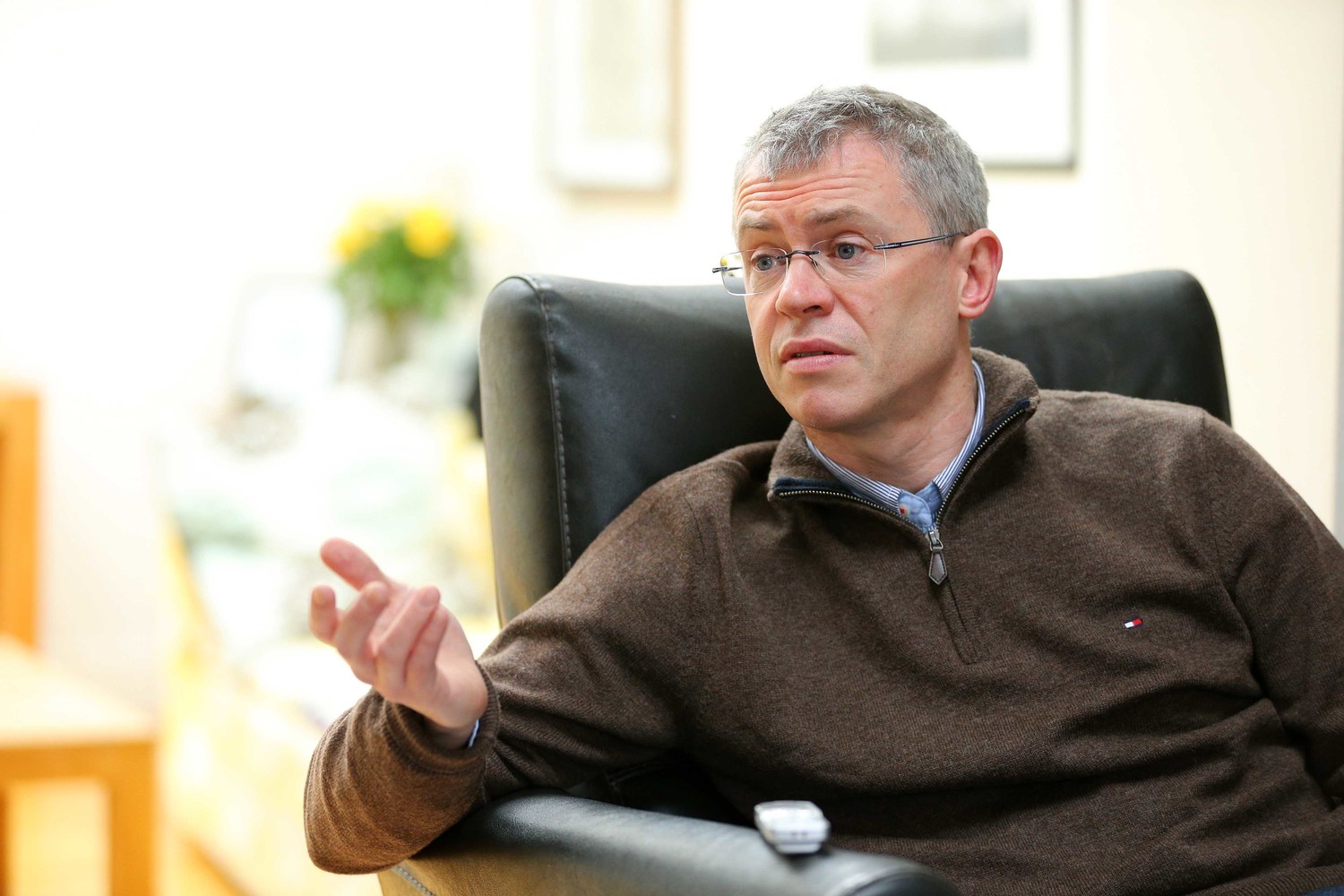 The Claire Byrne Live show is produced by the RTÉ current affairs department, staffed by experienced journalists and researchers who spend their week assessing the topics of the day and how they can find a way to cover them uniquely, compared to the rest of the broadcaster’s considerable output across radio and television.

So, with all of that in mind, to set aside the multiple concerns and issues that arise on a daily basis on Covid alone, in order to discuss the future constitutional arrangements on the island, is an editorial decision that would not have been taken lightly. To commit to the programme, there would have been dozens of meetings leading right to the top of the organisation itself. In her submission to the Future of Journalism Commission, RTÉ’s Director General, Dee Forbes, spoke of the ability of the broadcaster to “bring us all closer together”. From a northern perspective, Monday night’s programme certainly achieved that.

And, overall, it was a decision that paid off both for the broadcaster and, most critically, for its audience, north and south. Again, from a northern perspective, the show did underline the differences in understanding that still exist on the island, 23-years after the Good Friday Agreement, so widely mentioned throughout the two-hours despite the fact that the SDLP and Ulster Unionists were excluded.

RTÉ knows only too well that its Ulster audience has a very different cultural and political perspective. The debate on constitutional change has been building in the North over the past number of years. DUP leader, Arlene Foster, herself made a significant contribution when she told a BBC documentary that she would leave Northern Ireland in the event of an All-Ireland. That sparked days of discussion and debate on the shifting political sands. Today, Arlene has repeated to RTÉ that she couldn’t feel at home in an all-Ireland.

Until now, none of our public service broadcasters have thought the debate merited such attention as we witnessed last week. The BBC has not dared to go there across any of its multiple daily or weekly current affairs shows, on radio or television. When it does engage, it’s generally done elliptically, or in a 'down and dirty' fashion, depending on the audience demographic it’s seeking to attract. UTV, now under ITV ownership, no longer has a recognisable current affairs platform.

On Monday night, RTÉ’s editorial board decided it was time to take the debate on. But it was clear right from the opening that the format was primarily designed for a southern audience, which, of course, is understandable.

Choosing to set up the discussion through the emotive prism of flags, emblems and anthems was one straight out of the peace process playbook. Many watching from the North must have be immediately tempted to turn off, so versed in the pain caused by listening to the same painful debate in the several years that followed the Good Friday Agreement. It was as if some old editorial sage in RTÉ, drawing from experience of time spent in the north, thought it a great idea to hook in the southern audience by threatening to rip up the national flag, tear up its constitution and rewrite the national anthem.

Or maybe they thought it was the bone that would not only see Leo and Mary Lou removing their face masks, but throw off their jackets too so they could come out swinging at each other. Either way, the two leaders refused to walk onto the punch, which was a pleasant surprise for the northern audience so used to flags and emblems being the spark that usually sees politicians get on their clown suits for a full-on pantomime.

Indeed, the discussion between Mary Lou and Leo was probably the most important single contribution to the United Ireland debate that we’ve witnessed on television. It was sober, reflective, understanding and only once Leo, when he got the year of the Good Friday Agreement wrong, appeared unsteady. They were both surefooted, much to the surprise of just about everyone who’s witnessed their public jousting since the last election.

In one of his final missives from the North before he returns south, RTÉ’s Northern Correspondent, Tommie Gorman wrote that while the concept of a United Ireland “may make for interesting opinion polls and infotainment programmes the truth is sobering”. It was almost as if Tommie was aware of the plans for Monday night.

Because when Claire Byrne introduced Gregory Campbell, the show threatened to leave the road so carefully laid by the leaders of Sinn Féin and Fine Gael. Those of us who watch and listen to Gregory on the BBC, know his banter well. His most recent contribution to public discourse was to criticise the weekly ‘Songs of Praise’ television programme for being the BBC at “its BLM (Black Lives Matter) worst”.

To be fair, BBC presenters are very adept at handling Gregory and only on some of their output is he allowed to resort to the Millwall tactic, as the SDLP’s Claire Hanna describes it, of “everybody hates us and we don’t care”. On Monday, Gregory was preparing for a full-on Punch and Judy that he revels in on the airwaves in the north, but it wasn’t that kind of show.

Andrew Trimble was a revelation and a particular relief for those who want to hit the brakes on the debate. Those in the studio at the time heard a story of a new generation not wanting to engage in binary politics. Those who know Andrew’s story know that his family are unionists. Indeed, his grandfather was an RUC officer who helped train thousands of recruits who passed through the force’s Enniskillen’s training centre. Andrew was born a unionist, but has moved to the critical centre ground which will determine the Border Poll when it comes. That is the story many of us heard in the North. But in Dublin, he was representative of a generation who don’t want to be pushed into a decision. Andrew represents a generation of Protestants and nationalists who have turned their backs on the politics of their parents. But that clearly wasn’t what the producers of the programme heard when they booked him.

Jamie Bryson, who the BBC has stated to introduce as being “linked to the UVF in East Belfast”, was provided a platform while the signatories to the Good Friday Agreement, the Ulster Unionists and SDLP, were denied. But then again the UUP and SDLP are not sounding warnings of Loyalist violence, which many in Dublin seem all too keen to embrace in order to avoid the debate. Given that the Taoiseach, the Tánaiste, Mary Lou McDonald and the DUP had all agreed to take part, why did RTÉ feel it needed someone without a mandate for such a serious debate?

The answer soon became clear. That old editorial devil called balance. It seems for some at Montrose that the North should really only ever be viewed through the prism of sport and only then as an absolute last resort. So wheel on GAA All-Ireland winner, Joe Brolly. There had to be a rational reason to book Joe for a show designed to set a new standard for debate on the constitutional future of the island but here again, his contribution only served to highlight the ground that RTÉ’s editorial decision makers have to make up. Viewers in the North have heard everything Joe said about the DUP a hundred times in the past week alone. Indeed, the Stephen Nolan radio show basically serves up a version of the same claim and counter claim from its audience each and every morning. The DUP has been accused of much worse than anything Joe alleged during his brief moment in the spotlight, yet it was decided that he’d gone too far and without Gregory to respond, Joe had to be put out of the room. Was RTÉ taken aback by what Joe said? Really? Why not keep Gregory in the room so that he could respond to anything Joe may say? If you knew nothing about his politics or background, a quick glance at Joe Brolly’s most recent newspaper column would have given the researcher a good idea of what he might have to say on the topic. Being removed from the room tells Joe that he can say what he said any day of the week on the airwaves in the north, but RTÉ wasn’t ready for it.

Monday’s Claire Byrne Live will not be remembered for the contribution of the Taoiseach, who surrendered up the prime time slot to Leo. It may be remembered most for Joe Brolly, which would be a huge disappointment given what could become an historic contribution to an issue that will no doubt define many years to come. Journalists, producers, news organisations and broadcasters on both sides of the border would do well to reflect on where it leaves the debate and our vital role in covering it. Politicians should no longer be able to go unchallenged. It’s not a topic to be treated as infotainment. The audience, whether it tunes in or not, is not binary but it is all-island. It’s complex and challenging stuff we’re talking about.

The Good Friday Agreement is the North Star for the debate. But almost 23-years after it was agreed, Jamie Bryson says he’s determined to bring it down. It’s unknown how widely that view is shared within Unionism. Joe Brolly is fed up with the sectarianism of the North and Gregory can’t bring himself to accept the realities of the demographics. Sinn Féin know well they can’t lead the campaign for a United Ireland.
In the North, we’ve been here before. We’ve had the debate and made the compromises. That’s the only reason we can have this debate in peace. RTÉ broke new ground on Monday night, the baton has been handed to the public service broadcasters, BBC and UTV, in Northern Ireland. Can they build on the solid foundations laid by their southern counterparts?