Homeless migrants missing out despite 'Everyone In' pandemic policy 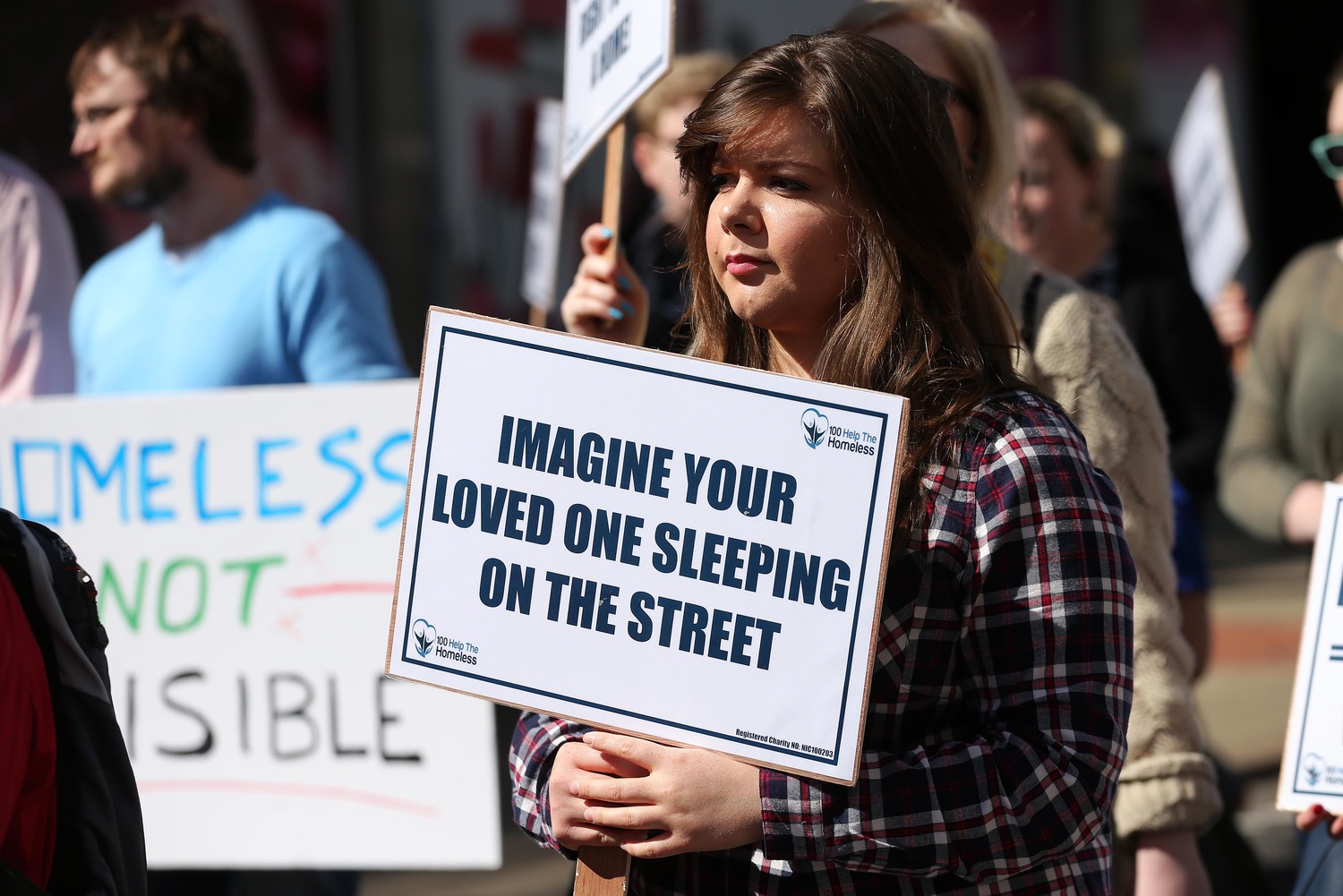 A public protest about homelessness in Northern Ireland. Photo taken in 2015 by Kelvin Boyes, Press Eye.

CHARITIES working with migrants in Northern Ireland have said that some of their homeless clients have not been able to get support from the Northern Ireland Housing Executive (NIHE) during the pandemic.

This is despite a NIHE commitment to provide temporary accommodation and support to all those rough sleeping, regardless of nationality or immigration status, under an approach known as 'Everyone In'.

Some people living in Northern Ireland are not entitled to housing or homelessness support because of their immigration status. This can include those on work permits, spouse visas, international students, and asylum seekers, as well as EU citizens who are out of work or have moved here after 1st January 2021.

In late March 2020, as part of a UK-wide effort, the NIHE announced that they would assist all homeless individuals with temporary accommodation during the Coronavirus crisis, regardless of eligibility.

The NIHE approach, taken in conjunction with the Department of Communities (DfC) and the Department of Health (DoH), was widely hailed. Rough sleepers, whether originally from Northern Ireland or elsewhere, were soon off the streets.

In figures provided to The Detail, the NIHE said that since March 2020 they have provided temporary accommodation to 44 individuals who would not normally be able to access support due to their immigration status.

All are thought to have been rough sleepers or at risk of rough sleeping, the NIHE said.

By 1st February 2021, there were 21 such individuals in receipt of temporary accommodation.

However, some people have struggled to get support.

While these particular individuals had not been rough sleeping pre-pandemic, the pandemic had led to them becoming homeless, including from a breakdown in their housing situation, or no longer being able to sofa surf or stay with friends.

Liz Griffith, a board member of Flourish NI, a charity supporting individuals impacted by human trafficking, said the NIHE declined to help a victim of trafficking facing homelessness last November.

Ms Griffith said the man is an officially recognised victim of human trafficking and has an ongoing serious health condition.

When Flourish NI contacted the NIHE to secure temporary accommodation for the man at risk of homelessness, they were told that he had to be 'verified' and be previously known by the NIHE, and so they wouldn’t accommodate him.

“Our argument has been that he is vulnerable, because he is a victim of trafficking, because he is homeless, and because of his health condition,” Ms Griffith said, adding that it was disappointing that he couldn’t be housed by 'Everyone In'.

The Detail requested figures on how many people had been refused accommodation, however the NIHE said it “does not record information on the number of people who apply for temporary accommodation".

Ryan Doherty has worked with refugees, asylum seekers and the homeless in Belfast for the past eleven years.

However, when Mr Doherty tried to support at least three people to get housing in the first months of the pandemic, all were denied help.

One individual, a homeless asylum seeker, had to leave his accommodation when the pandemic hit. While he originally stayed in a backpackers hostel, it was a shared room and was not suitable due to the person’s mental health problems and the risk of contracting Covid.

Another individual, also outside of the asylum system and in the process of trying to get back into the system, was staying with a friend, but was made homeless.

Mr Doherty says the two individuals were eventually told the same thing, that there wasn't any space and the NIHE will put them on a long list. One was told to go back to Homeplus, a small charity that Mr Doherty worked for at the time, and was told to seek help with accommodation from them.

In an email to a DfC member of staff, seen by The Detail, Mr Doherty outlined these cases of the named individuals. The member of staff said they would be followed up with the NIHE. They never were, said Mr Doherty, and so he stopped trying to get support from the NIHE, as he felt he was “wasting his time”.

He said he couldn’t “in good faith” tell migrants facing homelessness to approach to NIHE after that, “because what’s the point in them ringing up to get nowhere?”

A spokesperson for the NIHE said that they were “unaware of the specifics in this individual case but we will seek to ensure that temporary accommodation is provided where applicable".

Such issues are not isolated to Northern Ireland. The homeless charity Crisis described the support being offered to people with ‘no recourse to public funds’ (NRPF) as “increasingly patchy and inconsistent across the country”.

A report into English Local Authorities responses to 'Everyone In' found that the UK Government had not defined the terms such as ‘no recourse to public funds’ or ‘rough sleeper’, and that this “lack of clarity has contributed to confusion around support options” as well as to “a lack of clear pathways for (self)-referral".

The report noted that “councils have taken varying positions on the question of whether homeless people (NRPF or otherwise) who are not ‘verified’ rough sleepers should be accommodated through the pandemic response".

Major housing bodies, charities and the Labour party have called for ‘no recourse to public funds’ rules to be suspended during the pandemic or scrapped entirely.

The UK Government has so far not heeded such calls, maintaining that there is support available to those with ‘no recourse to public funds’.

The NIHE’s policy of providing temporary accommodation for migrants at risk of rough sleeping during the pandemic currently runs until 31st March 2021.

£290,000 has been allocated by the DfC for this purpose, out of the over £7.3 million allocated towards the NIHE’s homelessness response. Future budgets for March 2021 onwards are currently out to public consultation and have yet to be agreed, a DfC spokesperson said.

The NIHE has previously noted “legislative change would be required to allow the NIHE to assist in such circumstances” post-pandemic, and that work has commenced with the DfC on this issue.

However, when asked what progress has been made on this front, a DfC spokesperson said that while housing generally is a devolved matter in Northern Ireland, “the constraint on the provision of homelessness assistance for people from abroad who are ineligible for housing assistance is in immigration legislation, which is not devolved and the responsibility of the Home Office, not the NI Executive or Assembly".

Athi Silevu of Housing4All, who advocate for asylum seekers, expressed dismay at the DfC’s response and said her group is calling for “political will and fresh thinking – not more excuses for inaction”.

"In September and November we held two meetings with the then housing Minister Carál Ní Chuilín. She stressed she wanted to do more for people in the asylum system experiencing homelessness."

Ms Silevu said that her group has previously presented research to the NI Assembly on issues faced by those in the asylum system here. Theses issues – homelessness, mental health, and poverty – have all taken on wider public significance since the start of the pandemic.

“It would be nice if those policy makers could take just one minute out of their busy day and just imagine what they subject people to. Before putting a signature on a policy, think of 'if it was me or my family?'”, she said.