"In Palestine the familiar issues of killings, raids, riots and arrests persist despite Covid-19" 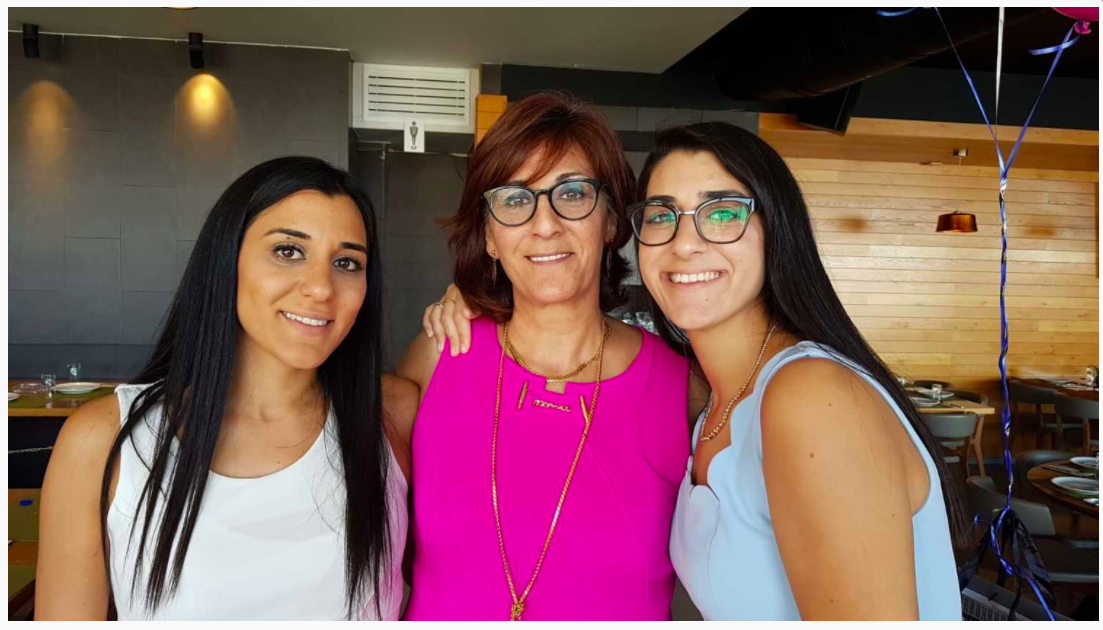 Yasmin Ayyad (far right) is a journalism graduate from Birzeit University in the West Bank. She is pictured here alongside her sister and mother.

SINCE the Covid-19 pandemic first hit Northern Ireland, some members of the public have argued that Stormont Ministers have, at times, put politics above public health.

However, in my home country of Palestine, the consequences of internal political division, along with the military occupation, have been fatal during this pandemic.

The Palestinian National Authority declared a state of emergency after the announcement of its first coronavirus case, which was recorded at the Angel Hotel in the West Bank city of Bethlehem on March 5, 2020.

Just one week later, the first person to be killed, as a result of the political situation, during Covid-19 was shot by an Israeli soldier.

He was 15-year-old Palestinian boy, Mohammad Hamayel, from Baita Village near Nablus. He died in hospital.

Another two Palestinians were killed on May 13. Mahmoud Younis was shot dead at the entrance of Tel Hashomer hospital in Tel Aviv when he was on his way for a psychotherapy session. The 26-year-old was suffering from mental illness and was undergoing treatment for epilepsy.

A 15-year-old Palestinian boy, Zaid Fadl Qaisia, was shot dead on the same day. He was shot in the head by an Israeli soldier during ongoing clashes in Al-Fawar refugee camp in Hebron City.

Another Palestinian, Bahaa Al-Awawda, was shot dead by an Israeli soldier after being suspected of a car-ramming attack near Beit Awwa town near Hebron city in the West Bank on May 14, just a day before the seventy-second anniversary of the Nakba war.

Palestinians mark this anniversary annually with demonstrations all over the country but this year, they spent the day in silence due to the public health situation.

For many Palestinians, this is viewed as a day of grief while for many Israelis it is celebrated as a national holiday.

This year, there were heavy clashes in several villages following Israeli military raids. People were injured and arrests were made.

Two weeks later, Israeli forces killed Iyad Hallaq, a 32-year-old autistic man, in the Old City of Jerusalem. They asked him to stop while he was walking to the Bacrieh Elwyn institute for special education, where he attended and worked.

He was shot by an Israeli police officer for ‘appearing to have a gun’. Mr Hallaq hid in a garbage room where he was eventually shot dead.

One day before Mr Hallaq died another Palestinian, a 37-year-old man Fadi Samara Qaad, was killed by the Israeli soldiers in the area of Reya Valley in the West Bank.

The military claimed he was attempting a car-ramming attack on Israeli forces but those close to him claim he was on his way to pick up his wife.

The 27-year-old, Ahmad Areqat, was accused of a car-ramming attack on Israeli soldiers but his family told The Detail that he was on his way to Beit Lahem to get his sister, the bride, and his mother from the hair-dresser to get them back home to continue getting ready for the wedding.

Instead he was left to bleed on the street until he passed away.

Riots in different parts of the West Bank continue to take place amid threats of Israel annexing part of it into its territory.

The raiding of Palestinian homes continues all over the West Bank, including East Jerusalem, where arrests of men and minors are still taking place.

Despite the Covid-19 crisis, the Al-Issawiya neighbourhood in East Jerusalem has been the target of daily raids by Israeli police. Many detainees are being released after a few hours or days but others aren’t so lucky.

According to various human rights reports Al-Issawiya has been the target of a concerted aggressive police campaign for the past 10 months with no reasonable cause.

B’Tselem, the Israeli Information Center for Human Rights, reported that they could not explain why the Israeli police has been conducting this kind of harassment operation.

On March 31, Israeli state forces confiscated food supplies that had been collected by the residents of Sur Baher in Jerusalem. This food was due to be donated to around 200 families.

This activity not only generates friction, but a large proportion of the Israeli soldiers are without the necessary protective gear and are in close proximity with residents, including women and children, which puts themselves and others at greater risk of contracting the coronavirus.

On April 2, following pressure from Palestinian Israeli Knesset members (the legislature), the Israeli Government authorized the opening of seven clinics to test Jerusalem Palestinians after a rise in coronavirus cases.

However, the Israeli authorities later closed a testing centre opened in the neighbourhood of Silwan and arrested four people.

Haaretz, an Israeli daily newspaper, wrote that the clinic was closed due to its collaboration with the Palestinian Authority.

The United Nations Office for the Coordination of Humanitarian Affairs (UNOCHA) reported that between March 1 and March 19, 2020, there were 43 housing demolitions, affecting 87 people including five donor-funded structures, in different parts of the West Bank including East Jerusalem.

The UN also reported that, following a meeting with the Israeli military authorities, demolitions in the West Bank have been suspended, but this does not apply to East Jerusalem.

On May 11, Israeli military authorities demolished a detainee’s family home in Kobar village north of Ramallah City in the West Bank.

Another problem for the Palestinian Government was the return of more than 80,000 Palestinian labourers from Israel due to officials declaring the closure for the Pessah Jewish feast, without the people being tested for coronavirus.

Israeli and Palestinian human rights organisations have called for a drastic change in prison policy to promote health and save lives, especially of prisoners who are suffering from chronic health conditions and the elderly prisoners.

There are currently 6,000 Palestinians in Israeli prisons.

As a result of the pandemic, the High Commissioner for Human Rights for UNICEF has called on governments such as Israel to release prisoners, in particular children and detainees in overcrowded detention facilities.

With Israel and the Palestinian Authority relaxing more restrictions in their areas, it allowed the Israeli forces to arrest even more Palestinians, especially during Black Lives Matter and women’s rights demonstrations.

Almost 200 children were arrested in the month of March.

Sahar Francis is a lawyer and the executive director of Addameer Prisoner Support and Human Rights Association.

She told The Detail how Israel has released 300 Israeli criminals, keeping them under house arrest, while ignoring the plea to release Palestinian minors from Israeli prisons and detention centres.

Mrs Francis added: “At the outset of the pandemic, after simple phone calls were banned, we were able to introduce the right of prisoners, both minors and adults, to contact their families and lawyers.”

One Palestinian prisoner, Nour Al-Barghouthi from Al-Abboud Village just west of Ramallah city in the West Bank, took his own life in Al-Naqab prison.

The 25-year-old was suffering from severe mental health issues after his last interrogation a year ago at the Moscavia detention centre.

A 21-year-old Mohammad Majed Abed Al-Majid, a detainee at the Moscovia detention centre, from Der Al-Sudan Village, was tested positive with coronavirus on April 24.

He was arrested on April 22. The Israeli Authority moved him to self isolate in Al-Ramleh prison after he tested positive and they extended his arrest for an extra eight days.

The Palestinian prisoners have been pressuring for greater access to good hygiene products, Covid-19 testing kits and for prison guards to wear PPE.

Prison cells suffer from poor ventilation and overcrowding, with less than three metres on average per prisoner.

The current suspension of lawyer and family visits to the prisons has resulted in inmates feeling an even greater sense of isolation.

There is still a relatively low number of Covid-19 cases in Palestinian territory, despite the weak and under-funded health system.

The Gaza Strip has been the main concern for the government since it’s the most densely populated region within the State of Palestine, with almost two million people living there, sieged from the outside world.

In another part of Palestine residents in the town of Abu Dis, which is classified as Area B (under the Palestinian civil control but total Israeli security control), have been in fear of the virus, especially after the government announced four new cases in Bethany, the neighbouring town.

Abdullah Abu Helal, a doctor and resident of Abu Dis, expressed his concern about the lack of a hospital for the town which is home to 50,000 people.

He told The Detail: “The community is being served by just one small emergency department, with four beds and one delivery room.”

Such facilities are common throughout the Palestinian territories and they are insufficently prepared to handle an onslaught of Covid-19 patients.

The world has had to get used to a ‘new normal’ because of the coronavirus. In Palestine the familiar issues of killings, raids, riots and arrests persist despite Covid-19.

Receive The Detail story alerts by email
Media decline is damaging deeply divided societies – can we 'build back better' after Covid-19?
Call for Sinn Féin to apply its southern housing policies to west Belfast “housing crisis”