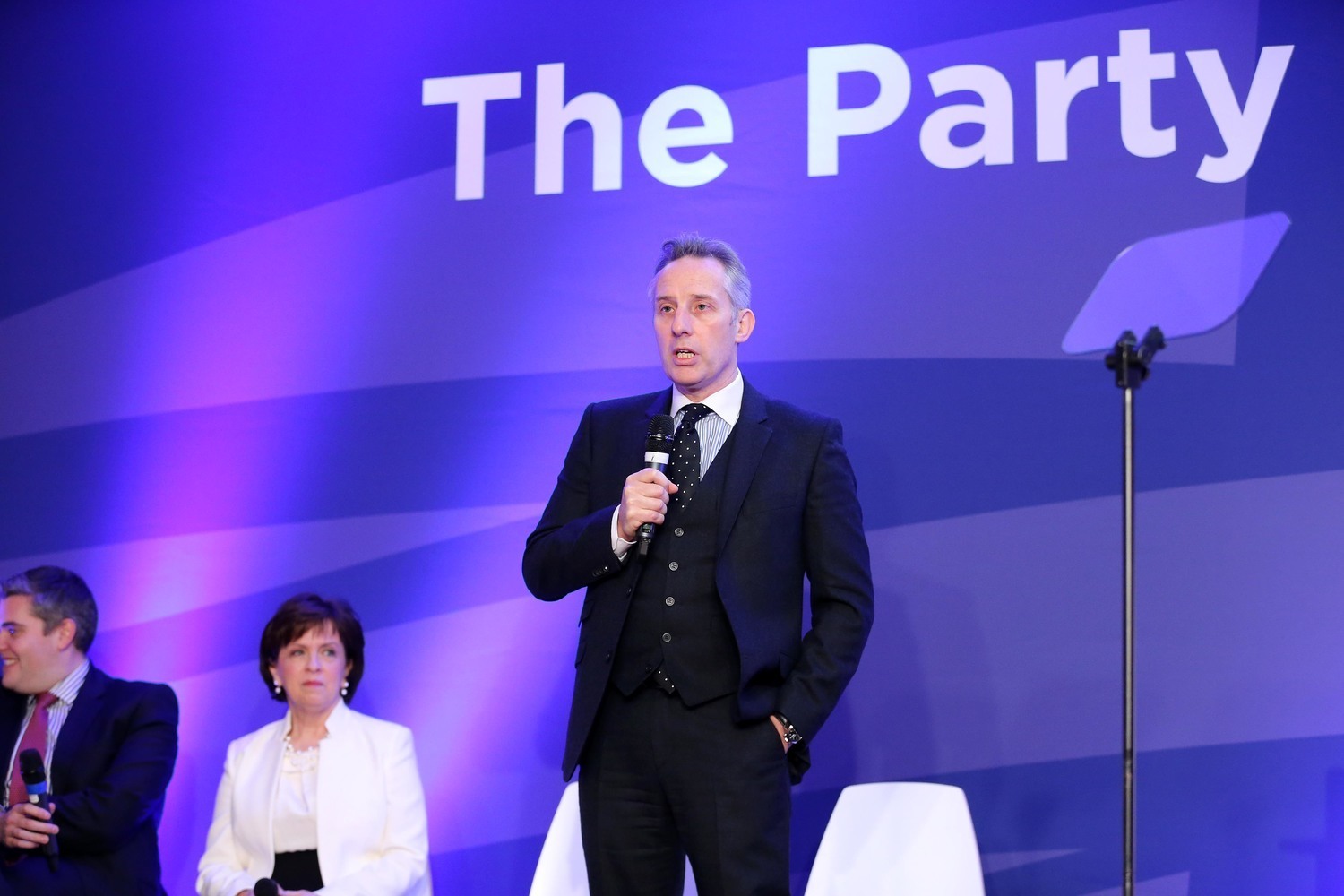 LONDON property magnate Michael Gross has confirmed his company made a £5,000 political donation to support the DUP's Ian Paisley Junior, The Detail can reveal.

Information on money given to Northern Ireland political parties was published today for the first time following a change in the law last week which lifted a ban on identifying donors.

The information published this morning shows that Gross Hill Properties Ltd made the donation of £4,999 to the DUP’s North Antrim Westminster Association in July 2017. Ian Paisley Junior is the DUP's Westminster MP for North Antrim.

Gross Hill Properties was founded by London born property magnate Michael Gross who still has a controlling share in the company which has a multi-million pound global property portfolio.

In an interview with The Detail Mr Gross confirmed he made the donation to support Ian Paisley Junior.

He said: “Ian has been a long time family friend of mine and he supports the things that I believe in. I supported a number of constituencies of people I was friendly with and people who share my views like on Brexit or the Middle-East and other things.

"I support people I like and that I respect. In this particular case that is Mr Ian Paisley Junior. I wanted to make sure he was elected, that’s called democracy.”

Gross Hill Properties has also donated almost £60,000 to the Conservative Party within the last year.

Responding to questions on the donation, including the donor's confirmation that the political funding was aimed at supporting Ian Paisley Jnr, the DUP said it welcomed the greater transparency over political funding for parties and confirmed it had complied fully with the new legislation.

There is no allegation of any wrongdoing in relation to the donation, though the figures released today have attracted attention as they represent the first such insight into political funding in Northern Ireland.

The release of the financial data on the funding of parties follows longstanding objections to the secrecy surrounding political donations here.

The UK government refused to backdate transparency to 2014, as was possible under legislation previously tabled by the Alliance Party.

The failure to backdate means there is no information publicly available on the origins of the £435,000 donation that the DUP received from the Constitutional Research Council (CRC) during the Brexit referendum campaign. There is no public information on how the CRC is funded, though the DUP and the CRC have previously said they adhered to all the rules relating to such donations.

Mr Gross said in his interview with The Detail that he did not donate any money to the Constitutional Research Council.

The new data published by the Electoral Commission today relates to money given to political parties in Northern Ireland between July and December 2017. 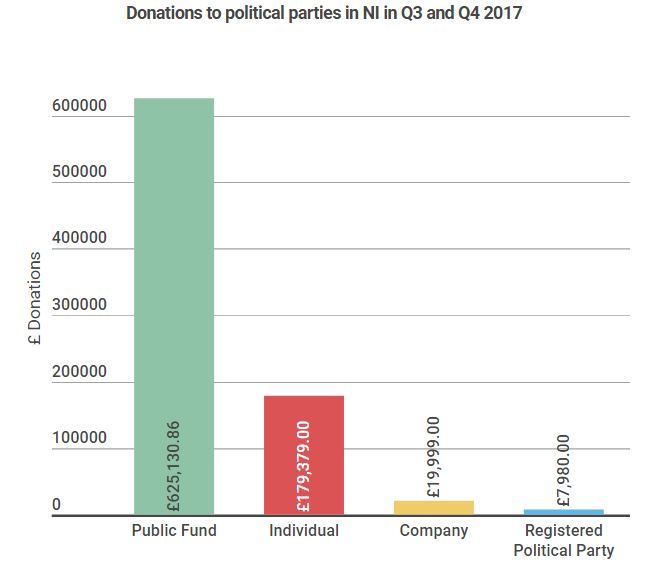 Data provided by the Electoral Commission

In total £832,489 was given to Northern Ireland political parties during this period. The vast majority of the financial support came from government funding received by parties at Stormont and Westminster, but is categorised as donations.

Other information published today shows that Sinn Féin politicians donated a portion of their salary to the central party between July and December 2017, totalling £167,379.

People Before Profit MLA Gerry Carroll donated £10,000 to his own party. The SDLP received £2,000 from one of its local council representatives. 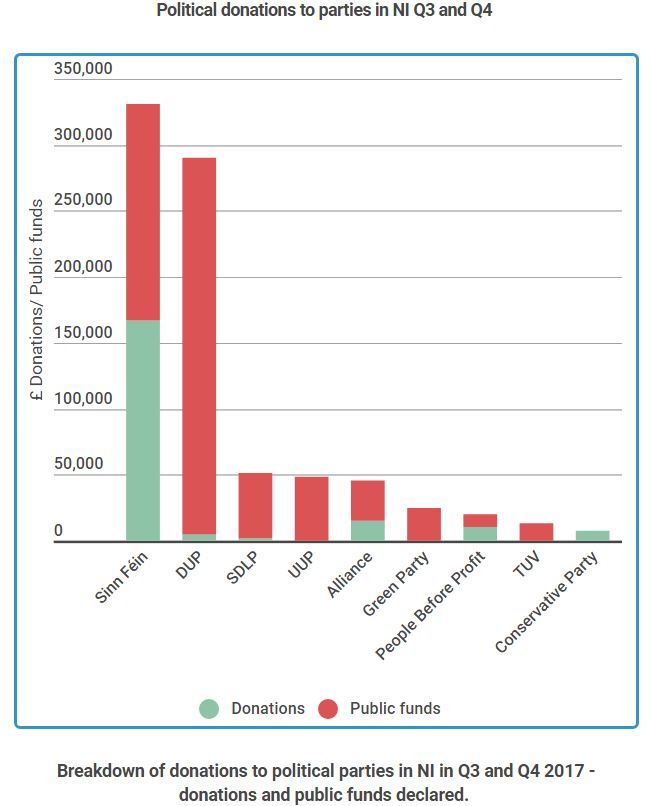 Data relates to donations of over £7,500 to parties or over £1,500 to smaller 'accounting units' within parties

Meanwhile, the Alliance party received £15,000 from the Joseph Rowntree Foundation.

The information on donations to political parties published today relates to donations of over £7,500.

As previously reported by The Detail, the head of the Electoral Commission in Northern Ireland has queried whether the threshold of £7,500 is too high and many donations to parties may fall below that threshold.

The threshold for publishing donations to accounting units is significantly lower at £1,500.

London property firm Gross Hill Properties donated £4,999 to the DUP’s North Antrim Westminster Association on July 3 2017, which represented a donation to an accounting unit, rather than to a central party.

The company's annual accounts for 31st March 2017 state: “Since the year end we have been active in the acquisition market and have live bids in the market in excess of £40million. The value of our property portfolio is £5.4million.

"The valuation of the properties under management in the Group as at the balance sheet date was in excess of £600million comprising lettable space of 350,000 square feet let to 26 tenants.”
In relation to the donation, DUP spokesman said: “The DUP welcomes the increased transparency and supported such. This brings us into line with the rest of the United Kingdom in all but the acceptance of foreign donations. We comply fully with the law governing donations to the Northern Ireland political parties. With regard to Brexit referendum, the DUP voluntarily published details about that donation in the same way which the Electoral Commission would.”