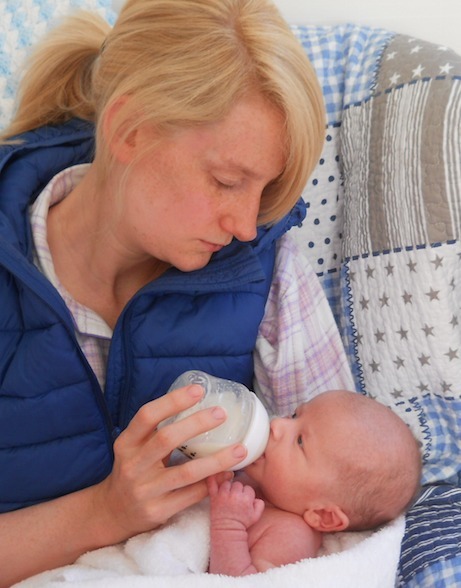 Lindsay Robinson and her son Reuben

Lindsay Robinson had hoped to breastfeed her first child. However, she ended up bottle feeding Reuben, who is now three. Lindsay was later diagnosed with post-natal depression, which she believes impacted on her ability to breastfeed. Here is her story.

"I hadn’t had the most straightforward pregnancy. When I look back I realise I actually had ante-natal depression.

Part of my mental health issue was that when I looked at Reuben I struggled to believe he was my baby. I didn’t get a pregnancy bump, I didn’t put on very much weight and there wasn’t clear evidence on the scan that Reuben was growing. There were a lot of questions but nobody really knew the answer.

By the end of the pregnancy I did not know what to expect when Reuben was born - I began to doubt I was pregnant.

When Reuben was born the midwife asked me was I planning to breastfeed and I said yes - unbeknown to me my mental health was already very fragile.

Reuben was born at lunchtime on the Friday and we had been trying breastfeeding all that day and all through the night. Other people were sent to help me breastfeed so that made it even worse - I felt like a huge failure. I hadn’t slept because they kept coming back to try, I was so petrified. I couldn’t cope anymore and decided I was going home. It was as much to do with my mental health as the breastfeeding.

A lovely midwife, who could clearly tell that I was stressed, suggested that it was possible to try a little bottle milk and continue to try to learn the technique of breastfeeding.

I felt on one hand shame – why could I not do this? Why do I have to give the baby a bottle? And on the other hand maybe it will make it easier - maybe he will be okay on formula. She brought a little bottle and I will never forget he began to suck, suck, suck, literally chug it down and I felt finally I am doing something right. One little part of the jigsaw seemed to be coming together and it was actually a huge relief. 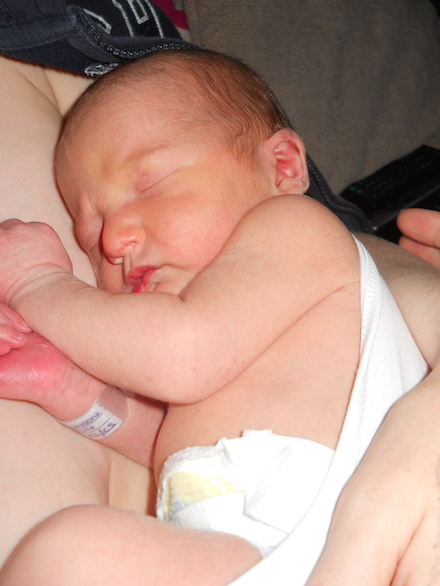 I continued that day learning the technique of breastfeeding and I really wasn’t getting anywhere. I left hospital that night and assumed I would continue to use the bottles and try and practice breastfeeding.

Looking back now I was mentally in a black hole and I think that made it much harder for me to breastfeed. Within the first week I moved from trying to breastfeed, which never established, to deciding with my husband we are just going to formula feed. It was a positive decision because it was the best thing for me and for us as a family.

I was having a hard time and spoke to my health visitor and GP. Both of them said you’ve had a new baby, get more sleep, go out for a walk, go out for a coffee everything will be fine and settle down.

I took them at their word. I began to say to myself ‘you have just missed the mum gene Lindsay’, ‘you’re a useless person’, ‘you’re never going to be the mum you thought you’d be’.

I would have been very weepy at times. I cried an awful lot, particularly in secret as I was on my own with Reuben in the house. Other days I felt very numb. I became hugely obsessive and had obsessive thoughts about myself, Reuben and our health. I believed Reuben or I was going to die.

I became anxious about everything; sometimes I could not even face leaving the house. For the first year I had a fear a midwife or social worker would knock our front door and say ‘Mrs Robinson I have come to get the baby because it doesn’t actually belong to you, we made a mistake we’re going to take him to his real mum’.

I used to have his wee bag packed because I thought well if that happens that will explain the way I feel and it will be great because Reuben has a mummy that loves him, a mummy that he’s meant to be with and it will make sense of this mess I have got myself into.

By the time Reuben turned two I was really ill, I had cried many times and lay on the kitchen floor and told my husband ‘I just want to die’ - ironically that was not an option for me because I did not want Reuben to ever feel like I had made that choice because of him.

One day I was looking through the phone and could see blogs on websites which housed lots of stories of how mum’s had coped with motherhood. Their stories began to hit home because they were saying those awful things that I had hidden. I devoured them and read them over and over. It felt like there was hope in them because they seemed to be saying they also felt this way but there was a name for it.

On the Monday morning I saw a different GP, I told him my story. I told him I still struggled to believe Reuben was my baby, I knew the evidence was there but mentally I could still not comprehend that he belonged to me. He listened, and he said ‘Lindsay you have postnatal depression but you are going to be okay’ and he was true to his word. From that day I started antidepressants. He phoned the mental health team here in east Belfast and for months I was down there weekly.

I could have cried; I could have kissed him. It was instant, it was like ‘this is not my fault’ I had felt for so long that this was my fault and I felt ashamed of myself. I honestly hated myself so the minute he said there is a reason you are feeling like this I just felt like there was hope – hope I could get better and hope that this would not be my reality forever.

As the months went on I began to feel better and understand the illness, I began to learn coping mechanisms, I began to write my blog, delve into the website and now provide online support for mums and dads and all of that has been key to my recovery.

My advice to other mums is that everybody’s journey is different so yours doesn’t have to be the same as someone else’s. Make the choice that’s right for you and right for your family. Talking is key, talk about what you want to do and make a plan of how you want to get there."