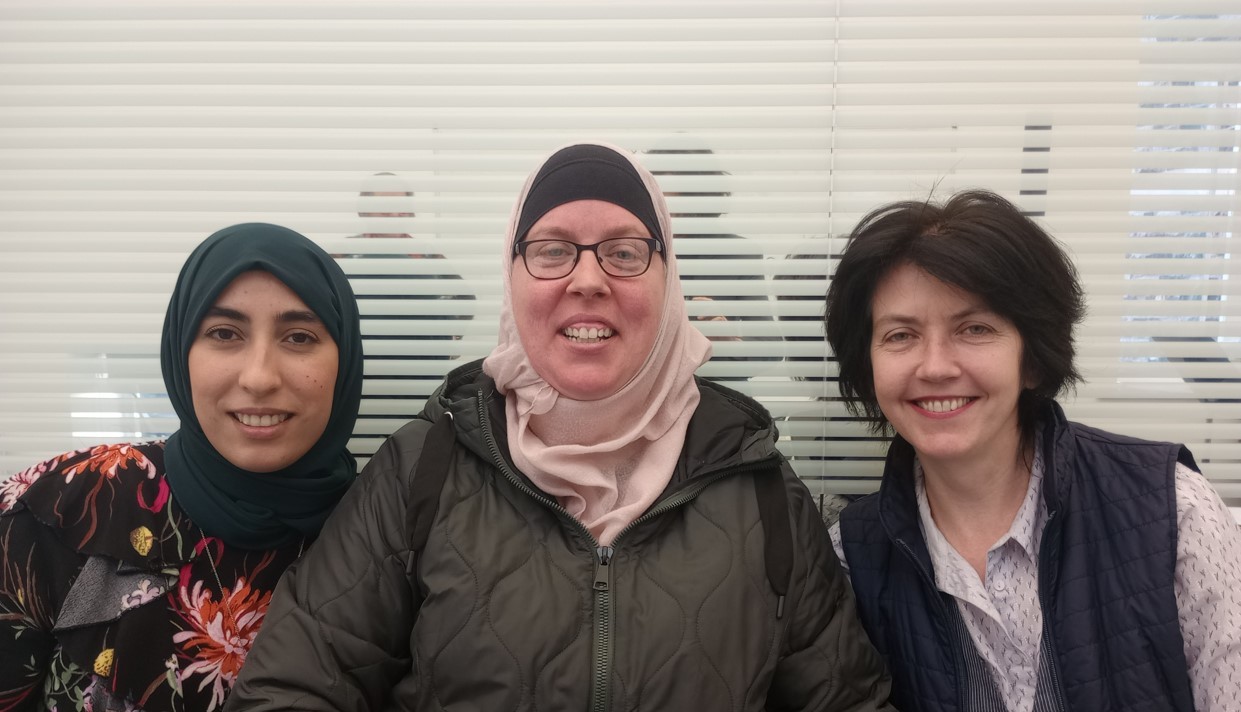 Over the last twenty years, thousands of Arabic-speaking migrants have settled in Northern Ireland. In the last in a series of articles about minorities in the north, Luke Butterly speaks to the singers and organisers of an Arabic choir which is bringing women of different faiths and nationalities together.

EVERY week, an arts centre in south Belfast rings out with the sound of women singing songs in Arabic.

The Yallaa choir - the only one of its kind in Northern Ireland - has brought asylum seekers and refugees from Syria and Sudan together along with locals and new migrants to the north.

Singers meet in the Crescent Arts Centre, close to the busy Lisburn Road, every Saturday.

Hawa Hassan, an asylum seeker from Sudan, is one of the choir’s newest members.

She has been living in Belfast for just three months.

Like many people seeking asylum, she is being housed in a hotel in the city.

“I live with people (in the hotel) from other countries, we are sharing the experience.”

Ms Hassan is a novice singer but said she was keen to learn more and meet new people.

“The life here is nice, the area is calm, quiet, everything is organised,” she said. 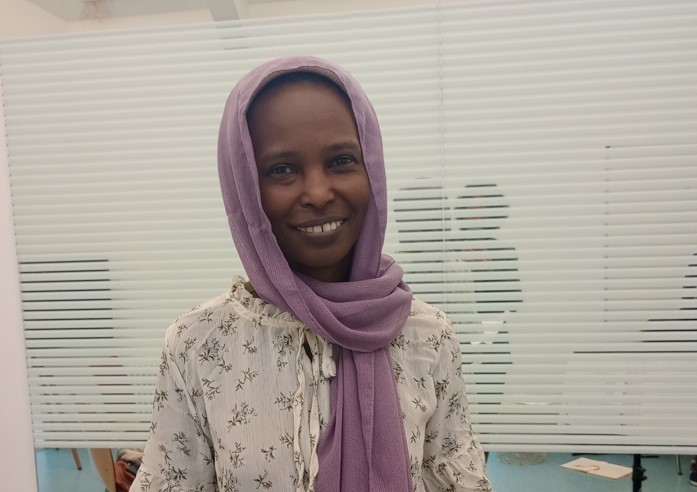 Singer Hawa Hassan at the Crescent Arts Centre in Belfast. Photo by Luke Butterly, The Detail

Choir leader Anne McCambridge, from Carnlough, Co Antrim, said some asylum seekers were initially reluctant to attend because singing practice clashed with lunchtime at the hotels.

Asylum seekers are not allowed to work, and receive hotel meals at set times.

“So if they had come to rehearsal, they wouldn’t have got anything to eat... we brought food here, as part of the rehearsal,” Ms McCambridge said.

The choir includes women from Muslim and Christian faiths.

On December 22, singers will host a Christmas concert in Belfast at arts centre 2 Royal Avenue.

The event will feature popular English and Arabic songs including ‘Jingle Bells’ and Lebanese piece ‘Layet Eid’ - both of which share the same tune. 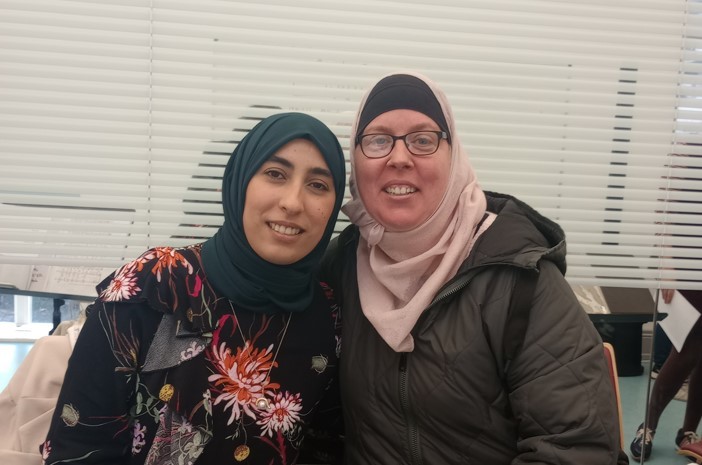 Two decades ago, Arabic was rarely heard in Northern Ireland.

However, figures from the 2021 census show that 3,627 people now primarily speak Arabic - making it the fifth most common language in the north.

Kawtar Zamani moved from Morocco to Northern Ireland in 2018 to be near her husband's family.

“Now I can see that Belfast is changing and that there is a lot of diversity,” she said.

She joined the choir despite having never sung before.

“We spend time together as a family, we learn new things about each other, you get to know new people,” she said.

“It is fun and I enjoy the time. I like to share new experiences, because I’m an active woman.” 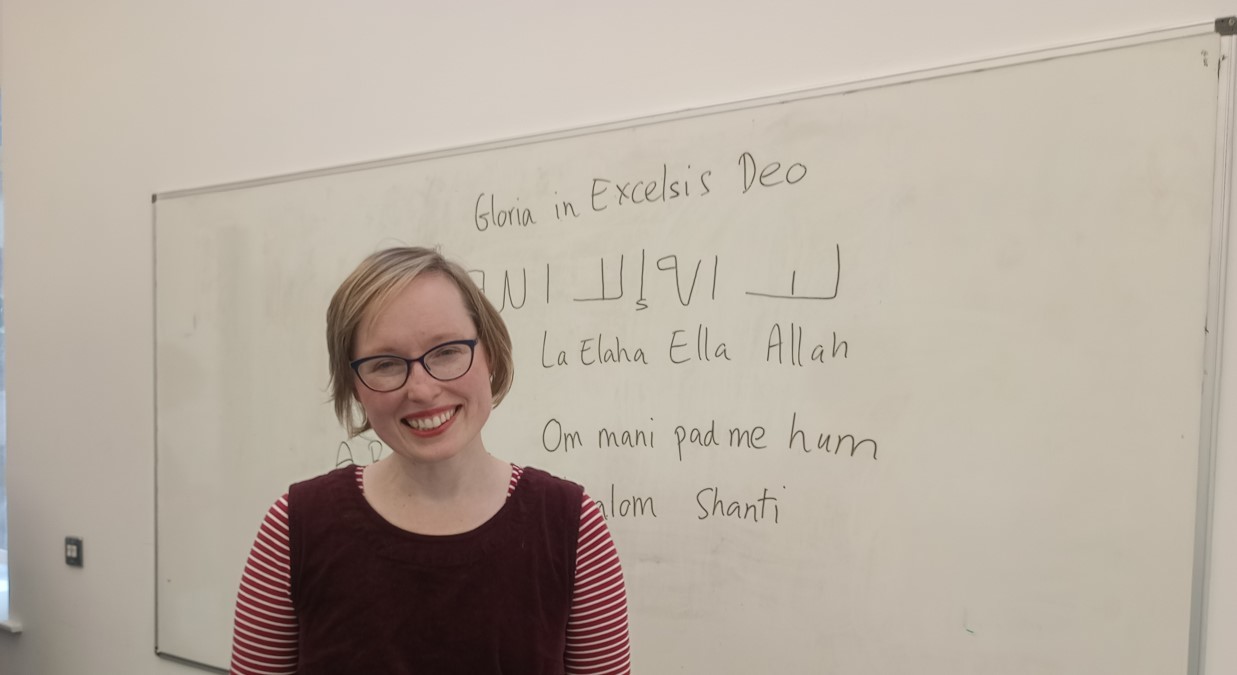 Ragdah Emad, from Sudan, has been living in Belfast for two months.

Before she got married, she was a professional musician.

“I was a singer in Sudan, with a band. Sudanese or sometimes Arabic music,” she said.

Because some of the singers are not Arab speakers, the choir uses a phonetic version of the Arabic script so every member can pronounce the words.

Hazel Workman is a native English speaker. She said a holiday to Morocco several years ago inspired her to learn Arabic.

“It (Morocco) kind of blew my mind. It was so familiar and so strange at the same time,” she said.

“It would take 70 lifetimes for me to be fluent,” she said, but added the choir offers a good way to improve.

“Learning a song is a gorgeous, fun way to pick up a language,” she said. 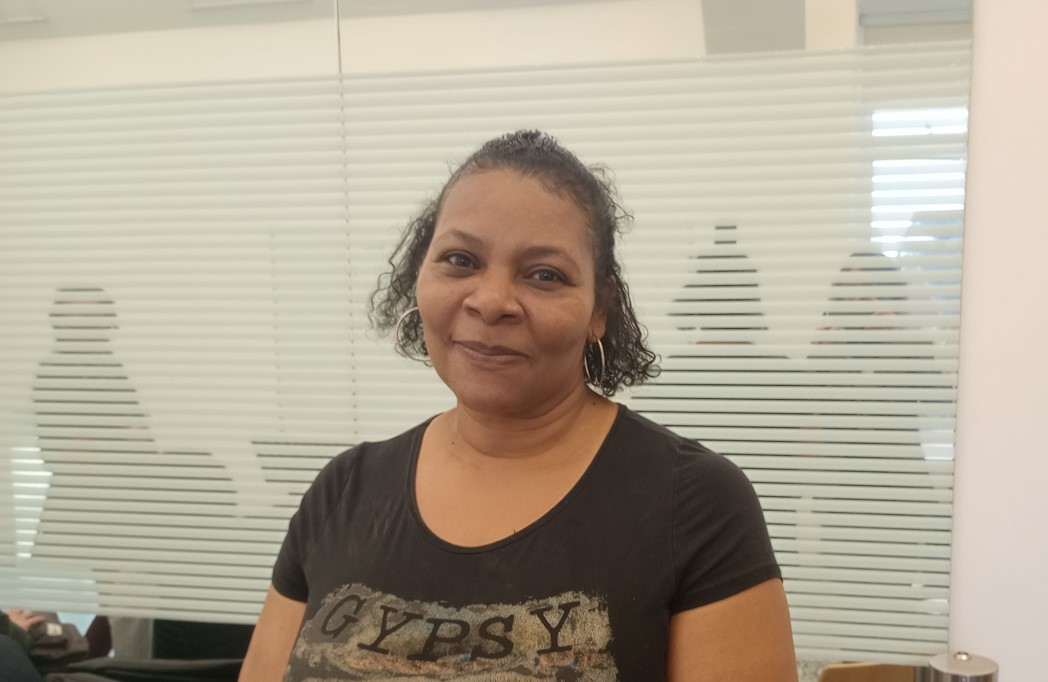 Maria Allsopp at the Crescent Arts Centre in Belfast. Photo by Luke Butterly, The Detail

Maria Allsopp, originally from the Caribbean country of Trinidad and Tobago, has only been in Belfast for four months.

She said the culture shock has “taken some getting used to”.

“People paint everyone with the same brush, they assume you are uneducated,” she said.

“They assume a lot of things about you. You can get these kind of strange looks on the road.”

Ms Allsopp has sung in church and classical choirs since she was a teenager.

“I like to sing, I sing to relax, I sing when I’m nervous, sometimes I prefer to sing rather than pray,” she said. 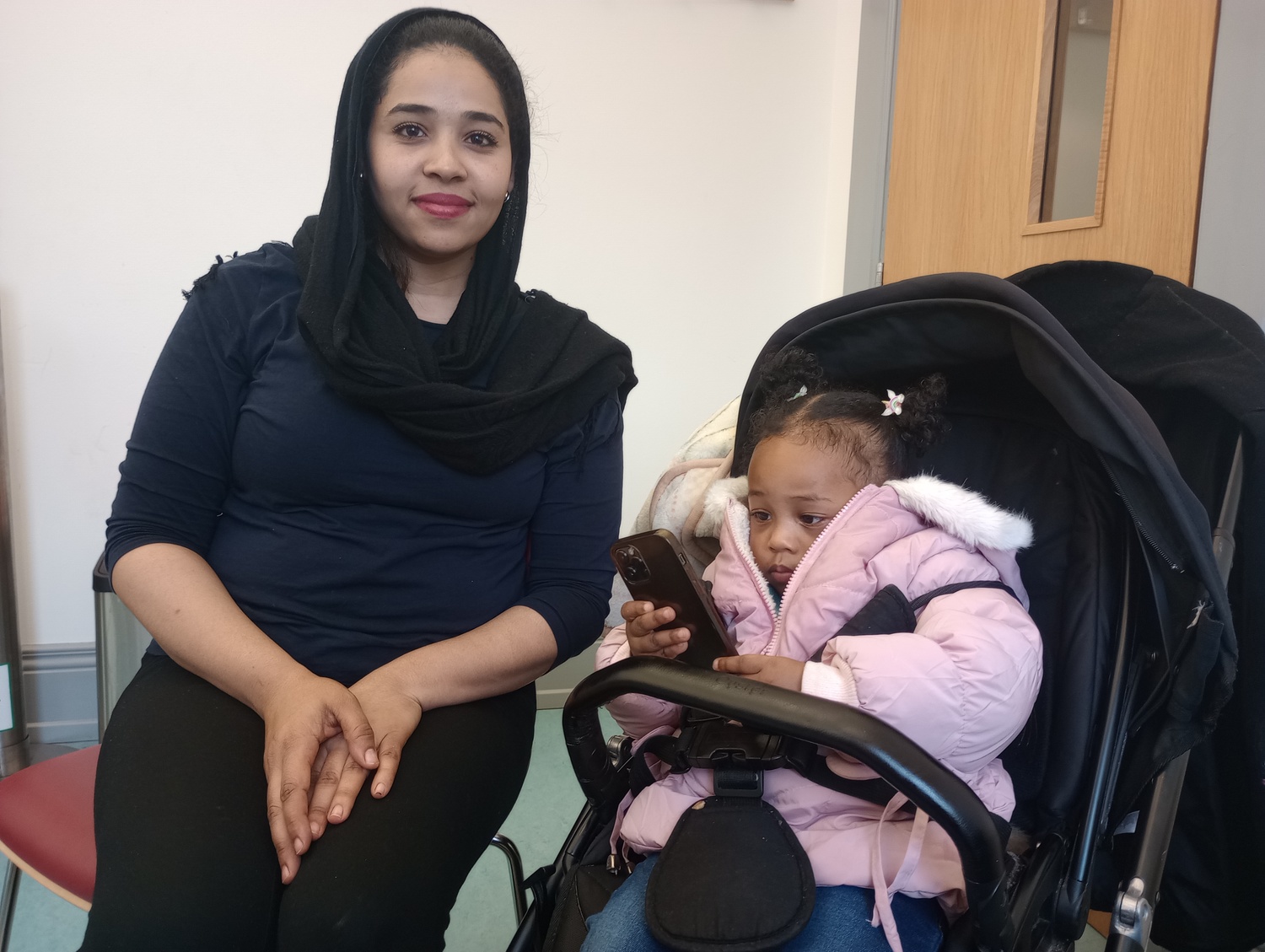 Ragdah Emad with her daughter Celine. Photo by Luke Butterly, The Detail

'There was no support’

Rym Akhonzada is the driving force behind the choir.

She moved to Northern Ireland from Tunisia in 2001, after her husband got a job at Queen’s University Belfast

“People thought we were crazy going to Northern Ireland at that time just out of the Troubles,” she said.

“My dad, god love him, was like ‘Do you know that people shoot each other in the street in Belfast?’”

Following the outbreak of the Syrian civil war in 2011, hundreds of refugees moved to Northern Ireland under a UK government resettlement scheme.

“There was no support, there was no mechanism supporting them,” she said. 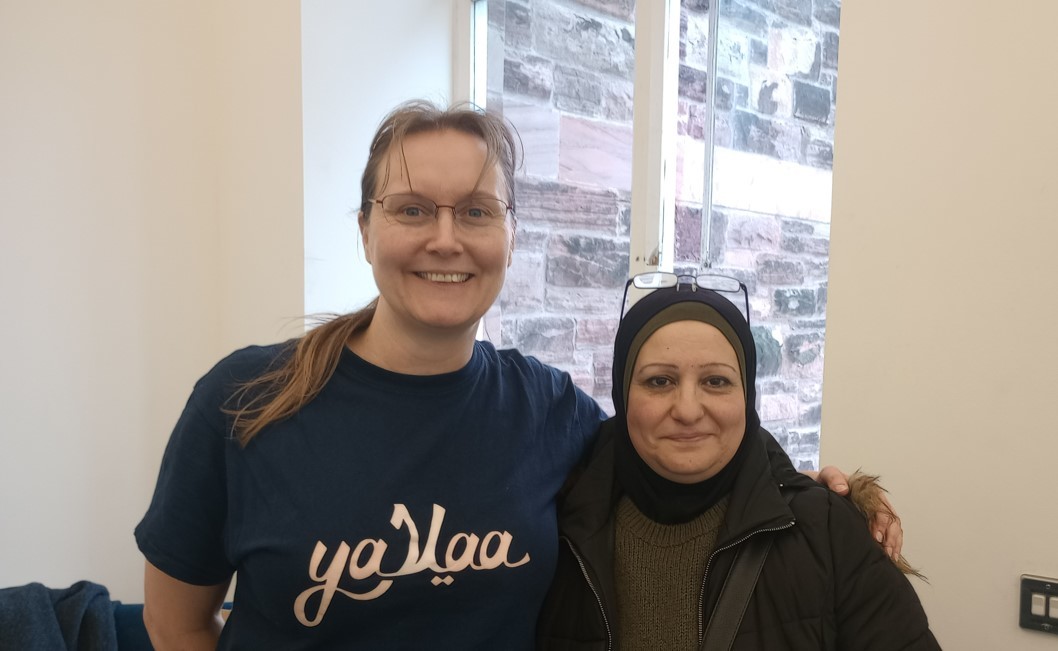 Yallaa soon expanded to take in all of Northern Ireland.

The enterprise focuses on promoting Arabic arts, heritage and culture, and empowering people of Arab origin including refugees and asylum seekers.

The enterprise also runs a cafe in a former Tesco outlet on Belfast’s Royal Avenue. Staff include refugees who have settled in Northern Ireland.

“This is how we promote Arab culture,” she said.

“We take a soft approach, we don’t go to people and give a lecture. We do it in a subtle way, a soft way.

“People in Northern Ireland don’t know much about it, and they always associate Arabs with negative things that they see in the media. And I really wanted to change all of that.

“I always think, when you talk about integration, integration happens both ways.