‘It’s 2022... women are lying on the streets because they have nowhere else to go’ 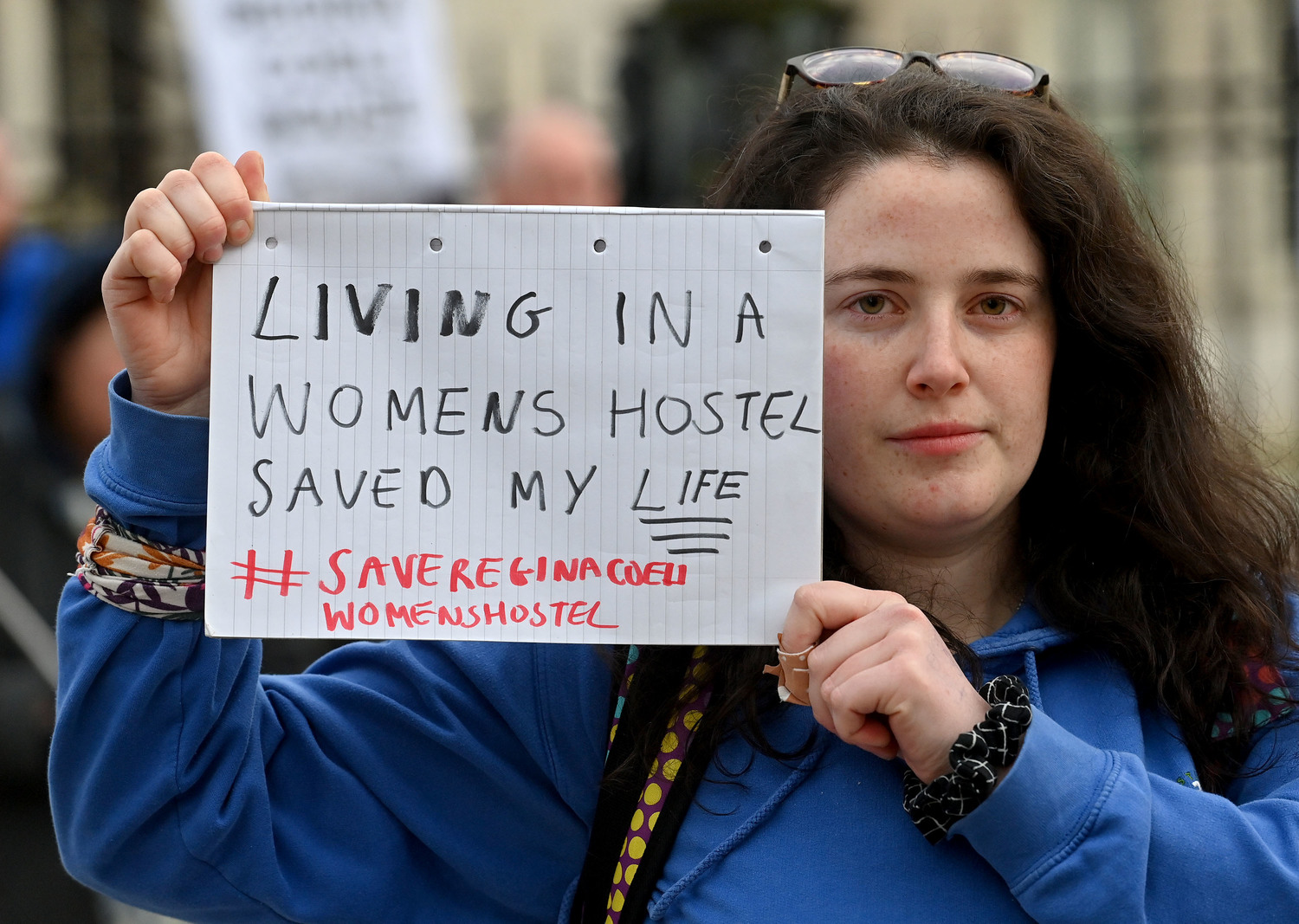 A woman at a protest at Belfast City Hall in March against the closure of Regina Coeli hostel. Picture by Stephen Hamilton, Press Eye

VULNERABLE women are being failed because a female-only hostel has still not been set up ten months after the only one in Northern Ireland closed, former workers have warned.

Following the January closure, staff stayed to help residents who did not want to leave, including those needing addiction and mental health support.

The hostel, which was run by a volunteer management committee with links to Catholic lay organisation the Legion of Mary, cared for women from across Northern Ireland and further afield for decades.

Some workers were suspended at the start of the work-in and were later dismissed.

The workers said they only ended their action because their union Unite was assured by the Department for Communities (DfC) and the Housing Executive that a new hostel would be set up in May.

The workers said a women-only facility, which they insist should provide the same counselling and support services as Regina Coeli, is badly needed amid an ongoing drug emergency in Belfast and fears of growing homelessness as fuel, food and rent costs soar.

“Some of our ex-guests who lived in the hostel are on the streets. Some of them have passed away in the city centre,” she told The Detail. 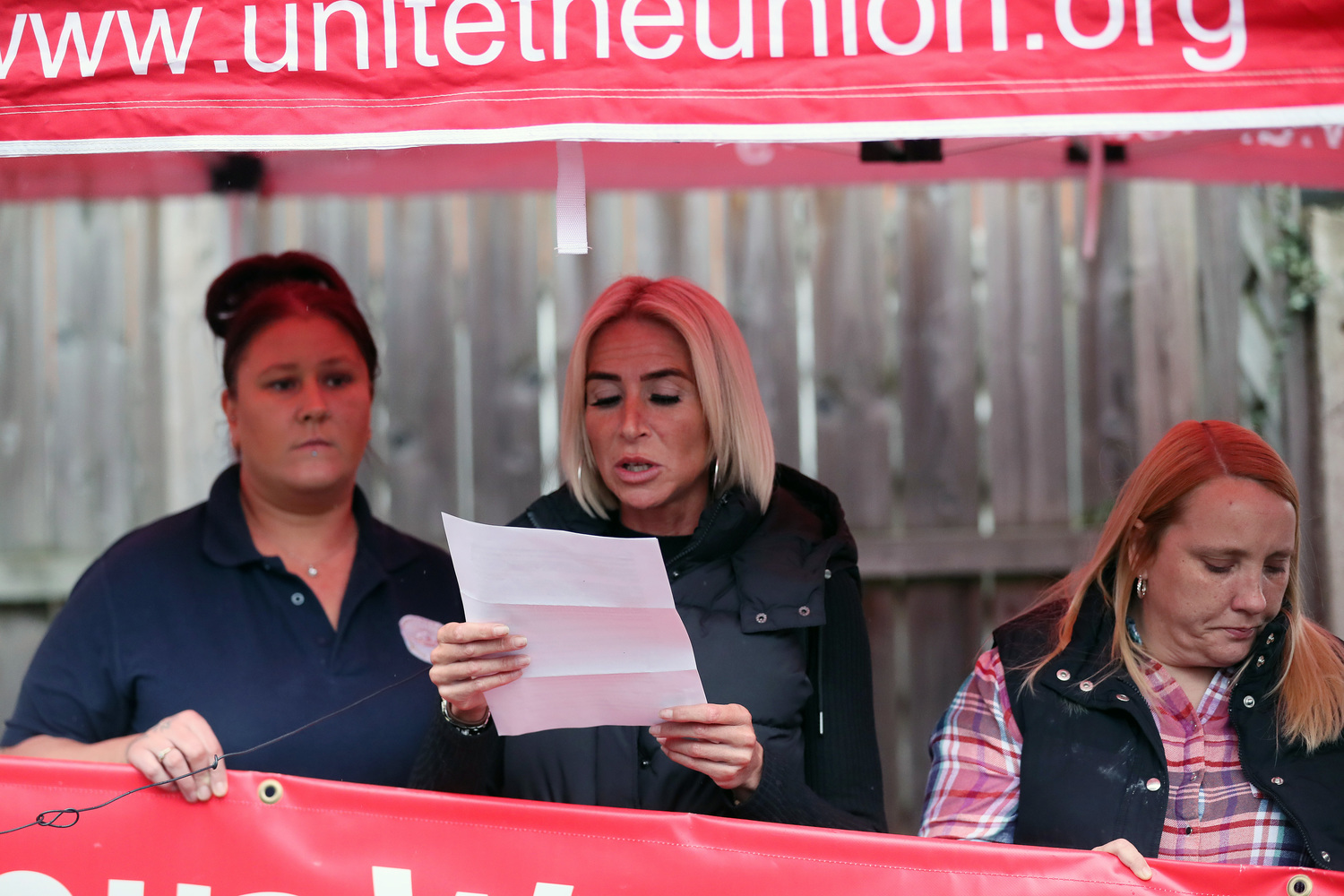 Workers protesting at the closure of Regina Coeli in January. Picture by Jonathan Porter, Press Eye

Senior support worker Emma McCann, a Unite the Union shop steward at Regina Coeli, said the need for a women-only facility is growing.

“It’s 2022. We should not be sitting here talking about women lying on the streets because they have nowhere else to go,” she said.

The Northern Ireland Housing Executive (NIHE), under the DfC, has responsibility for hostel provision, although most facilities are run by charities who receive money from the NIHE's Supporting People fund.

A “preferred applicant” has been awarded a contract by the executive to set up a new hostel but it remains unclear where the facility will be based or when it will open.

The executive said it is “engaging closely with the preferred service provider while they source appropriate, safe and secure premises to deliver these services”.

In an answer to a written question submitted by People Before Profit MLA Gerry Carroll, the DfC said it could not say who will run the new hostel “due to commercial sensitivity and ongoing negotiations external to the Housing Executive”. 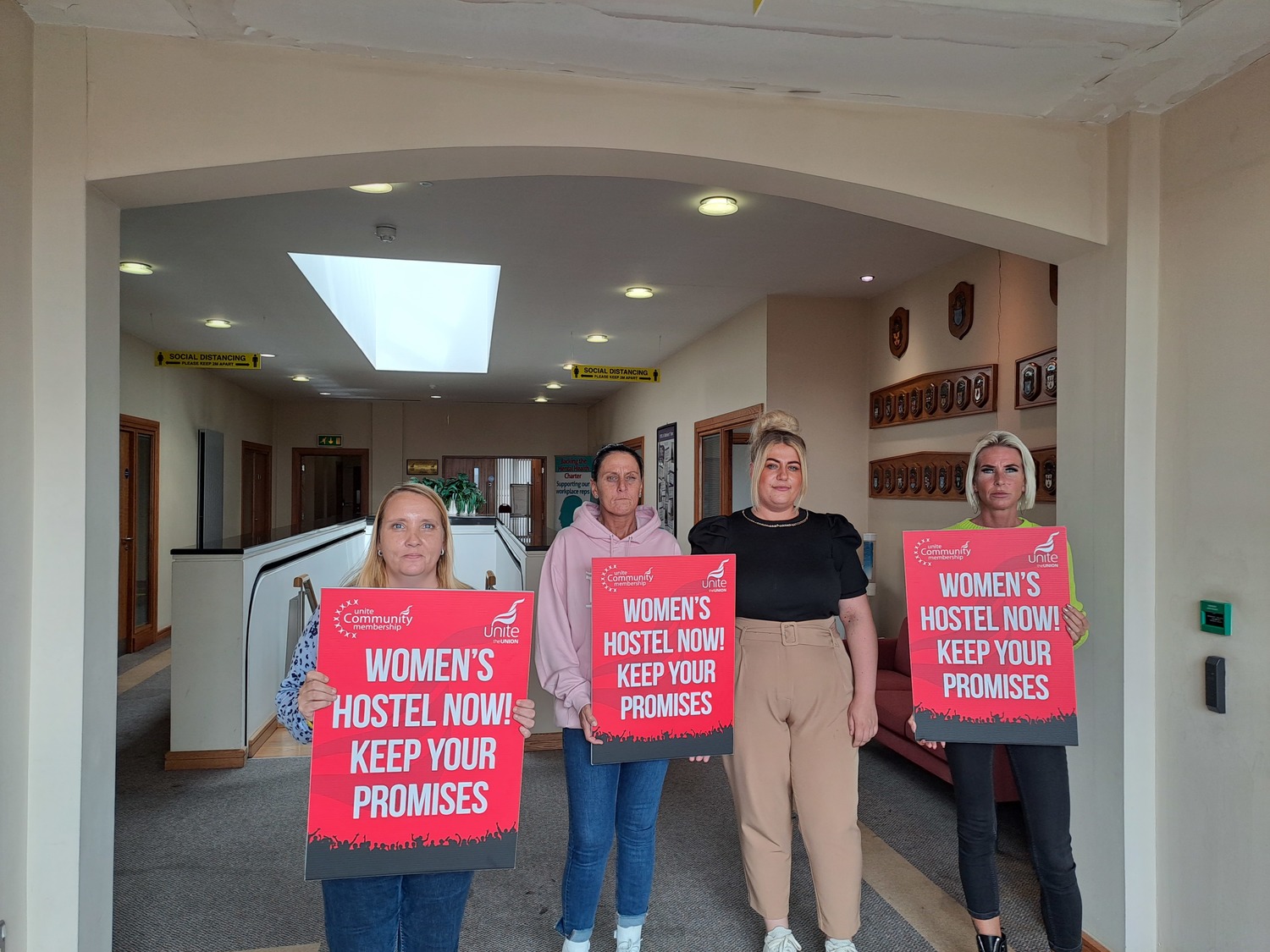 ‘I have seen girls lying on the streets’

Former Regina Coeli workers Ms McCann, Ms Kinghan, Sonia Kinghan and volunteer Danielle Hughes have told The Detail that the NIHE must run the new service rather than outsource it to a charity.

The women are so desperate for services to be set up that they have even offered to manage any new hostel themselves.

Ms McCann said the workers – who have mental health, addiction and challenging behaviour training - are “all skilled and qualified” to run any new hostel.

“We were running Regina Coeli for years,” Ms McCann said.

“We all have what it takes to run it. It’s all about who you employ.

“These women need proper people to look after them. If you’re there for the money it’s not the job for you. We were on £8 an hour.

“So long as my kids were fed and my bills were paid I was okay. It was never about the money for me.”

Residents at Regina Coeli included 18-year-olds who were still at school and women in their eighties; those who had been forced from their homes due to paramilitary threats; ex-prisoners; foreign nationals who were victims of sex trafficking, and women who needed help following a family breakdown.

She said workers want any new service to be similar to Regina Coeli but with improved provision.

“I would love what Regina Coeli was,” she said.

“It can’t be clinical. It has to be safe, feel secure, feel warm, feel like a home but with their own bedrooms, none shared, their own bathrooms.

“They (the residents) loved being out in the garden and cooking and baking. A lot of them didn’t have a motherly figure in their lives and didn’t know how to cook or use a washing machine or anything.”

She said many women do not want to be housed in city centre hostels because drugs are easily accessible.

“When you go into the town you can get drugs just like that,” she said.

Ms McCann said many former Regina Coeli residents have turned their lives around thanks to the care they received.

“You often ask what your purpose in life is. As soon as I went in, I knew that was my purpose,” she said.

Ms Hughes, who was a resident at the hostel around a decade ago, now volunteers to help vulnerable homeless people in the city centre.

“I have seen the girls lying on the streets. I saw a girl who was in Regina Coeli two years ago,” she said. 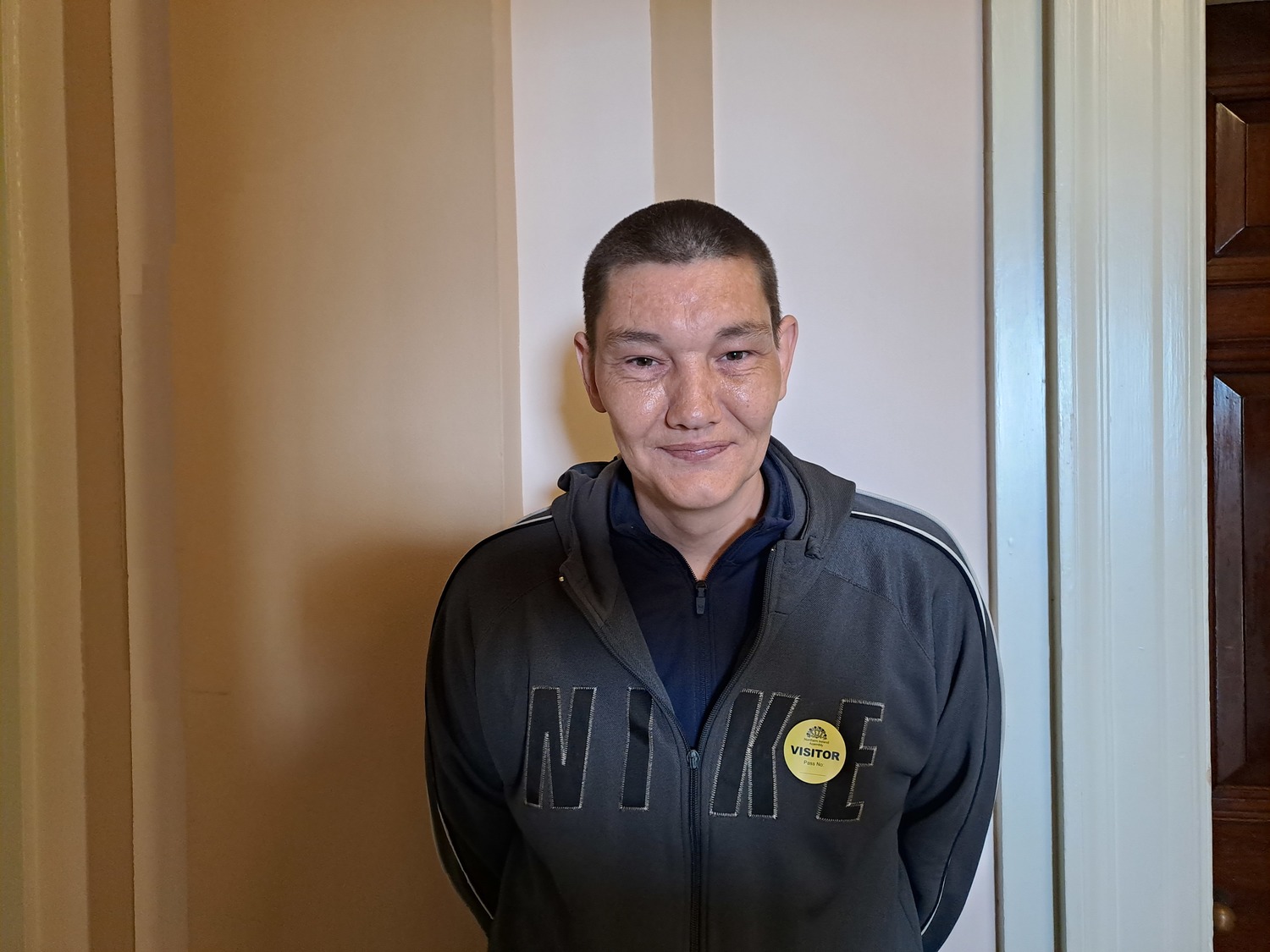 Sean Kane, a volunteer with Reaching Out Homeless and Community Support. Picture by Claire Simpson

‘I saw a woman injecting on the street in broad daylight’

While it is difficult to quantify the number of women on the streets, several support workers stated they have seen a sharp rise in female rough sleepers this year, many of whom are also intravenous drug users.

Sean Kane, who experienced homelessness for 16 years, is a volunteer with Reaching Out Homeless and Community Support.

“For the first time I saw a woman injecting on the street in broad daylight,” he said.

“It was sad, really sad. With Regina Coeli closing down there has been a rise in females (on the street). Most of those women have complex needs.”

Liz Rocks, who works for the Belfast Homeless Services charity, said homelessness in Belfast is the worst she has ever experienced.

Ms Rocks said she has noticed an increase in the number of young women who are seeking help.

“With our services we see more men than women but over the last few months we have seen an influx in young girls in their twenties,” she said.

“They are struggling with addiction and sexual exploitation.”

“Since Regina Coeli closed women are having to go to mixed hostels and they might not be comfortable there if they’ve experienced abuse, whether that be physical or sexual,” she said.

“When you’re in an all-female hostel you’re receiving support not just from the staff but from other women.”

Regina Coeli staff first learned in November that the hostel would close.

The management committee told workers that the building needed £500,000 of repairs and would have to shut its doors in January.

The workers said they were stunned by the closure, given the high demand for beds.

The three-floor hostel had capacity for 21 residents – dropping to 11 due to Covid social distancing rules.

Women were generally referred to the facility by outside agencies, primarily the NIHE. 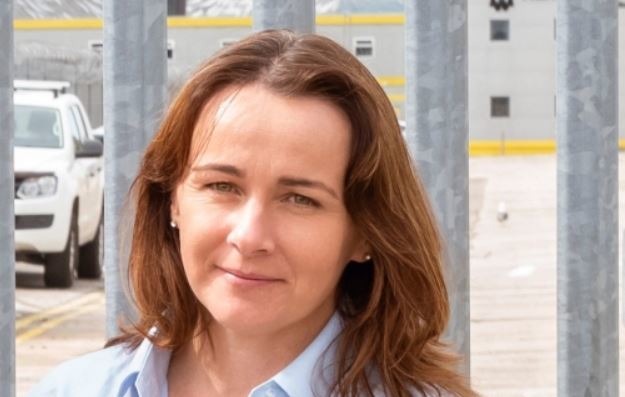 Susan Fitzgerald from Unite the Union has supported the Regina Coeli workers since before the hostel closed.

“In an ideal world you wouldn’t have essential services outsourced to any charity, even a brilliant charity or individuals,” she said.

“The state provider for housing should provide housing.

“We need housing and the social, health and mental health services to go along with it.

“In that context, the best provider is the Northern Ireland Housing Executive. There’s no doubt that within that the best people to provide services are committed activists.”

She said the women who ran Regina Coeli should be “at the top of the list” of people to run any new service “based on all of the work they did over the years to keep that service going”.

“The Housing Executive should set it up and our members should run it because they have a proven record,” she said.

Ms Fitzgerald said Regina Coeli provided a “unique service” that was “nestled in the heart of a community” rather than “in a sterile office block in town”.

“This was the only place in the whole of Northern Ireland for women who couldn’t go to a mixed place,” she said.

She said Unite was given assurances from the DfC and the Housing Executive that an “enhanced, extended service would be delivered in May”, including several hostels providing the same services as Regina Coeli.

“It was only on that basis that the occupation ended,” she said.

A spokesman for the DfC said: “The safety and well-being of vulnerable women who require emergency accommodation is a priority for the Minister who has been doing everything in her power to ensure a new women’s only facility is in place as soon as possible.

“The Housing Executive has appointed a provider to run these vital services and continues to work with them to finalise appropriate, safe and secure premises.