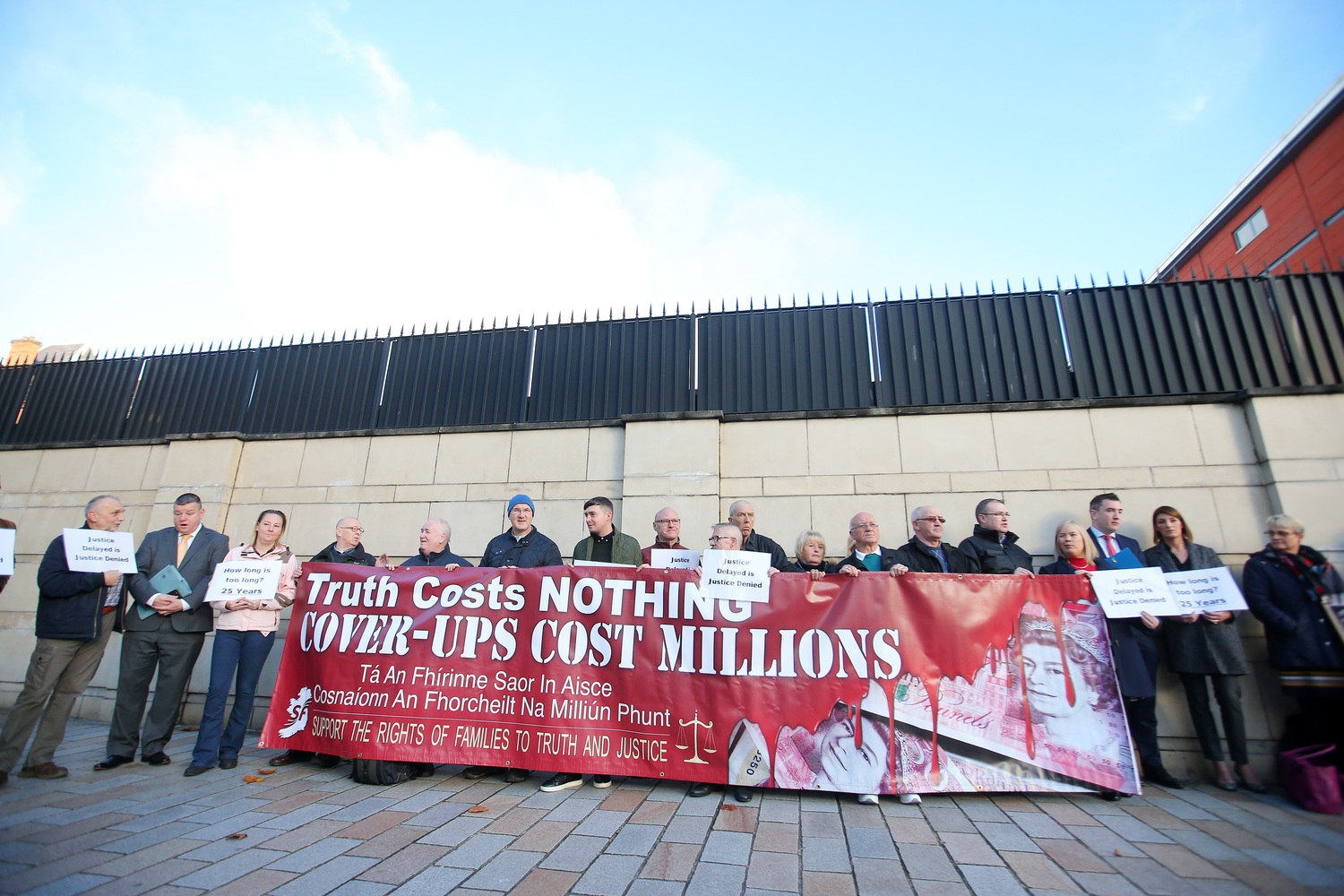 OUTSTANDING issues relating to the Northern Ireland conflict are proving to be a major stumbling block in negotiations to form a government in the Republic of Ireland.

On Thursday of last week, Fianna Fáil leader Mícheál Martin and Sinn Féin leader Mary Lou McDonald traded insults during their speeches in the opening session of the 33rd Dáil. During the process for nomination of Taoiseach, Martin stated: "The past is important and Sinn Féin's efforts to legitimise a murderous sectarian campaign keeps alive a narrative which is used by dissidents to keep alive their campaigns today."

Responding to his comments McDonald said: "If you keep reaching desperately for the past it really says that you're not up for the future."

The following day, speaking at a passing out ceremony for new recruits, Garda Commissioner Drew Harris said that he concurred with the assertion that the Provisional Army Council still controls Sinn Féin and the IRA. This contention was dismissed as "nonsense" by Sinn Féin.

Earlier this month First Minister and DUP leader Arlene Foster outlined problems she has with The Stormont House Agreement regarding legacy issues. In a letter to Julian Smith, the then Secretary of State for Northern Ireland, Foster called for this agreement to be revisited, declaring it to be "unacceptable".

In response, the deputy First Minister Michelle O'Neill was quick to call on the British Government to fully implement the terms of The Stormont House Agreement.

Despite the preponderance of the past in the current political climate north and south of the border, the results of The Detail's opinion poll reveal that legacy issues are ranked lowly in a list of priorities by people in both jurisdictions.

Having a peaceful society is the issue considered most important by the largest number of people on both sides of the border.

Those taking part in our online poll were asked to list a range of issues in order of importance from one to 10, one being the highest priority and 10 representing the lowest.

The issues for categorisation were as follows: a state pension, access to social housing, benefit entitlement, education, free healthcare, human rights, identity/tradition, legacy issues relating to the conflict/troubles, a peaceful society and the economy.

In Northern Ireland, a peaceful society was ranked number one by the highest number of people at 31.4%. This was followed by access to free healthcare at 26.3% and the economy at 16.5%. Legacy issues were considered most important by only 2.8% of those polled.

The NI results broadly align with opinion in the south. Peaceful society, human rights and free healthcare were given top priority by the three biggest percentages of people. Legacy issues were considered most important by just 3.2% of respondents in ROI. 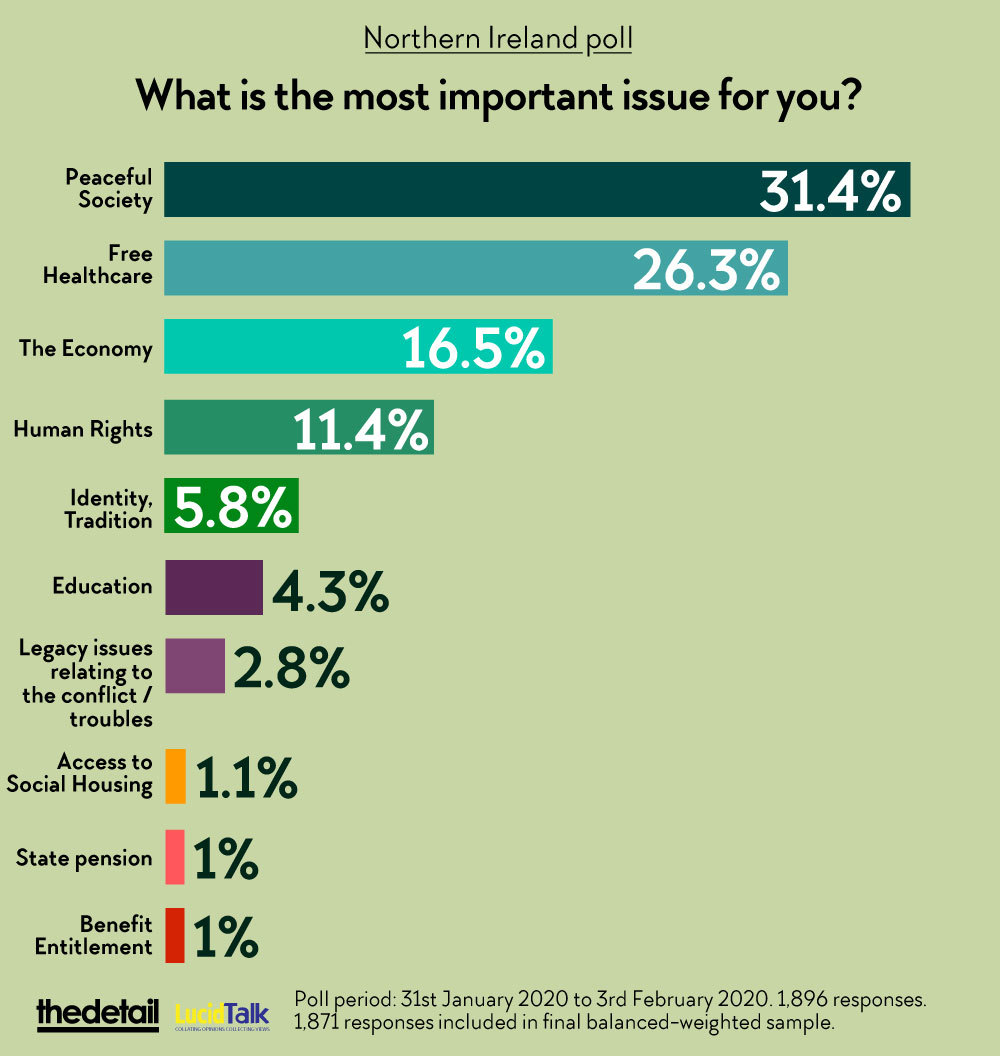 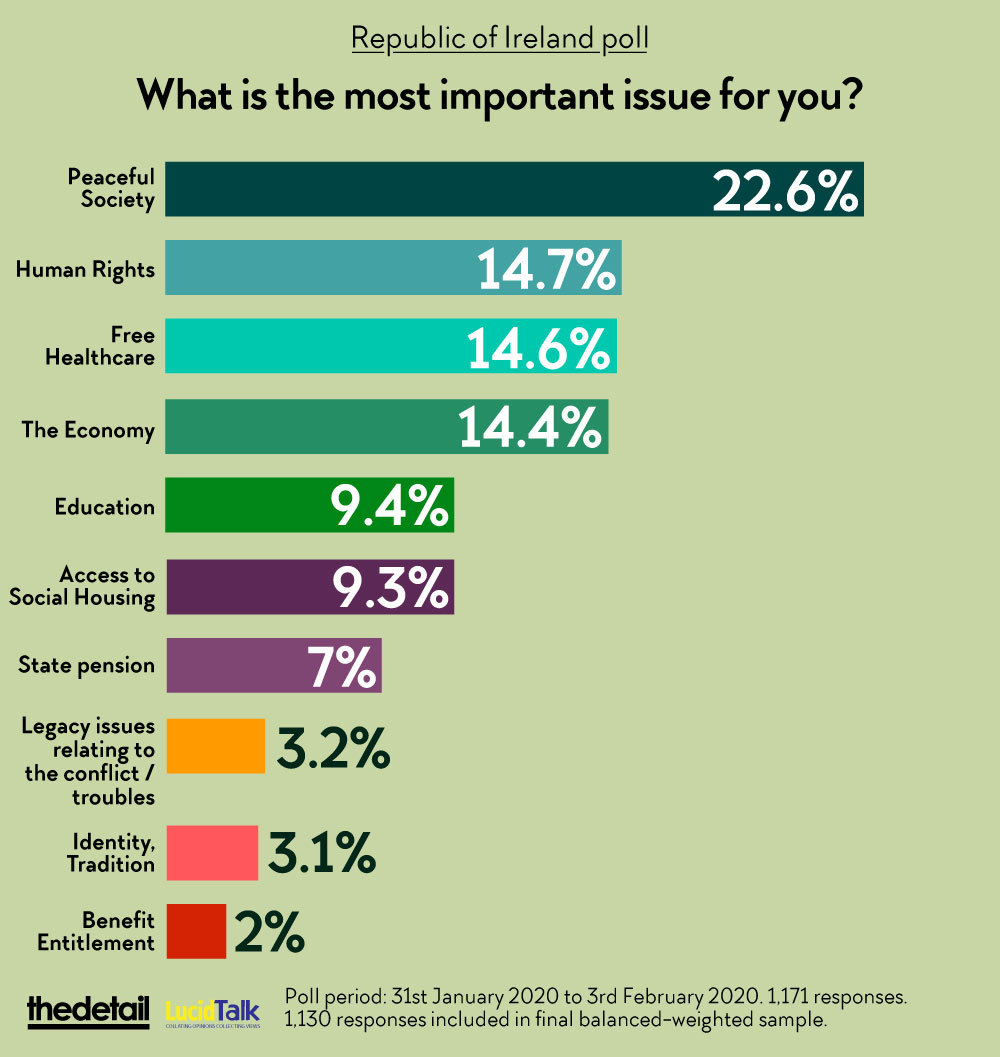 These results indicate that legacy issues are not as significant amongst the general population as their dominance of the political narrative would suggest.

When questioned as to how outstanding legacy issues should be managed, 34.1% of NI respondents said they should be resolved before a border poll, 32.8% believe they should be left in the past and 25.3% preferred that they be dealt with under a new structure in a new Ireland.

In the Republic of Ireland, 41.7% were of the opinion that outstanding legacy issues should be dealt with under a new structure in a new Ireland, 28.6% believed they should be resolved before a referendum would take place and 21.5% felt they should be left in the past. 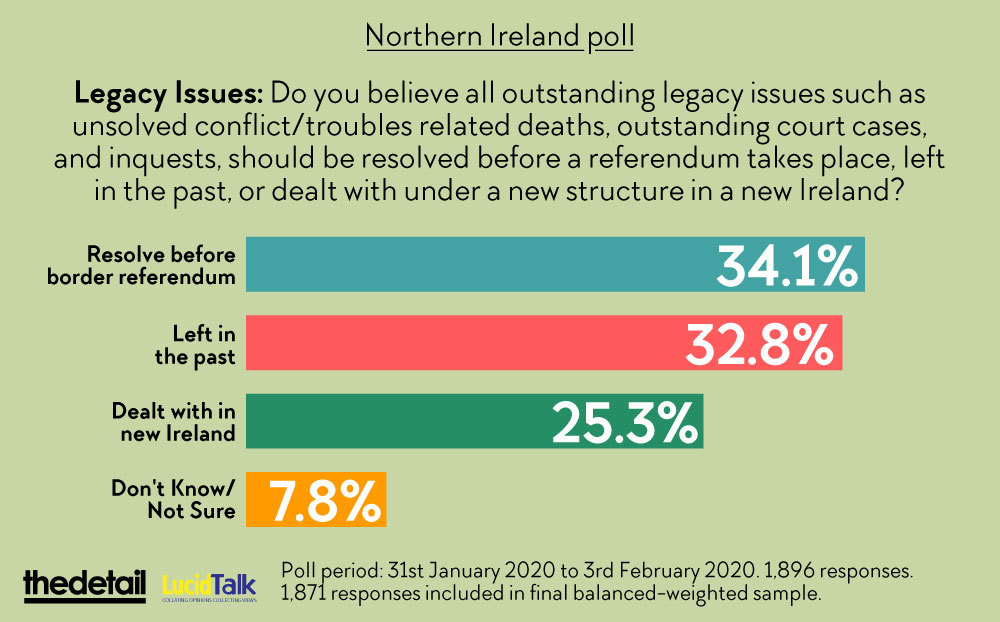 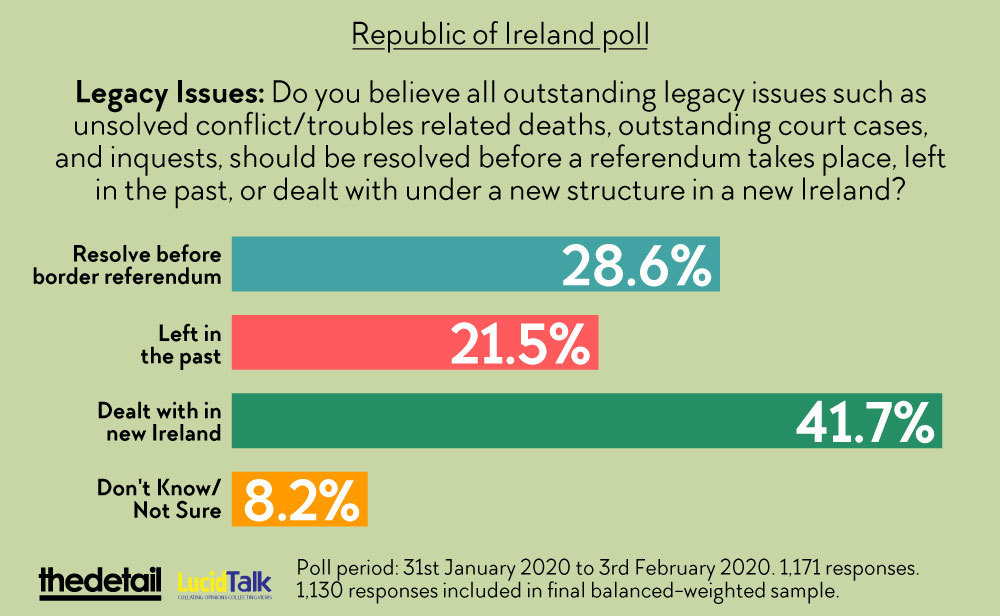 The results of our poll also indicate that identity and tradition are low down in the pecking order in both the north and the south of Ireland. Of those asked in NI, 5.8% gave this issue top priority and the corresponding figure was 3.1% in ROI.

Those taking part in our poll were asked to rate the level of respect and protection they believed a Protestant/Unionist/Loyalist identity would be given as a minority community in a united Ireland. 0 represents no respect and 10 full respect. In NI, 21.2% of those polled believed that people identifying as PUL would have maximum respect, while 18.6% were of the opinion that this community would have zero respect in a united Ireland.

In ROI only 2.1% believed that a minority PUL community would be given no respect in a united Ireland. 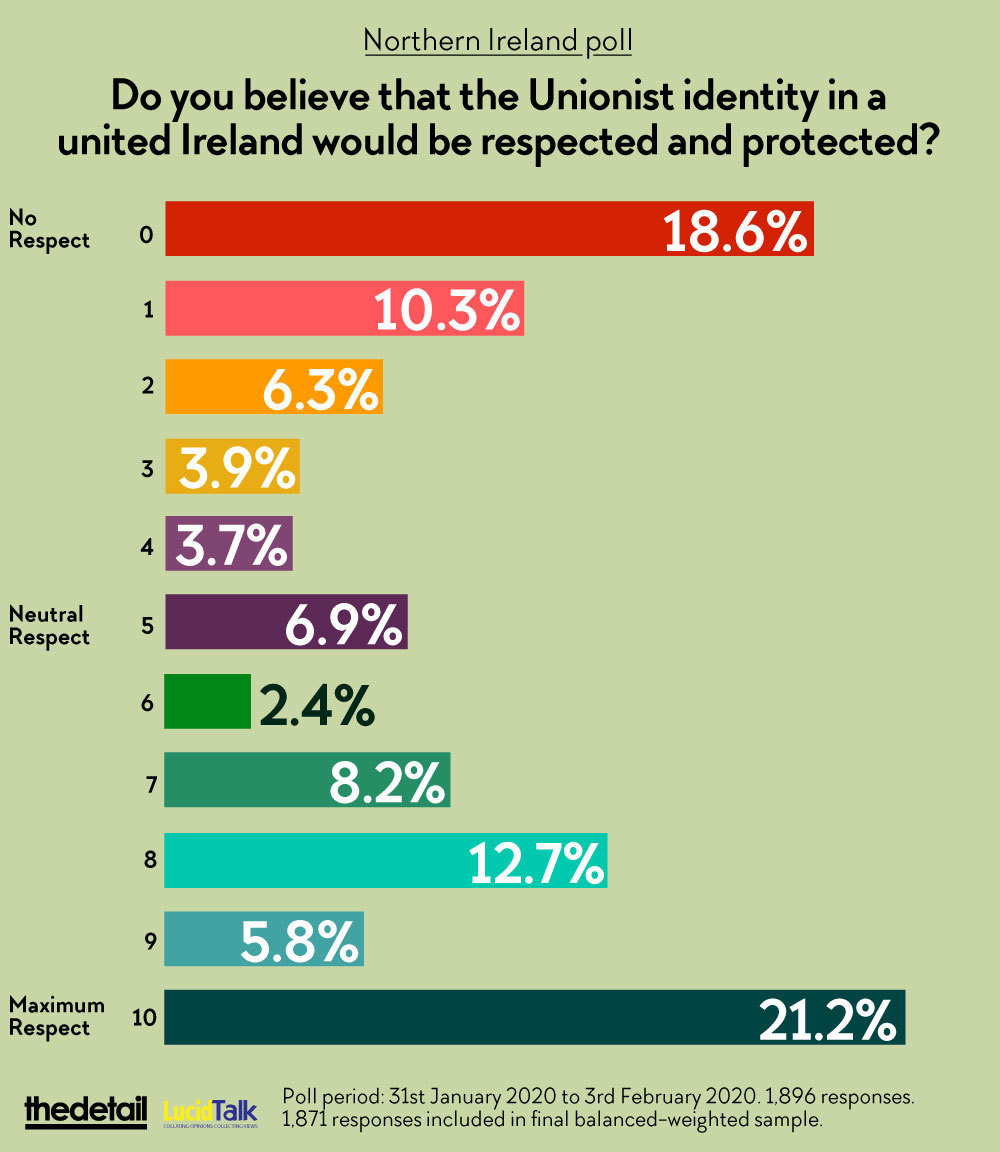 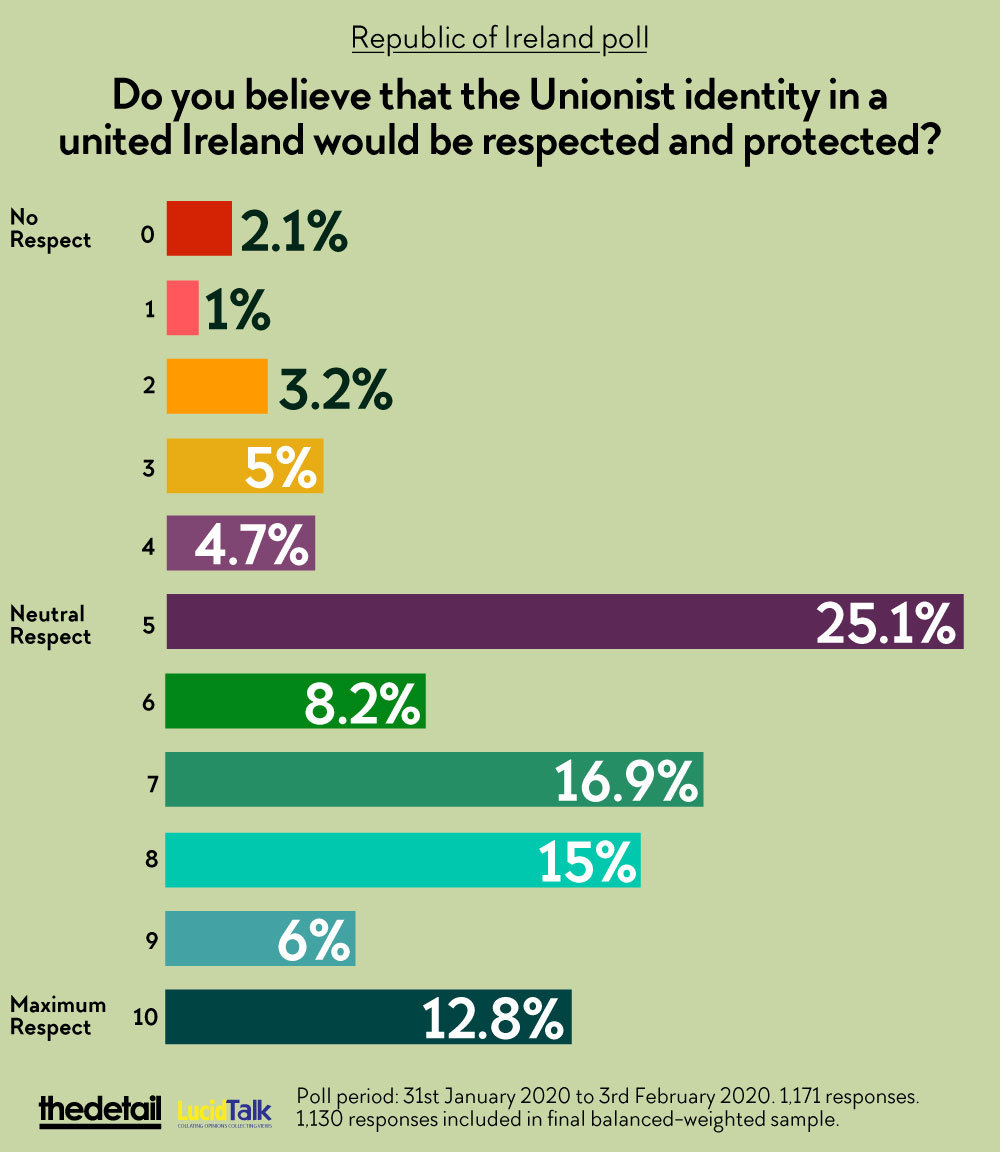 The all-island opinion poll is part of The Detail's Brexit project, which is produced with the support of the Google Digital News Initiative Fund. The poll was conducted in conjunction with LucidTalk polling company and took place over four days from January 31 to February 3, 2020.