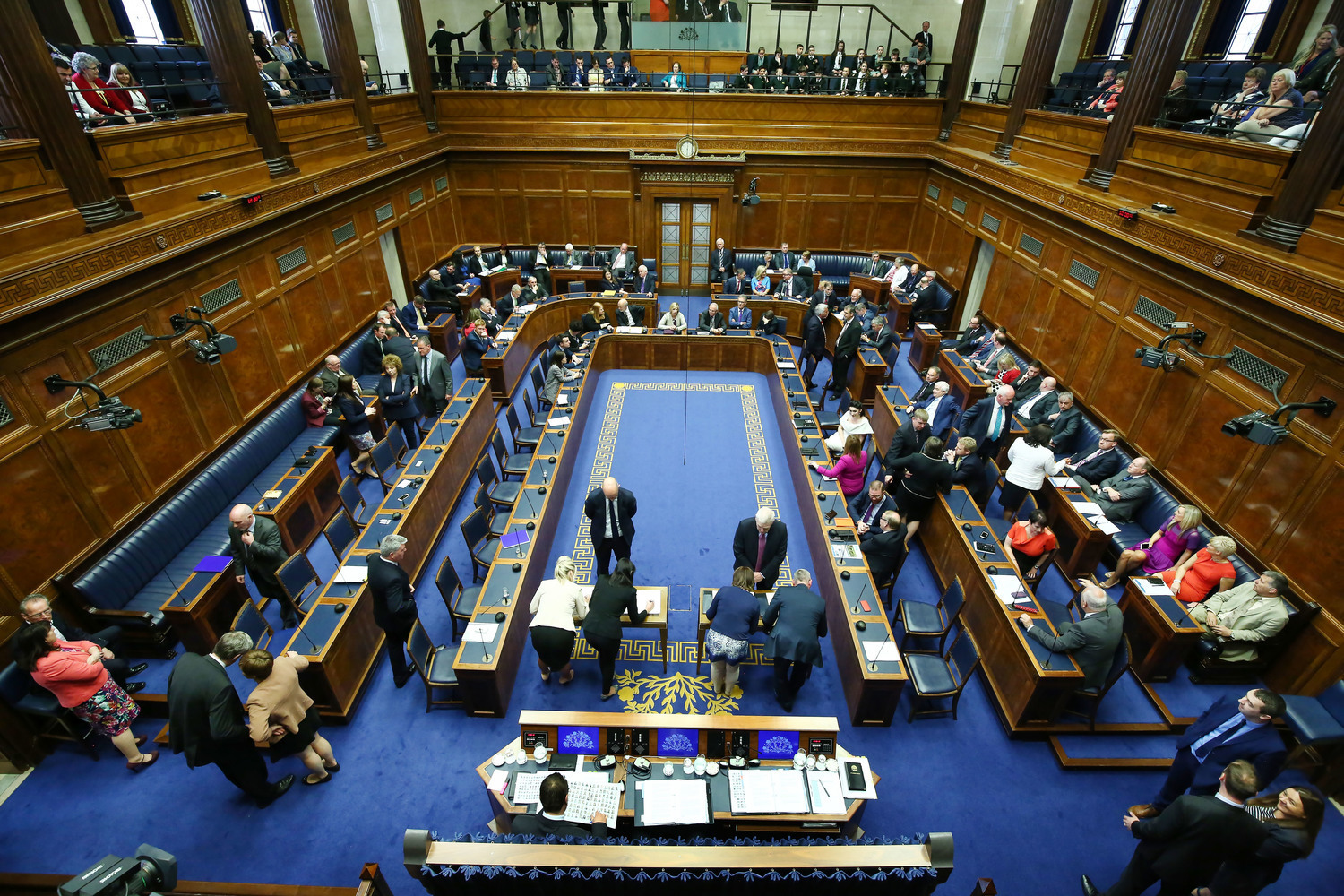 The high use of petition of concern by the DUP was helped by the fact the party had more than the 30 members needed to sign the document so it is enacted.

In the 2011 Northern Ireland Assembly election, the party won 38 seats while Sinn Féin and the SDLP had 29 and 14 members elected respectively. The UUP was the third largest party, winning 16 seats. Alliance won eight, with the three remaining seats going to the Traditional Unionist Voice (TUV), Green Party and Independent David McClarty.

The DUP retained its advantage after May’s Stormont election when it kept its 38 seats. The UUP returned 16 members while Sinn Féin and the SDLP lost one and two seats respectively to minority parties whose leaders could decide not to engage with the veto process. Alliance kept its eight seats, while People Before Profit Alliance and the Green Party won two each. The remaining two seats went to the TUV and Independent Claire Sugden.

PARTY REACTION TO THE DETAIL’S FINDINGS

A DUP spokesperson said: “The petition of concern is currently a legitimate mechanism for use within the Assembly structures. While that is the case we will continue to use it when it is deemed appropriate.”

No-one from the party responded to our several requests for comment.

SDLP’s Alex Attwood MLA said: “There is absolutely no doubt that the petition of concern has been abused in recent years, particularly by the DUP who appear to be responsible for an incredible 75% of all uses of the mechanism.

“The SDLP believes that the petition of concern should be restored to its original purpose and restricted to areas where there are clear and identifiable human rights or equality impact concerns. It cannot continue to be used as a one party veto over progressive proposals or legislation that would benefit this society.

“The systemic deployment of the petition of concern as an anti-democratic veto, particularly to suppress minority community rights, is a violation of all it was meant to be. Those who continue to abuse it in that way are contributing to the wide scale erosion of public confidence in politics and politicians.”

Alliance Party leader and former Justice Minister, David Ford MLA, said: “There was a clear understanding why we had a petition of concern in the Good Friday Agreement, to ensure that key issues could not be decided by representatives from, effectively, only one side of the community. What we’ve seen, however, since 1998, is the widespread use of petition of concern on matters which are not simply key issues for one section of the community.

“In my opinion they’ve been used completely inappropriately against things like private members’ motions in the Assembly which have no formal position and they have certainly been used utterly inappropriately to defend ministers from criticism within the Assembly. That’s the kind of behaviour which I don’t think would be tolerated in any other legislative jurisdiction in these islands.

“I think it almost amounts to contempt for democracy, regardless of the numbers that will stop it happening.

“It clearly does need reformed. Matters of national identity, legacy of the conflict and constitutional structure are the kind of things we describe as key issues. These are the kinds of issues that are relevant. We were open to discuss reforms but it was clear, when an Alliance delegation met the First Minister and Deputy First Minister shortly after the election, that there was no willingness to reform on the part of either of them.”

Green Party leader, Steven Agnew MLA, said: “Dissatisfaction with the petition of concern mechanism is mounting. Instead of being a legitimate tool to ensure a particular motion has cross-party support, it is being wielded to protect party self-interest and stifle necessary debate on issues such as marriage equality.

“I have signed petitions of concern on four occasions when I was the sole Green Party MLA. As such, I was able to effect change on fundamental issues, such as welfare reform, which would have negatively affected thousands of people in Northern Ireland. I did not take the decision to sign them lightly.

“The petition of concern mechanism needs to be reformed. The Green Party would like to see the removal of community designation in the Assembly and replace this by 2/3 majority decision making.”

The Ulster Unionist Party’s Chief Whip Robin Swann said: “Petitions of concern have been bandied about like confetti. They have been repeatedly abused and misused and the process brought into disrepute as a result.

“In the last mandate we supported petitions of concern on one issue. Unlike other parties, we did not use the petition of concern mechanism to protect our own ministers from scrutiny or criticism.”

Click here to read The Detail's full analysis on Stormont's use of petition of concern.