Damning report highlights how prisoner blinded himself by "gouging" his eyes 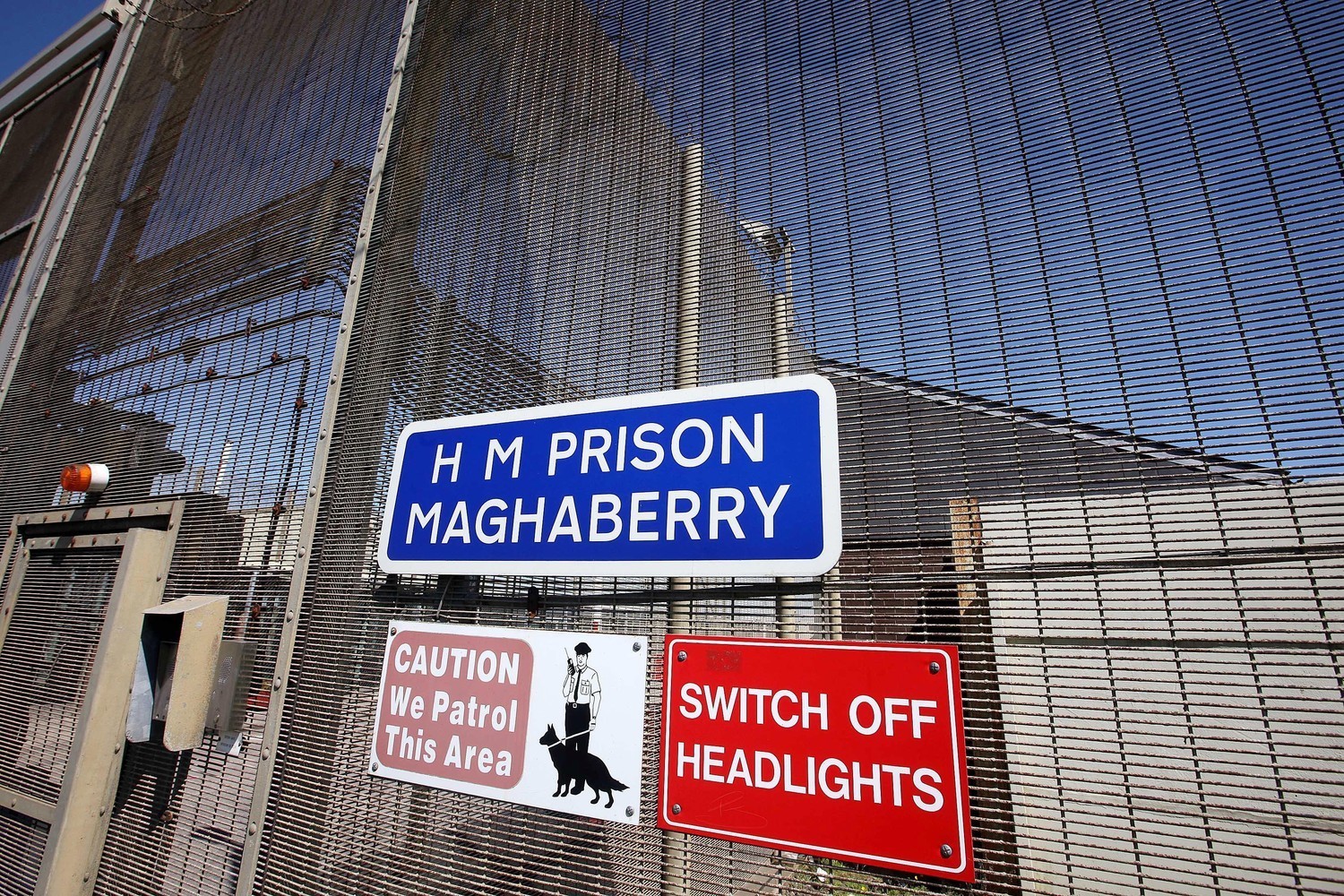 PRISON authorities have been criticised for failing to prevent a self-harming incident that left an inmate permanently blind after he gouged his eyes in Maghaberry Prison.

Sean Lynch was 23-years-old in 2014 when he was remanded in custody facing assault charges.

Despite the fact that a detailed medical report was sent to Maghaberry stating that a psychiatric assessment was an “absolute necessity”, he was treated as a “routine referral” and it was two weeks before he was taken to see a psychiatrist.

A new report by Northern Ireland’s Prisoner Ombudsman Tom McGonigle has described Mr Lynch's self-harming incident as "extreme and shocking". The report refers to CCTV footage from an observation cell of Mr Lynch "gouging" his eye rendering himself blind and inflicting injuries to his groin.

Mr McGonigle criticised prison officers for not intervening in the self harming incident that occured over a period of 67 minutes during which Mr Lynch was directly observed and spoken to by landing officers for 17 minutes.

He said: “Although they complied with a strict interpretation of governor’s orders which require intervention if a situation is ‘life-threatening,’ Mr Lynch did not meet the definition.

“It seems remarkable that the officers felt it was neither necessary nor appropriate to enter his cell to prevent him from self-harming further. Their duty of care was trumped by security concerns that appear to have had little basis in reality.”

The latest ombudsman’s report follows an investigation by The Detail highlighting concerns that prisoners in Northern Ireland with complex mental health needs are being inappropriately sent to prison and often spending long periods in solitary confinement.

The story, available here, included calls from prison watchdogs for the need to establish suitable secure hospital accommodation where prisoners with severe mental health issues can be treated.

The Prisoner Ombudsman’s investigation into Mr Lynch’s self-harm incident found that a transfer from Maghaberry to a secure healthcare setting was considered for him but that the necessary assessment did not take place in time.

A psychiatrist commissioned by the ombudsman to examine Mr Lynch’s case after the incident concluded that the absence of an in-patient facility had a substantial negative impact on his case.

Responding to the ombudsman’s report the Justice Minister said the Prison Service will learn from the findings.

Minister Claire Sugden said: “This was an awful case for everyone concerned and I am deeply sympathetic to Mr Lynch and his family.

“It is important to reflect on the independent assessment quoted in the ombudsman’s report which said Mr Lynch’s condition was beyond anything that prison officers could cope with.

“While our officers are trained to support and care for vulnerable prisoners, the Supporting Prisoner at Risk (SPAR) process was not designed to care for someone as challenging as Mr Lynch.” The Prisoner Ombudsman’s report outlines how in November 2013 Sean Lynch was charged with assault and criminal damage. He was granted bail but breached the conditions. As a result he was remanded to Maghaberry Prison on 22nd April 2014.

After Mr Lynch was arrested a police doctor examined him and concluded that a formal psychiatric assessment was “an absolute necessity”. They wrote a letter outlining this which was to accompany Mr Lynch, should he be remanded in custody.

The police doctor told the ombudsman that it was rare for them to be so concerned that they felt compelled to write a letter for the attention of prison staff.

The ombudsman’s report outlines how during his court hearing Mr Lynch interrupted the proceedings by shouting to the extent that the court had to be halted. He did not settle down and was removed from court, where he continued to shout from the police van.

His behaviour led escort staff to suggest that he would be taken to a psychiatric hospital, but he was remanded in custody to Maghaberry Prison.

The Prisoner Ombudsman’s report published today focuses on a number of self-harm incidents that Mr Lynch inflicted on himself while in custody.

The ombudsman said this followed deterioration of his mental health in the community and “increasingly bizarre behaviour in prison”.

His report highlights occasions when Mr Lynch had to be restrained by prison officers. In one instance he had to be tranquilised and in another he seriously assaulted a prison officer.

The ombudsman found that the escalation in Mr Lynch’s self-destructive behaviour meant that he required treatment at outside hospitals on two occasions.

The ombudsman’s report states that Mr Lynch’s main self-harm episode on 5th June 2014 lasted for 67 minutes. During which he was directly observed and spoken to by landing officers for 17 minutes. He self-harmed on 20 separate occasions during this period, each lasting an average of 26 seconds.

He damaged both eyes to the extent he rendered himself blind and inflicted injuries to his groin.

Commenting on the incident in his report Tom McGonigle said: “It seems remarkable that several experienced Northern Ireland Prison Service officers, including a senior officer, all felt it was neither necessary nor appropriate to enter his cell to prevent Mr Lynch from self-harming further.”

The prison officers who witnessed the incident told the ombudsman that the main reason for the delay in intervening was that they did not realise the seriousness of Mr Lynch’s injuries.

They also believed staff would be unable to manage him, and that there could be a risk to prison security if he were able to obtain the keys they carried. The ombudsman said that “their duty of care was trumped by security concerns that appear to have had little basis in reality.”

A Prison Officers Association (POA) representative told the ombudsman that the only option available to these officers would have been to handcuff Mr Lynch to prevent further self-injury and this would probably have caused him to become confrontational.

Responding to this in his report Tom McGonigle said: “handcuffing is exactly what the officers needed to have done if they were to fulfil their duty of care.”

The ombudsman’s report acknowledged that the prison officers complied with a strict interpretation of prison rules that requires intervention if a situation is life-threatening, which is defined as “A prisoner with a ligature, with serious cuts, or unconscious, or any unexplained reason where there is no response from them.”

They claimed Mr Lynch was not profusely bleeding and therefore did not meet these criteria.

However in his report the ombudsman pointed out that the prison service’s Suicide and Self-Harm policy requires that “a prisoner who inflicts a serious self-injury…. should not be left alone, even to summon help, as they may attempt further injury if left unattended….”

The ombudsman said “this is a clear discrepancy that must be remedied”.

This report concluded that this case illustrates the difficulty of managing someone who is severely mentally ill in prison.

In a statement outgoing Northern Ireland Prison Service Director General Sue McAllister said: “This report clearly illustrates the difficulty of managing someone with severe mental health issues in a prison.

“Prison officers support a wide range of challenging people in custody and play a pivotal role in keeping prisoners safely and securely. In my thirty years in prisons I have never come across a case of such extreme self-harm.” Delivery of healthcare in prisons in Northern Ireland is the responsibility of the South Eastern Health and Social Care Trust.

An independent review commissioned by the South Eastern Trust into Mr Lynch’s treatment and care highlighted that dealing with mental health issues within a custodial setting is very difficult.

Responding to the ombudsman’s latest report a spokesperson for the trust said: “This has been a tragic outcome for Mr Lynch and we have already expressed our sympathy to him and his family. We will continue to work closely with NI Prison Service to improve support for vulnerable people within the prison setting.”

Commenting on Mr Lynch’s case in his report Tom McGonigle said: “Numerous people from the Northern Ireland Prison Service and the South Eastern Health and Social Care Trust were involved, but nobody took overall responsibility for managing him, either as a patient or as a vulnerable prisoner.

“Events moved faster than the official reaction, and his increasingly bizarre and violent crises were met by short-term responses which included several moves of location and placements in observation cells with anti-ligature clothing.”

After his eye surgery in hospital Mr Lynch was granted a discharge plan that entailed him being bailed to a psychiatric hospital.

In 2012 an enhanced healthcare landing in Maghaberry prison was closed, though some mental health and clinical addiction services were retained.

Last week a special report by The Detail highlighted concerns about the suitability of prison for inmates with mental health problems. A number of regulatory bodies have since stressed the need for an inpatient healthcare facility within Maghaberry.

As part of the ombudsman’s latest report some health trust personnel expressed serious concern to the ombudsman about the unavailability of a healthcare observation wing in Maghaberry to help manage vulnerable prisoners.

The ombudsman found that there were also indications that Mr Lynch was “treated less favourably at outside hospitals because he was a prisoner” and said these matters needed to be addressed by the trust.

A psychiatrist commissioned by the ombudsman to examine Mr Lynch’s case concluded that the absence of an in-patient facility had a substantial negative impact on his case. He said: “This would have allowed him to be observed by nursing staff, to monitor more closely his dosages and response to medications, and also manage any changes in his mental state.

Prisoners’ psychiatric conditions, addictions and personality disorders have been a common thread in critical reports into prison life and individual incidents in jails in Northern Ireland in recent years, including suicides. Click here to read The Detail’s previous coverage.

An inspection of Maghaberry Prison, published in November 2015, found that rates of self-harm had increased and inspectors were very concerned that aspects of healthcare provision had deteriorated.