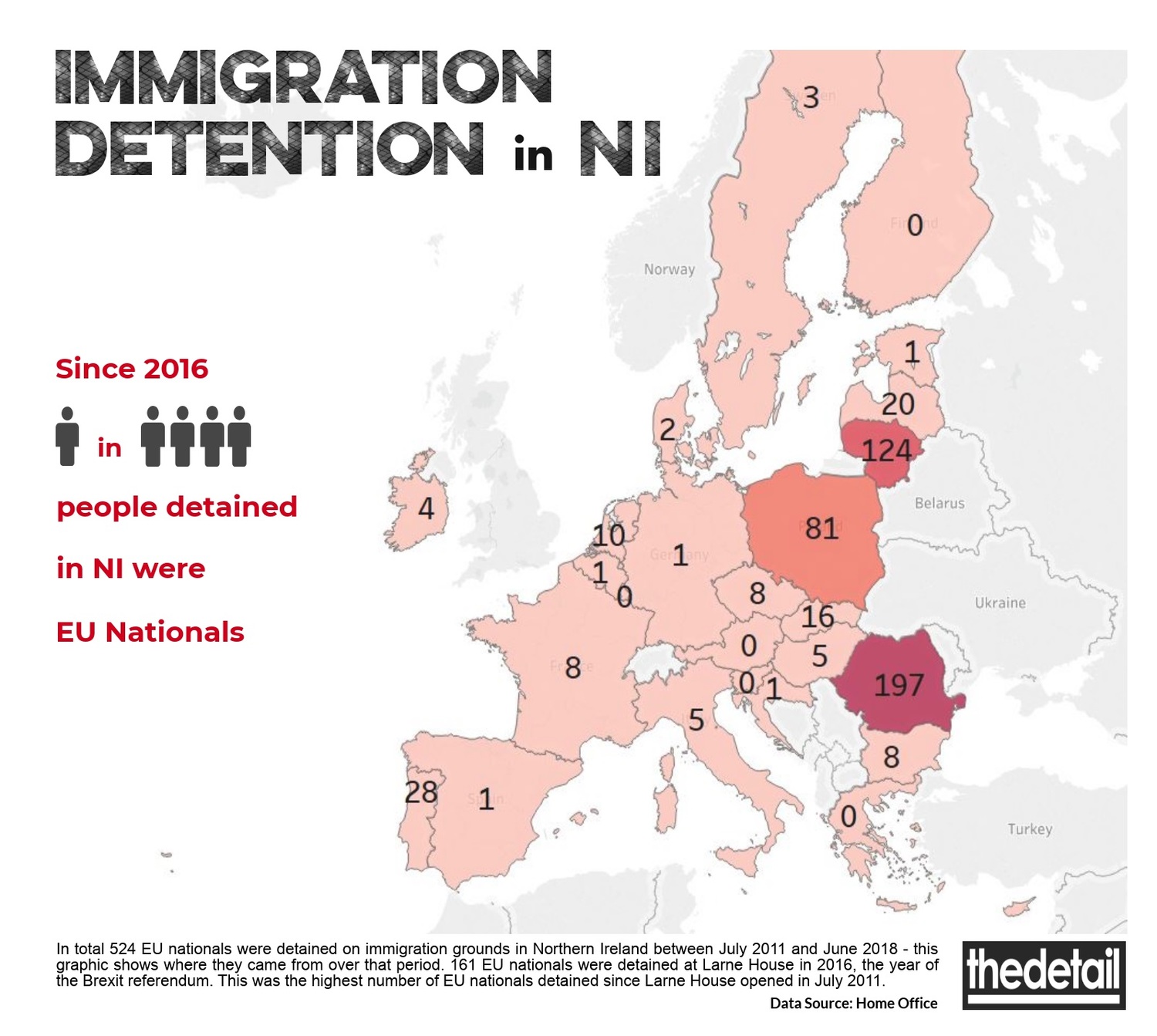 A record number of citizens from European Union member states were detained on immigration grounds and deported from Northern Ireland in 2016, the year of the Brexit referendum, The Detail can reveal.

The number is the highest ever recorded for the detention of EU nationals at the short term holding facility which opened in July 2011.

Only 15 EU nationals were detained in 2012 – the first full year for which immigration detention data for Larne House is available.

An analysis by The Detail of official data also shows that the proportion of EU citizens detained at Larne House rose from one in 12 of all individuals detained in 2014 to one in four in 2016.

In 2015 the Conservative Party made a pre-election commitment to hold an in-out referendum on EU membership before the end of 2017.

The most recent data available shows that 69 people were detained in Larne House in the first six months of 2018. Again, one in every four detained was an EU national.

The Home Office also confirmed to The Detail that 92% of citizens from the 27 EU member states detained at Larne House in 2016 were subsequently deported.

The significant increase in the detention and deportation of EU citizens in 2016 coincided with a UK government pledge to clampdown on immigration as part of its Brexit campaign. Immigration control and enforcement is not a devolved matter.

A charity organisation advocating for an end to immigration detention in the UK, Bail for Immigration Detainees (BID UK), expressed concern over the rising trend in the detention of EU nationals in Northern Ireland around the time of the Brexit vote.

BID UK director, Celia Clarke, said: “It’s deeply disturbing that EEA (European Economic Area) nationals are being detained in such large numbers and that this seems to have increased since the vote to leave the EU.”

The Home Office, however, said the 2016 spike was not Brexit-related but stemmed from a rise in EU nationals with criminal records being intercepted on sea and air routes into Northern Ireland.

A spokesperson for the Home Office told The Detail: “The 73% increase in EU citizens detained in Northern Ireland in 2016 is largely down to a corresponding rise (71%) that year in the number of foreign national criminals intercepted by Immigration Enforcement attempting to abuse the Common Travel Area (CTA) to avoid detection at a UK port. Brexit had no bearing whatsoever on the increase.”

Policy officer with Law Centre NI, Liz Griffith, said: “The threshold to deport an EU national is relatively high and extradition law includes a number of robust safeguards. We are concerned that immigration detention is being used as a fast-track way for the UK to remove EU nationals, thus bypassing deportation/extradition processes.”

The not-for-profit organisation has raised this issue and the rising trend in EU nationals being detained in Northern Ireland with the UK Parliament's Joint Committee on Human Rights, which has opened an inquiry into immigration detention. 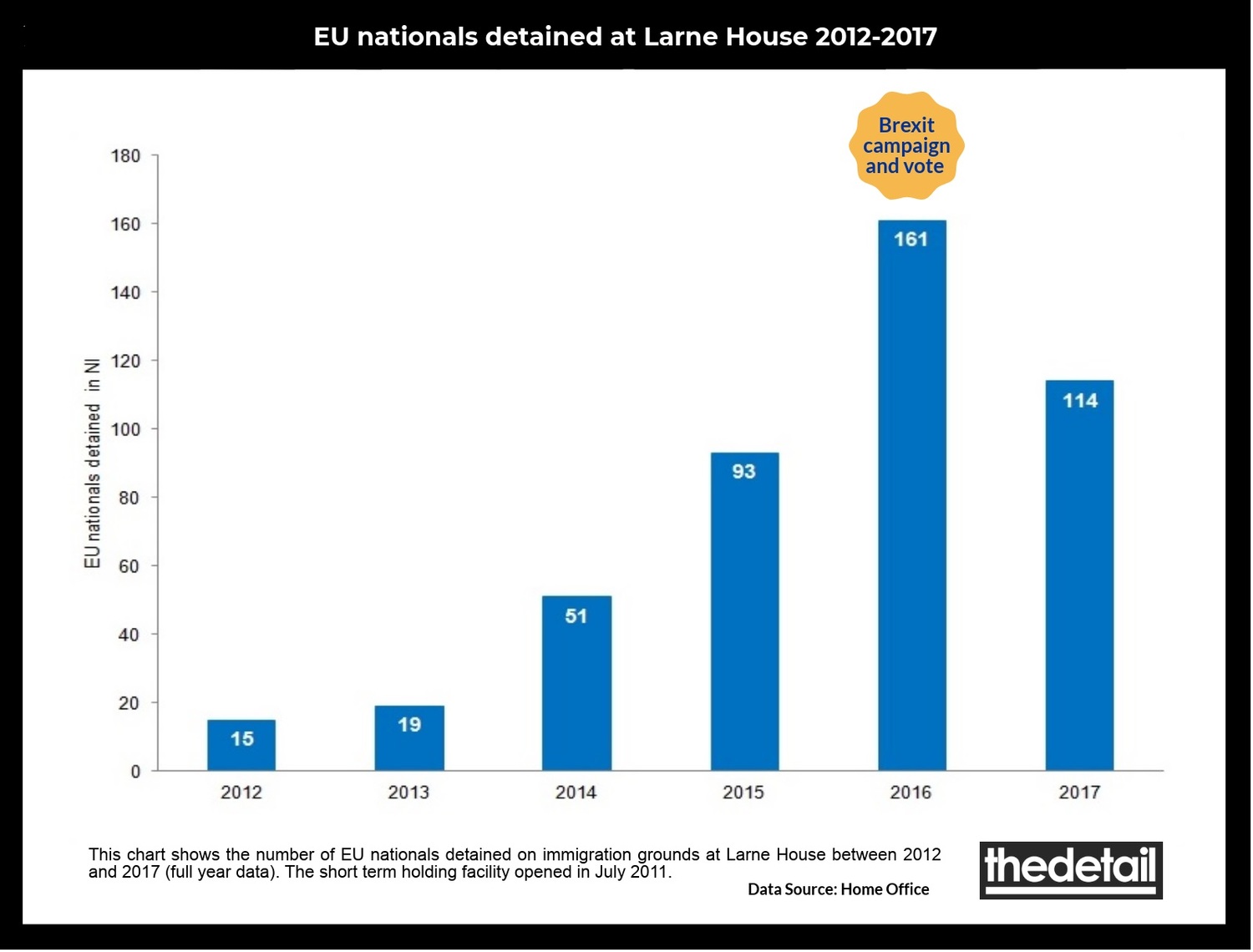 Larne House Visitor Group, a group of volunteers who offer support to individuals detained on immigration grounds, said the rising trend was noticeable before the Brexit referendum in June 2016.

A spokesperson said: “It is not clear what was behind this sudden increase in the detention of EU nationals but we certainly observed a significant rise in European nationals being detained at Larne House from 2016 onwards. The rising trend was also evident before the EU referendum in the UK in June that year.”

Bail for Immigration Detainees UK added the rising trend in detentions in Northern Ireland did not bode well for EU citizens post-Brexit.

BID UK director, Celia Clarke, said: “We cannot imagine what will happen after the UK actually leaves the EU since there are no specific provisions in place yet to regularise the residence of the 3.5 million EEA nationals currently living in the UK.”

The Home Office refused a request by The Detail to visit the immigration detention facility in Larne citing the need to protect the privacy and dignity of those detained as grounds for refusal.

Since July 2011 more than 4,000 people from across the globe have been detained at Larne House, which is located around 20 miles north of Belfast.

The immigration detention facility can hold individuals for up to seven days before they are transferred to long term detention centres in Scotland or England and are then deported, released on bail, or permitted to remain in the UK.

The analysis of Home Office data by The Detail shows that between July 2011 and June 2018 more than 520 EU nationals were detained at Larne House.

While numbers have since fallen off (114 in 2017 and 69 in first half of 2018), official figures show a growing proportion of EU nationals being detained in recent years.

Across the UK, detention rates have increased five-fold since the now Prime Minister, Theresa May, took the helm of the Home Office in 2010. The detention of EU citizens across the UK increased from 1,013 in 2010 to 5,319 in 2017.

The following interactive graphic shows the number of citizens detained at Larne House from each EU member state, by quarter, since its opening in 2011.

Of the 161 EU citizens detained at Larne House in 2016, the Home Office indicated that 92% were deported or removed to their home countries, 5% were bailed or placed under immigration restrictions, and 3% were allowed to remain in the UK.

Larne House Visitor Group, however, said the reasons given by the Home Office for deportation were varied and often less than clear: “It could be a previous conviction in the EU national’s home country or for serving a short sentence for a petty crime committed in the UK. But we’ve also seen a case where a speeding ticket was being used as justification to deport an individual and there have been other examples where individuals faced arrest when re-entering the UK for reasons that were not entirely clear.”

Meanwhile both the UK and Irish governments have refused to release records under Freedom of Information (FOI) legislation on immigration enforcement operations designed to protect the Common Travel Area (CTA).

The CTA provides for the free movement of UK and Irish citizens between Great Britain, Northern Ireland, the Channel Islands, and the Republic of Ireland without routine passport controls.

To guard against free movement in the CTA being abused, UK and Irish governments have cooperated on immigration enforcement and border control operations since 2003 and further enhanced collaboration in a joint agreement signed in 2011.

The Detail sought information on Operation Gull, an immigration enforcement initiative targeting irregular migrants, people without the necessary paperwork, travelling between Northern Ireland and Great Britain and the Republic of Ireland, including by way of the land border.

While the Home Office accepted there were public interest grounds for providing the number of individuals detained under Operation Gull it concluded that releasing it would prejudice relations with the EU.

The Home Office stated: “December’s Joint report between the UK and European Commission confirmed that there will be no physical infrastructure or related checks or controls on the land border and that the Common Travel Area will be protected. However, negotiations on the movement of goods across the land-border remain ongoing and it is judged that the disclosure of this information at this point would be likely to prejudice the UK’s relationship with the EU.”

The Department of Justice in the Republic of Ireland also refused to provide information relating to immigration enforcement, the CTA, and data sharing arrangements with the Home Office.

The Republic’s Justice Department said the matters were the subject of negotiations and also cited security grounds among the reasons for refusal.

The Detail previously reported on the need for greater transparency on immigration enforcement in the Republic of Ireland after it revealed that 28,000 people were refused entry to the Republic between 2008 and 2016.

New figures published by the Irish Times this week show that close to 4,000 people were refused entry to the Republic in 2017 of which 3,140 were removed from the country.