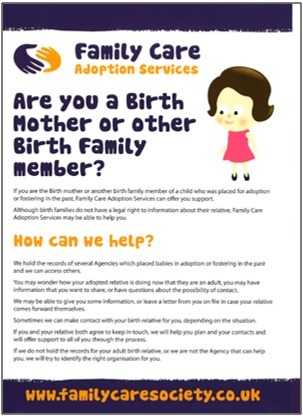 MAGGIE McSorley is the chief executive of Family Care Adoption Services which offers a research, counselling and support service to adults raised in adoption or care and to birth families seeking information.

Among people contacting the organisation for help are the children of mothers who were in mother and baby homes decades ago.

Ms McSorley said: “It’s only since 1987 that adopted adults have had the right to their own birth information. So before this birth mothers believed that their children could never look for them. They were told not to tell anyone that they had had a baby or had been in a mother and baby home.

“Society’s attitude to unmarried mums was very negative; the girls were held responsible for being pregnant and often were sent away. If your family did not support you with a baby you really were on your own then. There was no housing, no benefits, no support.

“Homes were places the pregnant girls went to hide their pregnancy. Some had the facilities for girls to come back with their babies for a while. In others, the baby would go into a baby home. For example, around 100 babies a year would have been going into Nazareth in Belfast in the 1940s.

“The purpose of most of the baby homes was to place babies for adoption and some of the mother and baby homes were also approved to do that.”

Ms McSorley said that reports about what happened in mother and baby homes including claims of illegal adoptions and the treatment of women have been very “unsettling” for adopted adults.

“This issue also impacts on thousands of adopted people. They understand adoption to have been a legal process, with consent papers which would have been signed after babies were six weeks old.

“It is difficult for them to hear of birth mothers who do not recall signing consent, and it has been our experience on occasion that some mothers do not remember signing papers, often because they were so traumatised by their whole experience.

“These women were far from home and on their own. They were told to move on and forget about what had happened but they couldn’t just move on from something like that.

“I have met some birth mothers who do not remember their child’s exact date of birth as a result of the trauma they suffered.

“There are also many birth mothers who still have not told anyone that they had a child and do not want to go back to it. Everyone’s experience is different.

“We also need to acknowledge and consider the needs and feelings of families who adopted children in good faith, whose birth mothers had been in mother and baby homes.”

Many adopted adults have contacted Family Care Adoption Services for help in tracing their birth parents.

Ms McSorley said: “If an adopted adult contacts us, and we are the right agency to help them, we research their information and when we have identified the birth mother, we write her a letter.

“We offer to go and see her and talk to her. We reassure her that we haven’t put anything on social media, have not shared their address or other personal information, and that it is not our job to tell her husband or any other children anything without her permission.

“Virtually every woman I have spoken to says they have thought about their child every day and most have a great fear that their child will 'hate them' for giving them up.

“We can tell them that their child is alive and well and maybe has a family. We can then help them to exchange letters and information and get together if they want to.”

Receive The Detail story alerts by email
"Why did my brother die and I survived?"
Dr Michael Watt: ‘Shocking’ report into deceased patients’ cases published