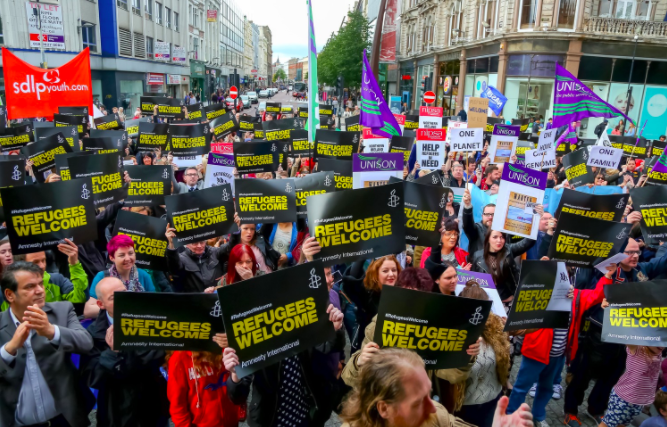 A total of 7,455 people were refused entry at Irish ports, airports and the land border in 2019, according to figures published by Eurostat.

The vast majority of ‘leave to land’ refusals took place at Irish airports (6,670), with the remaining taking place at Irish ports (320) or the land border (465). Dublin airport accounted for more than 80% of refusals in 2019.

The top nationalities refused entry in 2019 were Albanian, Brazilian, South African, Bolivian and Georgian. Together they accounted for almost half of all refusals from over 80 nations.

While there was a rise in refusals across the board, the sharpest increase (179%) was for Albanian nationals. There was also a 25% increase in Georgian nationals being refused entry.

Late last year, officials at Dublin airport began specifically targeting Albanian and Georgian nationals, moving immigration checks from the terminal to the steps of the aircraft.

The Immigrant Council of Ireland said that this process effectively barred certain nationalities from claiming asylum. This, they said, is illegal under Irish, European and international law in which everyone has the right to claim international protection.

The measures were highly controversial and were criticised by a number of migrant rights charities and legal experts.

There was an overall 30% increase in new asylum applications last year, from 3,670 to 4,780. However, Ireland still only processed 0.68% of the total number of European Union (EU) asylum claims in 2019. Population-wise, Ireland is around 1.1% of the EU population.

Albania and Georgia were the top countries for asylum in 2019, followed by Zimbabwe, Nigeria, and South Africa.

Leading government figures, including then-Taoiseach Leo Varadkar, had singled out rising asylum claims from Albanians and Georgians as a cause of concern, in comments labelled ‘dangerous’ by migrant rights charities.

Asylum claims from these two so-called ‘safe countries’ rose steadily throughout 2019, but have dropped sharply since the introduction of the new policy last October, according to figures from the International Protection Office.

Fiona Finn, CEO of the migrant and refugee rights centre Nasc, said the previous government “appears to have deliberately misinterpreted what it means to be from a country that has been designated as a ‘safe country’ by the EU".

She added: "In fact, it does not preclude a person from claiming asylum and the numbers of Albanians and Georgians who go on to be recognised as refugees show that the risk of persecution is very real."

The Department of Justice said that in response to increased volumes of false documentation being presented, and to identify which plane persons carrying such documentation arrived on, the amount of checks conducted at the point of exit from the plane were increased during 2019.

They added that there has been no increase in Albanian and Georgian nationals being refused entry to the state in 2020. The Irish Times reported in February that Garda and security sources had stated that the heightened checks had since been scaled back or completely stopped.

The high number of refusals in 2019 could be to be the highest on record, and are around twice the annual average. Eurostat figures go back to 2008, when the last highest figure was recorded – 5,260. Over 35,000 people were refused entry to the state in the last decade.

The grounds for refusal listed by Eurostat are an umbrella version to cover the various systems of 27 EU states. In practice, Irish legislation covers 11 grounds on which ‘leave to land’ is refused. A requested breakdown was not provided by the Department of Justice.

People cannot appeal refusals, and charities have long raised concerns about the ‘subjective’ nature of decisions and limits to legal representation.

There is “a worrying lack of transparency around refusal of leave to land at Irish borders” said Nasc CEO Fiona Finn, who called the rise in refusals “deeply concerning.”

“The decision to refuse a person leave to land is a subjective decision by the Immigration Officer and there is no appeals mechanism for people who believe that a decision was made in error nor is there a complaints process for those who are treated improperly.”

Paloma Aparezida Silva-Carvalho, a Brazilian national who previously worked as an au pair in Galway, made headlines in 2017 when she was erroneously refused entry and detained in Mountjoy Prison when seeking to enter Ireland for a holiday.

Similarly, Chilean woman Estefany Carolina Alquinta Gonzalez was held in solitary confinement for more than a week in Mountjoy Prison earlier this month after being refused entry. Charities believe there are many more such individuals whose cases are not heard.

Garda did not respond to requests for the number of those detained after being refused entry.

Ireland is largely alone in Europe for detaining people in prisons for immigration offences. A new dedicated immigration facility at Dublin Airport, announced in 2017, is not yet completed.

It is not clear if they subsequently made claims for asylum.

The Immigrant Council said that “it was very concerning to hear people from countries like Syria and Yemen were being refused, recognising they are among the top source countries for refugees".