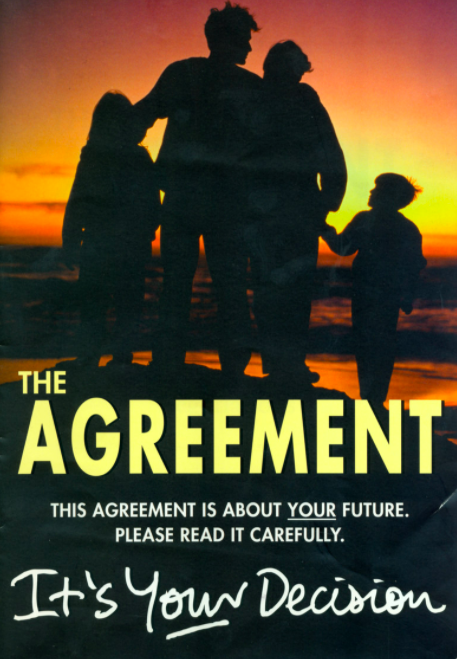 Almost 25-years after the Good Friday Agreement, relationships north-south and east-west are evolving and changing. In this context, what are the issues that are relevant and to be considered as we think of our future? The Detail is publishing a series of articles which will explore daily cross-Border activity on the island of Ireland. Below, the former editor of the Impartial Reporter newspaper, Denzil McDaniel, introduces the series while in the first of our stories, Rory Winters examines current all-island health services through the work of the All-Ireland Institute of Hospice and Palliative Care.

A project in Clones, County Monaghan has been recording the experiences of people living along both sides of the Border, and one man recalls hearing his grandfather’s memory of the immediate effects of partition in 1921.

“It was like a hatchet coming down and destroying trust, friendships and neighbourliness.”

A book “Clones-Bordering on Brexit” by the Clones Family Resource Centre will detail the practical difficulties and hardships of everyday life caused by the sudden creation of two jurisdictions which then developed separately on a small island.

For the first half of the century, whether in the Free State or Northern Ireland, the overwhelming sense is that people just got on with it, even when the Border became a hard one in the security crisis of the Troubles which saw numerous cross-Border roads physically closed.

One farmer built his own makeshift road, nicknamed the Khyber Pass, to get his milk to the creamery.

The spirit of getting things done to make the Border effectively invisible was outwith political considerations, respecting identity and territory and was simply the manifestation of the pragmatism of making life a little easier. People got things done and continue to do so.

Since the Good Friday Agreement of 1998, the natural coming together of both jurisdictions in north-south co-operation has grown exponentially on an all-island basis to the benefit of both. Notwithstanding the sensitivities of a debate over potential constitutional change, there appears to be an acceptance of the benefits in transcending Borders to improve lives when it comes to non-controversial matters where sharing will enrich society.

It’s estimated that there are 156 official points of north-south co-operation, with an alignment in a range of issues and interests from business, workers rights, sport, waterways, climate change and much more.

A series of articles prepared by the website www.thedetail.tv has examined a number of subjects where collaboration exists between north and south, some through formal links and some evolving through generic community links.

It shows that thousands of sports people traverse the island every week to engage in competition and socialise; that the Irish Congress of Trade Unions (ICTU) is unique in Europe in representing workers in two different jurisdictions, and an All Island Institute of Palliative Care (AIIHPC) says they learn from each other’s systems and ideas in helping make a difference to people across the island who face life-limiting illness.

An Taisce, the National Trust for Ireland, has been taking an all-island approach to a number of environmental issues.

It may be starting to become trite to say pollution, climate change issues and the virus know no Borders, but it is a maxim which is being taken seriously by many interests who see common challenges and see real benefits for both sides of the Border in collaborating when our values are shared.

Considering one of the main causes of early death across Ireland is cardiovascular disease, it’s crucial that the British Heart Foundation in Northern Ireland and the Irish Heart Foundation should engage on many issues. As partners in the European Heart Network, there is nothing political in their work aligning in matters such as CPR training.

The head of the BHF, Fearghal McKinney says that since 2019 they have been collaborating closely on the impact of air pollution on our heart and circulatory health. The BHF have funded over £5 million of research in this area demonstrating the health impacts of air pollution. This research and evidence base has been shared with IHF and informed policy priorities in this area. IHF have attended BHF NI events on the topic and the two organisations work together on Ireland’s first Climate and Health Alliance, established in 2019 by IHF, which includes stakeholders from all over the island of Ireland.

They have jointly written to government Ministers in both jurisdictions outlining the measures they wish to see implemented to improve air quality on the island and in April 2021 issued a joint press release calling for an island-wide ban on the domestic burning of smoky coal, sod turf and wet wood.

This collaboration is a good example of real benefits for health and tackling air pollution. It is one of many projects to benefit from the The All-Island Fund, a collaboration between the respective philanthropic Community Foundations north and south.

The Community Foundation for Ireland’s work is informed by 5,000 voluntary, community and charitable groups working across the 26-counties. Some of the organisations have been highlighting the need for strong civil society voices in an all-island context, during 2020 this need came into greater focus as Brexit became reality. In addition to communities highlighting their desire for greater co-operation with those in Northern Ireland, The Foundation was contacted by donors keen to support work in this area.

In late 2020 a partnership was formed with The Community Foundation for Northern Ireland with a view to making an All-Island Fund a reality which would support collaborations between liked minded voluntary, community and charitable groups on both sides of the border. Partnerships would allow the sharing of research, knowledge and experiences which would deliver dual benefits

Speaking on the pilot fund, Denise Charlton, Chief Executive of The Community Foundation for Ireland said: “The Community Foundation model is unique. It is so much more than a channel for funding, it is about listening to our 5,000 voluntary, community and charitable partners and using their expertise to identify emerging issues and responding. It is clear there are many complex issues where we are all better off by tackling them on an All-Island basis. We have shown through the success of the pilot All-Island Fund the demand is clearly there. The challenge now is to work with communities, our donors and hopefully Governments to take it to the next level.”

Health is also a major area of debate and is one of many topics being discussed in a series of dialogue events for the Taoiseach’s Shared Island initiative which has been an important vehicle for fostering greater understanding of all-island solutions for common problems.

Far too often the north-south debate is skewed by issues of identity, flags, emblems and a Border poll; all of which must be discussed. But under the radar, civic and social issues that transcend Borders are being addressed.

But on the ground across the island, the pragmatism of seeing tangible mutual benefit from working together, from fostering friendships to taking advantage of economies of scale often trumps wider political considerations.

It’s a new future that’s taking shape; a very different scenario to the stand-off of the two jurisdictions years ago. But it’s vital in building relationships and connections to address today’s circumstances.