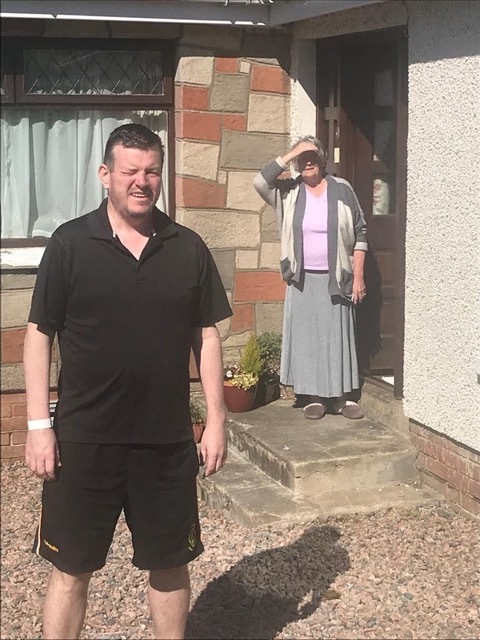 Niall Murphy with his mother, Brigid, after leaving Antrim Area Hospital where he was treated for COVID-19.

THE prominent Belfast human rights lawyer, Niall Murphy, has left hospital and is now back home with his family having spent almost four weeks fighting for his life after contracting COVID-19.

Reunited with his wife Marie, and three children, aged 12, 11 and 7, Niall paid tribute to the doctors and nurses at Antrim Area Hospital who fought to save his life.

He said it had been “humbling and inspiring” to witness the dedication and professionalism of those who cared for him.

“My mother would have a very strong faith and prayed that my bed would be guarded by angels.

"And it was, by the doctors, nurses, physios and staff of the NHS.”

“I was in a coma for 16 days and was obviously oblivious to everything but the hardest toll was carried by family.

“At one stage, Marie was advised that it was 50/50 if I would pull through.

“I’m only now coming round to appreciate the danger I was in but my wife and family had to live with it in real time,” said the partner at the high-profile Belfast legal firm, KRW Law.

In early March, he’d taken on a series of speaking engagements abroad and believes that he contracted the virus at some point on the trip.

“I had been invited to New York by the Brehon Law Society to speak at their annual St Patrick’s Day dinner on Tuesday, March 10th.

“I also had some engagements on behalf of the Ireland’s Future group. I had flown to New York from Glasgow where I’d had some similar talks, so I was fairly tired on the flight home into Dublin.

“I think I either picked it up in the taxi to the airport, at the airport or indeed, on the plane itself.”

After returning home on Thursday March 12th, he went straight back to work and spent the following day in the KRW Law office.

That evening, Friday 13th, was due to be a big night in his role as vice-Chairman of Naomh Éanna CLG club.

Having won the Ulster Intermediate Championship, the club had planned a night of celebration. But just 24-hours earlier, the event was cancelled due to mounting concerns about the threat of COVID-19.

Niall Murphy supported the decision to cancel, not realising the imminent threat to his own life.

“I had a full day of court and consultations, catching up on paperwork. I left the office and picked up a chinese takeaway on the way home.

“It was as I sat down for dinner at about 8 pm that I began to feel not 100%. By bed time I knew I wasn’t well but thought it was the exertions of the previous week and hoped to sleep it off.”

“On Saturday morning 14th, my temperature was over 40, so I knew I had to isolate myself which I did. That in itself was a torrid time. I didn’t leave bed and no appetite whatsoever. I couldn’t get the temperature down.”

“Our Naomh Éanna club doctor, Dermot Maguire kept an eye on me and ultimately advised I should go to hospital as the symptoms weren’t lifting.”

Niall went to his local hospital on the afternoon of Wednesday, March 25th. He tested positive for coronavirus and was immediately transferred to the hospital’s Intensive Care Unit. There, he was placed in an induced coma and put on a ventilator.

He was critically ill. 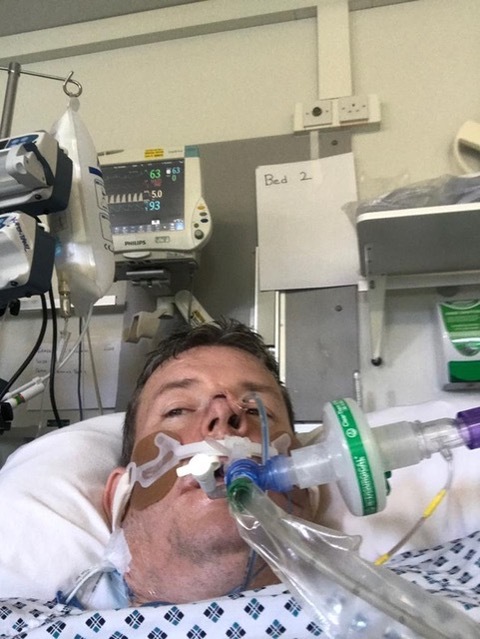 “I have never been sick before or in hospital other than sports injuries and the children being born so I haven’t had any real appreciation of what goes on in hospitals.

“I do now. When you are in ICU you’re totally incapacitated and everything is managed by staff. The dignity that they restore in the patient, every patient, is both humbling and inspiring."

Over the course of the following 16-days, Niall Murphy fought for his life in Antrim Area Hospital.

His wife, Marie, waited by the phone for daily updates from the hospital. There were days when there was little news, only that Niall remained in a critical condition.

One evening, on an update call, doctors warned her there was only a 50-50 chance her husband would survive.

Word spread of just how ill the 43-year-old lawyer was.

Candles were lit in homes all over Ireland in support of Niall, Marie and their three children.

Gerard McNamara, one of Niall's partners in KRW Law, came up with the idea of starting a 'letter to Niall'.

Responses came in from all over the world. From people who knew Niall and from those who’d never met him.

Mark Thompson, of campaign group Relatives for Justice, said: "We always knew that Niall was highly regarded and respected but we were really overwhelmed with the volume of messages from friends and supporters across the US, Canada, Australia, Europe and Britain."

Tom DiNapoli, the New York State Comptroller, was one of those who sent their support.

"Importantly, the countless positive and hopeful messages from the families we work with were so inspirational in terms of giving back to someone who has given so much to them. It was their turn to battle for Niall," Mark Thompson added.

"We're so relieved that he's on the mend. Our gratitude to all the doctors, nurses and entire healthcare team. We've our dear friend back."

In one of the responses, former Senator Edward Kennedy advisor and President of the US-Ireland Alliance, Trina Vargo, wrote: “Many people are thinking of you and praying for you, even many of us who you don’t know personally.

“I am in awe of your tenacity in helping others.

“Sending good thoughts in hopes we can tenaciously help you.”

London-based BBC presenter, Clare McDonnell tweeted: “Don’t know why but I’ve followed Niall Murphy story since he was hospitalised, maybe because he was one of the first in Northern Ireland and I’ve family there.”

Kevin Winters, founding partner at KRW Law, said that seeing “a big fit, resilient man” struck down had been a shock to everyone.

“It shows just how indiscriminate this disease is.

“I’ve no doubt the collective will of the worldwide supporting messages helped Niall and his family get through these difficult days,” he added.

"It took me hours everday thanking people from Ireland, Britain, Europe and America for their messages.

"Thousands of messages came through. It was truly overwhelming and I won't forget it."

He continued: “Through the many varied sources of support I felt Niall's battle with this insidious virus helped galvanise a shared instinct for survival that cut across all boundaries political or otherwise.

"In times of a life threatening crisis like this I think that's a really positive, life affirming legacy.”

Slowly over the week leading up to Easter, Niall’s condition improved. He was turned from lying on his chest, to help the lungs fight the virus, to being on his back.

Then, on Good Friday, Niall’s doctors allowed him to be wheeled out of ICU, to the applause of the nurses and doctors who had treated him. A video of the move was uploaded and shared on social media, described by author and journalist, Susan McKay, as “Niall’s Easter Rising.”

“The image of Niall leaving Antrim ICU is one of the defining moments of this era,” Kevin Winters said.

“His defiant thumbs-up and the sheer joy and relief on the faces of the staff packs an emotional punch that will live long in the memory.”

Back home, the lawyer has a long period of recovery ahead. However, as he reflects on the fact that his life was saved by dedicated NHS staff, he speaks with typical passion (click here to view an article written by Niall Murphy).

“If I was a nurse and Matt Hancock came near me with a badge he’d be picking a window. In France, medical staff were given €1,500. That should happen immediately. Not a badge.”

“As a society we should be ashamed of ourselves as to how we treat and resource the NHS.

“These people are the equivalent of the firemen who rushed into the Twin Towers on 9/11 yet we have asked them to confront this crisis with insufficient PPE. That’s a disgrace.

"We should be ashamed at the fact that nurses had to strike in the darkness of winter for pay parity,” he said.

“We should also recall that the current government voted against pay rises for the NHS and no amount of honeyed words about the great treatment he received (from nurses who would have residency problems ironically post-Brexit) from Boris should distract from that. An immediate rise and sustainable pay structure should be immediately considered by Parliament. Student loans for doctors should be cancelled if they are working in the NHS.

"How would you pay for this? Simple. The wealthy should pay more in tax.”

The old Niall Murphy is back with us. Standby. 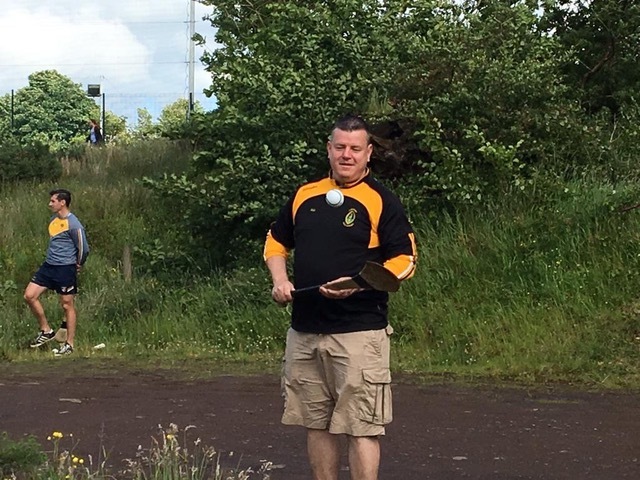