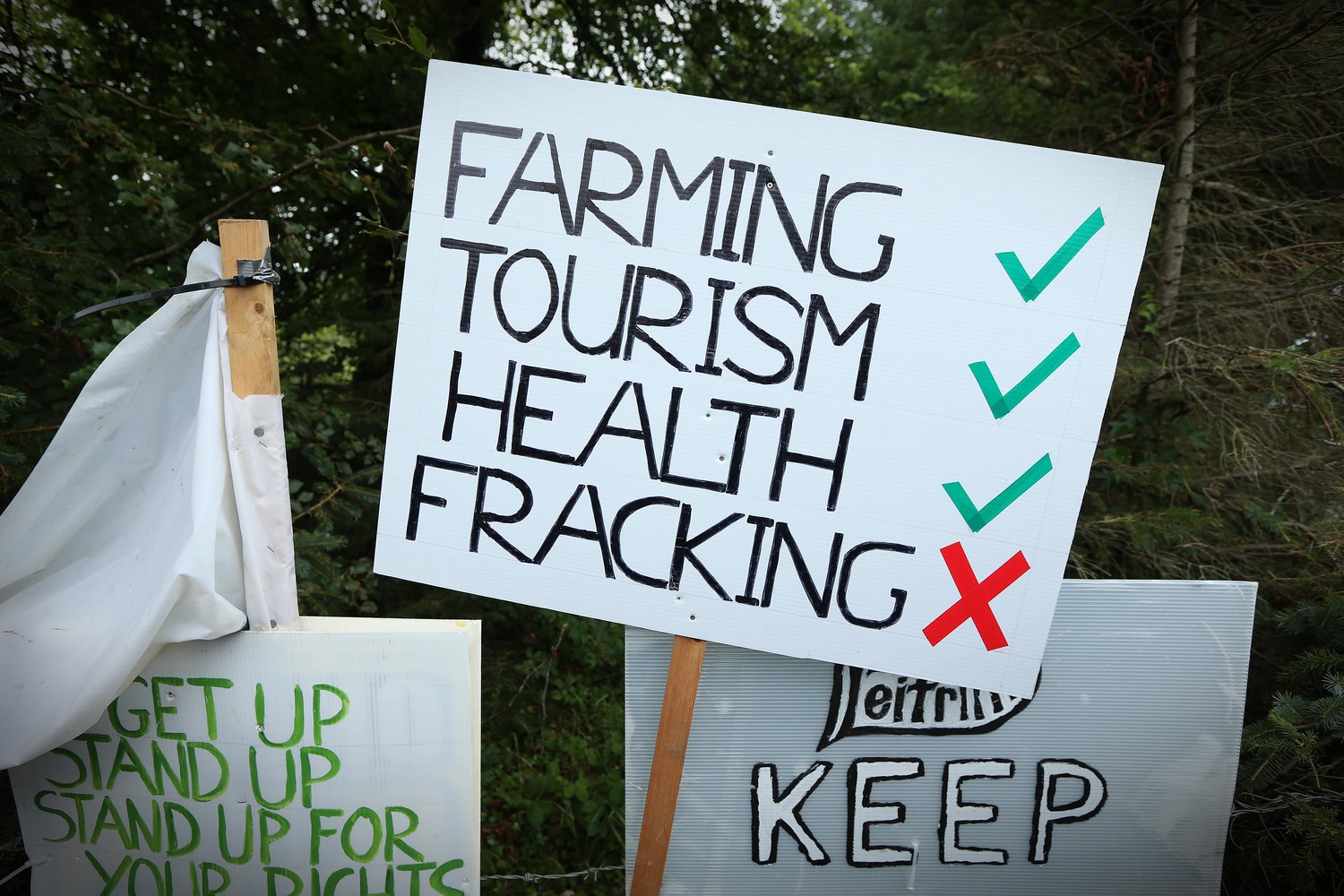 Signs made by protesters at an anti-fracking demonstration in Belcoo, Fermanagh. Photo by Kelvin Boyes, Press Eye.

CONCERNS have been raised about government-commissioned research examining the impact of fracking in Northern Ireland.

The Department of Economy (DfE) tasked Hatch Regeneris, a social and economic research consultancy company, to carry out the work 10 months ago.

Hatch Regeneris’ report has not yet been published and the DfE could not tell The Detail when it will be. However, concerns have been raised by groups opposed to fracking in relation to the DfE’s commissioning of the research.

The company was contracted to assess the “economic, societal and environmental impacts of future onshore petroleum exploration and production, including unconventional oil and gas (UOG)” in October 2020.

Fracking, also known as hydraulic fracturing, is the process of drilling into the earth before a high-pressure water mixture is directed at the rock in order to release natural gas. Water, sand and chemicals are injected into the rock at high pressure allowing the gas to flow out to the head of the well.

A number of groups in Fermanagh who’ve been campaigning against fracking in the area have voiced concerns about the commissioning of the report, its cost and its scope.

Independent Fermanagh and Omagh councillor for Enniskillen, Donal O’Cofaigh, told us there is “real fear” within his area that fracking will happen, adding that the report is “cutting above the heads of the community”.

He also said: “The report is merely a desktop study, looking at existing evidence and data.”

Tom White, of Belcoo Frack Free, told The Detail: “The cost of the report, estimated at around £70,000, is insufficient to carry out a full and comprehensive report into the issues at hand.”

In addition John McElligott, from the group Safety Before Liquified Natural Gas (LNG), said the report is “merely a political tool”, and that he’s concerned there has been a lack of independent oversight of the work that has gone into it.

Meanwhile, the DfE told The Detail that the research “has been overseen by a steering group” which includes “officials from across the DfE Energy Group, Geological Survey Northern Ireland (GSNI) and the Northern Ireland Environment Agency (NIEA)”. However, all of these are government agencies.

Mr McElligot also believes the DfE commissioned Hatch Regeneris to carry out the research to overcome conditions set out within the 2015 Strategic Planning Policy Statement (SPPS).

The SPPS adopted a precautionary approach in relation to the extraction of unconventional hydrocarbons (including gas) stating that there would be a “presumption against their exploration until there is sufficient robust evidence on all environmental impacts”.

However, the DfE maintains the research was commissioned to “inform the development of future petroleum policy options for consideration by the Executive”.

In 2017, the Dublin government passed legislation which banned fracking. Meanwhile, there are currently moratoria on fracking in England, Scotland and Wales, but not in Northern Ireland.

The DfE said these moratoria were “cited in the specification” for the Hatch Regeneris fracking research and are “being considered as part of the report”.

Sinn Féin says its bringing forward a Private Members Bill to introduce a legislative ban on fracking in Northern Ireland. The party told The Detail it expects this to progress to the floor of the Assembly in early autumn.

There are also calls for the Climate Change Bill sponsored by Clare Bailey, to include a legislative ban on fracking.

However, there is no confirmation – as things stand – that it will include this.

In October 2020, the same month as the report was commissioned, the Green Party’s Rachel Woods brought forward a motion calling for the Executive to introduce a moratorium on fracking in Northern Ireland. MLAs displayed widespread support for Ms Woods’ proposal and the motion was passed, however, the necessary steps to implement a moratorium have not yet taken place.

The then Minister for the Economy, the DUP’s Diane Dodds, advised the Assembly that she would not be supporting Ms Woods’ motion on the basis of advice her department had received.

Mrs Dodds said this advice indicated that a moratorium on fracking “would, most likely, be subject to challenge”.

She continued: “Accordingly, my view is that the appropriate way forward is to undertake the Northern Ireland-specific research that my department is in the process of procuring.”

The Detail contacted the DfE to obtain further information regarding this.

We were told: “In advance of the October 2020 debate, the department received legal advice that the action proposed in the motion could be subject to a successful legal challenge and that the proper policy process should be followed.”

In the Assembly, Mrs Dodds said: “As minister with responsibility for this area, I am asking for the time and space to allow officials to develop evidence-based policy proposals that will be subject to a rigorous policy development process.”

Adding that the need for “NI-specific evidence was the basis on which the department decided to commission independent research”, Mrs Dodds continued: “Any change to policy or legislation needs to be based on evidence.”

The day after this Assembly debate, October 14, 2020, the DfE awarded the fracking research contract to Hatch Regeneris.

However Safety Before LNG’s, Mr McElligott, said: “Serious questions of trust, independence and credibility hang over how the DfE awarded the contract to Hatch Regeneris on the grounds that it had conducted similar research for the Welsh Government in 2015.

“This is following revelations from March 2021 that Regeneris had falsely claimed in the Welsh report that Public Health England and Public Health Wales were of the view that the ‘effects of individual exploration activities can be identified, assessed and mitigated to an acceptable level’.”

These concerns were brought to Hatch Regeneris by the members of the Fermanagh and Omagh Council at a meeting held on April 15, 2021. Hatch Regeneris told the council that the report produced for the Welsh Government was a “fair and accurate reflection of the position at that point in time”.

Hatch Regeneris also said: “The issue appears to be around interpretations of what Public Health England and Public Health Wales had said at various points.

“This was a report focusing on the economic consequences of development, therefore it was informing the Welsh Government’s decision making around economics rather than anything to do with public health”.

The DfE maintained the report will look into a ”wide range of existing research to analyse the impact of onshore petroleum activity” on societal issues, “including public-health”. 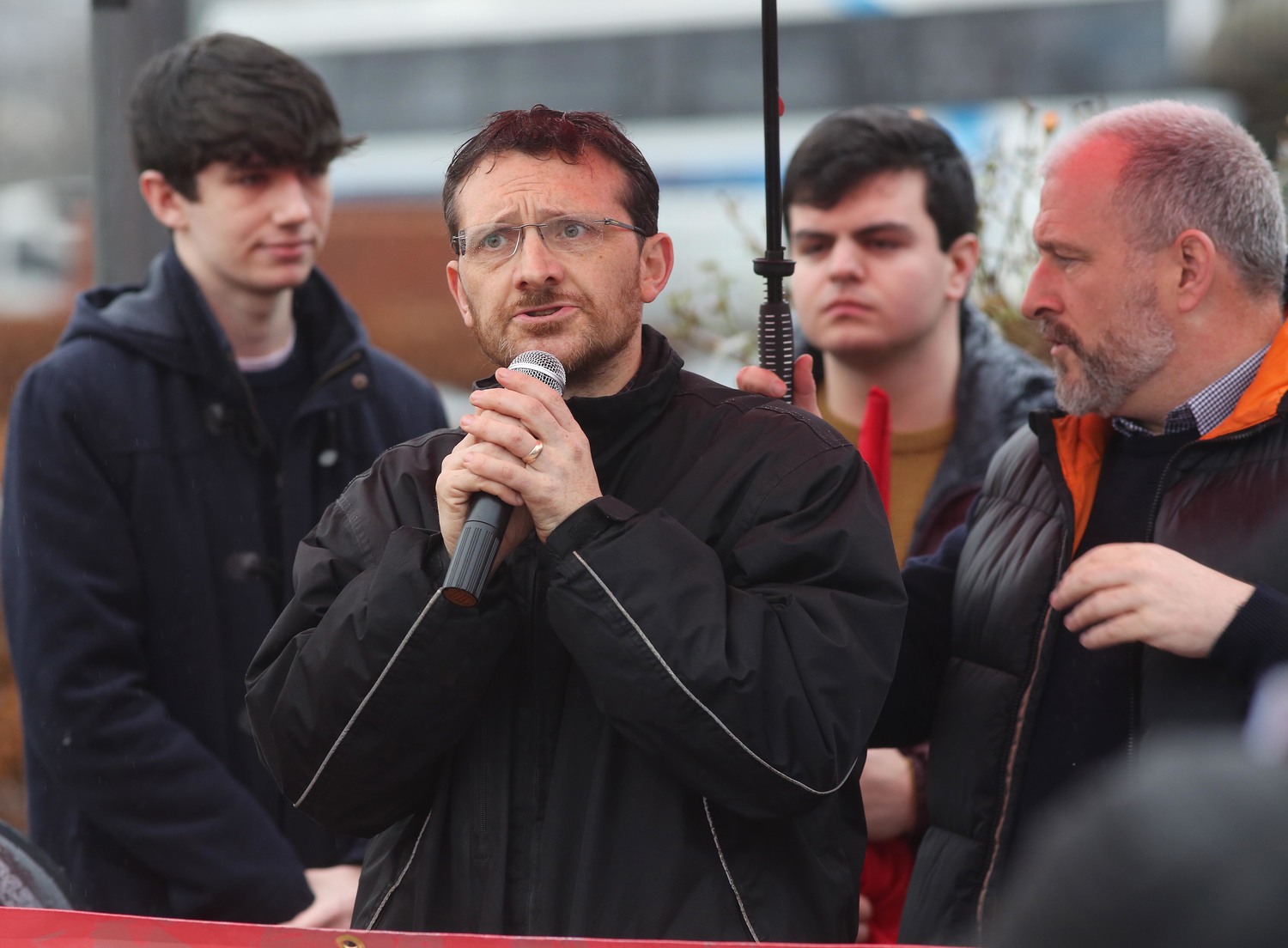 However, at the Fermanagh and Omagh District Council meeting on April 15, 2021, Hatch Regeneris acknowledged that it does not have a public health expert on the research team, adding that this was a “reflection of the strategic nature of the assessment they are undertaking”, which Councillor O’Cofaigh called a “major concern”.

Licenses for the exploration and extraction of oil and gas are granted by the DfE under the Petroleum (Production) Act (Northern Ireland) 1964. There are no active licenses in Northern Ireland, however, there are two pending applications both of which have been the subject of criticism.

A Northern Ireland-based company, EHA Exploration, has submitted an application to explore for petroleum in the basin of Lough Neagh, while Tamboran, with headquarters in Australia, has applied to explore for natural gas in Fermanagh.

Fracking uses chemicals which can leak into water supplies or cause pollution above ground.

Mr McElligott called fracking a “carbon intensive process” and said allowing it in Northern Ireland “would be incompatible with emissions reduction targets”.

While both applications currently do not include plans to use fracking, Tamboran previously did assert this as an objective in its application.

It was only around the time when Ms Woods’ motion on a fracking moratorium was being discussed in Stormont that it publicly emerged that Tamboran had, in March 2020, officially sought to remove the fracking proposal from its drilling application.

Mrs Dodds told the Assembly this came “very much as a direct result of the strength of opposition to this controversial technique, which was highlighted by the respondents to the consultation process”.

However, Mr McElligott is unconvinced that this means Tamboran no longer aims to frack in Fermanagh. He highlighted that Tamboran’s letter, in which the company spells out its desire to amend the application, relates specifically to just “testing of the well in Part II of the license application”.

Tamboran’s website also still refers to the use of fracking in its long-term plan in Fermanagh.

The Detail contacted Tamboran to clarify this. We also raised other issues highlighted in this article, however, the company declined to comment.

Meanwhile, the DfE said: “The proposed amendment to the work programme for application PLA2/16 removes the need to use high volume hydraulic fracturing, commonly referred to as fracking.”

Councillor Donal O’Cofaigh said: “The whole process to date has been a bit chaotic and has caused alienation and concern amongst the community.”

The Enniskillen councillor also commented on the terms of reference for the Hatch Regeneris research and said they included a “requirement for engagement with the community”, but that this didn't initially transpire.

He said: “Community groups were only contacted at the recommendation of the council.”

In addition, Dianne Little from Letterbreen and Mullaghdun Partnership (LAMP) Fermanagh told The Detail that requests to meet with Diane Dodds and Arlene Foster were not acknowledged.

She added that the possibility of fracking taking place in Fermanagh “added pressure to an already fractured and disadvantaged community”.

However, the DfE said: “The specification required that the research should involve desktop analysis in the main and targeted stakeholder engagement.

“On this basis, Hatch engaged with representatives from industry, government (in both NI and ROI), environmental groups and local councils.

“Following initial engagement by DfE with Fermanagh & Omagh District Council, councillors suggested that it would be useful to engage directly with a number of local community groups.

“Hatch then met on a one-to-one basis with those groups which agreed to engage as part of the research.”

Fermanagh and Omagh Council introduced a ban on fracking within its draft ‘local development plan’, however, correspondence from DfE to the council, dated December 2018, shows the department pushing back on this ban.

DfE’s Minerals and Petroleum Branch wrote to the council, stating there was “plenty of evidence” that risks from fracking could be mitigated against and reduced to an “acceptable level”.

However, the council’s position did not alter as a result of the department’s correspondence. The council subsequently passed a motion in October 2020 confirming this position.

Safety Before LNG’s Mr McElligott said it is “virtually impossible” to attain an acceptable level of risks from fracking. On the contrary, he said: “There is a wide range of existing research which has demonstrated the negative impacts.”

In addition, the DfE commenced a “wide-ranging” review into petroleum exploration and exploitation in 2019, the outcome of which it has said must take account of its “proposed Energy Strategy and broader Executive commitments”.

However, it also said: “The Hatch research report will not make recommendations on future policy or licence decisions.”

The Detail contacted Hatch Regeneris about the issues raised in this article, however, the company declined to comment.