Taking the future of our shared island seriously: a growing conversation 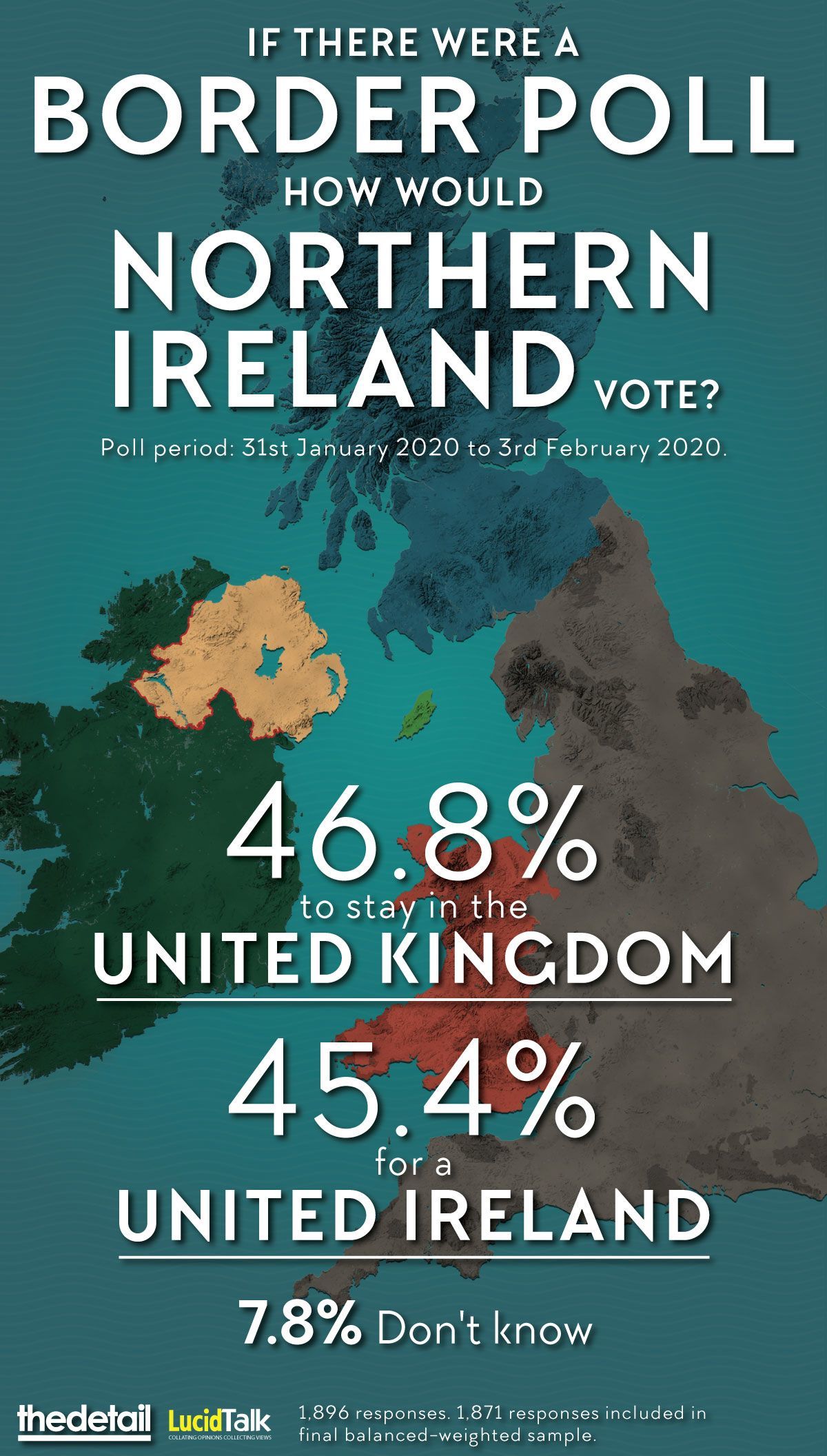 SERIOUS reflection on the constitutional future of the island of Ireland is emerging. The evidence suggests an urgency that has been absent thus far.

The proliferation of interest is remarkable, with a local and global focus that feels qualitatively different. The success of Sinn Féin in the Irish general election is feeding further speculation, as a political party that has made proposals for a way forward, including a timeframe.

But it is arguably Brexit that is changing the political weather, and is disrupting the underlying dynamics of debate across these islands.

The wisdom of removing constituent parts of the UK from the EU without their consent will be debated for decades. It has thrust the prospect of a united Ireland and Scottish independence centre stage.

That is despite the occasionally shrill warnings issued to those who venture onto this territory. The negative response itself is instructive. It says something about the conservative institutional cultures that still dominate this island, as well as the smug complacency of those who equate faith in the status quo with ‘neutrality’.

There remains substantial governmental and official reluctance to enter this growing conversation in a meaningful way. That may change, and the evidence increasingly indicates that it needs to.

Why has this moved up the political agenda so rapidly? Why are so many now contemplating this question and these options? There appears little doubt that Brexit has altered the picture.

The UK is now out of the EU, although there is a transition period until the end of 2020 (that may be extended). Part of the island is in the EU, and part is out.

The border is an external border of the EU; all achieved without majority support in Northern Ireland. The fact that Brexit was advanced in this way will likely not be forgotten, and will inform the constitutional conversation on this island in the next decade.

In the midst of this, the EU has confirmed (in April 2017) that Northern Ireland will automatically return in the event of reunification; thus ending speculation on precisely that point.

Those who so vehemently argued for remaining in the EU have a return option. A special arrangement will be in place for Northern Ireland that may mitigate some concerns, even if it falls short of full-fat EU membership.

Will that come to shape the discussions ahead? Might Irish unity be viewed as the better long-term bet when assessed against this messy and complex compromise?

Some constitutional context is required. The Good Friday Agreement contains the principle of consent: the idea that the constitutional status of Northern Ireland rests only on majority support (and not, for example, the threat of the use of force).

The right to self-determination is the corollary of this, and there is a mechanism in the agreement for the exercise of that right. It is recognised in the constitutional legal orders of both states, and is underpinned by international law.

There will be ‘concurrent referendums’ north and south, a reason why the term ‘border poll’ can be so misleading. And although there has been debate about what should constitute electoral success in the north, it is clear that it must be 50+1: all that is required is majority support.

The Secretary of State for Northern Ireland (currently Brandon Lewis), has responsibility for triggering the process, with a general discretion to do so at any time that shades into an obligation when it appears likely that a majority would vote for Irish unity.

Mr Lewis, or any future Secretary of State, retains flexibility on what evidence to take into account in reaching this conclusion, and that fact has been criticised by those who would appreciate more clarity.

The tendency to argue that this leaves everything to the British Government neglects the continuing constitutional obligation contained in Article 3 of the Irish Constitution (Bunreacht na hÉireann), the fact that the right to self-determination inheres in the people of the island of Ireland alone, and that there will be ‘concurrent referendums’.

Those who take their responsibilities within the Irish state seriously will know that Ireland cannot stand by and watch this unfold without extensive preparation. This island is heading towards these referendums.

Whether that is within five or ten years is a matter for political debate. But by 2030 it is reasonably certain that the principle of consent will have been tested. No one committed to the Good Friday Agreement should be surprised by that.

There is no excuse for avoiding the work involved in managing the potential for constitutional change that will arise.

The Detail and LucidTalk have added in a significant, welcome and timely way to an evidence base that supports the necessity for proper planning and preparation. The exit polling following the Irish general election (IrishTimes, Ipsos and MRBI) indicated that 57% responded positively to the following question: do you think there should be referendums north and south in the next five years on Irish unity or not? In the age range 18-24 the figure was 75%.

What does the evidence from The Detail-LucidTalk polling suggest about views in Northern Ireland? There is continuing and strong support for the Good Friday Agreement, and recognition that the conversation about the constitutional future of Northern Ireland has intensified.

Brexit is accepted as central to that. There is an expectation that this island is heading towards referendums, within the next decade and possibility within the next five years.

On the main constitutional question – support for the union or a united Ireland – it is effectively ‘neck and neck’ (with a slight majority for the union). Intriguingly, when this is cast as a way back to the EU the unity argument pulls ahead, as it also does in the 18-44 age-group.

There is strong support for an all-island Citizens’ Assembly to deliberate on these matters, as well as for more clarity on the criteria to be used by the Secretary of State. There is a mixed picture with respect to structures, but it appears that some form of federal/quasi-federal option is preferred (a power base in Dublin and Belfast). 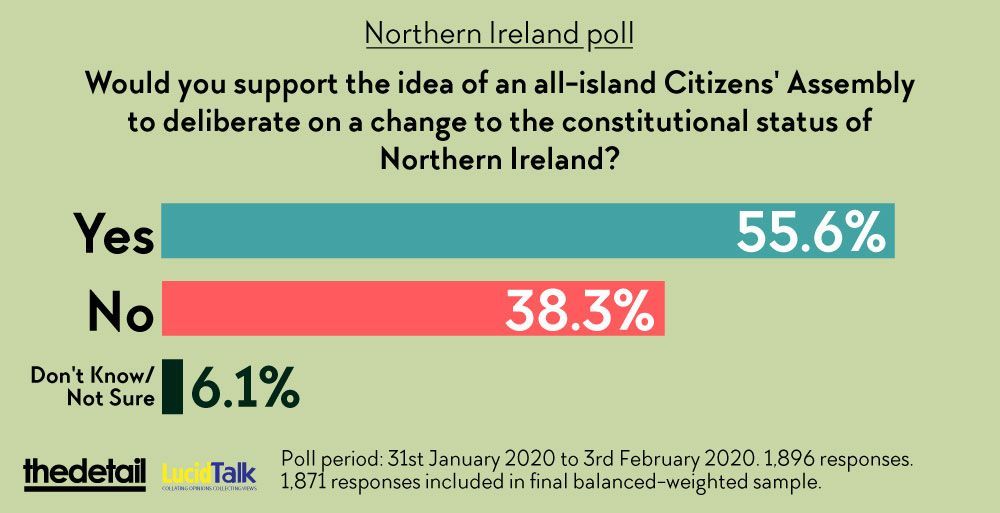 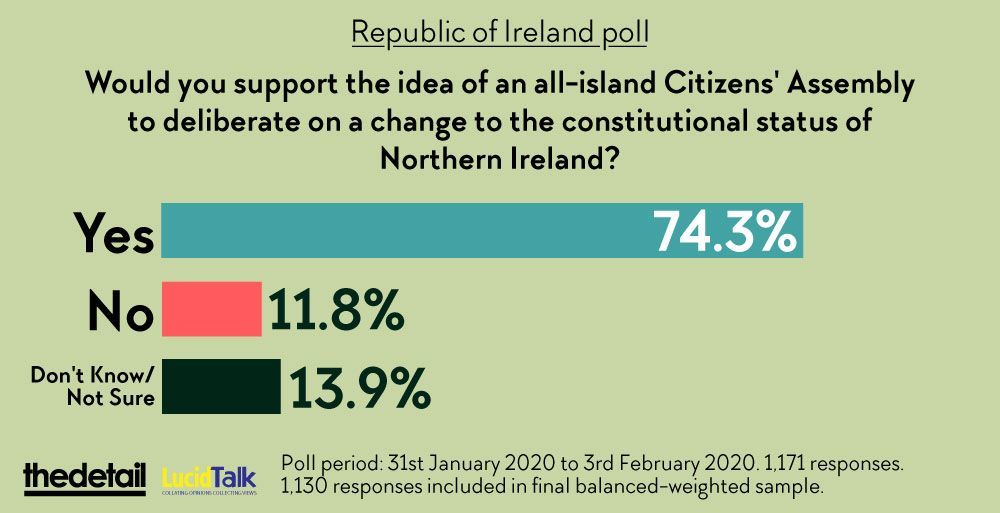 The results for the Republic of Ireland indicate strong support for Irish unity, with the majority favouring referendums within the next five years (confirming the outcome of the exit polling noted above).

The idea of a Citizens’ Assembly also clearly finds favour. The evidence also indicates what matters most to those polled, and those on either side of this constitutional debate will absorb that into their strategic thinking about framing relevant narratives.

How should these results be interpreted? Views will no doubt differ but, in my view, the trend is plain: it increasingly looks like support for the current constitutional arrangements is on a knife-edge. That is simply remarkable.

It shakes the legitimacy of the foundations of the existing constitutional order. The constitutional question could go either way, with the prospect of EU return proving attractive to those pondering Irish unity.

Unionists will correctly point to their small lead in this poll on the main question, and therefore the absence of majority support for Irish unity, but the evidence from the different age-groups will prompt reflection, as will the size of the lead.

Nationalism will note the impact of the pathway back to the EU, and view this all as too close to call; encouraging when serious campaigning is still to begin. Brexit has handed nationalism a powerful advocacy tool: a united Ireland within the EU.

But the overall trends provide reasons to believe that constitutional change is within reach in the next decade.

A plausible case can be made that this island is heading for referendums, possibly as soon as within the next five years. Whatever position is taken on the constitutional future of Northern Ireland these results confirm, in my view, that it is time for government-led contingency planning, supported by an all-island Citizens’ Assembly, and British-Irish intergovernmental cooperation on the parameters of the process.

This cannot be left to drift any further. No one who takes the future of everyone on this island seriously can afford to ignore what this new evidence is telling us.

Ignoring it looks reckless and irresponsible when mature and prudential management of possible constitutional change is required.