The Detail wins string of awards for "consistently outstanding" journalism 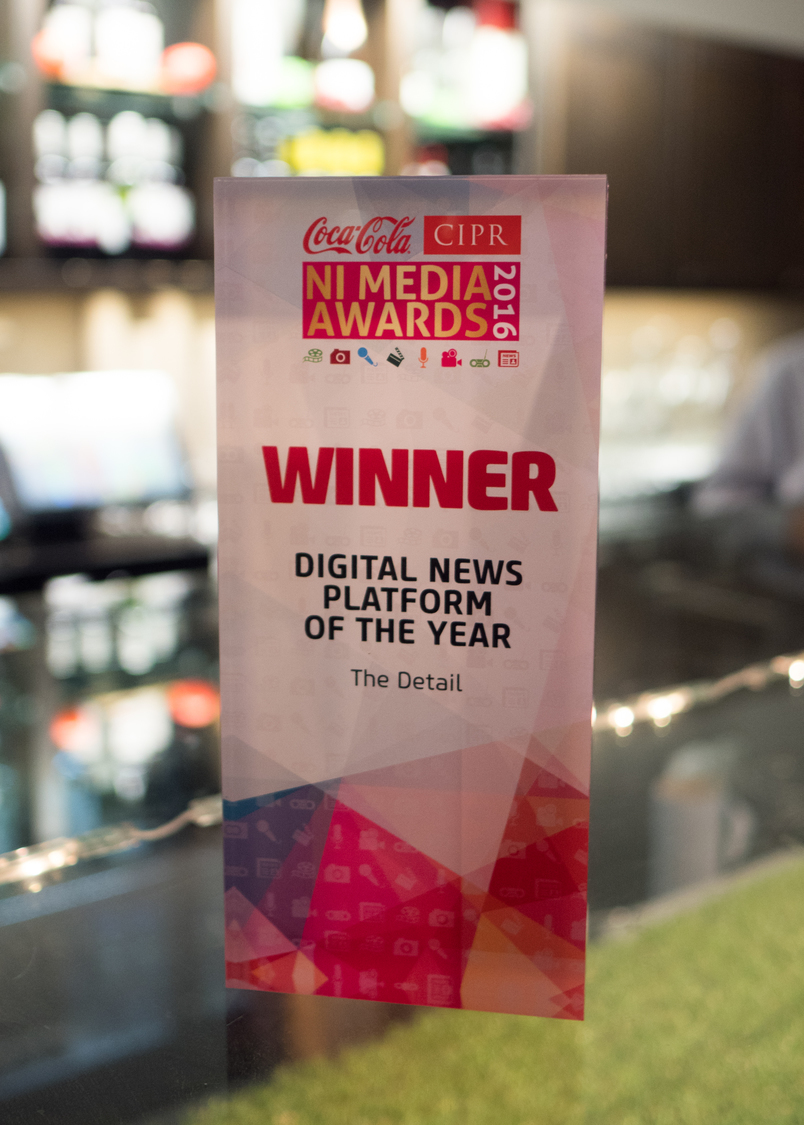 THE Detail won a string of accolades at the annual Northern Ireland media awards where judges described the website as “a triumph for journalists determined to hold power to account”.

Media figures from across print, broadcast and online organisations gathered at The MAC theatre in Belfast on Friday for the annual Coca-Cola CIPR NI Media Awards.

The Detail was named Digital News Platform of the Year, while journalists from the news and analysis website won a series of individual honours.

The judging panel, drawn from media circles across the UK and Ireland, said The Detail has: “Great emphasis on design, which complements the well-presented data and journalism. This consistently outstanding investigative/data journalistic site with its not-for-profit ethos and support from philanthropic organisations is a triumph for journalists determined to hold power to account, with great in-depth analysis and skilful use of every delivery platform.”

The Detail’s Editor Steven McCaffery was named Columnist of the Year for his regular political analysis articles.

His award winning work included reports on Stormont’s failure to introduce marriage equality, on the challenge that Sinn Féin’s growth in the Irish republic presents to the Northern Ireland media, plus a profile of former DUP leader Peter Robinson.

The judges said the analysis is "cool, informative, sheds light and explains. It is also readable and engaging on a subject that can so often be almost wilfully obscure. It is a vital aid to understanding the ever - or never - changing politics of Northern Ireland."

Earlier this year Steven was commended in the category of Online Editor of the Year at the major Online Media Awards in London.

Kathryn Torney, the website's Deputy Editor, was named Digital Journalist of the Year, with the judges praising her work as “outstanding”, “a superb example of detailed research” and “all on key public interest subjects”.

Her award winning entries drawn from her work in the Detail Data journalism project included a major report on the number of women travelling from the island of Ireland to Britain to access abortion.

Her winning submission also included coverage of domestic violence: Home is where the hurt is.

The Detail’s Senior Journalist Niall McCracken won silver in the category of Digital Journalist of the Year for work that included a major project that revealed inaccurate information about financial donations to Northern Ireland politicians was submitted to the Electoral Office. See that story here.

He was named as the online winner of the Specialist Journalist of the Year.

His work included an examination of inequalities in the lives of people living in each of Northern Ireland’s 11 local government areas. Read the story here.

Over 240 people from the worlds of media, public relations and business attended the awards’ 23rd anniversary event held by The Chartered Institute of Public Relations in Northern Ireland (CIPR NI).

The ceremony saw a lifetime achievement award dedicated to the late Liam Clarke, who reported on events in Northern Ireland for decades.

CIPR NI Chair Samantha Livingstone said: “Whilst the media landscape has evolved over the last 23 years, one thing has remained constant and that is the outstanding talent we have working within the Northern Ireland media – bringing us the news that matters 24/7.”

Sarah Smith, Public Relations Coordinator, from main sponsor Coca-Cola HBC Northern Ireland also congratulated the winners and commended all of the media professionals who work and report in Northern Ireland.

A full list of all the award winners can be viewed by clicking here.