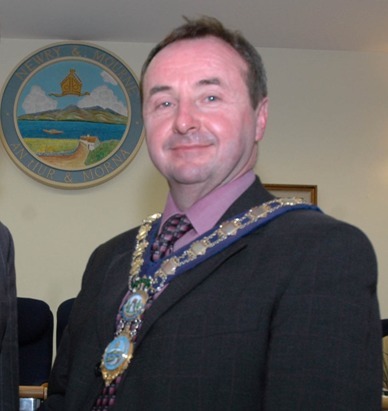 CUAN Mhuire is a charitable organisation providing drug, alcohol and gambling rehabilitation. Former resident Pat McGinn now works in its Newry Centre. Here he writes about his own experiences in dealing with alcohol problems which began in his teens.

You are talking to someone with a happy story. There is always happiness in recovery. I meet them every week.

When I arrived in Cuan Mhuire as a resident, I remember saying I was neither wanted by man nor beast. I was unemployable. My family were sick, sore and tired of it. Since I left I went back to college, university, qualified as a teacher, I have written a book, I’ve been the Mayor of Newry and run a marathon.

I started drinking when I was 15. I liked what it did for me. It made me feel better and yet the paradox is it was killing me. I was in my first institution when I was 18. I was in trouble from a very young age.

I came into Cuan Mhuire on my own terms. I didn’t have medical issues but my head was wrecked and my heart was broken. I was sick of being a failure. A lot of our residents can relate to this. But I can say there is recovery. My demons have been faced.

When I first came here I was carried in through the door to a detox – we can’t have one now because of the legal requirements and the cost, but I just went and shivered for about a fortnight before getting on a programme.

I now work with the younger residents coming in and most of them are telling us that they began to drink when they were 14 or 15. Lots of people are drinking at that age but others do so within parameters, they are working out their limits and they are not drinking until they are blacking out. A lot of younger people I am dealing with think blacking out and not remembering is a normal part of it. It shouldn’t be a normal part.

There is a different culture now. When Cuan Mhuire was formed 50 years ago it was for alcoholics, old men off the road.

Now we find that alcohol problems go through all classes and creeds and that people are getting introduced to stronger stuff at a young age. Within a short space of time they end up with high tolerance levels and so start mixing alcohol with substances and medication.

Among our residents, the largest age group is still 30-40. We have approximately 400 admissions a year and there is a steady growth of younger people.

People who arrive in our place are over the age of 18. This is our primary focus and normally they are in dire straits. They and their family are at the end of their tether.

More and more we are also becoming very involved in the preventative end of the work and this includes my work as an after-care officer. We do school visits and youth club visits all over the North and the border areas. We have a primary schools’ programme as well.

We take younger residents out, if they are strong enough, and let them tell their stories. What we are finding more and more is that it creates quite a reaction with young people.

We are trying to complement the work that other agencies are doing.

We are doing a programme now with Community Restorative Justice and the courts, where maybe a young person is in trouble because of drink, they come up to us for a day. We leave them be and they meet some of the residents and let them tell them how they ended up in our place. Let’s just say, no-one has come here because of ingrown toenails.

The estimated £900m annual cost to society of alcohol misuse is often quoted but we see each person here as an individual and the pain and hurt they have caused themselves.

We live in the real world. Addiction is not a clean business. What can come with it are serious social problems, dysfunctional relationships and domestic violence.

The first thing you are told here, and I know from personal experience, is that ‘I am responsible’. We don’t mollycoddle. There is nothing easy about this. When you are arriving in a place like ours you are in serious trouble.

Once you are in the deep end where addiction is concerned, too many people kill themselves trying to get back to the shallow end. It is heart breaking to see broken families and to see broken relationships.

It is a messy business and I fear we are sleepwalking into disaster. It is getting worse among young people, of that I have no doubt.

When you look at our suicide rates, the figures show alcohol plays a significant part and also drugs. Legal and illegal substances are freely available.

Currently at Cuan Mhuire we have approximately 80 residents. People can self refer, but people are also coming here through doctors and other agencies.

We all have to come together to focus on prevention.