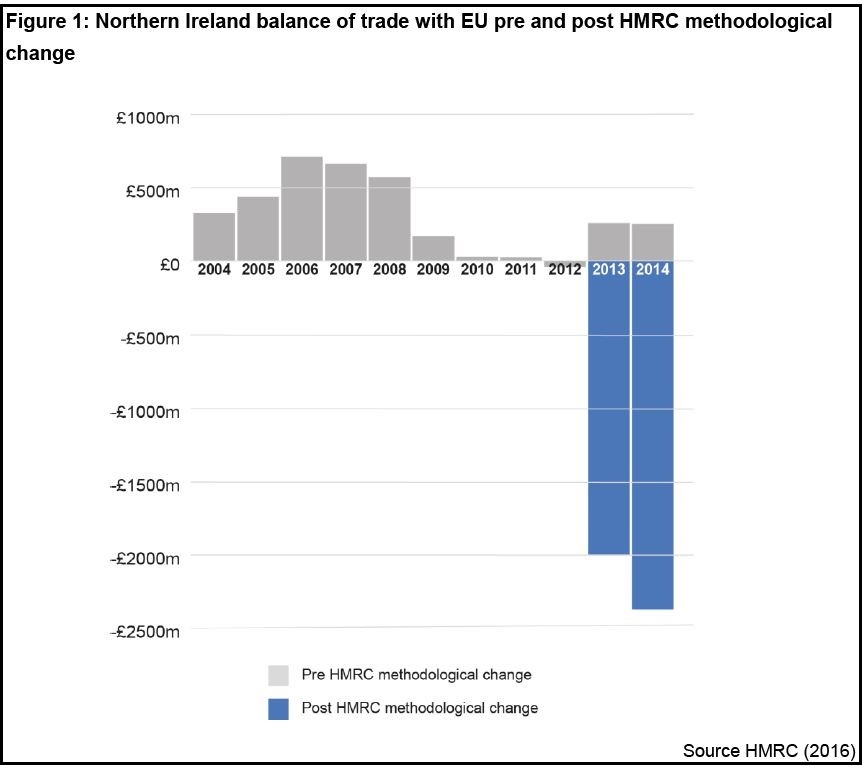 NORTHERN Ireland relies on imports from the European Union to a greater extent than previously understood, new government figures have revealed.

The fresh data has led civil servants at Stormont to revise a key finding of their research into the likely impact of leaving the European Union (EU).

Previous research published by Stormont in January 2016 used data from Her Majesty’s Revenue and Customs (HMRC) to conclude that Northern Ireland exported more to the EU than it imported.

But now revised figures have dramatically overturned the finding, revealing instead that Northern Ireland imports much more from the EU than it exports.

However, the revised research (in blue) shows that Northern Ireland actually imported much more from Europe than it exported, representing a trade deficit of more than £2billion.

The HMRC trade statistics previously related to where companies based their headquarters, but the new figures focus instead on where firms have the bulk of their workforce.

The swing in the trade balance comes as Brexit negotiations between the UK government and the European Union got underway this week.

Neil Gibson is the Director of Ulster University’s Economic Policy Centre. Commenting on the revision of the trade figures, he said: “Trade statistics are complex and prior to the decision to leave the EU they rarely received much attention.

“The recent revisions to the methodology for estimating trade across UK regions has significantly altered the conclusion as to Northern Ireland’s net trade position with the EU.”

He warned against drawing firm conclusions and said companies may carry out different activities in different regions.

He added: “It is however a better approach than the previous one of looking only at headquarter locations so should be closer to the actual figure.”

The Stormont analysis, prepared by the Northern Ireland Assembly Research and Information Service, said that a significant proportion of the increase in imports into Northern Ireland relates to machinery and transport goods.

Stephen Kelly from Manufacturing NI said: “These balance of trade figures show how dependent we are on imports from the EU for supplying everyday items and the materials we need to service our businesses.”

He added: “We’re a small regional economy, with limited natural resources and a small domestic marketplace. There are well articulated concerns about being able to easily and competitively export post-Brexit, but businesses and domestic consumers could face financial pressure caused by delays and a sharp increase in costs for imports too.

“We don’t have the scale to be able to build cars, home appliances, depend on importing fuel for vehicles, heating homes, steel and other raw materials which allow our firms to create products for markets at home and abroad.”

Mr Kelly said the revised trade figures underlined the need to protect business: “The Single Market, the all-island economy and the GB marketplace all benefit Northern Ireland’s manufacturing and indeed service firms. Continuing a free-flowing trade without delay, admin or tariff costs in these markets is critical if we want to protect businesses and consumers.”

The revised Northern Ireland Assembly Research and Information Service briefing paper on the implications of Brexit published last month states: “From a practical perspective, this change substantially alters the analysis of Northern Ireland’s trading relationship with the EU. Under the old methodology, the data shows that trade between Northern Ireland and the EU resulted in £243 million (m) net entering the Northern Ireland economy in 2013. “

HMRC explained the need to alter its analysis process in an explanatory document which said: “A new allocation method was needed that allocated trade to the regions more closely aligned with where the importing and exporting was taking place rather than merely basing it on the where the head office was located.”

The new methodology was adapted by HMRC at the end of last year and has been applied in the new Stormont research paper for the years 2013 and 2014.

“Trade data in a region such as Northern Ireland is dominated by a relatively small number of large firms, particularly manufacturers, meaning the data can be relatively volatile which further adds to the complexity in drawing firm conclusions. The recent closures of JTI and Michelin for example will have a material impact on trade figures.

“As with all new trade deals, whether it is with the EU post Brexit or with the new markets around the world that the UK government prioritises trade deals with, there will be winners and losers in the new arrangements. Firms will look to sell elsewhere, buy from elsewhere and possibly locate in new places to take advantage of the new ‘rules of the game’. Expect the trade data to become increasingly volatile.”

The Detail previously reported on how Stormont officials highlighted the potential risks of Brexit a year before the EU referendum.