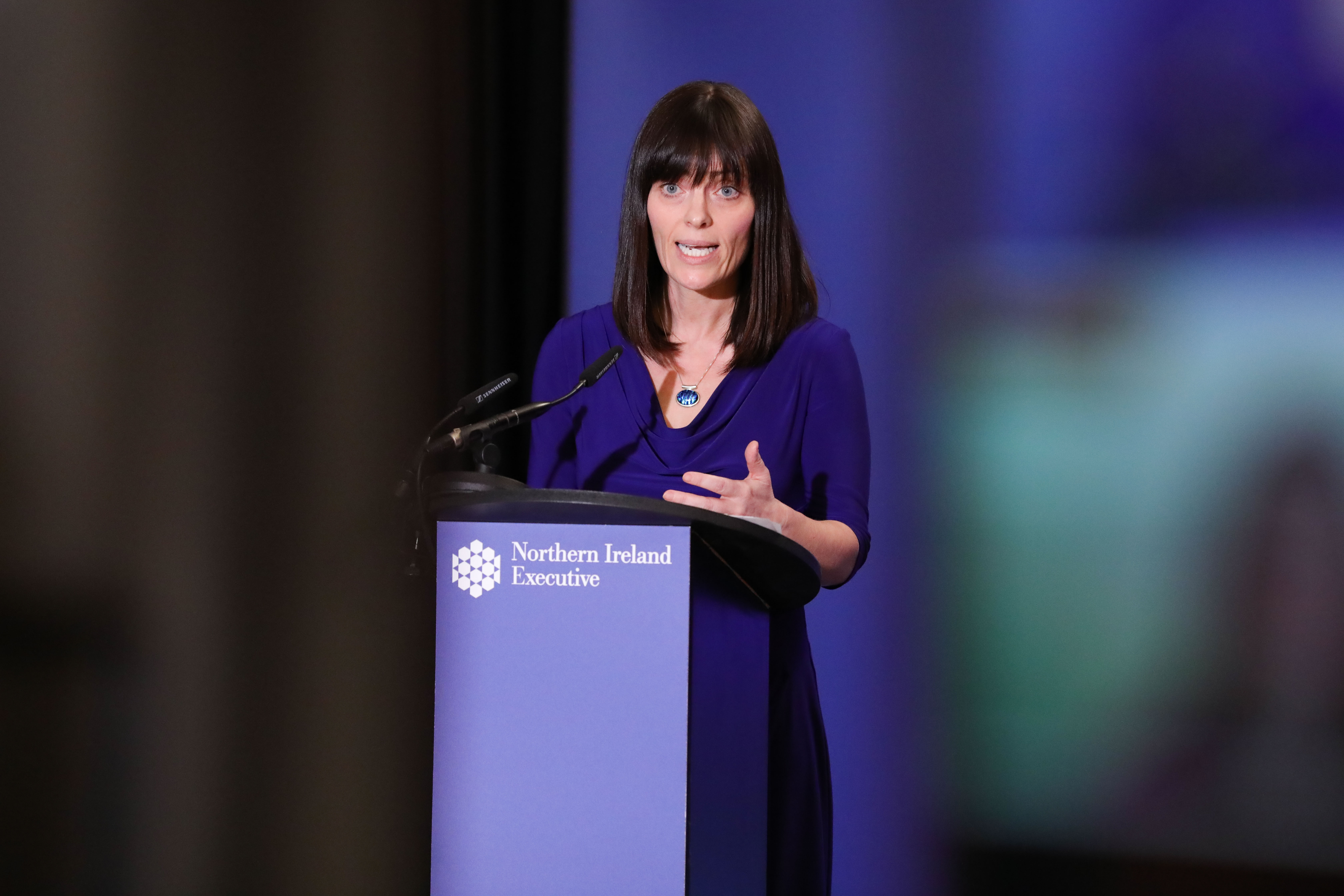 THE Department for Infrastructure (DfI) has confirmed to The Detail that the public inquiry into plans for a controversial gold mine will not be led by a judge, as had been hoped by campaigners, but by the Planning Appeals Commission (PAC).

Canadian company, Dalradian, has submitted their planning proposals, believing there is £3bn worth of gold in the area surrounding the County Tyrone village of Greencastle.

Campaigners opposed to the proposals say the DfI’s decision not to appoint a judge to oversee the inquiry could mean critical health and environmental issues will not be considered.

DfI Minister Nichola Mallon made her initial announcement, last week, that a public inquiry of some sort would look into Dalradian's planning application for the proposed gold mine and processing plant.

The Detail was told that while Minister Mallon has, so far, made no formal requests to the PAC, this will be done once the department's “satisfied that the PAC has all necessary information to ensure that representations can be fully considered and robustly scrutinised at the inquiry".

Fidelma O’Kane, the secretary of Save Our Sperrins, a group campaigning against the mine, told The Detail: “It’s a big blow if it's a PAC-led inquiry. It won’t have the same weight, and equality of access for local people, as one which is judge-led. We want access to independent experts on many aspects of the application.”

Local independent councillor, Emmet McAleer, said: “It takes away the human rights angle, which would cover health and environmental concerns, and makes it purely about the planning process.

“This is of great concern to the local people who are worried about the implications that this mine and processing plant could have on future generations living in the area.”

“There’s a proposal for a waste dump of over 50 metres in height, that’s before getting into the potential impact on the waterways” Councillor McAleer said.

Last year, following public pressure, Dalradian removed the use of cyanide from their proposals.

Councillor McAleer, elected to Fermanagh and Omagh District Council on the back of campaigning against the mine, said: “You don’t have to be a scientist to have concerns about cyanide, but local people have been put in a position where they’ve had to become knowledgeable about all sorts of issues relating to Dalradian’s plans.”

Almost 37,000 objections to Dalradian’s proposals have been submitted on the online Northern Ireland Planning Portal while fewer than 4,000 submissions have been made in support of the company’s plans.

The Detail approached both the PAC and the DfI to seek clarity on the terms of reference for the inquiry.

A spokesperson for the PAC told The Detail: “Normally only one commissioner conducts a public inquiry, however, this may vary depending upon the scale and complexity of the inquiry.

“Once the inquiry has been passed from the department (DfI), all responsibility for the remit and the running of the inquiry rests solely with the commission."

A DfI spokesperson told The Detail: "The minister will not determine the scope and remit of the inquiry, as she has made clear that it will be independent of the department. The programming of the inquiry will be a matter for the PAC once they have been asked to hold the inquiry."

Once called by the minister, the PAC spokesperson confirmed that the commission sets the agenda, timetable, procedures and instructions for inquiries.

Recently published research conducted by Queen’s University Belfast found that 70% of participants said the planning system does not serve the public interest, with many feeling their views are rarely taken into account when planning decisions are being taken.

The study also found that people believe that the PAC is the body which holds the most power over planning in Northern Ireland, but the DfI spokesperson said: "The minister is also satisfied that all stakeholders will have the opportunity to participate and make submissions."

Councillor McAleer said: “A judge-led inquiry gives the local people a greater chance of fairness and transparency than one led by the PAC.”

Ms O’Kane referenced a public inquiry held before the PAC last year, which related to a proposal by SSE Renewables Developments for a major wind farm in Doraville, County Tyrone, close to the proposed Dalradian site.

“SSE had so many experts over from England” Ms O’Kane said.

“They flew in and simply danced to the tune of SSE. They dictated to the local people, who were trying to put up a defence for their land, heritage and archaeology, and were concerned about the damage that would be done to the mountains and bogs.”

An SSE spokesperson told The Detail “a number of expert consultants were in attendance, as is normal practice at all such inquiries”.

The spokesperson added that the Doraville wind farm represents an investment of £150m in the local economy and that all of the electricity generated by its wind farms powers its sister company, SSE Airtricity, “the largest provider of wind generated power in Northern Ireland”.

The PAC Doraville report was sent to the DfI in February 2020, but its findings haven't yet been publicly released. The PAC spokesperson said it's up to Minister Mallon to make "the final decision" on recommendations within reports it sends to the DfI.

However, the DfI could not inform us when a decision regarding the wind farm will be made or when the PAC report will be released.

Ms O'Kane questioned why this hasn't happened yet and said it raises concerns for the proposed Dalradian inquiry.

Ms O'Kane said a judicial review, challenging the decision to hold a PAC rather than judge-led public inquiry into the Dalradian application, may be taken.

A previous judicial review was taken by Ms O'Kane in December 2017 because of concerns over water discharge consent that the Northern Ireland Environment Agency (NIEA) had granted to Dalradian.

The process ran until November 2019 when the NIEA conceded that a proper Habitats Regulation Assessment hadn’t been carried out. The water discharge consent was then quashed.

Ms O’Kane said: “That took 23 months. These processes are slow and they cost lots of money.”

A spokesperson for the Department of Agriculture, Environment and Rural Affairs (DAERA), which has responsibility for the NIEA, told The Detail a decision to no longer contest the judicial review was taken because the process of granting consent to Dalradian "did not meet the procedural requirements set down in the regulations”.

We were also told that DAERA has now reviewed its procedures for handling the review of discharge consents "to ensure full implementation of the requirements of the Habitats Regulations".

Dalradian applied to discharge cadmium, mercury, arsenic, chromium, copper, iron, lead, nickel and zinc in effluent which would flow into the Curraghinalt Burn, a tributary of the Owenkillew River which is a Special Area of Conservation.

Each of these nine substances were classified as 'dangerous' on Dalradian's discharge consent application.

However, the company maintains it's wrong to suggest it will be putting these substances into local watercourses, adding that they are "naturally occurring" in the area in question.

The DAERA spokesperson said: “NIEA’s consenting process does not permit the discharge of high levels of any substance that may damage the water environment.

“Stringent standards are set on consents to discharge for zinc, mercury, cadmium, copper, iron and other parameters, where required.

“These are set at levels which are protective of the environment and to ensure the relevant environmental quality standards in the receiving waterbody can be met.”

A spokesperson for Dalradian told The Detail water discharge consents are in fact “protective of the water environment” and that its consent was only set aside because of a “technical legal issue” which is “now being redetermined by NIEA”.

Dalradian believes that should its proposals go ahead, it will create a £175m construction project “which will create 300 jobs over a two-year period”, as well as further operational jobs which it claims may last for 25 years.

However, Councillor McAleer stressed that “short-termism” shouldn’t be promoted in favour of “long-term, long-standing, sustainable economic agricultural and tourism interests which are currently so important to the area”.

The Dalradian spokesperson added that the company is “proposing an environmentally responsible project” and that health considerations have also been taken into account.

They continued: “To date, we have engaged in almost 100 meetings with 16 regulatory authorities to bring forward a project that works in tandem with the local environment, with particular regard to issues such as water, air quality and visual impact.

“The public inquiry is an important part of the planning process and represents a further opportunity to independently scrutinise all aspects of the planning application.

“We welcome the opportunity to demonstrate the level of design and preparation which has gone into the project over the past decade.”