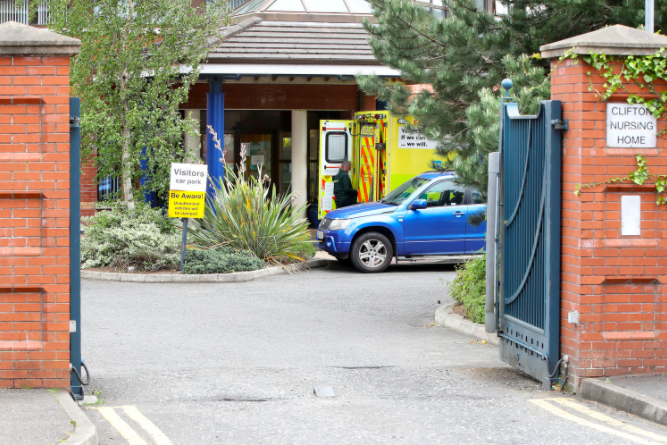 Residents being relocated from Clifton Nursing Home after a Covid-19 outbreak. Photo taken in May 2020 by Declan Roughan, Press Eye.

THE terms of reference for a controversial report, which examined the Department of Health’s (DoH’s) handling of Covid-19 and care homes, were only set 10 days prior to the report being published.

Commissioned by the DoH, the report found no correlation between hospital discharges of patients into care homes and Covid-19 outbreaks in care homes in Northern Ireland.

The report was produced by Dr Niall Herity, a Belfast-based consultant cardiologist.

Dr Herity sought to establish “if there was any correlation between hospital discharges (especially discharges in the absence of testing in early stage of pandemic) and subsequent care home outbreaks”, but he did not find any.

His research, published on November 12, 2020, doesn’t “support a hypothesis” that discharges from hospitals into care homes were a “substantial cause” of Covid-19 outbreaks in care homes in Northern Ireland.

However, The Detail can reveal that the terms of reference for Dr Herity’s report were only set 10 days earlier, on November 2. We uncovered this by using Freedom of Information (FoI) legislation.

Public health expert, Dr Gabriel Scally, told The Detail: “To only develop and finalise those terms of reference towards the very end of that investigation is extremely unusual.

“Likewise, it really is extremely unusual not to have terms of reference set from the beginning of such an investigation.”

The documentation we have uncovered through FoI also shows the Permanent Secretary of the DoH, Richard Pengelly, stating “we are very keen to get the work completed ASAP”.

The Detail has also found that conversations about this review, between the chief executive of the Belfast Trust, Cathy Jack, and Mr Pengelly were initiated during the week beginning September 14, 2020. The review started the following week.

Dr Scally said: “I can’t see why this would need to be so rushed as it was a retrospective review of what had happened, but it was clearly a review that was carried out in a hurry.”

Dr Connor Bamford is an expert in virology and antiviral immunity at Queen's University Belfast (QUB). He previously told The Detail that Dr Herity’s report appears to be a “superficial analysis and needs to be followed up”.

Dr Bamford also said that after “looking at what analysis was done” he was not surprised it took a “short time” to complete.

In addition, Dr Herity’s report sought to consider the “relationship (or otherwise) between departmental guidance” and the “clinical decision-making process in relation to discharges”.

Permanent Secretary for the DoH, Richard Pengelly, sent correspondence – referenced in Dr Herity’s report – to each health trust chief executive on March 26, 2020 which highlights the importance of hospitals implementing “effective discharge arrangements for patients as soon as they are well enough to leave hospital in order to release beds for newly-admitted patients”.

Mr Pengelly added that families would have to “accept that patients may be discharged to a nursing home that would not be their first choice”.

Another QUB virology expert, Dr Lindsay Broadbent, referenced how “the sharpest decline in median length of hospital stay” was immediately after Mr Pengelly directed this.

She added: “It is unknown what the median length of hospital stay would have been without the impact of the letter.”

In addition, further correspondence sent by Mr Pengelly in late April 2020, states that while patients should have been tested – “ideally” 48 hours prior to their discharge back into a care home – the results of these tests were not relevant to whether discharges should or shouldn’t take place.

The correspondence says: “This testing requirement must not hold up a timely discharge.”

While the report was produced “at the request” of Health Minister Robin Swann, Mr Pengelly was to be provided with updates on the progress of Dr Herity’s work “as and when requested”.

Given the contents of both his March and April pieces of correspondence, we asked the DoH if there was any conflict of interest in Mr Pengelly being informed of Dr Herity’s progress in this way, but the department did not respond to this.

However, Dr Scally said: “It is unusual to commission and carry out an investigation in this way as there should always be a separation between the person carrying out the investigation and those whose actions could possibly be called into question by the investigation.”

QUB’s Dr Bamford previously told us that to establish what Dr Herity’s report set out to do, would require “a lot of effort on the part of numerous individuals with different expertise, such as clinicians, infectious disease experts, public health doctors, epidemiologists and people who run care homes”.

However, he added: “I am concerned that there appears to be a lack of expertise required to look at this properly, so I do not think the analysis is as good as it could be.”

Meanwhile, Dr Scally said: “The lack of direct input from clinicians in the relevant clinical specialities is concerning.”

The public health doctor also said that the issue of care homes and the discharge of Covid-19 positive patients into those homes “is of such importance and gravity”.

Dr Scally added: “It, therefore, requires more than a rapid investigation without clear specification from the beginning, without involvement of specialist knowledge of some of the areas being looked at and with close involvement from the beginning of some people whose actions could potentially be called into question.

“Given this, my view is that the report should not be taken in any way as a definitive resolution of the very serious issues that have been raised.”

In the last 12 months in Northern Ireland, more than 1,000 care home residents’ deaths have involved Covid-19, leading to calls for a public inquiry.

Mr Cummings said: "We were told categorically in March (2020) that people would be tested before they went back to care homes. We only subsequently found out that that hadn't happened.