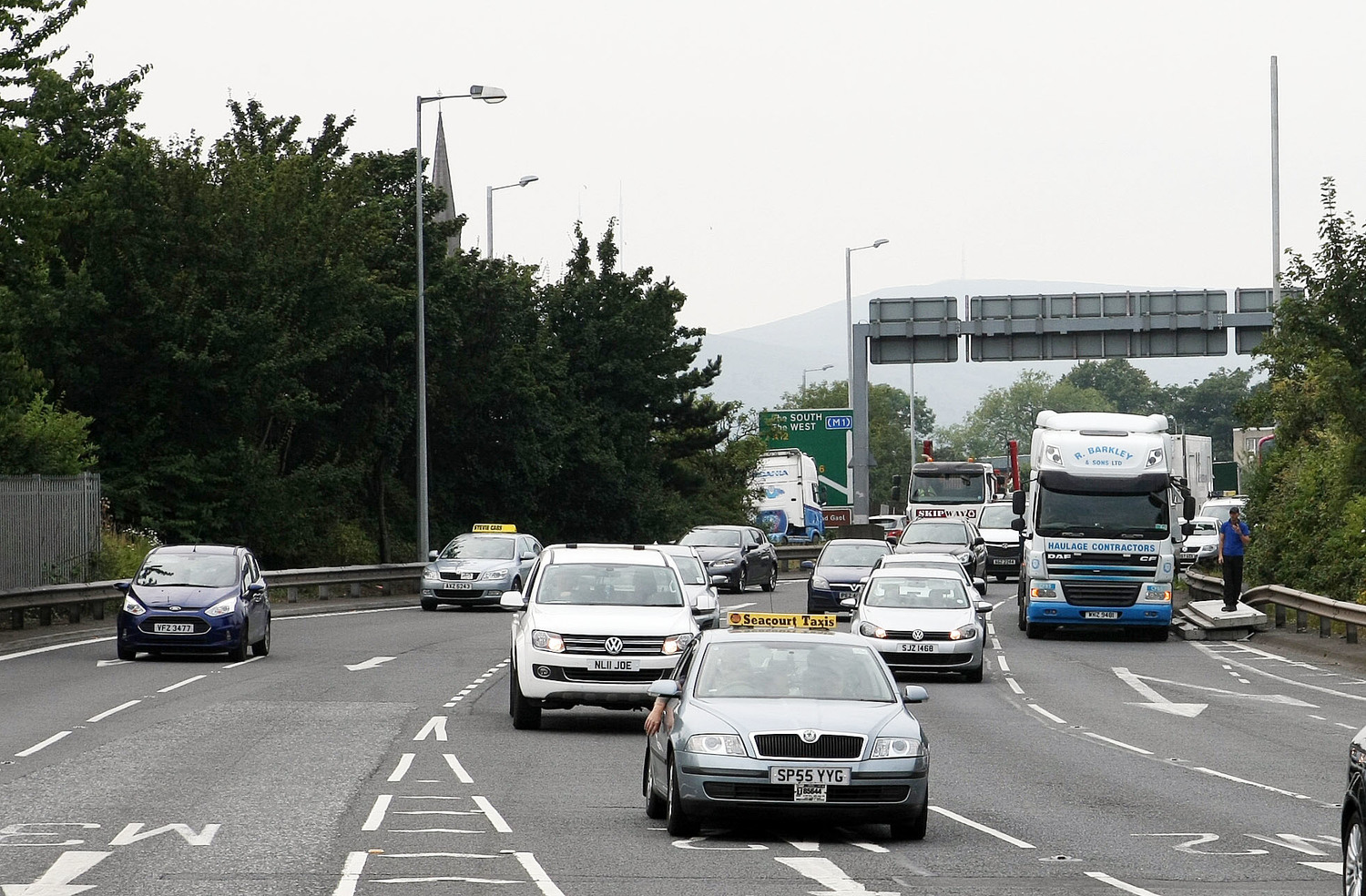 The Good Friday Agreement was signed 24 years ago this week, relationships north-south and east-west are evolving and changing. In this context, what are the issues that are relevant and to be considered as we think of our future? The Detail is publishing a series of articles which will explore daily cross-border activity on the island of Ireland. The former editor of the Impartial Reporter newspaper, Denzil McDaniel, introduced the series while below, in the sixth of our stories, Luke Butterly looks at cross-border trade and the movement of workers across the border.

There has been a significant increase in trade on the island of Ireland since Great Britain left the European Single Market last year.

Views differ on whether this change is best seen as a a “problem” or an “advantage” for Northern Ireland, in the respective words of a former Brexit minister and a nationalist politician.

But what is clear is that cross-border trade has long been on the increase in the 24 years since the Good Friday Agreement.

Figures released by InterTradeIreland to The Detail showed that cross-border trade had reached an all-time high of £7.1bn in 2019 – from just over £4.5bn in 2011. The continued rise highlights the interconnected nature of trade between the two economies, despite uncertainty around Brexit, and that there has been an upward trend for both cross-border trade and services for most of the past decade.

One of six all-island bodies created under the Good Friday Agreement, InterTradeIreland has helped small businesses in the Republic of Ireland and Northern Ireland explore new cross-border markets over the last 20 years. To date, they claim to have assisted over 42,000 businesses, and created or protected close to 16,000 new jobs.

Data provided to The Detail shows that a very signiﬁcant share of cross-border trade is accounted for by ﬁrms that trade simultaneously in both directions. Between 2020 and 2021, 22% of all Northern Irish small businesses surveyed exported south while 16% of similar businesses in the Republic exported north.

The economy in areas of the country is particularly integrated, such as Donegal-Derry, and receives support from both governments through the North West Strategic Growth Partnership. In some Donegal towns, such as Kilderry or Killlea, it is estimated almost 50% of the workforce is employed in the other jurisdiction.

Seeking to emulate this success, a Dublin-Belfast Economic Corridor initiative was launched in March 2021, supported by eight local authorities from either side of the border.

Workers who cross the border and those elsewhere on the island are increasingly part of the integrated cross-border and all-island economy.

A consequence of the 1998 Good Friday Agreement was the greater ease of movement across the border, resulting in a significant number of people working in Northern Ireland and living in the Republic of Ireland, and vice versa.

There are now an estimated 30,000 people who cross the border to work each day.

Annmarie O’Kane, from the Centre for Cross-Border Studies which compiled that figure, said that the new environment following the Good Friday Agreement meant workers were more confident in their ‘cross-border lives’. She told The Detail: “Since the Good Friday Agreement the whole environment of peace, having a peaceful place, is obviously going to be beneficial, to employers who are going to be setting up and to workers who are going to be crossing the border.”

“These things don't happen overnight – that took time to kind of bed down.”

“Beforehand there might have been quite a lot of people – particularly in the border region – having cross-border lives, a foot on each side, but maybe keeping their head down and not saying very much about that, and just getting on with it. 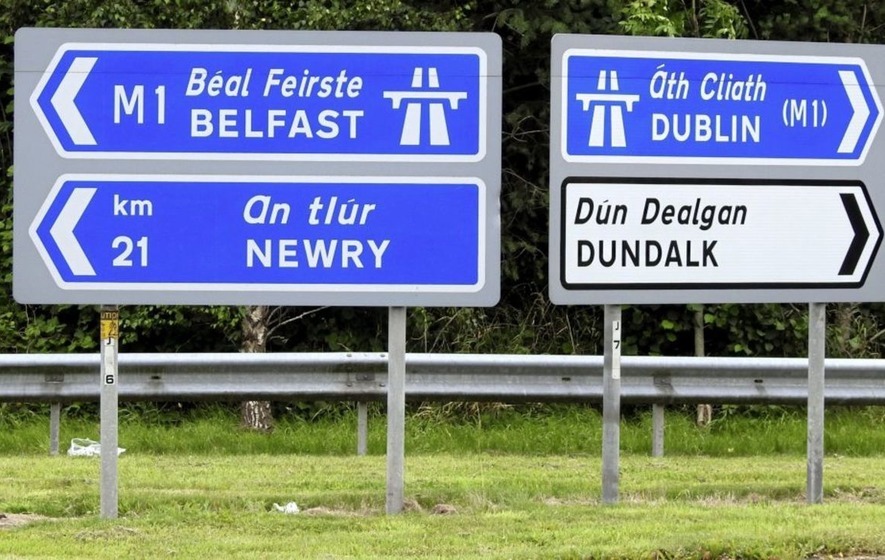 “There is a steady flow going across the border, a lot of people moving from Donegal into Derry and Strabane for work, a lot of people come from Newry to Dundalk, Drogheda and even into the heart of Dublin for their employment.”

Most workers commute to and from counties on either side of the border, and just three counties account for 60% of all cross-border movement. However, many workers travel further. The North’s Department for Economy has stated in 2018 that “cross-border commuters are important to not just the border towns and cities in Northern Ireland”, but also to Belfast and Dublin.

Ms O’Kane said the important thing for workers was that the openness following the peace agreement was underpinned by joint EU membership.

“It is all about confidence, and people were getting very confident about those rights and entitlements that they had to do that, to travel across the border for work.

“Workers knew that they had to be treated equally across the border. They knew that their social insurance contributions weren’t lost to them.”

The system was not “all perfect, could be a nightmare for some people”, she said. “The interpretation of those rules north and south were sometimes different, and people could fall between the cracks.”

With the UK’s exit from the EU, the rules protecting workers' rights in the two jurisdictions will start to divide.

“Things haven’t changed, but they have the potential to change. The rug has been pulled from underneath us a little bit, and we are not as confident as we were.”

While labour mobility has been a benefit to that porous border and the all-island dimension, protecting workers' rights can be particularly difficult in the border region.

How workers' rights have changed since 1998 is ‘not an easy question’, Patricia McKeown, Unison Northern Ireland regional secretary, told The Detail.

Many workers across the island, have seen a roll back of their rights, particularly those in the private sector.

“It has been difficult over the years to get real work going on cross-border comparisons and collective agreements that span the jurisdictions.

“Over the past two, or maybe three, decades, we have developed a lot of all-island, whole union policies, that we want to pursue and consolidate. 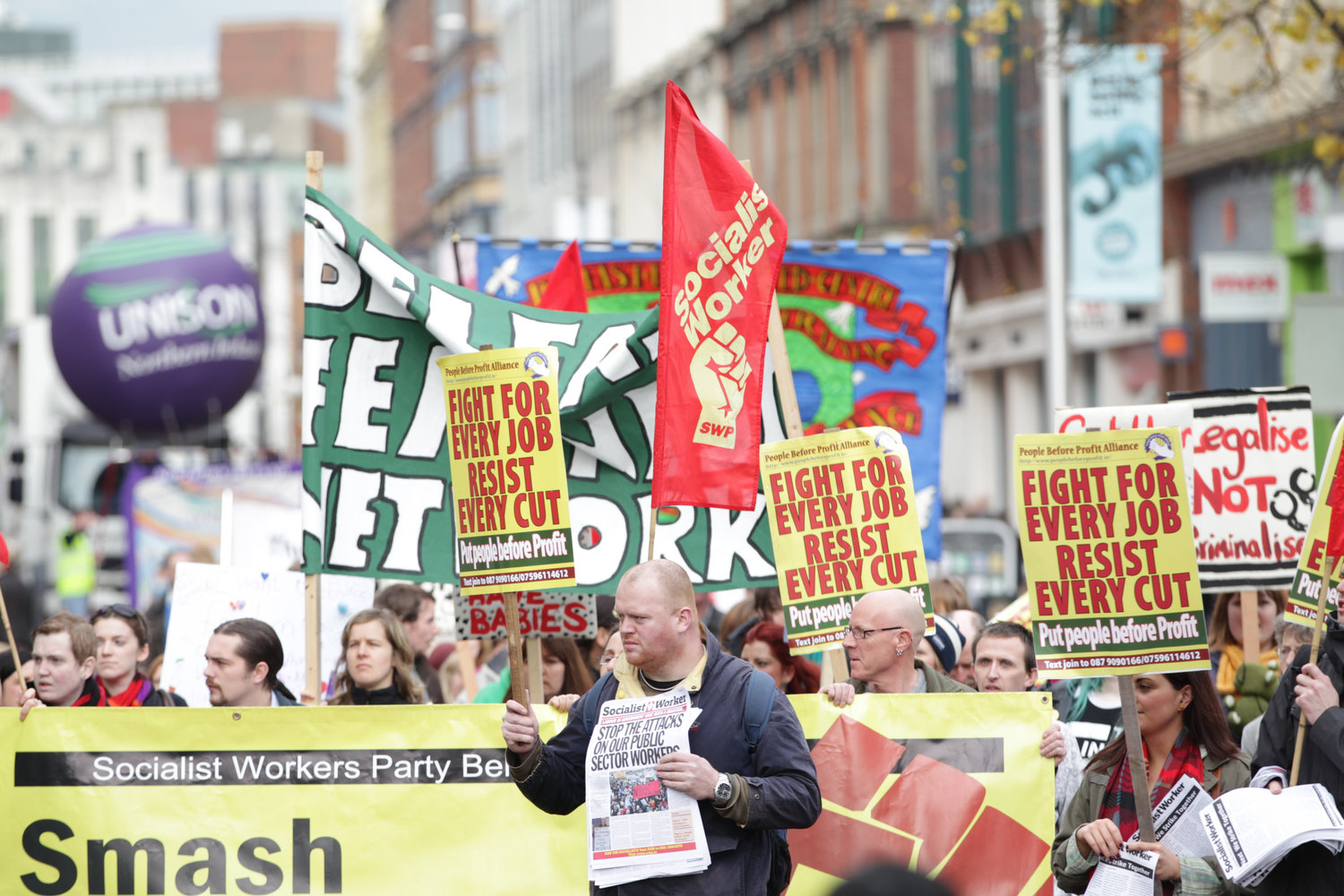 An anti-austerity demonstration organised by the NI Committee of ICTU. Photo by Darren Kidd, Press Eye.

At the time of the Good Friday Agreement a Bill of Rights, covering Northern Ireland, and a Charter of Rights, covering the island of Ireland, were mooted but never realised. Trade unionists had hoped that an all-island charter, had it eventually been established, might have moved the two jurisdictions towards harmonisation of workers' rights.

Instead, joint European membership ensured that for the past twenty years there was “a floor of rights”.

“We didn't have politicians or bureaucrats in Brussels suddenly decide that workers across Europe should have rights”, she said. Rights which are promised in international or domestic law, “really only get there through struggle. That has been the history for a very long time, not just the past 20 years.”

Trade unions in the North saw an increase in membership from workers living in the South in the years following the Good Friday Agreement.

“Certainly, we’ve seen a significant increase in membership of our union from workers who live on one side of the border and work on this side. That's a significant increase over that period of time. So others (unions) must have experienced the same thing. Before the peace agreement, there would have been a chill factor.”

Ireland is unique in Europe in that there is only one trade union centre covering two jurisdictions, Ms McKeown, a former Irish Congress of Trade Unions (ICTU) president, said.

The ICTU is the largest civil society organisation on the island, representing around 770,000 working people north and south of the border.

“If you look at any other European country, you’ll find two or three congresses, usually competing with each other from political perspectives,” said the head of the public sector union.

“But we are unique in that we have one organisation for unions covering the whole island.”

That the Irish trade union movement maintained its all-island basis throughout the decades “is a remarkable feat”, says Dr Seán Byers, a researcher at trade union-based organisation Trademark Belfast.

“There were obviously moments during the Troubles when that unity and structure was threatened”, Byers said of the ICTU, which was formed in the late 1950s.

Maintaining unity meant sometimes having to shy away from certain issues and keeping their focus on bread and butter issues, and peace.

In the 1990s, the ICTU was important in organising efforts to persuade armed groups to put down their weapons, and organising massive rallies for peace.

“The two movements that managed to sustain those cross-community, all-island relationships throughout the Troubles were the Women's Movement and the trade union movement,” he said.

“So they (ICTU) came up with their own Good Friday Agreement, which managed some of those questions.”