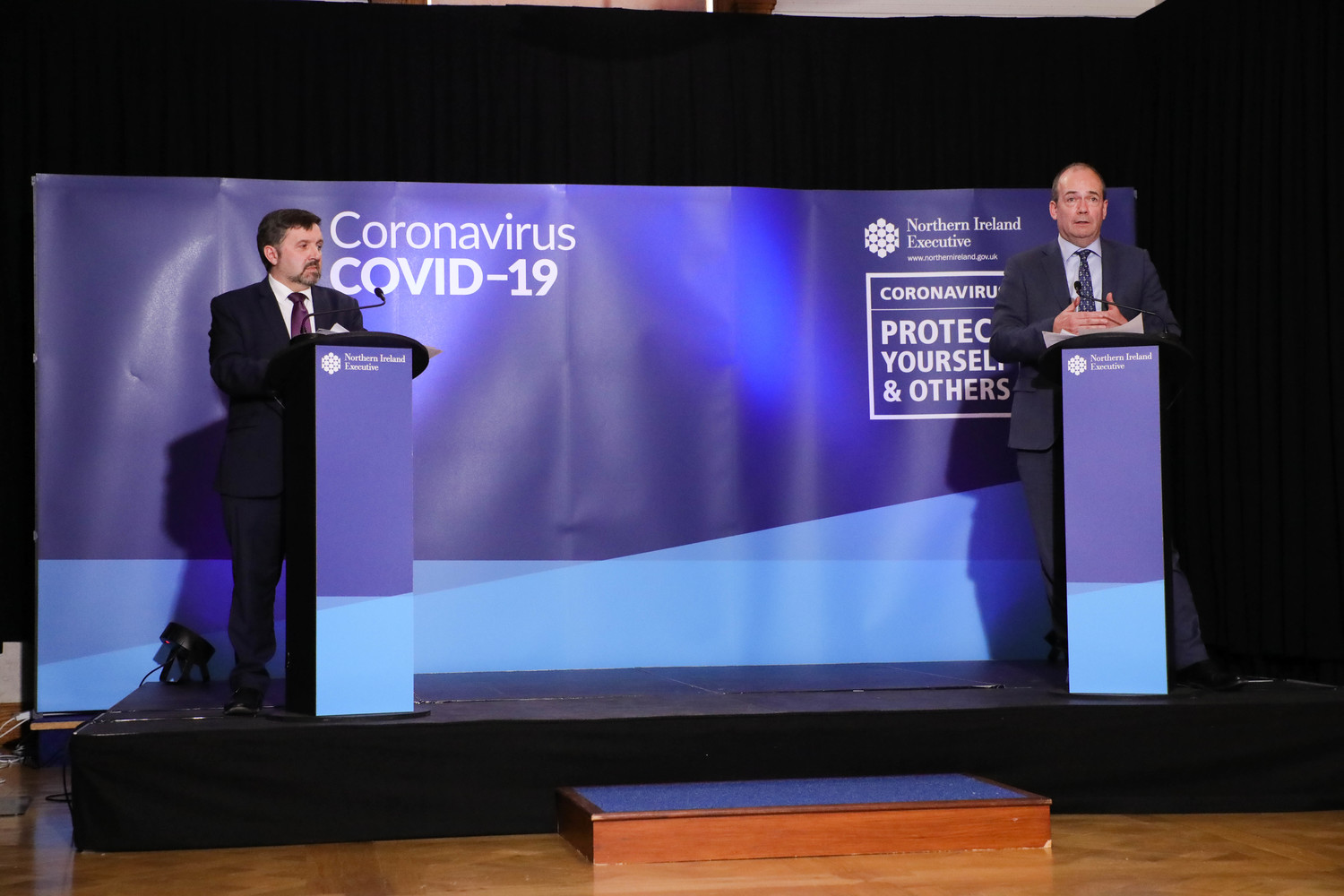 THE Department of Health (DoH) has denied providing misleading information to The Detail about legal correspondence sent to a journalist on behalf of Northern Ireland’s Chief Medical Officer (CMO).

Jilly Beattie, a reporter with the Daily Mirror and Belfast Live, received correspondence from the Departmental Solicitor’s Office (DSO) after she published Tweets relating to the CMO Dr Michael McBride.

This correspondence, seen by The Detail, states that the Tweets were defamatory. It also says the CMO has “repeatedly made himself available to the media on many occasions”.

Despite this, a DoH spokesperson told us that legal representatives did not send correspondence to the media about the number of the CMO’s press appearances.

The Detail then informed the DoH that we had evidence to the contrary and sought an explanation about why the department issued apparently misleading information on this matter, but the department still denied that such correspondence was sent.

A DoH spokesperson responded: “The department did not send legal correspondence in relation to public/media appearances.”

The Detail also asked how many times the DSO sent correspondence to members of the media, on the behalf of DoH officials, from the beginning of March. We were not told this.

However, the DoH spokesperson did confirm that the DSO had issued one such correspondence since the beginning of May, which was “in relation to abusive and potentially defamatory comments”.

We asked the DoH if the Health Minister Robin Swann or Richard Pengelly, the Health Permanent Secretary, approved decisions to engage the DSO to represent department officials on defamation issues. The DoH refused to answer this question.

The Detail also contacted the Department of Finance (DoF) which has responsibility for the DSO.

A DoF spokesperson told us: “DSO acts only on the instructions of departments. If a department is of the view that inaccurate or defamatory statements have been made against its officials in relation to the exercise of their duties, and wishes to make representations in respect of them, the DSO will act on the relevant department’s instructions.”

Dr McBride previously came under scrutiny over correspondence he sent to Queen’s University Belfast in April 2020 which expressed concern at the commentary of one of the university’s academics. This commentary related to personal protective equipment (PPE) and Covid-19.

The DoH maintained that the CMO's correspondence “in no way” sought to stifle academic opinion.

The latest Northern Ireland Statistics and Research Agency (NISRA) figures show that care home residents account for over half of the Covid-19 deaths in Northern Ireland.

On April 16th, The Detail reported that the outbreak of Covid-19 led the DoH to cease routine inspections of all care homes in Northern Ireland.

A subsequent judicial review was taken, challenging this decision. On the morning before this was to go to court, on June 23rd, the DoH reversed its decision to limit care home inspections and covered the applicant, Keith Gray’s, legal costs.

The previous day the entire board of the RQIA, the body responsible for inspecting care homes, resigned in protest at decisions made by the DoH in response to Covid-19.

In May, Jilly Beattie published an article in the Daily Mirror stating that it was the CMO who gave the instruction to reduce care home inspections.

In response to the DSO’s correspondence regarding Ms Beattie’s Tweets, the Daily Mirror’s legal team wrote: “The Tweets identified do not exist in isolation and it is not open to departmental lawyers or Dr McBride to take the Tweets out of context.

"On May 20th an article was published in the Daily Mirror concerning the issuing by Dr McBride of a departmental direction reducing inspections at care homes.”

It continues: “The fact that Dr McBride appeared once on Downtown Radio on May 27th and that that interview is available on Downtown Radio’s Facebook page does not negate the basic premise grounding Ms Beattie’s opinion.”

The correspondence also says that the Covid-19 pandemic is of “acute public interest” and, as such, so are the actions of the CMO, the DoH and the Health Minister.

The Daily Mirror lawyers wrote: “Although there is no universally agreed role for a CMO, it is Ms Beattie’s opinion and, we believe, a reasonable opinion to hold, that the role should encompass advising the public at large about matters affecting public health, maintaining direct communication with the public to keep the public informed of developments and to explain government responses to this public health emergency.

“The reporter is entitled to voice her opinion and to raise questions and to comment on matters of public interest, and to invite the public to reflect on these matters; this includes the frequency and manner of the CMO’s public statements.”

The Detail also asked for the DoH to provide us with evidence of each press statement and public appearance Dr McBride had made since May 1st.

In addition, we asked why there seemed to be a difference in the number of times the Northern Ireland CMO had been appearing in the press compared with his counterparts in Great Britain and the Republic of Ireland. These questions were originally submitted on June 19th.

The DoH informed us that these questions, along with our query regarding the legal correspondence sent to Ms Beattie, would be treated as a single Freedom of Information (FoI) request.

We then requested that only the question regarding each press statement and public appearance be dealt with under FoI legislation, which the department then accepted.

However, we asked for an explanation why this question couldn’t be treated as a straight forward press query.

After a number of email exchanges, the department spokesperson replied: “Given the workload pressures on our press office, we simply do not have the capacity to trawl back through all media interviews within the normally expected timescale for a media response.

“In such circumstances, it makes sense to treat such a request as an FoI – it provides a structure for you and us, and an expected timescale. If you do not wish this to be treated as a FoI request, that is your choice, but we are trying to be helpful by suggesting this approach.”

The Detail lodged three separate FoI requests with the DoH, over four months ago, which have yet to receive responses.

However, on July 22nd, the DoH told us that Dr McBride had carried out a “minimum” of 11 interviews between May 1st and June 19th.

We were also informed that the department issued 647 statements/press releases during this period and that the CMO “would have led on or contributed to a significant number of these”.

The DoH originally said that it could not comment on why there appeared to be a difference in approach regarding the CMO's public appearances in Northern Ireland, when compared with his counterparts in Great Britain and the Republic, because it was "not aware” of approaches adopted in those jurisdictions.

The Detail, however, replied that we believed it was reasonable for the DoH to be aware of the media appearances of the CMOs in our neighbouring jurisdictions and how they compare with Northern Ireland during this period.

The DoH then responded: “Different jurisdictions will always take different approaches to issues, reflecting the prevailing context and circumstances. It is surprising that The Detail seems to think this is odd.

“In Northern Ireland, ministers have chosen to take the lead e.g. through the daily press briefings. The CMO has regularly accompanied the minister at these press conferences.

“On other occasions, other senior officials from the department and trusts took part.

“Any fair and balanced media coverage of the CMO’s media appearances should also reflect a) that doing media is not his principle responsibility b) that he and his team are dealing with a range of onerous responsibilities bringing with them severe workload pressures.”

We replied: “The department has now, after initially choosing to say nothing on the matter, actually said that a decision has been made for ministers to lead things in the press...Can the DoH explain the rationale behind this?”

The DoH is declining to answer this question.