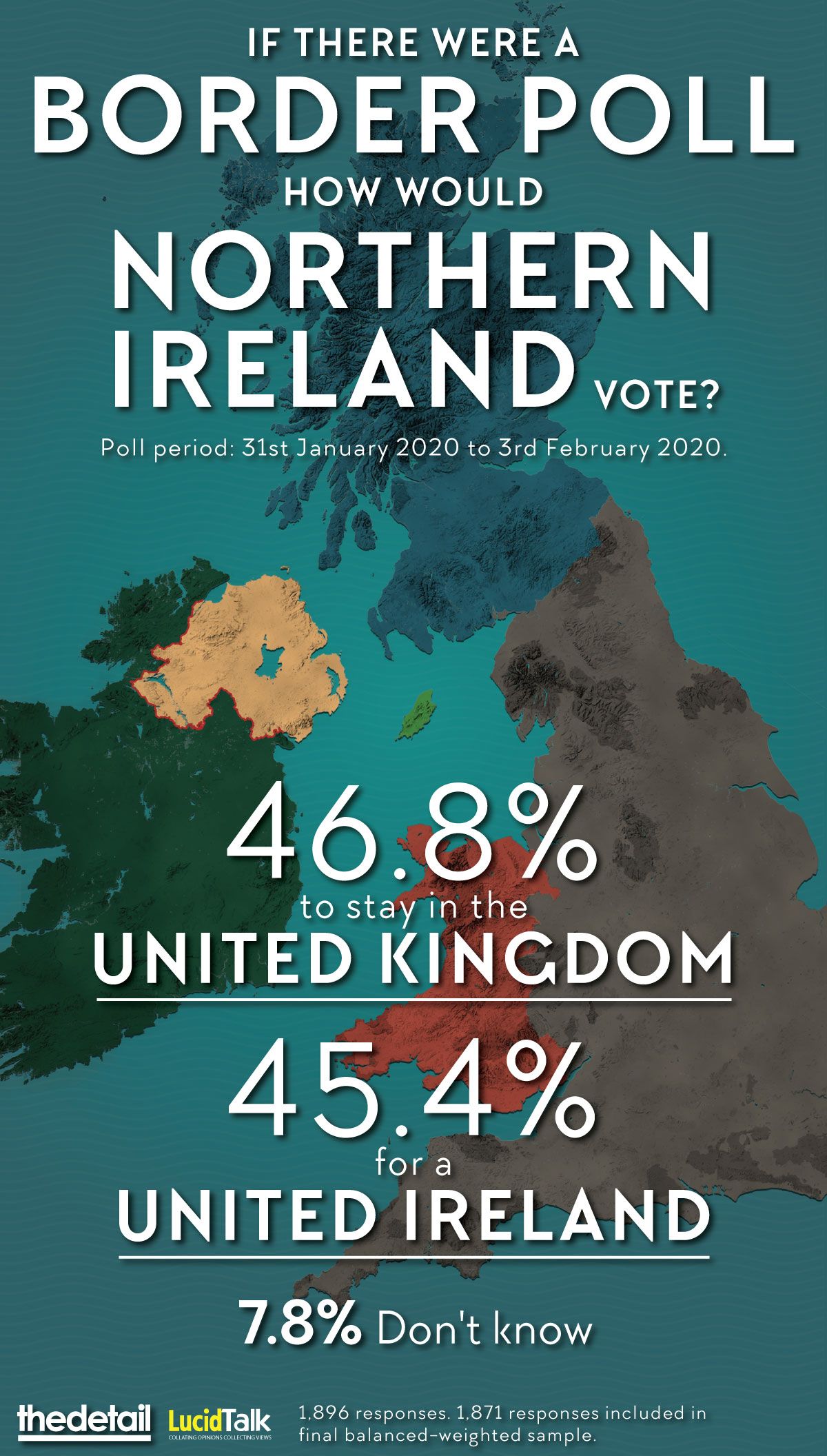 IRISH unification is becoming likelier. That’s the headline on a lead story in an edition of The Economist published earlier in February.

Written just as the first tremors of the Irish electoral earthquake were being experienced in London, this usually sober journal goes on to elaborate: “Sinn Féin’s success in the election is just the latest reason to think that a united Ireland within a decade is a real – and growing – possibility”.

But is that the case? The Detail/LucidTalk poll provides evidence to support such an argument but, in the way of polls, it also presents evidence that the drive towards a united Ireland could hit a rock.

Let’s start with the rock. The granite resistance of unionism is not just an historical fact but, according to this poll, a present day reality.

Whatever momentum there now is behind the seemingly unstoppable force of Irish nationalism this is the immovable object it keeps banging up against.

In this poll, the key question, ‘how would you vote in a border poll’, elicits the following responses: 46.8% would vote to remain in the UK, just pipping the 45.4% vote for a united Ireland.

Take out the don’t knows who make up 7.8% and then unionism not only has the larger vote, it actually squeaks over the 50% line to achieve a slimmer than slim majority.

But of course while the don’t knows can be removed in the statistical tables it is not so easy to remove them in real life, and in recent years ‘the third force’, that is the section of the electorate which votes neither orange nor green, has become the only form of politics to be on the ascendant.

The first big electoral shock came in May 2019 with the elections to the EU Parliament. The DUP/Sinn Féin duopoly was broken up by the election of Naomi Long, and when votes cast for the Greens, and sundry other independents were added in, the vote for ‘others’ accounted for over one fifth of the vote.

What was interesting about that figure is that it is in line with the demographic predictions that say Northern Ireland is moving away from a majority/minority society and heading towards a 40/40/20 configuration.

This trend was confirmed again in the December 2019 Westminster elections when the Alliance Party on its own secured 17% of the vote, and the various others took it up to the 20%.

We can now take the likely pattern for the future to be one where there are three, not two, voting blocs.

But here’s the rub. Non-binary politics faces a difficulty in a referendum question where the question is posed as a binary choice. Do you want a united Ireland or do you not? There’s no third option.

With the two main population groups balancing each other out, any referendum on Irish unity will be decided – ironically – by the very section of the electorate which feels least commitment to the constitutional issue.

That’s what makes the attitude of Alliance voters so crucial and here the poll delivers what looks like a very significant result. 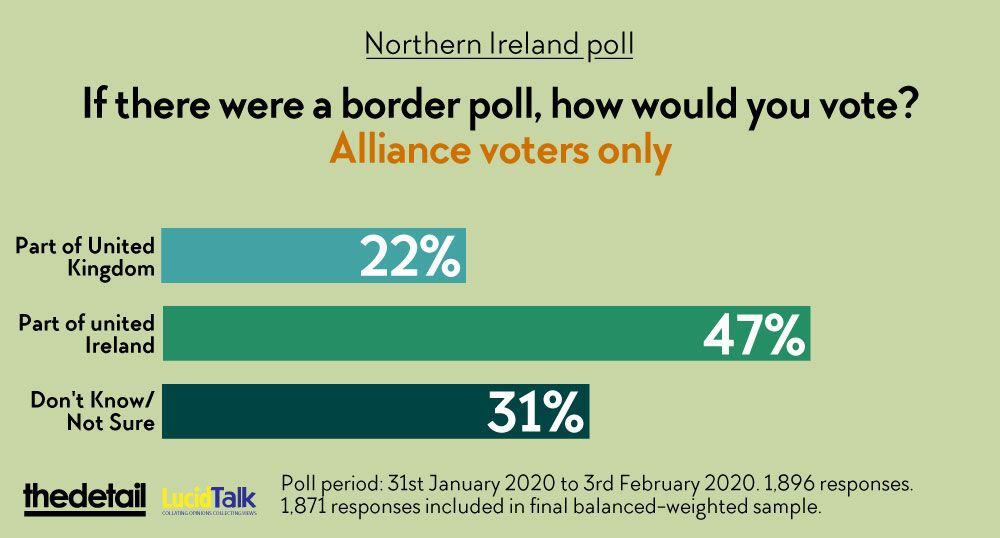 For a party that used to be defined as soft unionist that’s quite a turnaround. It may be recalled that in 2014 when Anna Lo expressed the view that she favoured a united Ireland the comment was treated as a sort of heresy and she faced public criticism from within her own party.

But somewhere along the way a tide has turned. The increased reach by Alliance is pulling in voters even in solidly nationalist areas like West Tyrone, and they in turn are changing the complexion of the party.

These voters may still hold to an Irish identity, and a vote for Alliance may not preclude a desire for Irish unity – albeit even if it is a choice they would prefer not to make.

Another telling result is that from those who self-categorised as being neither unionist nor nationalist but neutral on the constitutional question. In what seems like a re-run of the old joke about whether you are a Protestant or a Catholic atheist, those who described themselves as neutral on the constitutional question were asked which side they would favour in a referendum on Irish unity.

The result is one that confirms the Alliance supporters are swimming with a current: 65% of neutrals plumped for a united Ireland and only 14% for remaining in the UK (the remaining 21% stuck, quite reasonably, with ‘don’t know’).

Further excavation of the detail in the accompanying tables suggests that the unionist position on the constitutional question is going to take some buffeting.

The results from the Republic of Ireland show that northern nationalism can feel confident about the hinterland of support in the south.

The percentage of voters in the Republic of Ireland who would vote for a united Ireland is 73.1%. Despite the scepticism of southern pundits about the level of support for unity this figure is not out of line with other polls – allowing for the degree of variability that could be expected in response to a hypothetical scenario there is a consistent majority in favour of a united Ireland.

For example, a poll published in the Irish Independent last April showed that 62% of people in the south favour unity, a figure that rises to 70% in Connacht-Ulster which spans the border counties.

Does this matter to northern voters? It might be argued that a referendum in the north is just that, a poll conducted in one jurisdiction, and that the weight of opinion in the neighbouring jurisdiction counts for nothing, but it is a morale-booster for those who support the unity cause.

They can be comforted by an additional consideration. This poll only measures support for various scenarios when tested at one particular point in time; it cannot measure the speed of change.

However when set against a run of polls over the last three decades which consistently put support for Irish unity at around 20% it is clear that momentum has been gathering – even if estimates for the scale of the change vary (sometimes because of the immediate context in which the survey was conducted, but more often because of method).

The Detail/LucidTalk poll puts it at 45.4%, much higher than the new study by the University of Liverpool which put it at 29%, but almost identical to a recent poll conducted by Lord Ashcroft which put support in NI for a united Ireland at 46%.

The changing population demographics have been offered as an explanation for the upsurge of nationalist feeling, but it is not an explanation that stands up to scrutiny.

In the years since the Good Friday Agreement, while the Catholic population has been growing, the nationalist vote – i.e. the Sinn Féin and SDLP votes combined – has stayed stuck at around 40%.

The reason for the turn towards a united Ireland lies elsewhere, and this poll shows a more proximate cause in the Brexit imbroglio.

A series of questions in the poll on national identity give us some clear pointers. First of all, the answer which commands the greatest assent of any in the poll is in response to the question ‘do you believe that Brexit has intensified the debate about Northern Ireland’s future?’ A resounding 82.4% believe that it has.

The poll explores both the desire for a referendum and the time frame in which it might take place. Within NI 36.1% say they want to see a border poll, while 22.7 % – there’s the rock – say they never want to see such a poll. 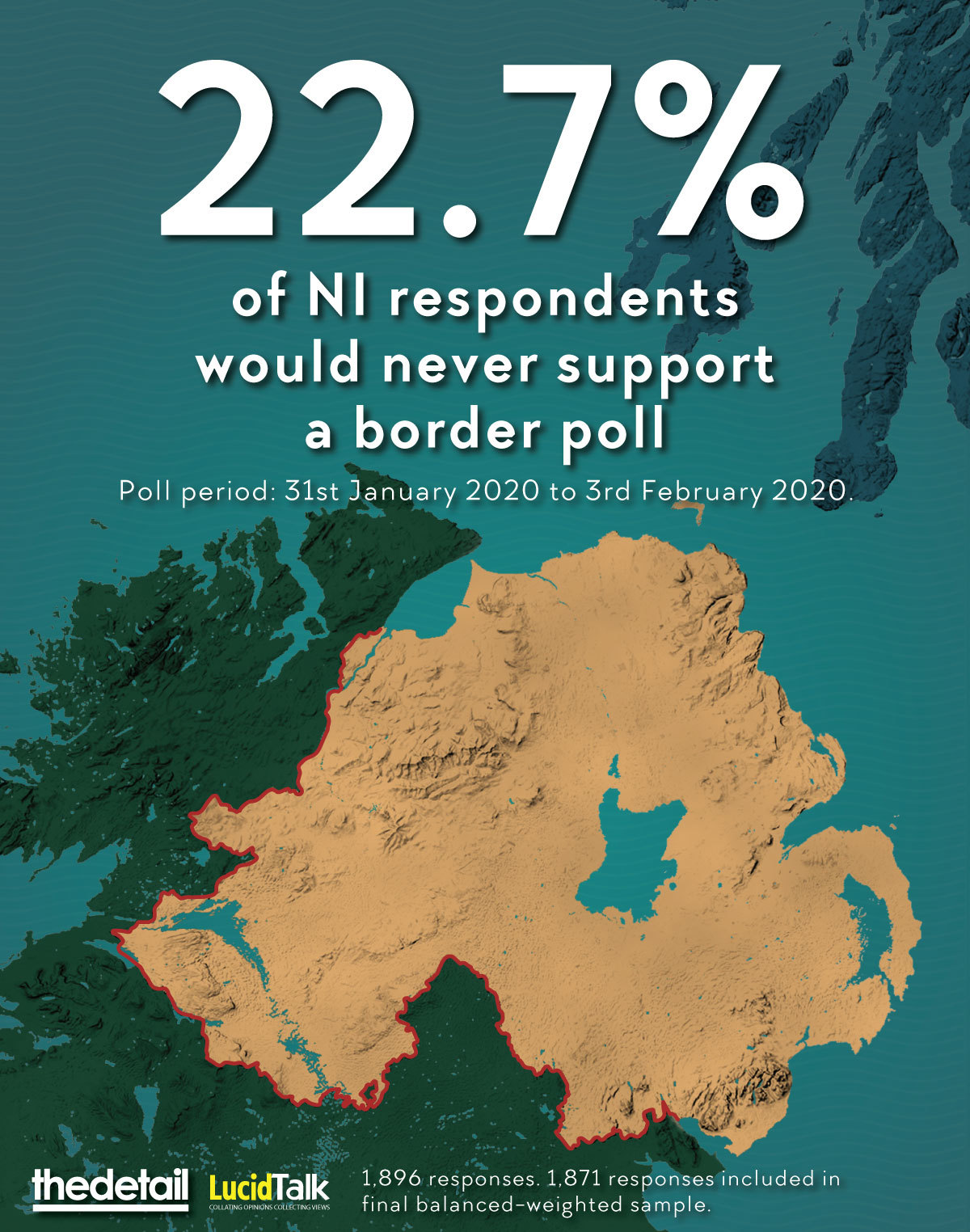 When asked when a referendum should be held 6.4% want to see it ‘very soon’, a further 35.3% want to see it within five years. Taken together, that’s 41.7% who want it within a foreseeable future – a figure broadly in line with the nationalist share of the electoral pie.

Between the two polar positions there is a wide swathe of undecided opinion: 39.4% of respondents said ‘maybe/at some stage in the future’ in response to whether they wanted a referendum.

Republicans driving the unity agenda will hope that as campaign gathers pace more and more will be drawn to support it: indeed, even by dint of the fact that everyone is talking about it the referendum begins to take on a sort of reality.

On other hand, there are the facts on the ground, so to speak. Which is to say that if a referendum looms any larger on the political horizon there could be widespread loyalist mobilisation, the threat of violence and, indeed, actual violence on the streets.

When asked what blew his government off course Harold McMillan famously replied, ‘events, dear boy, events.’ There could be a lot of events before any votes are put into any ballot box on this issue.

Receive The Detail story alerts by email
What are the logistics of a unified health service for the island of Ireland?
Dr Michael Watt: ‘Shocking’ report into deceased patients’ cases published