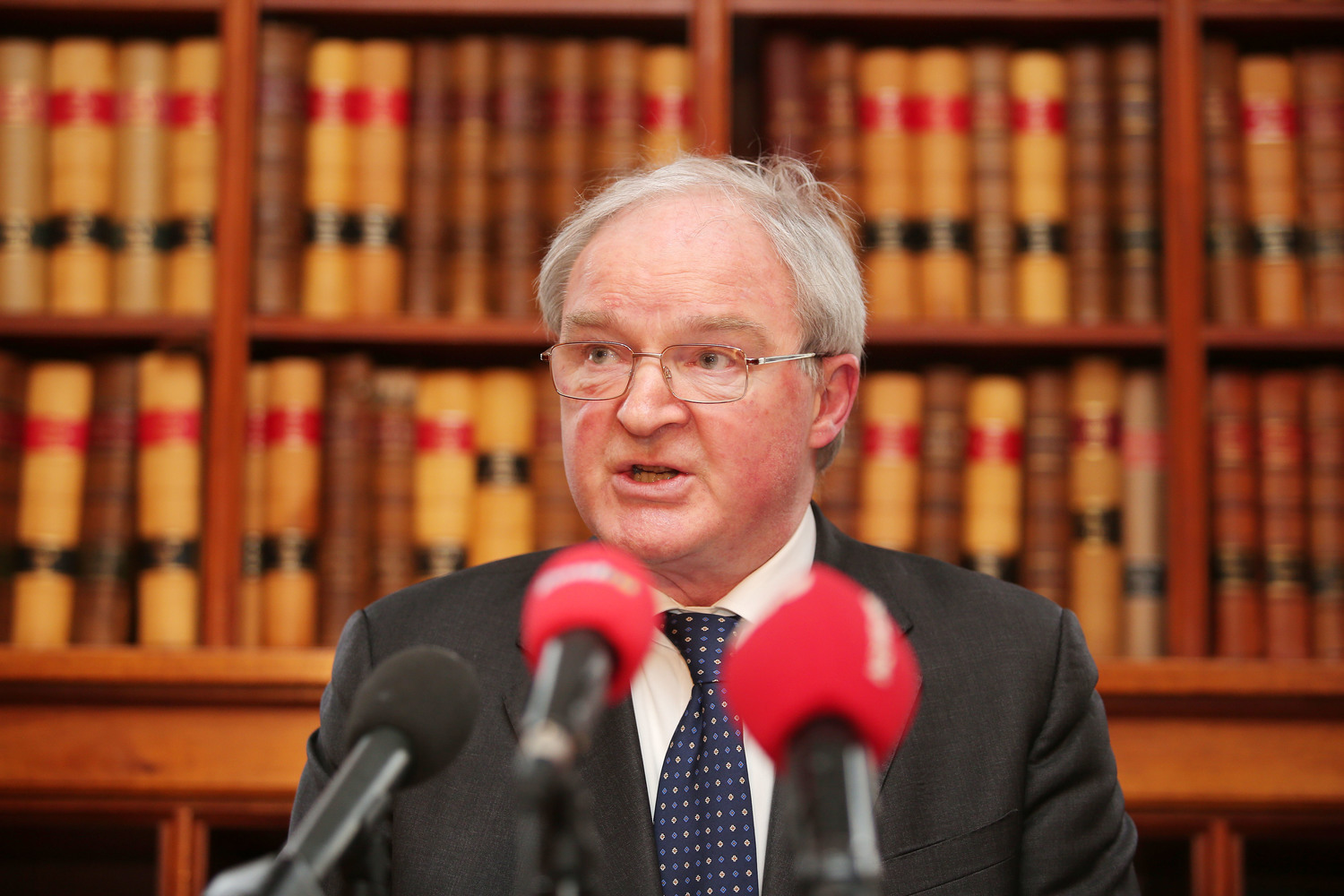 THE outgoing most senior judge in Northern Ireland has said he’s leaving the role “deeply disappointed” that the debate on legacy of the conflict has not “been taken to the victims” or to the wider society.

In a wide-ranging interview, the Lord Chief Justice Sir Declan Morgan discussed rulings on same sex marriage, the future of Stormont’s structures and the need to protect press freedom.

The 69-year-old said he thought there may come a time in the “not too distant future” when society here would have to consider if it wanted to continue with the current collective governmental structure at Stormont and start to think about government that’s held to account by politicians who take a different view.

Today is officially Sir Declan Morgan’s final day as Lord Chief Justice. Later this week, his successor, Mrs. Justice Siobhan Keegan, will be sworn in, becoming the first woman to hold the position. After graduating from Cambridge, Sir Declan was called to the Bar in 1976, becoming a Senior Counsel in 1993 and appointed to the High Court 11 years later. In 2009, he succeeded Sir Brian Kerr as Chief Justice.

Tributes have been paid from legal colleagues to his “ground-breaking” work on legacy and, in particular, his determination to bring closure to victims of the Troubles through the Coroners Courts.

But almost seven years on from the Stormont House Agreement, which included plans to establish an Historical Investigations Unit to examine unsolved Troubles murders and an Independent Commission on Information Retrieval, the failure of London and Stormont to implement the elements dealing with the past has frustrated Sir Declan.

Speaking exclusively to The Detail, the Lord Chief Justice said that when he became President of the Coroners Court in 2015, London and Stormont had failed to implement the legacy sections of the Stormont House Agreement and even now, still, “largely none of them have been put in place,” he remarked.

At the time, Sir Declan appointed Lord Justice of Appeal Sir Reg Weir QC, to conduct an in-depth review of 55 pending Legacy inquests and in an “unprecedented and much welcomed and appreciated move”, he met with victims to set out Lord Justice’s Weir’s findings and the plan to clear the inquest backlog. The Department of Justice and the Executive delayed a decision on funding, then Stormont collapsed in January, 2017. It was only in early 2020 that the funding was finally agreed, but progress was then delayed by Covid. The inquest into the Ballymurphy massacre was completed and a schedule has been agreed for inquests and Sir Declan believes the backlog can be cleared within the agreed five-year timetable.

However, the recent British Government proposals on the past include an end to all Troubles-related inquests. The Lord Chief Justice said that he, “like many others in the community, remain deeply disappointed that we have not yet reached the stage where the community feels able to sit down and have a realistic and comprehensive look at what a reconciliation package in relation to legacy would consist of.”

The Lord Chief Justice said that he thought the government’s proposals on the past will inevitably end up in the courts and that he pondered the possibility that the 2009 Eames-Bradley report will eventually be reconsidered as the way to deal with the legacy of 30-years of conflict.

“One does wonder whether, at the end of the day, Eames Bradley in 2009 is where we're going to go, but possibly in 2020 something, in the same way in one view Sunningdale in 1974 was delivered in 1998. But it's very depressing to think that you've got families who are passing down from generation to generation obligations which are enormously demanding in the lives of those people and troubling. And yet we can't, as a community, find a way of trying to recognise how we deal with that.……like many others in the community, I remain deeply disappointed that we have not yet reached the stage where the community feels able to sit down and have a realistic and comprehensive look at what a reconciliation package in relation to legacy would consist of,” he added.

During the time Stormont was down, the issue of marriage equality came in front of the courts. Sir Declan says he may not have reached the ruling he made in 2020 that there had been discrimination if there had been an Executive in place.

“One of the things that the absence of an Executive had done during that three-year period, it made it difficult for us to think about what the role of a judiciary is where you haven't got a functioning Executive. Do we have a bigger obligation to, as it were, enter into the field to correct things which are plainly supported by the public? And I had to deal with that, and I found it difficult to do, in a judgment I wrote in relation to same sex marriage. And it came towards the end of the Executive period of non‑participation, but to some extent the absence of an Executive in circumstances where there had already been a majority within the Assembly for same sex marriage, and it was clear that within the community that there was a majority for it, led to my concluding that the statutory prohibition on same sex marriage offended Article 8 of the Convention. I'm not so sure I would have reached that decision if the Executive had been functioning. And that's where the absence of the Executive places not just an onus on courts, because there's nowhere else to go, but it also places onus on courts in relation to how they should deal with an issue that comes to them,” he said.

With this in mind, the Lord Justice Chief turned to the current structures of mandatory coalition at Stormont, saying that as a society, we needed to consider whether “we necessarily want to continue to operate on the basis of a collective government as distinct from, you know, a government that's held to account by some politicians who take a different view.

“I think that's an open question. I wonder really whether, you know, there might come a time in the not too distant future where we start to think about whether we could afford to have another look at what Mark Durkan called the ugly architecture of the 1998 agreement. I mean, I think it served its purpose at the time, but it's not a legal matter, but the standing back, I'm thinking to myself, I just wonder whether there may be an opportunity to think a bit differently about it. And I do wonder whether it might produce better law. I mean, if you have challenge to what you're doing, then, you know, it brings the problems to your attention and there's more likelihood of thinking through what the difficulties might be with what you're proposing and, therefore, what the solutions might be. I think it might just bring better law,” he added.

In 2020, sitting with his successor, Mrs Justice Siobhan Keegan and Lord Justice Seamus Treacy, Sir Declan Morgan delivered a judgment against the PSNI in a Judicial Review brought by journalists Barry McCaffrey and Trevor Birney, who’d been arrested after an investigation into a leaked document linked to the Loughinisland massacre in 1994. The journalists had published the document in the documentary “No Stone Unturned”, which detailed the RUC collusion with the loyalist paramilitaries responsible. In the interview, Sir Declan defended the role of investigative journalism, saying he believed there was a need to recognise the public purpose role of the press.

“In virtually every aspect of life now, whether it's in health or politics or anything else you care to name, you will find a range of opinions, some of which have substance and some of which are complete invention. Responsible journalism has an enormous part to play in helping us through this very difficult period. The courts, of course, have to protect the integrity of what they do, and I accept that that may from time to time require intervention.

“But the bigger campaign, I think, is to secure respect for responsible journalism within the community. Because it's that which is likely to have a bigger, long term effect in terms of ensuring that the community is properly informed so that individuals can make informed choices about what they want to do." He added: “I think there is a political issue there in terms of ensuring that the support for journalism, responsible journalism, to ensure it can play its part properly within the community, the need for that is recognised.”

British Home Secretary, Priti Pretel, has announced a consultation on “Legislation to Counter State Threats,” which proposes “alarming” changes to the Official Secrets Acts (OSA). The OSA makes it a criminal offence for government officials to reveal certain kinds of classified information – and for journalists to publish it. The Home Secretary wants to broaden the definition of the information covered by the act and increase the punishments for breaking it – which could mean up to 14 years in prison for a journalist found guilty.

“The role of the press as part of the constitution, as the fourth estate, as it were, is, in my view, absolutely critical to a functioning democracy. Therefore, the responsible press has to be protected. I have absolutely no doubt about that.” He went on: “Any attempt to emasculate the press or to create a chill factor in relation to the press might well find difficulty in its adherence to the values set out by the European Court. And that would create issues around how any such legislation should be interpreted, number 1 and, secondly, whether or not it was Convention compliant,” he said.

Reflecting on the changes he has witnessed in his 10-years as Lord Chief Justice, Sir Declan said he believed the judiciary was more reflective of society than it was in the past. Two female High Court judges including the incoming Lord Chief Justice, were appointed in 2015.

“We have gay judges, there is no issue about that. And I don't think that the sexuality of judges is something that they should, if they're in the least bit, I mean, I think it would actually be uncomfortable to be parading as a judge with a particular sexual outlook or orientation. But why should that matter? And why should somebody be badged, as it were, in that way? I mean, it just seems to me that the message, you know, needs to be clear, that it doesn't matter.”

Sir Declan Morgan’s grandfather was a solicitor, although there was no one else in his family who’d entered law, until he began his career in 1976. He said it had been an “enormously interesting” period to be Lord Chief Justice.

“Partly because the law has developed as a result of the Human Rights Act, and that was an area that I was looking at when I was in practice. And partly also because, of course, devolution of justice occurred in April 2010, and the engagement of the judiciary with the, with government, became completely different. And that was something that all of us had to manage. So, I mean, it's been challenging. There are times when it's been frustrating, but overall I have enjoyed doing what I have had the opportunity to do,” he added.

He said would miss the “good humour” of the judges and the staff that he worked with each day but what he would miss most was “the excitement of learning, as I've said to you before, from each of the cases that I do. And I'm hopeful that, you know, I'm not quite at the stage yet where they're going to put me out to grass, there might be the odd thing for me to do if life is good.”