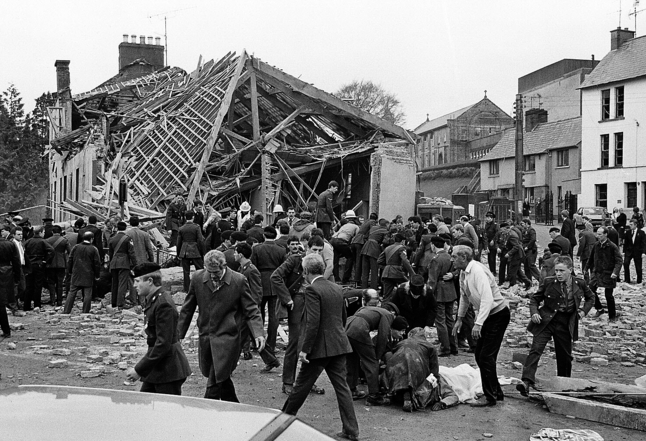 A photo from the scene of the 1987 Enniskillen bombing.

A number of seriously injured survivors and people bereaved in the Enniskillen Poppy Day bomb have begun an action in the Belfast High Court seeking to hold police accountable for failures both before and after the attack in 1987.

Two of the four men behind the action lost parents in the bombing and others include Jim Dixon, who recently underwent his 47th operation for serious injuries he received nearly 34 years ago. The four have issued writs for damages against the Chief Constable alleging negligence.

The men are at pains to point out that the people responsible for the bombing are the IRA but they also want the truth about how the bombing was allowed to happen. In particular, they are focusing on the fact that the Reading Rooms building in which the bomb was placed was not searched before the Remembrance ceremony, even though it was only yards from the War Memorial.

Eleven townspeople attending the annual Remembrance Sunday commemoration died on November 8, 1987 and a further 63 people were injured when the Reading Rooms building collapsed on them after the bomb went off. A twelfth victim, local Headmaster Ronnie Hill passed away in 2000 after being in a coma caused by his injuries for 13 years.

The RUC conducted a number of reviews of their investigations and the Historical Enquiries Team compiled a report, but to date little further detail of the events surrounding the attack has emerged. Nobody has ever been charged with any offence in relation to the attack, one of the most iconic of the Troubles.

One of the men to issue the writ, Clive Armstrong recalled that as a teenager he was standing beside his father, Ted, when the bomb went off. Clive was blown 50 yards up the street but his father died. He says “I deserve to know the truth because my dad cannot uncover the facts. This is for him.”

Another man involved in the action is James Mullan, whose father and mother William and Nessie Mullan were killed. James recalls being there on the day and describes the scene as “a vision of hell on earth. Evil and carnage.”

He says that the failure to search the Reading Rooms was a “dereliction of duty” and says the security of the public was compromised, a lapse which “contributed to the murder of 12 civilians and over 60 persons including children.”

Another of those leading the action is Jim Dixon who suffered serious facial injuries before he was pulled from the rubble by rescuers. Mr. Dixon has been campaigning for the truth for 34 years. He is not issuing a statement at this time as he is recovering after a fire destroyed his home earlier this year.

A fourth man to issue a writ, Joseph Holbeach was buried under the rubble. Although he escaped serious physical injuries, he says he has suffered badly with mental health problems ever since and he now “would like to know why the Reading Rooms was never searched.”

Barry O’Donnell Solicitor at KRW LAW who are representing the families reiterated that “The families make it very clear that it was the Provisional IRA who planted the bomb in which their family members were murdered and other innocents were injured. The legal action my clients have taken relates to serious and justified concerns they have around the decision making and policy and procedures which resulted in the Reading Rooms from not being searched.”

Clive Armstrong said he can still vividly remember standing beside my father and Stephen Ross, another teenager who received serious injuries and needed to wear a wire cage around his face after surgery.

Mr Armstrong says: “Despite the years passing the memories are vivid and the question which I return to year after year is why weren’t the Reading Rooms searched?

“I know from the incomplete draft Historical Enquiry Report that a witness described as Witness A and four other men left the Reading Rooms at 0040hrs on Sunday 8th November 1987 and he stated to Police that when he drove out of the Reading Rooms car park, the gates were open and that these gates were always left open.

“What concerns me is why the Police never searched the Reading Rooms building. If a police/army search dog had of been sent into the building there would have been a strong possibility that the dog would have picked up a smell of the explosives used,” says Mr. Armstrong who adds: “I cannot help but rationalise in my mind, if the Rifleman from the Duke of Edinburgh Royal Regiment had of been tasked to get that gate open and search the building then there is a possibility that the explosives may have been located."

James Mullan also recalls being there on the day with his ten-year-old son, Adam. “When the bomb went off large chunks of glass fell all around us from the big shop windows and from the windows above. We were lucky to survive without serious injury. Words do not adequately describe the bomb scene. Nothing could prepare you for the horrors we saw and heard. A vision of hell on earth. Carnage and evil.”

He later went to look for his parents, and recalls: “Agonising. No one I spoke to knew where they were but I was told that the hospital was treating dozens of injured, so I went there and then to the Presbyterian church and then to my parent’s home and back to the hospital again where one of the staff nurses asked me if I had checked the mortuary. A Policeman who was standing close by offered to help and telephoned someone at the mortuary and confirmed my worst fears. Both my parent’s bodies were lying there on the cold concrete floor.”

“Not an ideal end to two very happy, productive and honourable lives, taken by the IRA. We will never forgive or forget what they did to my parents,” he goes on.

Mr. Mullan says that the then Chief Constable, Sir John Hermon repeatedly stated in press interviews that the Reading Rooms were not searched because they were “a secure area”, despite the rooms being searched each year previously. He was obviously unaware of the unsuccessful attempts by the search team to gain access to the buildings because a key holder could not be found to unlock the premises.

“Most, if not all the six to seven hundred members of the public assembled for the Memorial service would have assumed that the area and the entire route of the procession would have been searched thoroughly and signed off as secure,” says Mr. Mullan.

He insists: “The Police have continued to voice this absurd opinion which is plainly wrong.

"The Police were there that day to oversee the security of the Memorial service and the parade to the Church. It is nonsense to claim that a building closest to the War Memorial was somewhat different from all the other premises searched. The security of the public was compromised and this lapse contributed to the murder of 12 adults and injury to over sixty persons, including children. That is a fact. Period.”

“If that is not a dereliction of duty what else would one call it?” he said.

A PSNI spokesperson said: "It would be inappropriate to comment on this matter if legal proceedings are pending."