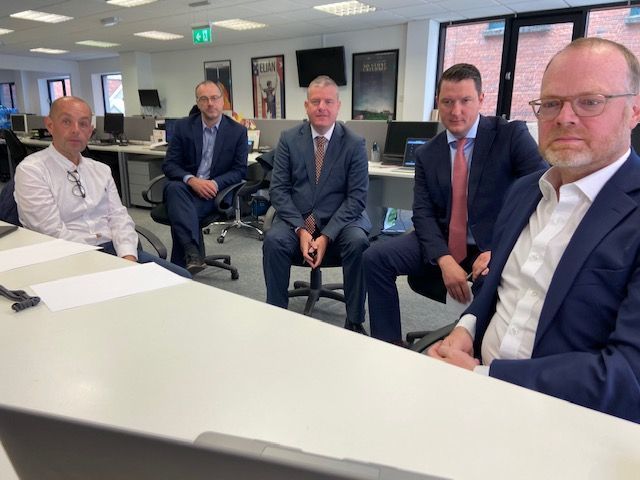 SEARCH warrants that led to the homes and office of journalists Barry McCaffrey and Trevor Birney being raided by PSNI and Durham police officers have been quashed in the High Court.

David Davis MP, who attended the judicial review hearings in May last year, said the judgement “sets a strong and authoritative precedent for press freedom across the whole of the UK”.

Amnesty International, which launched a campaign of support for the two journalists, described the PSNI action as “outrageous” and said that the judgment “should mean this sort of undue interference with press freedom never happens again".

The search warrants, unlawfully sought to enable the PSNI and Durham Constabulary to retrieve two documents leaked to the journalists, were used by police to illegally remove computers and notebooks, and to download the contents of a server used to store confidential documents along with film footage.

Mr Birney and Mr McCaffrey were both arrested during the operation on August 31, 2018.

The journalists helped produce an investigative documentary looking into the 1994 Loughinisland massacre in which six men died.

The warrants were sought after staff from the Police Ombudsman’s office notified the PSNI that the journalists had acquired sensitive documents, marked ‘secret’, relating to a report into the Loughinisland killings.

Mr McCaffrey had received the documents from an anonymous source.

The unredacted documents contained the names of those suspected to have carried out the Loughinisland killings, when six men were murdered while watching the Republic of Ireland playing in the World Cup.

Staff from the Police Ombudsman’s office were given a private screening of the documentary and afterwards alerted the PSNI to the use of the documents in the film.

This led the PSNI to bring in Durham Constabulary to investigate. The PSNI and Durham made an ex-parte application to the HIgh Court in Belfast for the warrants to search the journalists homes and offices.

Delivering the 19-page judgment, Sir Declan Morgan criticised the nature of the application made by Durham Constabulary to gain the search warrants.

He said: “Any warrant which was issued could only relate to those paper documents. It could not possibly include the taking of electronic and other digital material.

“That should have been made absolutely clear to the trial judge (who conducted the ex-parte hearing) and the failure to do so is inexplicable.”

Prior to this, the documentary production team had alerted former PSNI Assistant Chief Constable, Stephen Martin, that they knew the names of the chief suspects and were considering naming them. The journalists had gone to the PSNI to establish if there was any security reason not to name the suspects.

The PSNI took no action to prevent the naming of the suspects and, instead, oversaw the operation which led to the arrest of the journalists.

The Lord Chief Justice also referred to an email exchange, discovered on the server unlawfully downloaded in the raids, between Mr McCaffrey and Mr Birney where the journalists discussed the possibility that the police could try to establish the source of the leaked documents.

Sir Declan Morgan said: “Unsurprisingly both of them were anxious to ensure that they should take all steps to try to protect the identity of the source including the deletion of material.

“There is nothing suspicious or inappropriate about this. It is exactly what one would expect a careful, professional investigative journalist to do in anticipation of any attempt to identify a source.

“It does not lead to any inference that such a journalist would commit a contempt of court.”

Patrick Corrigan from Amnesty International said: “As a result of their wrongful actions, the police damaged public confidence in policing in Northern Ireland. The chief constables of Durham Constabulary and the PSNI owe apologies to Trevor Birney and Barry McCaffrey, their families and colleagues.

“It has been deeply troubling to see police trying to jail journalists who helped expose human rights abuses, rather than bring to justice the killers who took the lives of six innocent people.

“It remains unacceptable that the bereaved families of Loughinisland are today not an inch closer to justice than 26 years ago, when the police promised they would leave ‘no stone unturned’ in the pursuit of the killers.”

Michelle Stanistreet, NUJ general secretary, said: "This case is an important and historic victory for all journalists working in the public interest.

“We very much welcome the decision of the judges to quash the warrants and the bold emphasis they have placed on the right of journalists to protect their sources.

“Today they have clearly stated that the most appropriate procedures to use in law in any attempt to access journalistic material is not ex-parte search warrants.

"Journalists must not be treated as criminals.”

Conservative MP David Davis said: "Today's judgment is a fantastic victory, not only for Barry McCaffrey and Trevor Birney – who have been treated appallingly by the PSNI – but also for journalistic freedom across the UK.

“In fighting this case, Barry McCaffrey and Trevor Birney have made immense personal sacrifice to uphold and defend the rights of journalists throughout the country.

“The judgment sets a strong and authoritative precedent for press freedom across the whole of the UK.”

Mr Davis called on the Chief Constable of the PSNI Simon Byrne, to “apologise unreservedly to Mr McCaffrey and Mr Birney”.

He continued: “Although this happened under his predecessor's watch, he must take this opportunity to wipe the slate clean, return or destroy all data and information illegally obtained, facilitate the fastest possible mediation concluding within days, not weeks, and ensure an incident like this never happens again."