Major rise in hotel use for asylum-seekers: “It feels like we are in a prison” 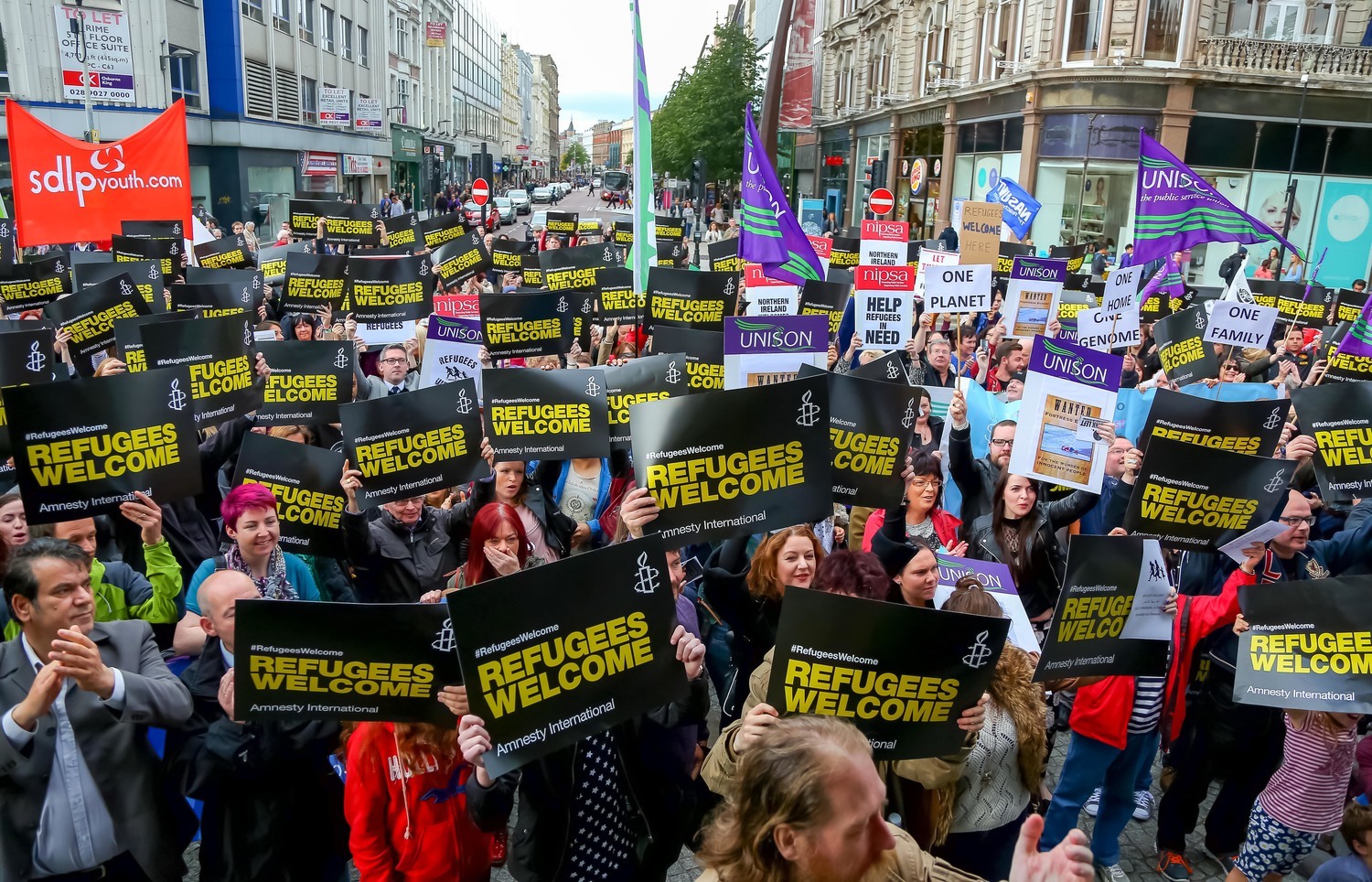 Rally for refugees in Belfast. Photo by Press Eye.

THERE has been a dramatic increase in the number of asylum-seekers staying in hotels in Northern Ireland, leading to calls for an end to such placements.

In June 2021, just 14 asylum-seekers in Northern Ireland were staying in hotels.

However, by December 2021, The Detail can confirm this figure had risen to 807 – over half of all the asylum-seekers here at the time. By April 2022, the number of asylum-seekers in hotels had risen again to 1,067.

Some asylum-seeking families have spent over six months in hotels, despite UK Government policy dictating that they should stay in such conditions for a maximum of six weeks.

He told The Detail: “Hotels should only ever be used as a short-term emergency measure for the provision of accommodation for people seeking asylum.

“Cramped living conditions, an institutionalised regime and lack of facilities to prepare food are unacceptable for anyone – but are especially harsh for families – and particularly for such long periods of time.”

The summer of 2021 saw protests in Carrickfergus, with those in attendance angry that asylum-seekers were permitted to stay in the town’s Loughshore Hotel.

Due to concerns about the safety of them and their loved ones, we are protecting the identities of three men from asylum-seeking families – from Palestinian, Kurdish-Iraqi and Syrian backgrounds – who have spoken to The Detail.

The Kurdish man told The Detail: “Our family have been in the hotel for more than seven months. I don’t understand how it takes this long, we never thought it could be this bad.”

The Syrian man said: “My son is sixteen, but he doesn’t look sixteen because he’s losing so much weight as he’s not eating properly at all. He now has anaemia because of this.

“We can’t even take bread or fruit to the room and we have to eat at specific times which is difficult for the young children, especially when the food is so different to what we are used to.

“If you come down at the meal-time to eat at the hotel, you’ll hardly see any kids. It means they aren’t eating. I have seven children but we are not allowed to cook for them.

“We just want to be able to give them food at an appropriate time which suits them. It feels like we are in a prison.”

It’s challenging to get school places for children while in the restrictive hotel environment, but the Palestinian man managed to get his nephew into formal education.

He said: “We are very happy with the school, but our children are also not eating the food in the hotel. We just want to be in a home like a normal family where we can look after them properly.

“My family has been in the hotel for six months. I’m fit and able, I want to be able to work legally.” 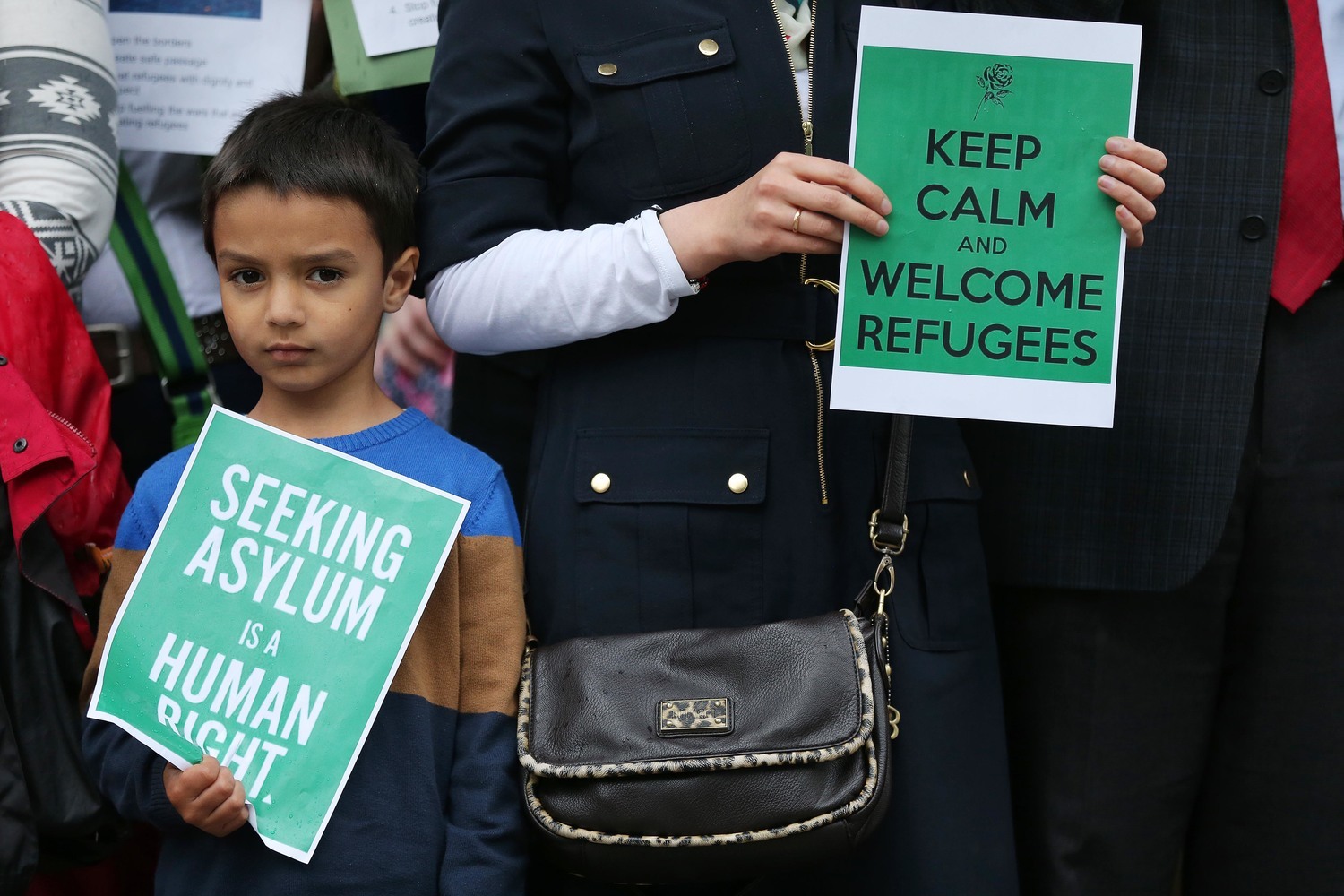 Protestors on the Dublin Road in Belfast. Photo by Kelvin Boyes, Press Eye.

Participation and the Practice of Rights (PPR), a rights activism organisation, has a campaign to ‘lift the ban’ on asylum-seekers working in Northern Ireland.

This is driven by the fact that, in almost all cases, asylum-seekers here cannot work until they get refugee status and they sometimes have to wait – up to 10 years or longer – to get this approval.

The Kurdish man said: “My daughters and my wife are all in distress. I need to provide a good life for my family.”

Twasul Mohammed works for PPR. She fled her home country of Sudan, due to civil war, and arrived in Northern Ireland as an asylum-seeker with her two children five years ago. Her husband joined 18 months later.

Ms Mohammed believes “asylum-seekers should be moved out of hotels as soon as possible”.

She told The Detail: “It used to be that you would stay in temporary accommodation for the first three weeks but it wasn’t a hotel, it was an apartment.”

Ms Mohammed said the first three weeks were “really, really hard” because her children were not in school.

However, she added: “Now it’s even worse for families arriving because people are in hotels. Some families are big, with four or five kids, but they don’t have family rooms for everyone.

“Some families have children that are too young to be in their own rooms so they all are packed into one room and are sleeping on the floor.

“One mother called me at night and said ‘my kids are crying because they are hungry, we were begging for food at the reception and they aren’t giving it to us’. It’s heart-breaking.”

Hotels vary in the extent to which they permit asylum-seekers to spend time away from their premises. “They have to sign out and in whenever they leave,” Ms Mohammed said.

“They get £8 per person per week. The money they are given isn’t even enough to buy sanitary products or extra milk for babies because they don’t get enough at the hotels.

“All the families we are supporting have fled their home countries looking for a safe place only to find themselves in this inhumane situation.”

Amnesty International’s Patrick Corrigan said the use of hotels causes isolation and “hinders people’s ability to restart their lives”.

He also said: “For those who have suffered torture or other trauma, it can severely compromise their rehabilitation. The root cause of this problem is an inhumane and increasingly punitive immigration and asylum system.”

Mr Corrigan then accused the Home Secretary, Priti Patel, of leaving people "in limbo (by) deliberately causing delays and backlogs as part of her bid to make life miserable for refugees”.

The Home Office said it would not comment on “operational arrangements for individual hotels”, but a spokesperson told The Detail: “Asylum accommodation is offered on a no-choice basis across the UK.

“We continue to ensure that the accommodation provided is safe, secure and leaves no one destitute – and ensure it is appropriate for an individual’s needs.” 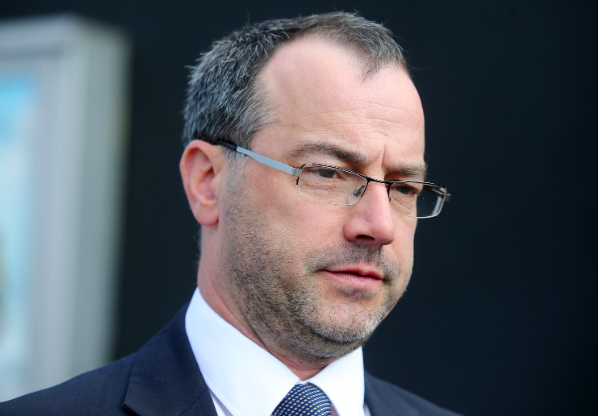 The number of hotels providing accommodation for asylum-seekers in Northern Ireland has grown significantly over the last year. By April 2022, 14 hotels were providing this service.

From the summer of 2019 onwards, the Mears Group – a private company which signed a £113m contract with the Home Office, running until August 2029 – became responsible for sourcing accommodation for asylum-seekers in the UK.

None of the men, who The Detail spoke to, are happy with the Mears Group – believing the company does not care about the difficulties they have faced.

The Mears Group told The Detail the rise in the placement of asylum-seekers in hotels is “due to the rise in the number of people seeking asylum” and maintained it’s “only a contingency measure”.

“Supporting the welfare of service users is of the utmost importance to Mears,” the organisation said. The Mears Group also said its working with local authorities and other bodies to help asylum-seekers.

The company continued: “There are on-site resident welfare managers at hotels to assist with any issues.

“Service users are provided with their own room, all meals and snacks, access to health and welfare support and other provision – including social and leisure activities."

In addition, the Mears Group referenced how hotels have play areas for children – supported via Barnardo’s and Belfast City Council – and reading sessions provided by Libraries NI.

The organisation said: “Mears will continue to do all in its power to end hotel use and to do this we’re working closely with local authorities to source suitable new accommodation and ensure that our service users are found a home in the community.”

Amnesty International’s Patrick Corrigan said: “The uncertainty for people seeking asylum, alongside the woefully inadequate accommodation in which many refugees have been effectively abandoned, is horrendous.

“Sadly, this is failure by intention – and at enormous human, and financial cost.”

The spike in the number of asylum-seekers being placed in hotels occurred during the period in which Afghan asylum-seekers arrived in Northern Ireland, following the withdrawal of western troops who had been stationed in the central Asian country for two decades. This was followed by the crisis in Ukraine.

PPR’s Twasul Mohammed said the government’s Homes for Ukraine scheme represented a “big difference” to how the asylum-seekers in the hotels are being treated, many of whom are from countries like Somalia, Eritrea and Syria.

However, the Syrian man who spoke to The Detail recognised there were also Ukrainian families in his hotel “experiencing the same conditions”.

In addition, asylum-seekers who arrived in Northern Ireland from February 2022 onwards could be subjected to the Home Office’s Rwanda plan – which aims to send asylum-seekers to the African country to be dealt with there.

Ms Mohammed said the plan reflects a further attempt by the Home Office to create an "atmosphere of hostility" for asylum-seekers.