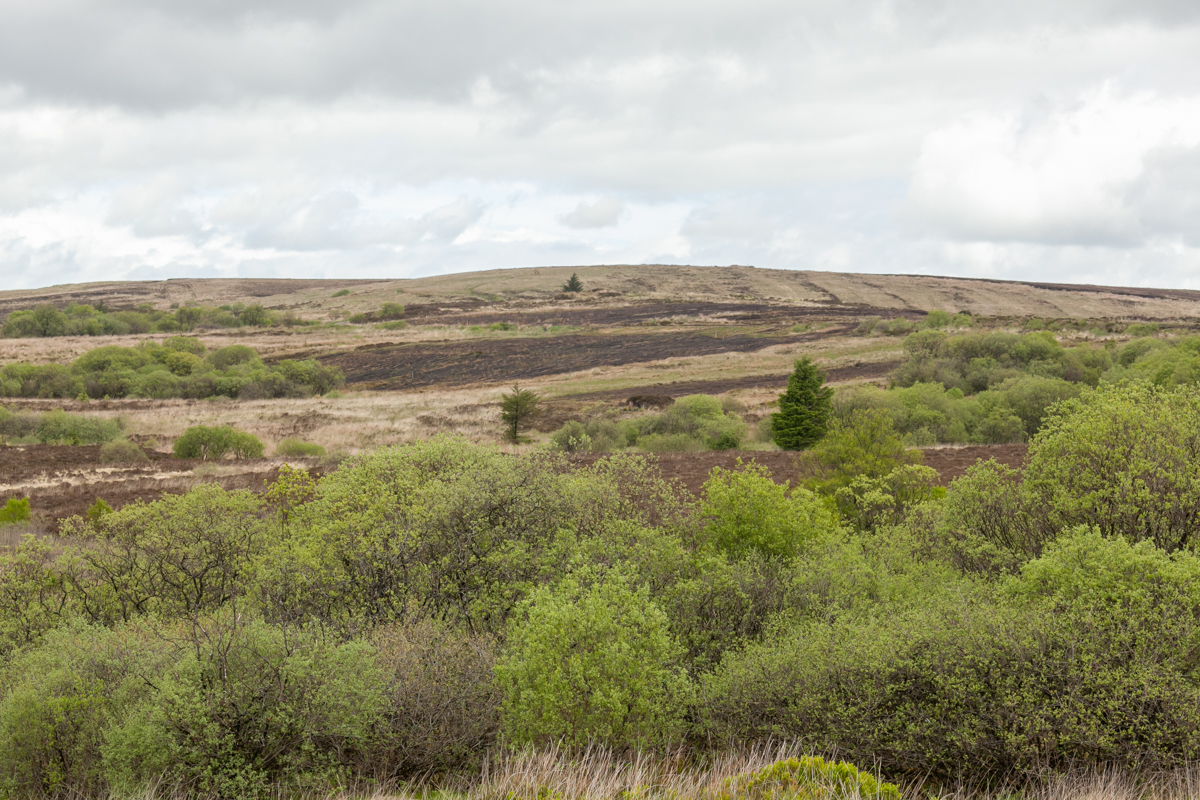 A high proportion of new poultry farms approved in Northern Ireland are close to protected nature sites, despite the vast majority of these sites already being severely ecologically depleted.

Since 2015, in the councils where the vast majority of new poultry farms are concentrated, more than 70% of such farms have been developed within 7.5km (4.7 miles) of protected nature sites.

The Environmental Justice Network of Ireland calls ammonia pollution “one of the most serious environmental challenges faced in Northern Ireland”.

Despite this, planning files from local authorities here show that most proposed farms continue to be granted planning approval – even when they’re situated near such nature sites. 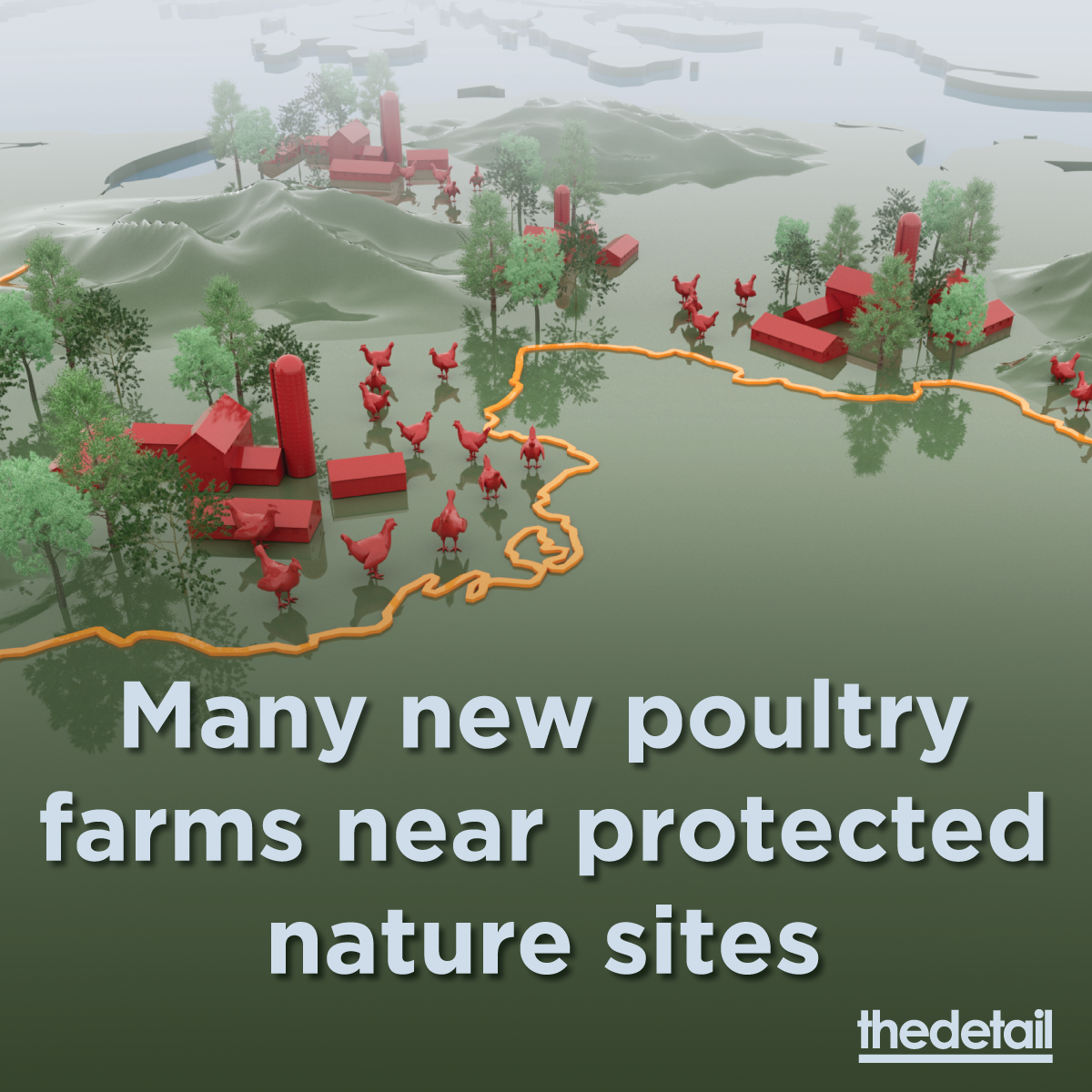 Policy responsibility for ammonia and its impact on the environment in Northern Ireland lies with the Department of Agriculture, Environment and Rural Affairs (DAERA). The department is also a statutory consultee to the planning system.

The Department for Infrastructure (DfI), which has regional oversight of planning decisions in Northern Ireland, acknowledges that DAERA’s approach to assessing ammonia levels requires remedy.

A DfI spokesperson told The Detail that DAERA’s input on planning applications “does not reflect up-to-date scientific data and recent case law”.

In addition, a recent international court case highlighted how the approach to measuring ammonia thresholds in Northern Ireland is out-of-step with the most up-to-date international standards.

Environmental groups have lodged complaints with authorities in both Northern Ireland and the Republic over what they see as a failure to deal with the build-up of factory farms on both sides of the border, which they argue is in contravention of EU environmental laws which still apply here post-Brexit.

Friends of the Earth’s director in Northern Ireland, James Orr, called Stormont’s approach “disastrous for the environment” and he referenced two DAERA strategies – the department’s ‘Going for Growth’ strategy and its biodiversity strategy.

Going For Growth was introduced in 2012 and the number of intensive poultry factories more than doubled from 2011 to 2017.

Mr Orr told The Detail: “Unlike any other strategy in Northern Ireland, every element of the Going for Growth strategy was met and exceeded.

“They went for this factory farming model and succeeded in just a few years. They just took the bull by the horns, literally, and went for it.”

For example, Moy Park – which dominates the poultry sector here – was processing five million chickens per week in 2015, up 60% from just six years earlier.

Moy Park said that all of its expansion plans are subject to "highly regulated" environmental modelling and that no decisions are taken without full planning permission. 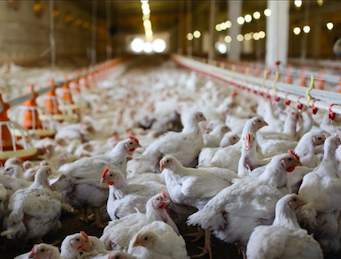 Mr Orr also said Going for Growth was promoted at the expense of DAERA’s environmental responsibilities.

He added: “At the same time as Going for Growth, there was a biodiversity strategy trying to grapple with one of the most ecologically depleted parts of the world – which is what we are.

“Virtually none of the targets in the biodiversity strategy were met. We had this collision course which should have been mediated by governance, but it wasn’t.”

Mr Orr said this led to the sharp increase in farms in Northern Ireland in recent years, with many concentrated along the border.

A similar approach to agricultural policy was also adopted in the Republic of Ireland. Many of these farms are in border areas, with 74% of the Republic’s poultry farms concentrated in Monaghan and Cavan.

Mr Orr said the rise in farms near protected nature sites along the border is the “manifestation of broken governance”, representing another “consequence of the system that led to RHI” and other failed schemes.

He also said the Northern Ireland Environmental Agency (NIEA), which is part of DAERA, is “politically captured”.

“You have this behemoth – which is DAERA – and this wee, tiny element that’s trying to regulate it.

“It’s the job of the NIEA to intervene but it can’t do it because you have policy people within DAERA trying to push a ‘growth agenda’ which gets prioritised over protecting the environment.”

However, DAERA told The Detail the impact of planning applications which are close to protected nature sites are properly assessed, and that it provides guidance to councils on such issues.

Councils have maintained they follow all the relevant laws with regards to approving agricultural planning applications.

Mr Orr referenced how, in recent years in Northern Ireland, expansionist agricultural policies have won out over environmental concerns – even when they are raised by state agencies.

This was aimed at setting the ammonia contribution level, at which farming applications require further assessment, at 0.1% – 10 times lower than DEARA’s current policy.

SES attempted to implement this new protocol following a 2018 European Court of Justice decision, relating to ammonia levels in the Netherlands, which would have put Northern Ireland in line with the most up-to-date international standards.

If a farm were to surpass the ammonia threshold, under the SES’ proposal, the farm wouldn’t automatically be blocked from being developed.

But it would necessitate a cumulative ammonia assessment of the proposed farm – along with farms in the neighbouring area – to establish if, collectively, they were in breach of the threshold.

However, in November 2019, SES was subjected to legal action from the influential Ulster Farmers’ Union – which argued the new changes would make it “virtually impossible” for the farming sector.

The union later received backing from DAERA Minister Edwin Poots, in its opposition to SES’ ammonia plan, and called for the environmental body to be disbanded.

The Ulster Farmers’ Union told The Detail it took the legal challenge against SES over the environmental body’s “decision to change planning rules for assessing ammonia for farm applications without any warning or consultation…or proper consideration”.

Following Minister Poots’ intervention, the SES declined to apply the new threshold until DAERA introduced fresh guidance on the matter.

According to SES’ head, Paul Duffy, the department provided assurance that a new ammonia threshold protocol would be published in “a matter of weeks”. However, well over two years has passed and the guidance has still not been introduced.

In a February 2022 report, the Audit Office said DAERA’s current approach is unclear and “creates significant uncertainty” in the planning system.

The department has declined to confirm when the draft ammonia strategy will be published for public consultation – but said Minister Poots is “currently considering the latest revision”. 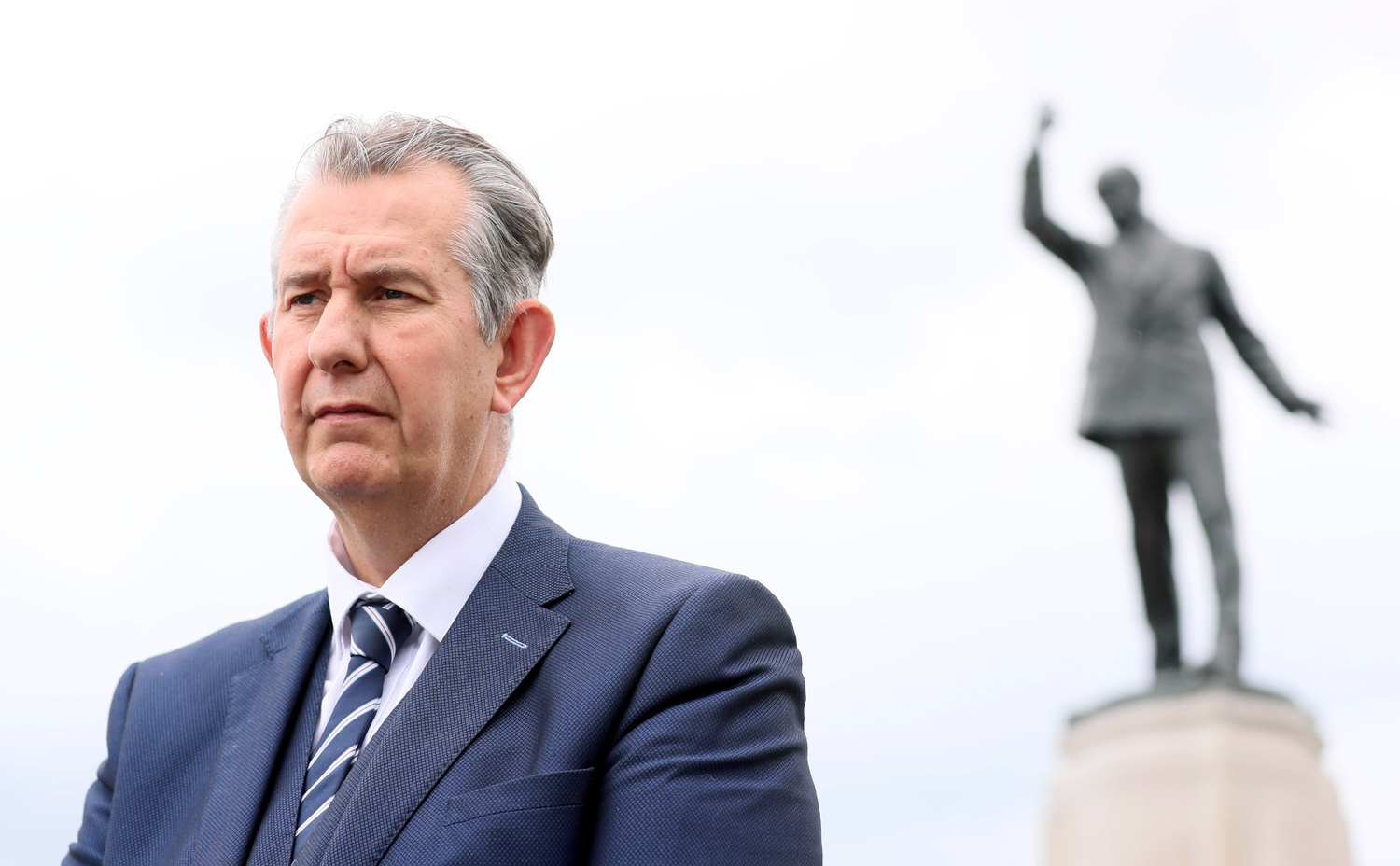 DAERA Minister, Edwin Poots, whose department is yet to introduce the new ammonia strategy. Photo by Jonathan Porter, Press Eye.

The challenges posed by chicken waste has been a well-established problem in Northern Ireland.

In May 2012, Sinclair Mayne – a scientific advisor in the old agriculture department – told the Agriculture Committee of the jurisdiction’s inability to handle the amount of poultry waste being produced. The number of poultry farms here has risen significantly since then.

Some local farmers send their waste to other farms in Northern Ireland for land-spreading.

However, exporting animal waste to the Republic of Ireland is an approved method used with increasing frequency since 2015. The waste is regularly sent to destinations just across the border.

In some councils, 100% of all new poultry developments are exporting their litter across the border. This is despite the Republic of Ireland also exceeding its ammonia levels.

Yesterday, our team – made up of reporters for The Detail, The Guardian and Noteworthy – revealed there have been dozens of cases in which official documents, relating to the export of poultry litter to the south, were allegedly either completely “falsified” or “altered” without knowledge or consent.

These letters – which were purportedly issued on behalf of Teagasc, an agri-food body in the Republic of Ireland – have been used to verify that farmers in the south can take animal waste from Northern Ireland sources and to satisfy local planning authorities that the ammonia from the waste won't have an impact north of the border.

However, there are concerns about whether or not councils should be relying on these letters at all in order to approve farmers’ applications.

Friends of the Earth’s James Orr called even the use of legitimate Teagasc letters “bizarre” and said: “Teagasc isn’t a statutory consultee for planning authorities. It’s an advisory body to farmers.

“Teagasc hasn’t got the experience, authority or capability to advise on ammonia thresholds and other environmental assessments.”

In addition, Teagasc has admitted it is not the appropriate agency to provide such assessments.

DAERA said that, in June 2021, it sought legal advice on the reliance of Teagasc letters.

The department said: “The advice affirmed that the purpose of the Teagasc letter is to confirm the recipient is a bona fide farmer in the Republic of Ireland with the capability to utilise the manure from the development at the location stated.

“The advice also affirmed that planning authorities (councils) are responsible for determining the need for transboundary consultation and undertaking Habitats Regulation Assessments”, a process that determines whether development plans could negatively impact nature sites.

However, our analysis of planning files from Northern Ireland shows that such transboundary assessments have rarely been carried out by authorities on either side of the border.

An Taisce, the National Trust for Ireland, has taken issue with this. The organisation sent correspondence to DAERA and the Republic’s Minister for Agriculture, Charlie McConalogue, in March 2021 – claiming international obligations have therefore “not been discharged…adequately or at all, in relation to transboundary emissions of ammonia”. 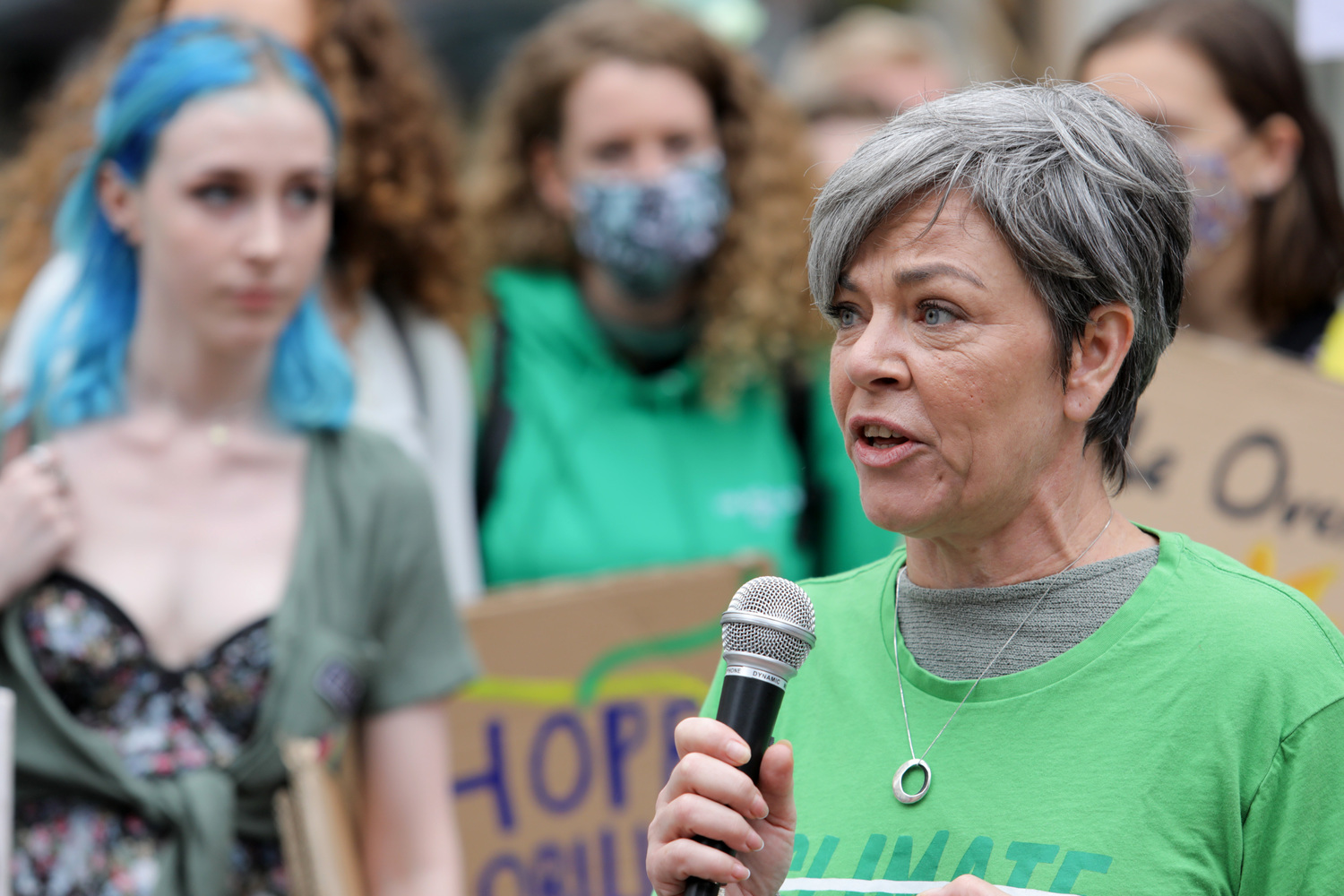 A proposed solution for animal waste produced in Northern Ireland is to send it to anaerobic digester (AD) plants, a renewable energy technology, here or in Scotland.

Minister Poots has said he aims to accelerate the rollout of new AD plants across Northern Ireland, not just to try and solve the problems associated with ammonia – but also due to energy security concerns.

This would likely require the development of hundreds of new AD plants. At present, there are at least 139 operating AD sites in Northern Ireland – many of which are close to protected nature areas which have reached critical levels of ammonia.

However, as far back as 2012, Stormont’s then-agriculture department recognised that AD plants don’t “address the fundamental issue” because – while they create energy from the manure – they don't remove the harmful ammonia.

Earlier this year, England’s Office for Environmental Protection (OEP) had its remit extended to include powers in Northern Ireland. This also happened with a view to protecting the environment.

However, Claire Bailey – the former Green Party MLA for South Belfast (Green Party leader) – said: “It remains to be seen how the OEP will function in Northern Ireland and how effective it will be.”

Friends of the Earth’s James Orr believes there needs to be an independent Environmental Protection Agency set up in Northern Ireland.

Such an agency was agreed to in the January 2020 New Decade, New Approach deal to get the Stormont institutions back up and running at that time.

However, Mr Orr said: “The ‘success’ of the growth agenda in the agriculture sector means that there is simply too much animal waste being produced, to the detriment of our environment.”