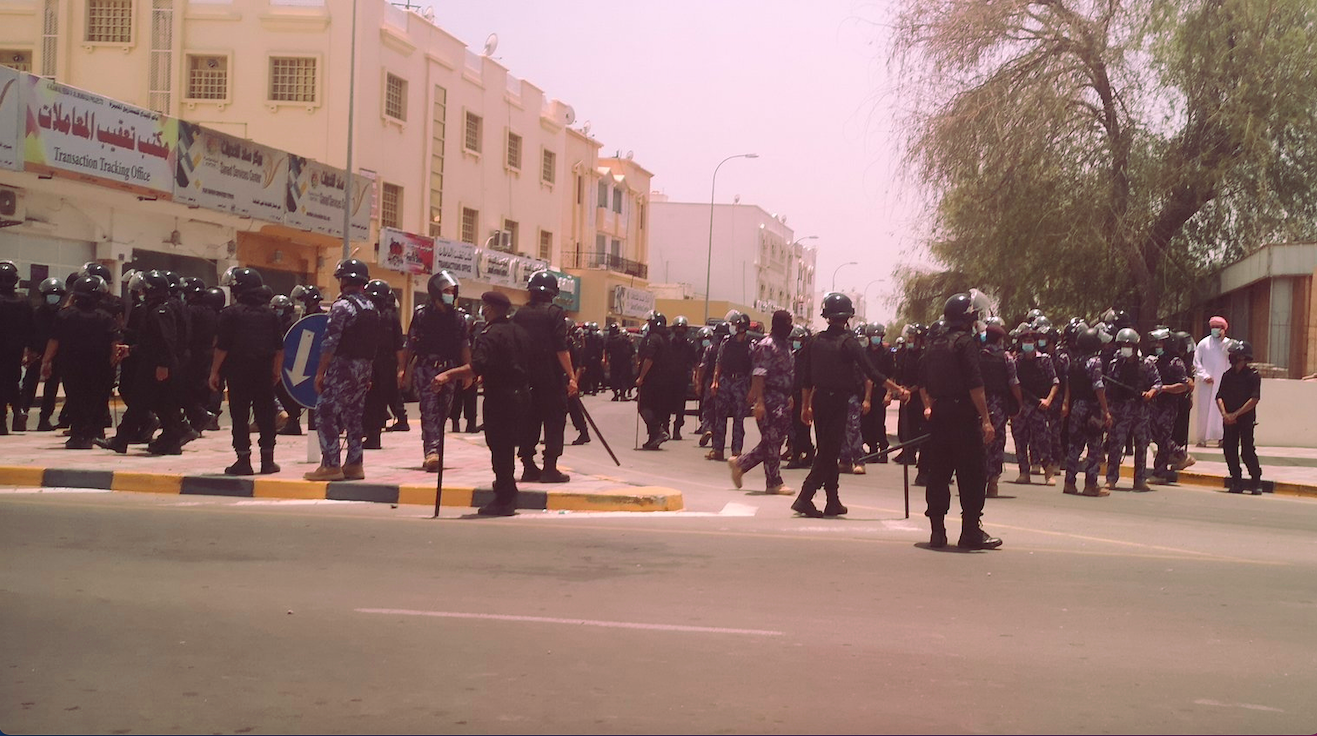 THE Police Service of Northern Ireland (PSNI) provided ‘public order’ training to police in Oman in the lead-up to the country's recent suppression of protests.

Amnesty International has called for a “rigorous, independent human rights assessment”, as the PSNI faces fresh scrutiny over its long-standing public order and security training of Omani police.

In recent weeks in Oman, thousands have protested against unemployment and corruption – in what have been described as the largest demonstrations the authoritarian Gulf state has seen since the 2011 Arab Spring.

The PSNI confirmed that it provided public order training to Oman from December 2020 until February 2021, months before the protests were put down, a joint investigation by The Detail and Declassified UK has found. The PSNI’s relationship with Oman's police force goes back to 2014.

Nabhan al-Hanashi, a political activist in exile who runs the Omani Centre for Human Rights, told us the Omani police response to protesting citizens can be “very extreme”, particularly if they call for a change of the regime in the country.

He also said that the British Government has “always protected the regime in Oman” and that “for some reason in the UK, nobody is hearing us”.

Director of Amnesty International in Northern Ireland, Patrick Corrigan, said there are “important questions” about the PSNI’s role in Oman.

He told us: “According to the PSNI, these training programmes were supposed to help ensure human rights-compliant public order policing in Oman, yet the Omani authorities are continuing to unduly restrict free expression, arresting and prosecuting journalists and online activists.”

Meanwhile, policing spokesperson for the Social, Democratic and Labour Party (SDLP), Dolores Kelly, believes the actions of Omani security services against the protesters are “deeply concerning” and “entirely disproportionate”.

Ms Kelly, who sits on the Northern Ireland Policing Board, said: "I have asked the police for an update on the training offered to security agencies in Oman, the weight given to human rights compliant policing and how the PSNI measures the effectiveness of the training it delivers."

"How to deal with protesters"

NI-CO is a not for profit, public body owned by Invest NI, which in turn is a non-departmental public body under the responsibility of the Department for the Economy (DfE).

The DfE has previously said that “NI-CO’s purpose is to market, sell and share the distinct expertise and knowledge of Northern Ireland Government departments and public bodies developed as a result of our unique history and experience”.

Several PSNI training projects organised by NI-CO have in the past also come under scrutiny, including in Bahrain, Qatar and Libya.

Discussions regarding PSNI training of Omani police began in 2014, when the then British Ambassador to Oman wrote to the PSNI “requesting assistance to provide policing advice and guidance to Omani policing service”.

Documents we uncovered using Freedom of Information (FoI) legislation show approval was given in late 2014, to further the relationship with Oman.

The go-ahead was given by then Deputy Chief Constable of the PSNI and now Garda chief, Drew Harris.

A scoping visit to Oman was then carried out in early 2015 by two officers from the PSNI’s training college.

The British Ambassador wrote to the PSNI at the time, saying that the main objective of this was for Oman’s police to “learn how to deal with protesters” using the most recent tactics and techniques in public order policing.

The PSNI received £900,000 to cover the costs of its work in Oman between March 2014 and March 2017 alone, for projects including protest training and youth justice initiatives.

PSNI officers have visited Oman, and Omani police have come to Northern Ireland on several occasions.

Training operations have been ongoing since then, as recently as earlier this year. Four PSNI officers delivered eight days’ virtual public order and public safety training to the Royal Oman Police between December 2020 and February 2021. 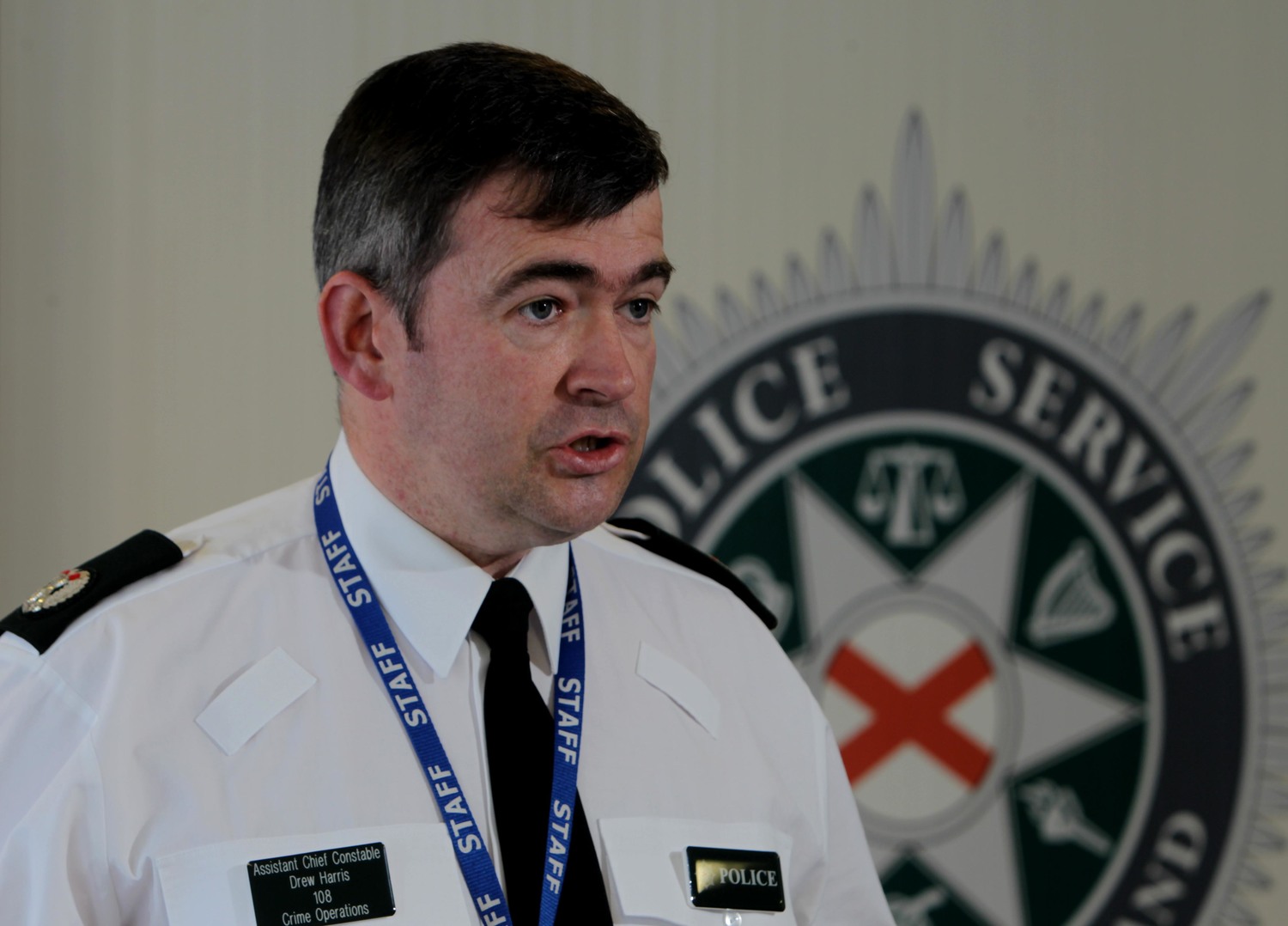 "Northern Ireland pulled out all of the stops"

Meanwhile, officials from the Royal Office of Oman visited Northern Ireland on five occasions in a 12-month-period in 2014/2015.

One meeting took place at the Merchant Hotel in Belfast in 2015, between Oman’s police chief Hassan al Shraiqi and a Northern Ireland delegation, including Arlene Foster, then the minister responsible for trade and investment.

A NI-CO document relating to the meeting states "it may be beneficial to look at other aspects of policing where there is NI expertise”, including intelligence gathering.

The PSNI did not respond when asked if it provided intelligence-based police training in Oman.

The same discussion points for the dinner also state “that the Minister (Arlene Foster) is keen to discuss the Northern Ireland Government’s strategic plan to move from a public-sector led economy to one that is private-sector led".

An email from the British Embassy in Oman to NI-CO in March 2015, said that the Northern Ireland delegation "pull out all of the stops", and mentions how the dinner "whet the appetite" for broader cooperation with Oman and Northern Ireland, particularly with Invest NI.

Figures released to The Detail from the DfE show that exports from Northern Ireland to Oman have averaged around just under £10m per year in recent years.

While these exports have not grown since the relationship started, the Gulf state remains a strategic ally to the UK in the Middle East.

Oman, a former British colony, has reportedly also ordered over £3bn worth of weapons from the UK since 2007, according to research from Campaign Against Arms Trade.

In addition, junior UK Minister for the Armed Forces, James Heappey, last week confirmed that there are approximately 230 UK military personnel based in Oman and that they have “regular contact with the Omani authorities...to share ideas and experience on all aspects of security including response to protests”.

The PSNI told us that the delivery of the public order training to Oman has been supported by the Northern Ireland Policing Board (NIPB) and the Department of Justice (DoJ), with both organisations approving of this as recently as November 2020.

However, none of the PSNI, DoJ or NIPB provided us with evidence about how the PSNI training has improved human rights-compliance in policing in the Gulf state.

We asked the NIPB and the DoJ, given their approval, whether they were content with these PSNI training operations in Oman, in light of the recent suppression of protests. However, neither answered this question.

The DoJ said it had been advised that all upcoming “policing assistance” provided to Oman would be assessed under UK Government human rights guidance, but maintained it had “no role in evaluating the impact of training provided by the PSNI”.

Meanwhile, the NIPB confirmed that it sought and received assurances from the PSNI about the nature of the Omani police training, at a board resource committee meeting last November.

However, the details of these assurances are not included in the board minutes and have not been made publicly available.

Amnesty International’s Patrick Corrigan said: “The Chief Constable and the Policing Board can’t just rubber-stamp requests for the PSNI to deliver public order and firearms training to security forces from countries with a record of suppressing freedom of assembly and expression.

“The PSNI should carry out follow-up evaluation to ensure that any training offered results in an improvement in human rights and policing in that country, especially as there are considerable ongoing human rights concerns about policing in Oman.

Mr Corrigan also said that police and security training “should be subject to the same level of regulation as the sale of arms and security equipment” and approval should be refused if it risks “facilitating human rights abuses”.

He added: “A rigorous, independent human rights assessment should be made before any future agreement to deliver PSNI training to an overseas police force.”

A spokesperson also said: “Our work in Oman is human rights centred and is delivered in a way to ensure an understanding of the roles and responsibilities of all involved. Our focus is always on the delivery of the highest standards of policing strategy and tactics.”

NI-CO also maintained that all of the PSNI’s training in Oman has been “fully compliant with international human rights standards” and added that this Foreign, Commonwealth and Development Office (FCDO)-funded work “strives to promote not repress democracy and equality”.

A FCDO spokesperson told us: “The FCDO remains committed to the promotion of universal freedoms and human rights. We continue to monitor developments on human rights in Oman, drawing on a range of information. “

We contacted the Oman Embassy in the UK but it did not provide a response.