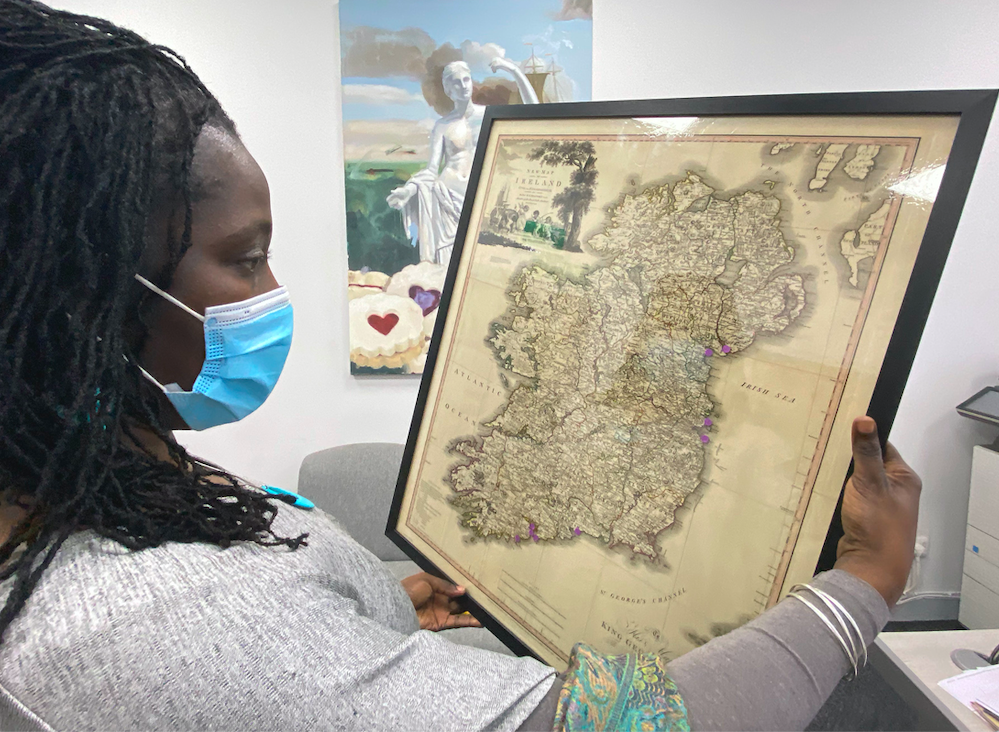 Marsha Deans of ACSONI with a map from an exhibition on the slave trade.

MEMBERS of Northern Ireland's African and Caribbean community have criticised the Stormont Executive for failing to progress plans to acknowledge racial inequality.

It comes after the African Caribbean Support Organisation Northern Ireland (ACSONI) called on the government to fulfil its commitment to mark the United Nations (UN) International Decade for People of African Descent (2015-2024).

The UN initiative aims to highlight racism and racial discrimination faced by the victims of the transatlantic slave trade and colonialism. However, Stormont has yet to outline how it plans to observe the decade.

The Detail has partnered with Belfast Media Group to produce a series of articles examining historical connections between some of our local institutions and slavery.

According to University College London’s Legacies of British Slave-ownership database, 107 people living in Ireland were compensated for the losses they incurred after slavery was banned in the British empire in 1833. It is believed, this group of slave-owners possessed around 16,000 slaves.

The database also lists 21 addresses in what is now Northern Ireland with links to the slave trade.

Marsha Deans, who coordinates the ACSONI Links and Legacy Project, told us there is a reluctance to discuss slavery as people are “ashamed of their history”.

She said previous generations of Irish people have “buried their input into slavery”, adding that the government doesn’t "even want to talk about this".

Raquel McKee, from the ACSONI Links and Legacy Project, said the black community is “struggling” for government recognition of the UN International Decade for People of African Descent.

“As one of the regions involved (in slavery), Northern Ireland has not yet done anything about it,” she said.

“Up to now, with just three years left of a 10-year-period, nothing has been done about it.”

Last year, the head of the Equality Commission hit out at a lack of progress on the Stormont Executive’s Racial Equality Strategy, which has been in place since 2015 and has just four more years to run.

As part of its strategy, The Executive Office has set up a Racial Equality Subgroup “to provide a strong voice advising on issues affecting minority ethnic people, migrants and race relations".

An Executive Office spokesperson said a previous meeting of the subgroup “focused on the UN Decade of People of African Descent” and included a presentation from ACSONI.

The Executive said it had planned a “further engagement” between ACSONI and civil service 'Racial Equality Champions' to “help to inform any plans for departments to progress how UN Decade of People of African Descent is observed”.

The meeting, which was scheduled for the end of March, has yet to take place.

According to the UN, studies by international and national bodies show that people of African descent “have limited access to quality education, health services, housing and social security".

They also face “discrimination in their access to justice, and face alarmingly high rates of police violence, together with racial profiling".

In order to address institutional and societal racism, as well as racial inequality, ACSONI’s Raquel McKee said there must be “reparations” for the transatlantic slave trade.

“Reparations is talking about repair – that’s the idea,” she said. “Damage has been done; the damage needs to be repaired. Now, in order to repair the damage those who have been wronged need to be addressed and their situation improved.”

Marsha Deans insists that education about the history and legacy of slavery is a key aspect of these reparations. “History is there, and history is ugly, but there is so much good that can come out of it,” she said. “Educate the people and let them realise that the colour of your skin means nothing.”