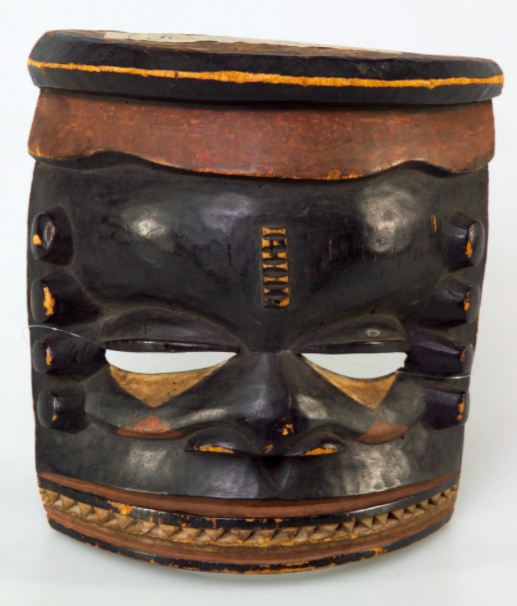 This Ekpo mask from west Africa, believed to date from the early 20th century, is part of the Ulster Museum's World Cultures collection.

NATIONAL MUSEUMS NI says it holds 4,500 objects, 800 of them from Africa, in its ‘World Cultures’ collection but has no plans to repatriate any to their countries of origin.

While National Museums NI has been involved in discussions around the restitution of African objects since the summer of 2020, a spokesperson said there is “no guarantee” it will repatriate these items.

However, National Museums NI – which is a statutory agency responsible for Northern Ireland museums – also said this is subject to change as its “decolonisation collaborations mature over time”.

Meanwhile, a representative from one of Northern Ireland’s leading African and Caribbean organisations has called on National Museums NI to expedite the repatriation of objects which have been “stolen” from overseas.

The Detail has partnered with the Belfast Media Group to produce a series of articles examining historical connections between some of our local institutions and slavery, and colonialism.

We previously reported on how Queen’s University Belfast is examining the background of the institution’s historical benefactors, to establish whether they had any links to slavery and how the Stormont Executive was criticised for failing to progress plans to acknowledge racial inequality.

National Museums NI told us it’s participating in the ‘Devolving Restitution: African Collections in UK Museums Beyond London’ project, which launched in December 2020.

We were told this project aims to not only “move forward the traditionally London-centric nature of debates about decolonisation and restitution in UK museums, but also to actively support and amplify the claims of African-based organisations and communities for the return of African heritage”.

Two months after the official launch of this project, National Museums NI reached out to the Belfast-based African and Caribbean Support Organisation Northern Ireland (ACSONI) to discuss the potential repatriation of artefacts in its collections.

While National Museums NI said it remains “willing and open to discussing repatriation in both a general sense and in terms of specific objects”, it said the process is “complex and developed through dialogue”.

ACSONI’s Raquel McKee, who is set to take part in discussions with National Museums NI, said that while the repatriation of artefacts will require a “process”, items known to be “stolen” should be returned to their country of origin without delay.

“If they know what they have is stolen then there should be no issue about returning those things,” she said.

“If they know that it needs to be repatriated, if there is no question mark about it, then why delay?

“What would be the benefit of waiting apart from potentially earning more from it?”

In January 2021, it was reported that a working-group from National Museums Ireland was looking at items which may have a colonial past, with a view to potentially repatriate such objects.

Last month, it was reported that the University of Aberdeen was set to repatriate a sculpture to Nigeria, which had been looted by British soldiers in 1897.

National Museums NI has previously repatriated some items in its collections, including a Maori head to New Zealand.

The organisation also told us it’s engaged in discussions with the Australian Institute of Aboriginal and Torres Strait Islander Studies and is “exploring repatriation and decolonisation more broadly with them”.

In addition, National Museums NI has joined the Digital Benin project which aims to “bring together object data and related documentation material from collections worldwide and provide the long-requested overview of the royal artworks looted in the 19th century”.

National Museums NI has three spears recorded as being taken from Benin. 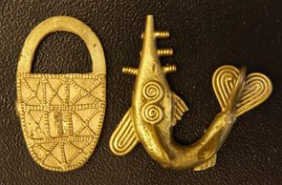 Brass weights from west Africa which are part of the Ulster Museum's World Cultures collection.

There are around 4,500 objects in National Museums NI’s World Cultures collection, linked to the Ulster Museum.

When much of this material came here, it was retained by the Belfast Natural History and Philosophical Society which predated the formal foundation of the Ulster Museum.

About 800 items in the World Cultures collection originate from Africa in the 19th and early 20th centuries, when the British Empire had a significant colonial presence on much of the continent.

The World Cultures collection also includes items from Asia, the Americas and Oceania – all of which Britain colonised to varying degrees.

Although around 4,500 objects make-up the World Cultures collection, this is not a comprehensive list of all items which it has from around the globe.

Despite being asked, National Museums NI could not provide us with a comprehensive list of such objects.

An National Museums NI spokesperson said: “We are a museum with an international outlook and reputation, and as such we represent the world across our collections of art, history and natural sciences.”

In addition, National Museums NI said that the Ulster Museum’s objects which are not on either “permanent or temporary display” are in a “secure off-site store” or out on loan to “other publicly accessible institutions”.

The agency said it collects objects “through purchase, donation, bequest and fieldwork”.

However, Ms McKee said questions still loom over its “staggering” collection of objects.

Ms McKee insists countries whose own museums have “lost out” due to the sale of their native artefacts also have a legitimate claim to repatriation.

“If the collection that country has to represent that era of its history is deficient then I would certainly say that a case for repatriation is valid,” she added.

National Museums NI’s website states it has a “decolonisation agenda”, but added: “It is not possible to confirm exactly when museums began discussing decolonisation, but the issue has gained considerable momentum within the last two/three years.

“The decolonisation statement was added to nmni.com in February 2021.”

This is the same month that The Detail and Belfast Media Group first contacted National Museums NI regarding issues raised in this article.

However, National Museums NI maintained that media scrutiny is not what has driven its “decolonisation agenda”.

National Museums NI added: “We recognise that whilst repatriation often dominates debates about the decolonisation of museums, it is just one form of decolonisation.

“We can and should enact a decolonisation approach in our research, documentation, community engagement, interpretation and collecting.

“In terms of collecting we have made a number of important acquisitions in recent years.

“These include anti-slavery ceramics, some featuring Olaudah Equiano, the writer and abolitionist campaigner who spent time in Belfast in the 1790s.”

National Museums NI also referenced an art collection it has recently purchased called Riots, by African-American artist Troy Michie, “the subject of which is the 1943 zoot-suit racially motivated riots in the United States” and that it’s also in the process of collecting “Black Lives Matter placards and testimonies from participants in Belfast’s Black Lives Matter protests in 2020”.

Ms McKee said while National Museums NI deserved “credit” for its decolonisation agenda, museum curators should have “a clear sense of when repatriation needs to take place”.

“I have often felt that Northern Ireland has the potential to lead in terms of attitudes and progression both for the United Kingdom and Ireland because of where we are positioned,” she said.

“I’m looking forward to further conversations about it.”