What does post-Brexit membership of the World Trade Organisation mean for Northern Ireland? 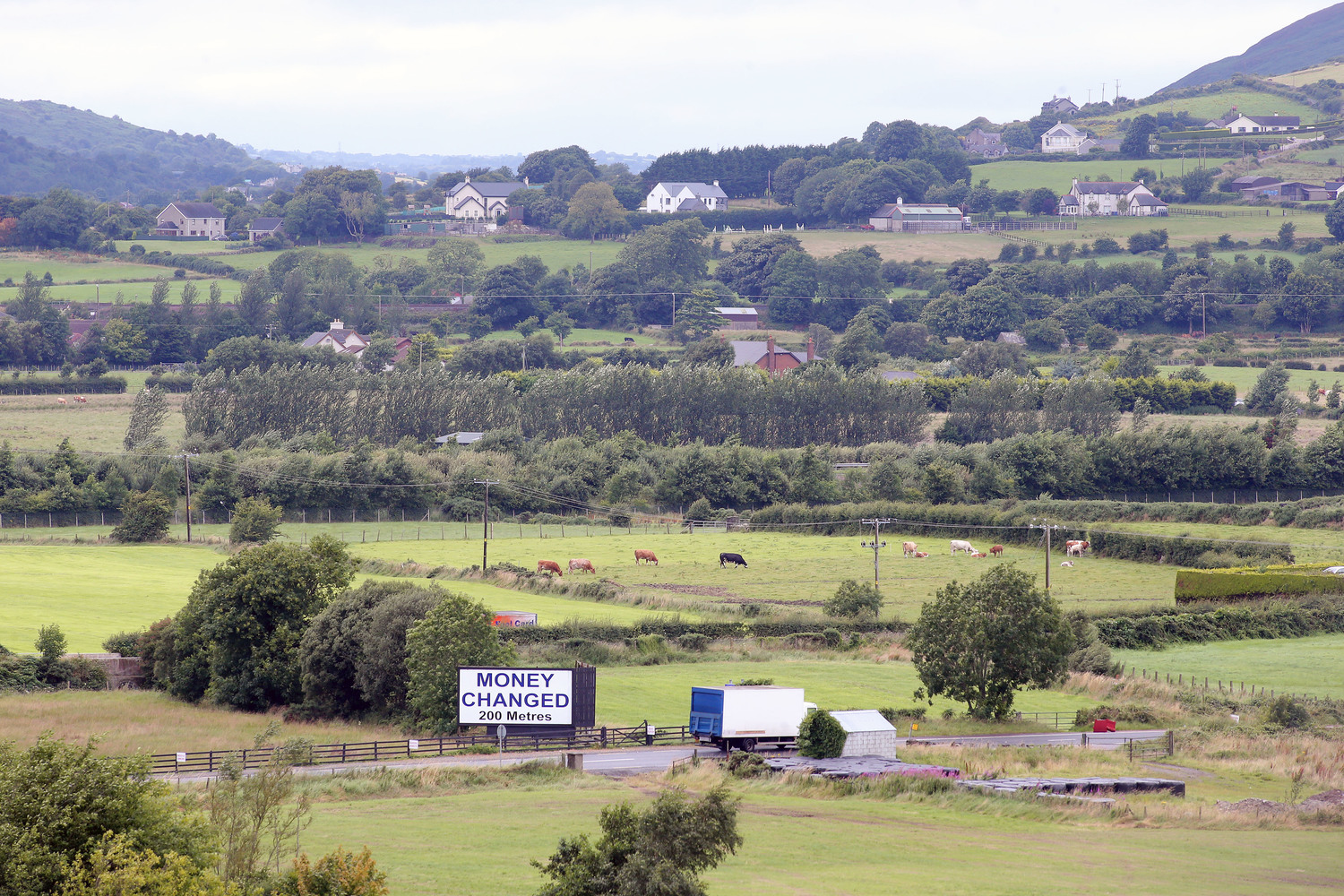 The Republic of Ireland border with Northern Ireland on the old Dublin Road between Newry and Dundalk: Press Eye

A RECENT television debate featured leading Brexiteer Iain Duncan-Smith explaining how a hard Brexit and the adoption of World Trade Organisation (WTO) rules will not require “a fixed border” in Ireland. Next to him, the former head of the World Trade Organisation, Pascal Lamy, entertainingly moved his forefinger around his head, to indicate how lacking in sanity the explanation was.

One of most irritating features of the Brexit debate is the willingness and assertiveness with which people speak about the WTO rules without, apparently, taking the trouble to read them. In fact, it is not difficult to access the WTO principles, which can be accessed here.

The question of WTO rules has become much more relevant given the resignation of Theresa May as leader of the Conservative Party, which means we will soon have a new prime minister. With Nigel Farage’s new Brexit Party annihilating the Conservatives in the European Parliament elections, it is likely the next prime minister will favour a no deal outcome to Brexit. And that means trading on WTO rules, at least initially.

The UK is already a member of the WTO – it joined in 1995, when the WTO was formed as the body that replaced the General Agreement on Tariffs and Trade (GATT). GATT was itself established in 1948 as the basis for promoting fair and open international trade. The WTO shares those objectives, while also being the mechanism for resolving trade disputes between nations. It does this by providing the legal rules of international trade. However, the WTO also supports trade barriers where these are reasonable and appropriate – for example, in the prevention of transmission of disease and for the protection of consumer safety.

As a member of the EU, the UK had been represented at the WTO by the EU. The UK will continue its membership of the WTO post-Brexit as an independent member. Earlier this year the WTO recognised that the UK will be an independent member of the government procurement agreement when it leaves the EU, giving the country access to the global market for public tenders. The UK is one of the largest players in this world market. 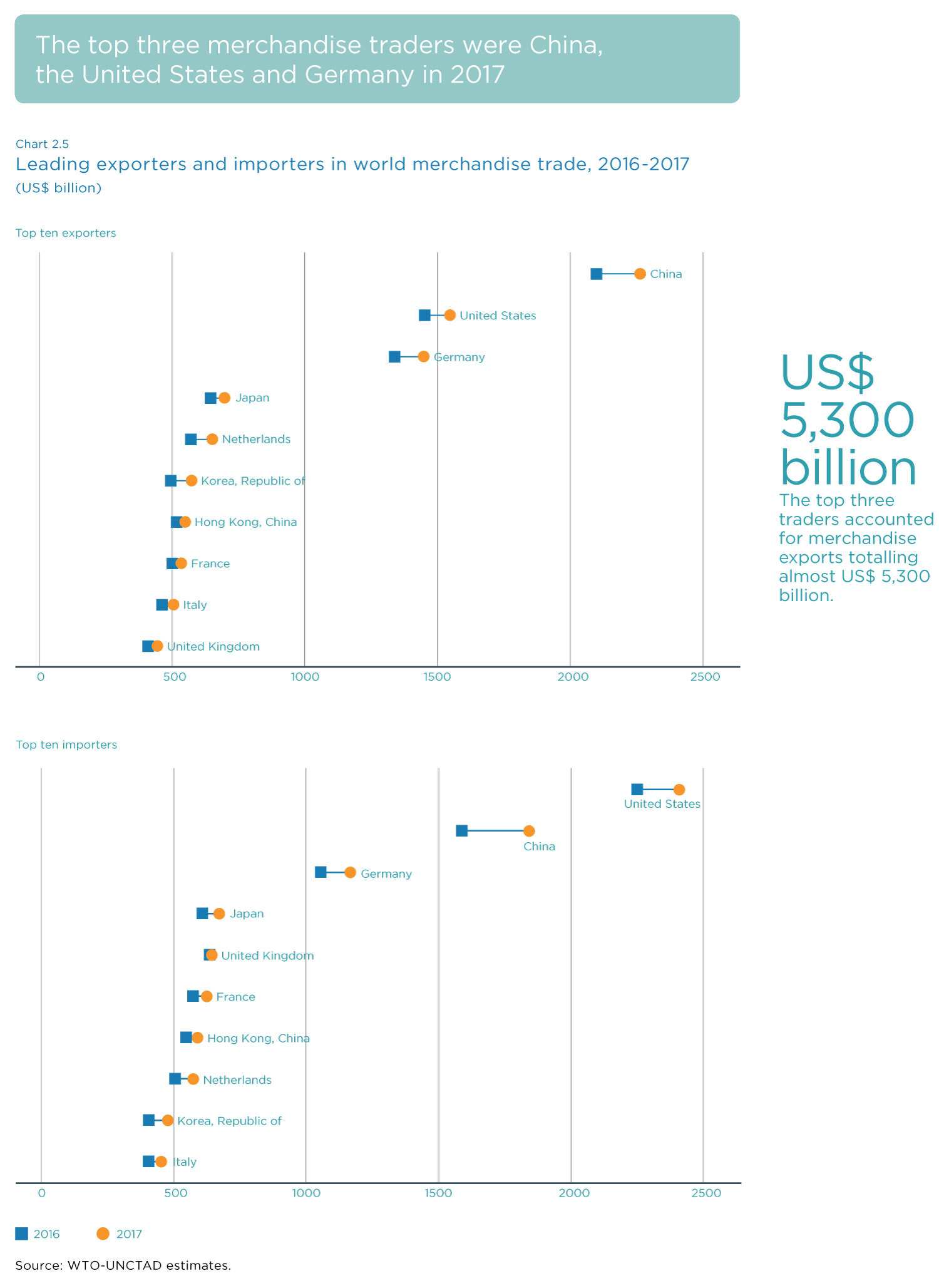 In January, a spokesman for the European Commission commented that it was “pretty obvious” that without a Brexit deal, there would be a return to a hard border in Ireland. However, Brexiteers have argued the European Commission should rule this out as an option. Yet it is not just the rules of the Single Market and Customs Union that mean some type of controlled border will be required without a Brexit deal. The WTO rules also provide a framework.

Without a free trade agreement in place after Brexit, the UK would trade with all countries, including Ireland and other EU nations, on WTO terms. WTO rules apply where economically advanced nations do not have free trade agreements with each other.

Under WTO rules, without a free trade agreement with the UK, the EU would have to apply the same tariffs and customs checks on UK goods as on those from other countries outside the EU, such as the US or China, with which it also does not have a free trade agreement. Under WTO law the goods of all members of the WTO must be treated equally – this is called the ‘Most Favoured Nation’ obligation.

The UK government has announced that it would initially avoid imposing tariffs on most goods entering the UK post-Brexit, if there is no deal. This is intended to prevent consumer costs rising substantially. However, it might seriously damage many UK producers, who would be undercut on some items by imports produced globally at lower cost, while facing new tariffs on their exports – potentially making them uncompetitive in both domestic and export markets.

The UK government added that it will not introduce any new checks on controls on the land border between Northern Ireland and Ireland – and the new tariffs on imports would not be imposed on items imported into Northern Ireland from Ireland. This would seem to infer new checks would be needed on goods crossing the Irish Sea from Northern Ireland to Great Britain.

Some agri-food production would be particularly affected by the new tariffs. Many food imports coming into Great Britain would become more expensive. Imported beef would attract a tariff of 7% and new tariffs would also be applied on cheddar cheese, butter and some fish. Irish farmers would be the most affected by these higher costs for their produce in Great Britain.

Imported cars could be 10% more expensive and undergarments 12% more costly. But, it should be stressed, those tariffs potentially apply to Great Britain and not to items imported to Northern Ireland from Ireland.

UK exports would be subject to EU tariffs, which vary according to the type of goods. Tariffs on cars and car parts are 10%. UK manufactured cars would potentially become less competitive within the EU and in those countries where the UK currently benefits from an EU free trade agreement.

However, some economists argue that the impact of tariffs would in practice have a different impact – it would lead to a reduction in the value of sterling that would eliminate the cost of tariffs. (See the tweets of Jonathan Portes.) This would mean the UK’s trade balance with the rest of the world would not be greatly affected, but it would affect the competiveness and viability of different sectors. (The agri-food sector would be particularly vulnerable.) 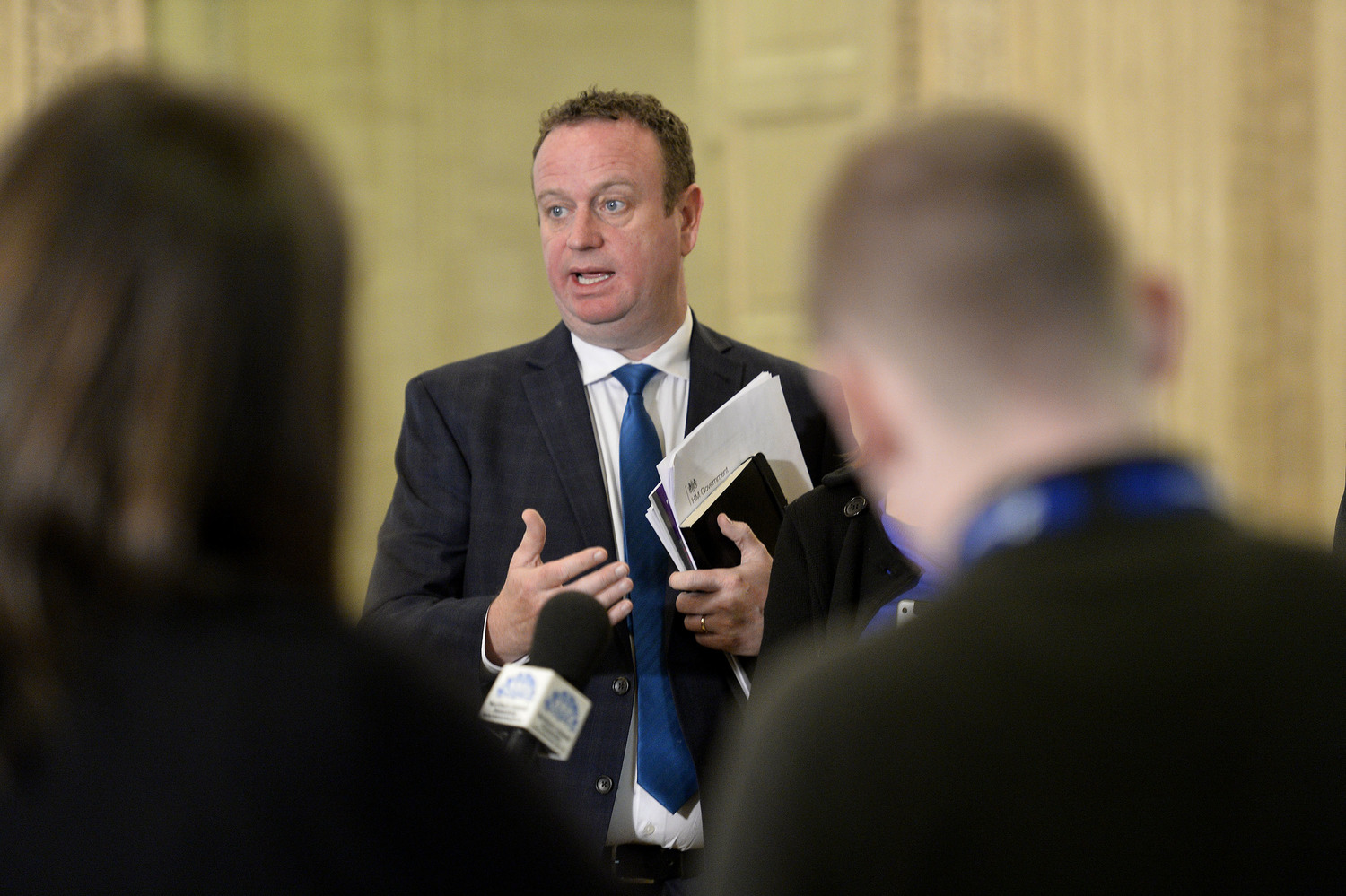 There is a consensus across Northern Ireland’s business representative bodies that they oppose the possible move to trading on WTO terms. Stephen Kelly, chief executive of Manufacturing NI, argues that Northern Ireland needs to remain closely aligned with trade across the EU.

“For our members, we need to stay in the Customs Union and we need to stay in the Single Market,” he says. Leaving the EU without a deal would be “really, really difficult”, adds Kelly. “It would add huge amounts of additional cost and complexity. In a part of the economy that is so sensitive to cost, that is potentially existential for many firms.”

In a Manufacturing NI survey, 94.4% of members supported the Withdrawal Agreement negotiated by Theresa May, as it kept open supply chains and their routes to market. “A year ago, 21% of manufacturers felt that Brexit could be a success: that is down to just 4% now,” explains Kelly.

Non-tariff barriers – customs controls and regulatory requirements – are typically a bigger cost than tariffs. WTO rules do not specifically require hard borders to enforce these. The bad news is that WTO rules do require countries to treat each other on an equal basis. So if Ireland inspects goods coming in from China by plane, for example, it should do the same with goods coming in from the UK by road.

The upshot is that the issue of the border is pretty well identical whether it is addressed according to the requirements of the European Union’s Customs Union and Single Market, or under WTO rules. Where there is some leeway in WTO rules is in the location of the border. One of the exemptions provided under WTO rules relates to security concerns. It permits considerations on the basis of “essential security considerations”. This might assist controls to be undertaken away from the border, perhaps at the Irish Sea.

Hauliers are particularly concerned about the potential impact of controlled borders in Ireland. Seamus Leheny‏ of Freight NI explains: “A ‘no deal’ brexit resulting in NI businesses trading under WTO would be hugely damaging for our members in NI. Supply chains between NI and RoI are highly integrated, 70% of freight from RoI to NI is classed as intermediate goods - these are the ingredients and components we use to make the ‘made in NI’ goods we sell elsewhere. Tariffs under WTO will make these goods more expensive to make and therefore less competitive. 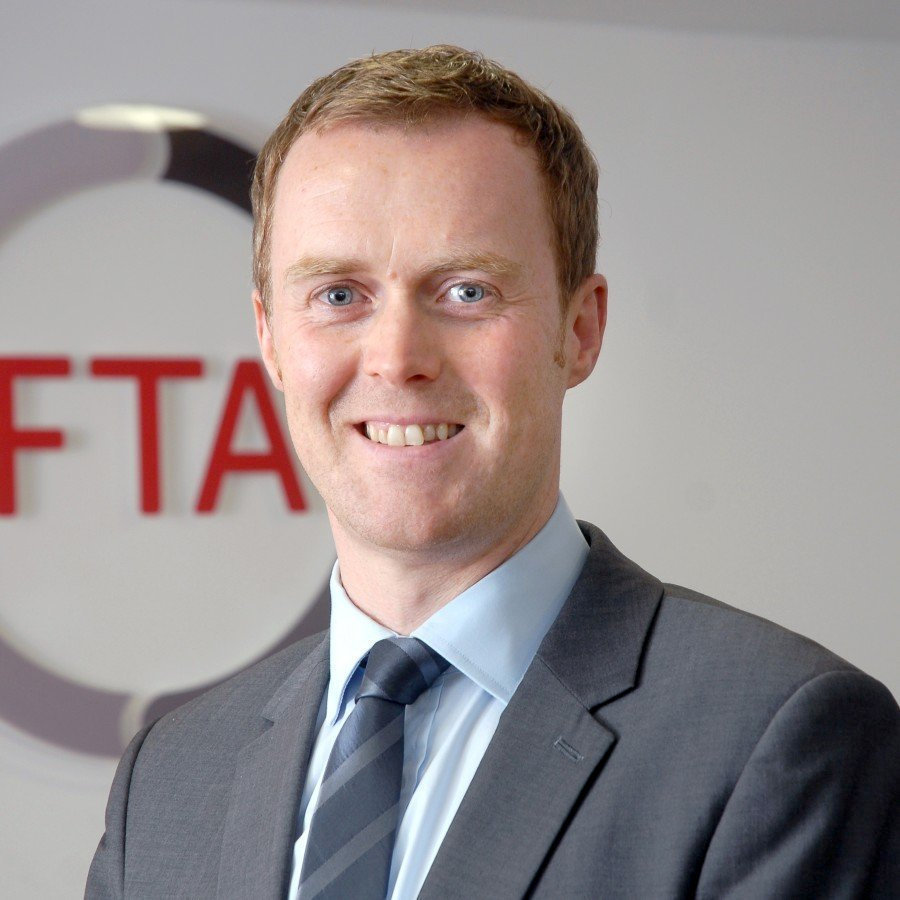 “Similarly 60% of NI exports to RoI are intermediate goods, costly tariffs will deter RoI businesses sourcing goods from NI or lead to NI businesses moving across the border. These scenarios all result in less industrial output in NI therefore less goods moving and reduced volumes for logistics providers. This is why not just the FTA [Freight Trade Association] but all business organisations in NI united in saying we need a deal with the EU.”

One complicating factor is that the WTO is not very effective in resolving disputes – it can take years. Last year 22 WTO members initiated 38 disputes – the highest since 1998. So if the EU did decide not to control its borders with the UK, it would probably take a long time before any legal complaint brought by another country was settled.

But would the EU choose to ignore WTO rules on border controls? While the EU might be willing to move slowly in adopting fully controlled borders, those borders would surely come into place at some time. The evidence against relying on WTO rules seems compelling.

The CBI in Northern Ireland has published a detailed briefing paper, warning of the impact of leaving the EU without a deal and trading on WTO terms on businesses here and the economy. Among its concerns are that “WTO rules alone would not provide the legal basis to export services to the EU”, that many businesses might relocate into the EU and that Northern Ireland could suffer a lost decade of productivity growth. 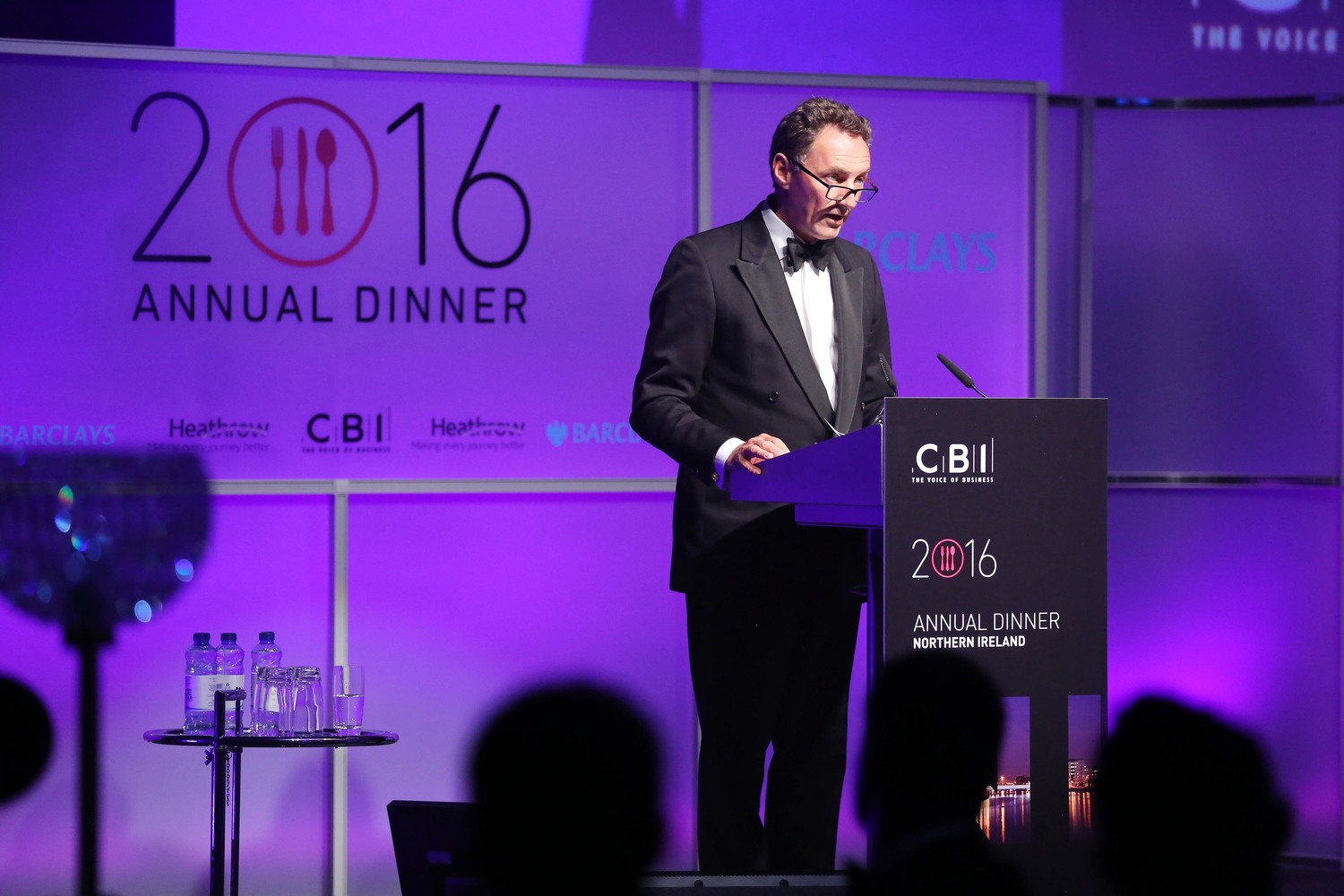 He says: “Businesses here are already facing a myriad of challenges; the prospect of being jolted into operating under WTO rules will at best for almost all businesses be very trying but at worst, for some, it will be catastrophic.

"At this stage it is not possible to assess the full economic social and environmental damage that this could bring to the fabric of our community but undoubtedly it will be very damaging and may take a decade or longer to recover. But, perhaps above all, it has the potential to undermine the foundation stones of peace and increasing prosperity laid down by the 1998 Good Friday/Belfast Agreement, with all the potential repercussions that this could entail across these two islands.” 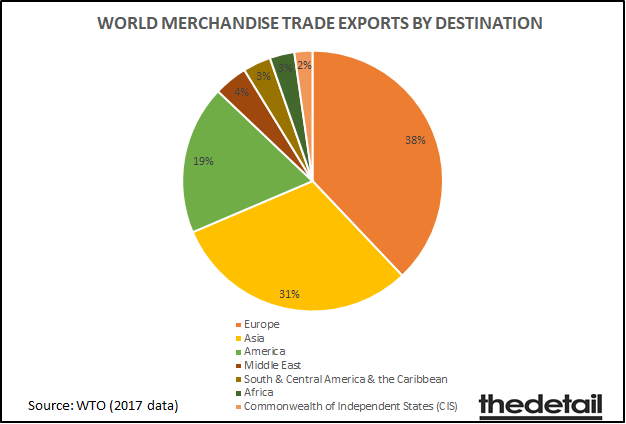 It has been frequently claimed by Brexiteers that most, or many countries rely on WTO rules for trade. This is partially true. But countries also enter a range of bilateral agreements. Commentator James Hardy undertook an analysis of world trade arrangements and concluded that no country trades solely on WTO terms – all have additional multi-lateral or bilateral agreements.