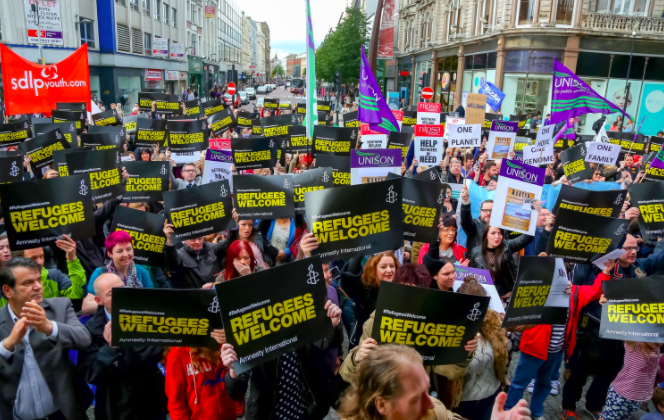 Rally for refugees in Belfast. Photo by Press Eye.

One of Northern Ireland’s largest trade unions has asked the Department of Health (DoH) to do “everything in its power” to allow medically qualified asylum seekers and refugees to work during the pandemic.

The Detail has seen a joint letter signed by UNISON NI regional secretary Patricia McKeown, alongside human rights organisations Participation and Practice of Rights (PPR) and the Committee on the Administration of Justice (CAJ).

The groups say that there are many medically qualified migrants living in Northern Ireland who have been unable to answer the NHS call for more workers.

The Chief Medical Officer said last month that Northern Ireland’s health service faces "extreme pressures", while managers at the Western Trust have called for all off-duty staff to return to work immediately.

Asylum seekers are denied the right to work by the Home Office in almost every case. Refugees and others have the right to work, but face a lack of support in converting degrees and the other steps necessary to practice here.

Osamah Al-Haddad is a doctor originally from Iraq, now seeking asylum in Belfast.

He said he wanted to be a doctor since he was in primary school, when his father – also a doctor – saved a classmate’s life after being injured on a school trip.

Mr Al-Haddad grew up to follow in his father’s footsteps, going to medical school in Baghdad before working in rural areas along the Iraq/Iran border, which often had limited medical facilities.

He later served three tours as an army doctor, including in Al-Anbar and Samarrah which were, at the time, besieged by ISIL.

Mr Al-Haddad is currently taking exams necessary to practice in Northern Ireland. However, even once these are finished, he will not be able to work.

While in theory someone can be granted permission to work in limited circumstances, the Home Office has effectively banned asylum seekers from working since the early 2000s.

A spokesperson for the Home Office said: “Medically-qualified asylum seekers can currently apply to work for the NHS in the many important medical roles included on the Shortage Occupation List if they have been waiting 12 months or more for a decision on their claim, through no fault of their own.”

However, as cited in a recent House of Commons briefing paper on the subject, the current policy is seen as only providing an “illusory” right to work for most asylum seekers.

The Home Office did not provide requested figures on how many people have been successful in gaining permission to work. The department routinely refuses such information requests, citing cost grounds.

“It is a very difficult situation, to be honest”, Mr Al-Haddad said of not being able to work. “It’s difficult for me and difficult for my family. They see me just sitting around without doing anything.”

Mr Al-Haddad is calling for a change in the law.

“It would make a huge change, if they allowed us to work,” he said. “It would help me from a psychological standpoint. To do something that is good for me and good for the community. Even if not as a doctor, I’ll do any job to help the community, during this pandemic, during this difficult time.”

Even volunteering is difficult, he says. He answered a call from the NHS to help administer the vaccine, but said they couldn’t accept his offer as he wasn’t registered. 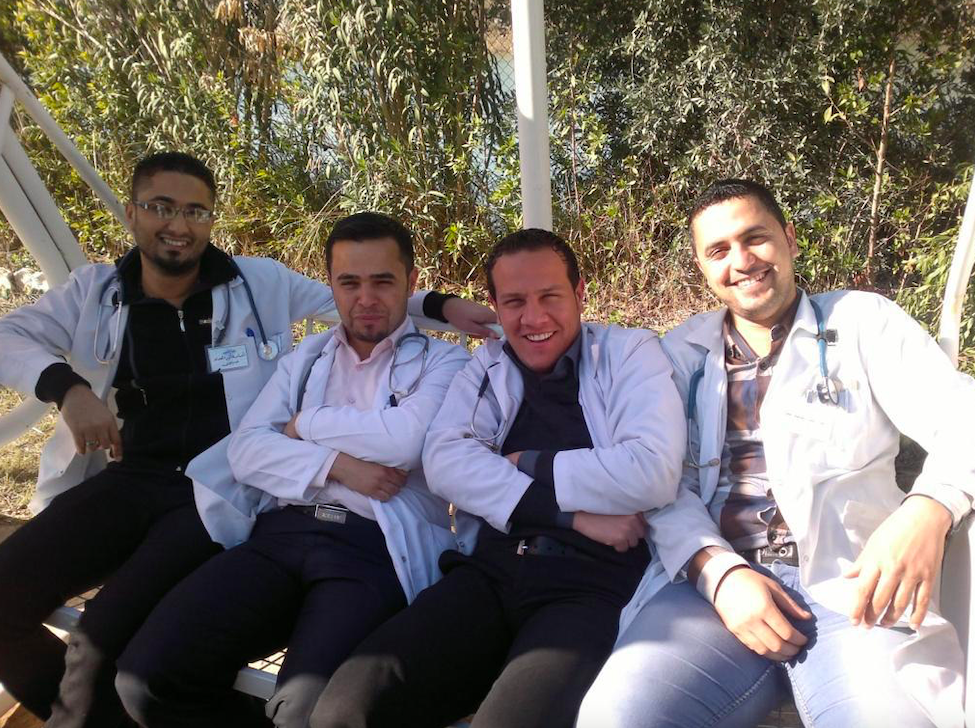 'Farah' is another doctor in Northern Ireland seeking asylum. She has recently started volunteering four days a week within the NHS but says the process to get started was long and difficult. “It took six months to get a place. It’s very complicated and not easy”, she said.

While asylum seekers are effectively banned from working across the UK, they are allowed to volunteer. However, Farah says volunteering is often easier in Britain due to a wider range of support there.

“I think it’s very slow here (in Northern Ireland) because people are not used to asylum seekers and their situations, but if you go to Leicester, Manchester, it’s very common to see refugees and asylum seekers volunteering in hospitals."

In Northern Ireland, there is “not that much support for asylum seekers in general and medics in particular”.

Nor does the lack of support only affect asylum seekers. Many refugees have moved to England and elsewhere in Britain, campaigners say, because there is a better support system for those wishing to convert qualifications or seeking placements.

Patricia McKeown, regional secretary for UNISON NI, said barring people from working hurts the NHS but is also a breach of their “fundamental human rights".

“As part of UNISON's support programme we have been working with refugees and asylum seekers who are qualified doctors, nurses and health professionals but are debarred from working because of restrictive immigration rules.

“We have been in conversations with the Department of Health for two or three years now, asking them to find ways of working out how they get them the right to work, issues around recognition of qualifications.

“We have talent here, being denied the right to work, people we need inside the health service, (and) simply because of their status as asylum seekers they are being barred. As far as we are concerned that is just a breach of fundamental human rights.”

Natalie Donnelly, a UNISON organiser, coordinates a professional-level English class for refugees and asylum seekers. She said they worked with a group of 50 refugee doctors in recent years, mainly from Sudan, who were eager for support to be able to practice here. While meetings were held with the DoH, the support did not materialise, and 47 of then have now moved to Britain.

"It's a real shame that doctors who wanted to live and work in Northern Ireland have had to move to England because they couldn’t get the support they needed here”, she said.

Campaigners have noted that while immigration control is not a devolved matter in Northern Ireland, many other areas such as healthcare and employment rights are.

Úna Boyd, the immigration project solicitor & coordinator at CAJ, said that the policies preventing people from working “are ill thought out at the best of times, but when our healthcare services are under overwhelming pressure in a pandemic, to refuse offers of help from qualified, experienced medical practitioners is nonsensical".

“For too long Stormont has permitted discriminatory Home Office policies to be applied in devolved areas with little challenge. We need push back here, as has happened in Scotland and Wales, to create specific, tailored solutions for NI”, she said.

The letter seen by The Detail sent to Minister Swann cites examples in Europe and the US where authorities have allowed migrant doctors to work in their health systems.

“In light of this (current) situation, we call on Northern Ireland authorities to follow the example of other countries and grant non-nationals who are health care professionals but currently face obstacles to practicing their profession here the right to support their colleagues in the NHS.

“For some, like refugees and others with the right to work, the barriers are mainly to do with recognition of their qualifications. Others, such as asylum seekers, face additional restrictions around the right to work itself.

“We call on the Department of Health to do everything in its power to support the HSC by giving non-nationals who are qualified health professionals the right to work under supervision during this emergency.”

A spokesperson for the DoH confirmed receipt of the correspondence and said they would respond as soon as possible.

The letter was also signed by Osamah Atheer Ali Al-haddad, a representative of the UK-wide ‘Lift the Ban’ campaign, which is seeking a wider change to the current UK laws forbidding asylum seekers to work. The campaign presented a petition signed by over 180,000 people to parliament in October.

While the UK Government is reviewing its policy on restricting asylum seekers' rights to work, a spokesperson for the Home Office said that “granting general rights to work where an application for asylum is yet to be decided would encourage more to make dangerous journeys to the UK for reasons other than protection".

Most EU countries allow asylum seekers to work in some form.

The Republic of Ireland had maintained a complete ban until early 2018, when it was declared unconstitutional by the Supreme Court. By July the following year a spokesperson for the Department of Justice told the Dublin Inquirer that more than 2,700 asylum seekers had been granted permission to work, and more than 1,200 were confirmed in employment or self-employment. There were approximately 6,000 living in Ireland’s ‘direct provision’ asylum seeker centres at the time.

Asylum seekers in Northern Ireland from non-medical backgrounds are also hopeful for a change.

In her life before having to seek asylum in Northern Ireland, Athi Silevu worked in various roles within the IT sector.

“I haven’t worked in the health sector before, but IT people are needed all over”, she said. “It’s not just doctors (who run hospitals), those IT systems need managed too.”

“It’s frustrating, when you have skills and you can add value”, Ms Silevu said of not being able to work. “It’s not that you are not willing, it is the system that limits you.”

Ms Silevu said that the restrictions caused by Covid-19 have made things worse. “Pre-pandemic, you would go out, you wouldn’t spend your whole day at home. Now you can’t do anything. You are in the asylum system, your mental health issues are so heightened by the whole process, of not knowing. It’s a lot to go through.”

She said that hopes the local authorities will act soon.

“Stormont have power to change the situation, if they want to. I’m not an expert, but I believe they have some power about who can work.