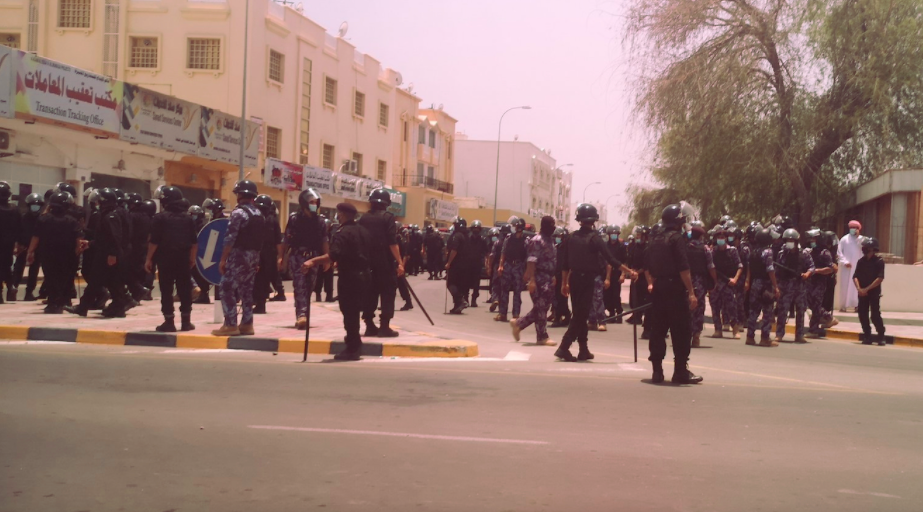 THE Police Service of Northern Ireland (PSNI) is currently considering a further request to train Oman’s police, The Detail can reveal.

Between December 2020 and February 2021, PSNI officers delivered online training to the ‘Special Task Force’ of the Royal Oman Police which deals with ‘public order’ and ‘public safety’ incidents in the authoritarian Gulf state.

However, The Detail and Declassified UK previously reported how this PSNI-delivered training occurred just before suppression of significant protests in Oman which were described as the largest demonstrations the country had seen since the 2011 Arab Spring.

Nabhan al-Hanashi, a political activist in exile who runs the Omani Centre for Human Rights, told The Detail the Omani police response to protesting citizens can be “very extreme”, particularly in response to calls for a change of the regime in the country.

Despite this, the PSNI confirmed to The Detail that it’s “currently considering a request” to provide further public order and public safety training to Oman police’s Special Task Force, and that it will take a decision whether or not to commit to this operation “in due course”.

Mr Corrigan also said Amnesty International has sought for the PSNI to conduct follow-up assessments to ensure “any training offered, results in an improvement in human rights and policing in that country”.

However, he added: “Given the recent crackdown on protesters by Oman's security forces, shortly after previous public order training from the PSNI, it is difficult to accept any argument that this training is resulting in human rights improvement in policing in Oman.

“The provision of police and other security training should be subject to the same level of regulation as the sale of arms and security equipment, and that approval should be refused for any training that could clearly risk facilitating human rights abuses.

“A rigorous, independent human rights assessment should be made before any future agreement to deliver PSNI training to the police in Oman. Unless and until such an assessment is provided, then there should be no such training.”

The request to the PSNI, to conduct the Omani training, was submitted by Northern Ireland Co-operation Overseas (NI-CO) – a non-for-profit public body owned by Invest NI – which comes under Stormont’s Department for Economy (DfE).

However, NI-CO maintained it is unaware where the “prospective UK funding will be sourced from” for this potential future training.

NI-CO hopes the operation will begin in December 2021 and will run until March 2022. The organisation told The Detail it expects the training “will take place both in Oman and Northern Ireland” and will include a maximum of “five currently serving officers”.

Both the Department of Justice (DoJ) and the Policing Board have responsibility for approving the PSNI’s training of Omani police, if the force accepts NI-CO’s request.

The DoJ told The Detail the PSNI hasn’t contacted the department about this proposed Omani operation, but that it will have to if it intends to conduct the training.

An application would have to be made by the PSNI under Section 8 of the Police (NI) Act 2000 which “permits the Northern Ireland Policing Board to provide advice and assistance to international organisations subject to the consent of the Minister of Justice”.

The DoJ also said: “Before the minister gives consent to such programmes the Policing Board undertakes and, if required, shares detailed briefing and assurance, including in respect of the human rights assessment, in relation to providing assistance.

“All international policing assistance is rigorously assessed in accordance with ‘Government Guidance on Overseas Security and Justice Assistance’.

“This is to ensure the provision of such security and justice assistance supports the values of government and UK Policing, and is both consistent with the UK’s domestic and international obligations, and does not present human rights or international humanitarian law risks.”

The Policing Board confirmed its Resource Committee will have responsibility for approving this Omani training if the PSNI decides to carry it out.

However, Mr Corrigan said: “The Chief Constable and the Policing Board should not be rubber-stamping requests for the PSNI to deliver public order training to security forces from countries like Oman with a recent record of suppressing freedom of assembly and expression.”

Receive The Detail story alerts by email
Northern Ireland, policing the world
"This is not the time for the British or Irish governments to give up on each other"