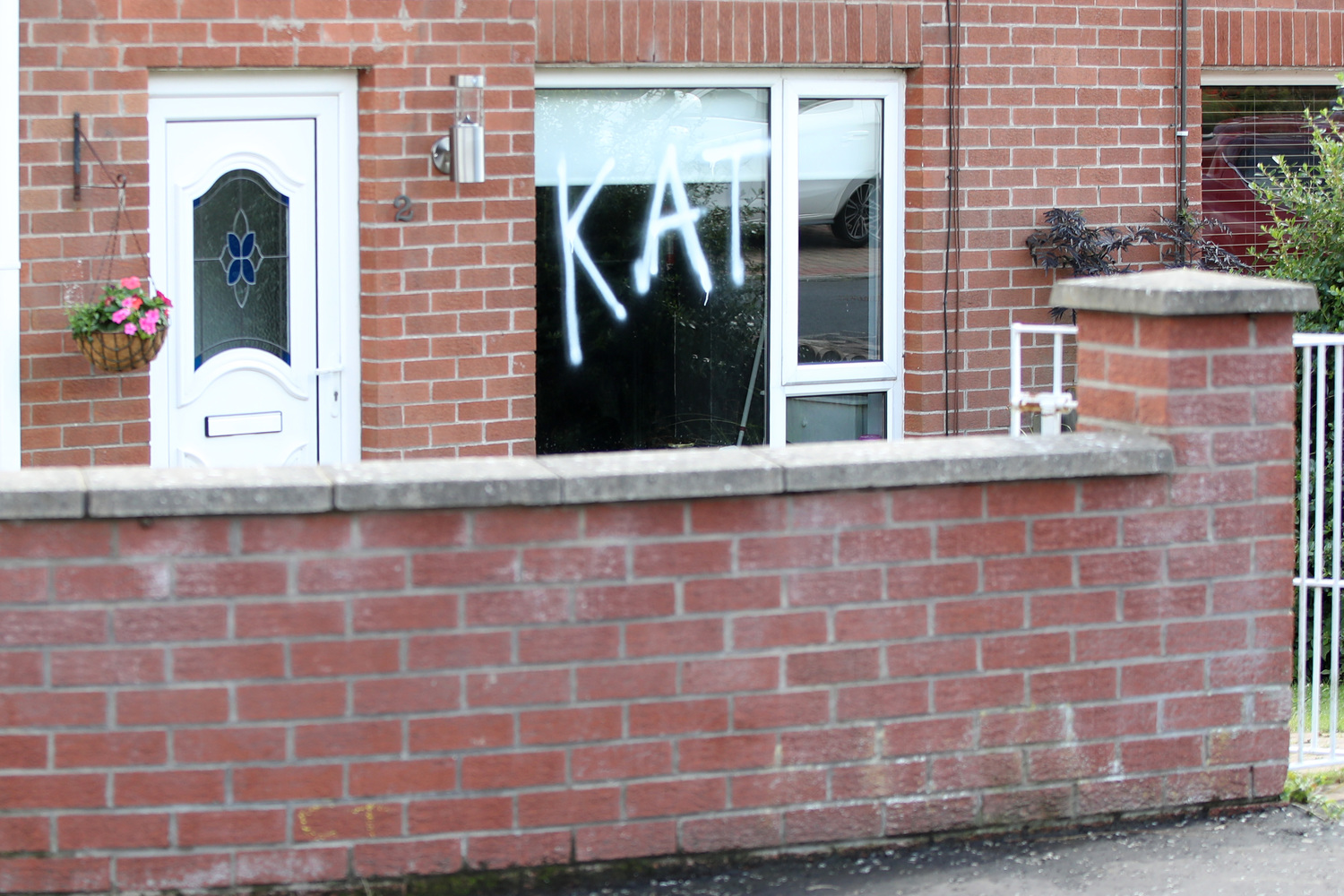 A house in north Belfast, targeted and sprayed with sectarian graffiti advocating genocide against Catholics. Photo by Press Eye.

The force's policy also dictates that the removal of flags is not its responsibility and that officers can only act to remove flags where there are substantial risks to public safety.

However, this approach has been criticised on the basis that those who threaten violence determine what sort of material gets displayed in communities.

The Committee on the Administration of Justice (CAJ) believes this policy permits paramilitaries to display symbols of hate and that the PSNI is failing in its duty to tackle this. However, the PSNI has maintained its approach is in accordance with the law.

CAJ has published a new report which The Detail was granted exclusive access to, relating to how public authorities including the PSNI, handle hate expression in public spaces in Northern Ireland.

The Detail has also seen a PSNI document titled Operational Guidance: Flags, Emblems and Associated Displays, which was last updated in June 2019, that outlines the force's approach.

In addition, there is a PSNI ‘service instruction’ on hate crimes, last updated in 2018, but it does not focus on hate expression in public spaces.

CAJ’s report says that police policy, in prioritising the preservation of public order over tackling hate expression displayed in public spaces, is “problematic at a number of levels”.

It also says the PSNI’s approach “provides an incentive to paramilitaries and others to create a threat to control the type of expression that is permitted in a particular area”.

CAJ’s report adds that the policy “could be interpreted” as the PSNI preventing people from both “placing expression that paramilitaries oppose and protecting expression approved by paramilitaries”, as it’s these individuals who are most likely to react with violence.

The PSNI told The Detail: “As a public authority, (the) PSNI can only act in accordance with the powers provided to it by the legislature.” The PSNI then referenced Stormont's hate crime review which the force said “specifically acknowledged the gaps in the criminal legal framework in Northern Ireland”.

In addition, the PSNI said: “The lack of a specific definition of hate crime imposes significant limitations on the police’s ability to act.”

While CAJ believes there needs to be new, updated legislation in this area – the organisation argues that existing laws are being breached due to expression, which meets the threshold of promoting hatred against groups protected in equality law, being displayed in public spaces and that the PSNI is failing to adequately tackle this.

Material which is offensive to some is not necessarily hate expression. Freedom of expression protects the display of offensive material, but it becomes hate expression if it promotes hatred against groups representing subjects protected in equality law (i.e. religion, ethnicity, disability and sexual orientation).

In public spaces, it is a form of expression and conduct other than speech such as graffiti, or the erection of banners and flags, and the burning of specific items. In its most serious form, hate expression may constitute an incitement to hatred which is a criminal offence in Northern Ireland.

CAJ’s report focuses on hate expression in public spaces, rather than online. According to CAJ, this fits into two categories; content and context.

For instance, examples of content that’s prevalent in Northern Ireland which is by definition hate expression – regardless of context – includes graffiti advocating genocide against sections of the community i.e. KAT (kill all taigs) or KAH (kill all huns).

In addition, it includes flags which incite racial hatred in any context that have been erected in our communities in recent years – such as the Apartheid South Africa flag and a Nazi flag.

By contrast, CAJ says context-based material is only considered hate expression when specific dynamics are at play. 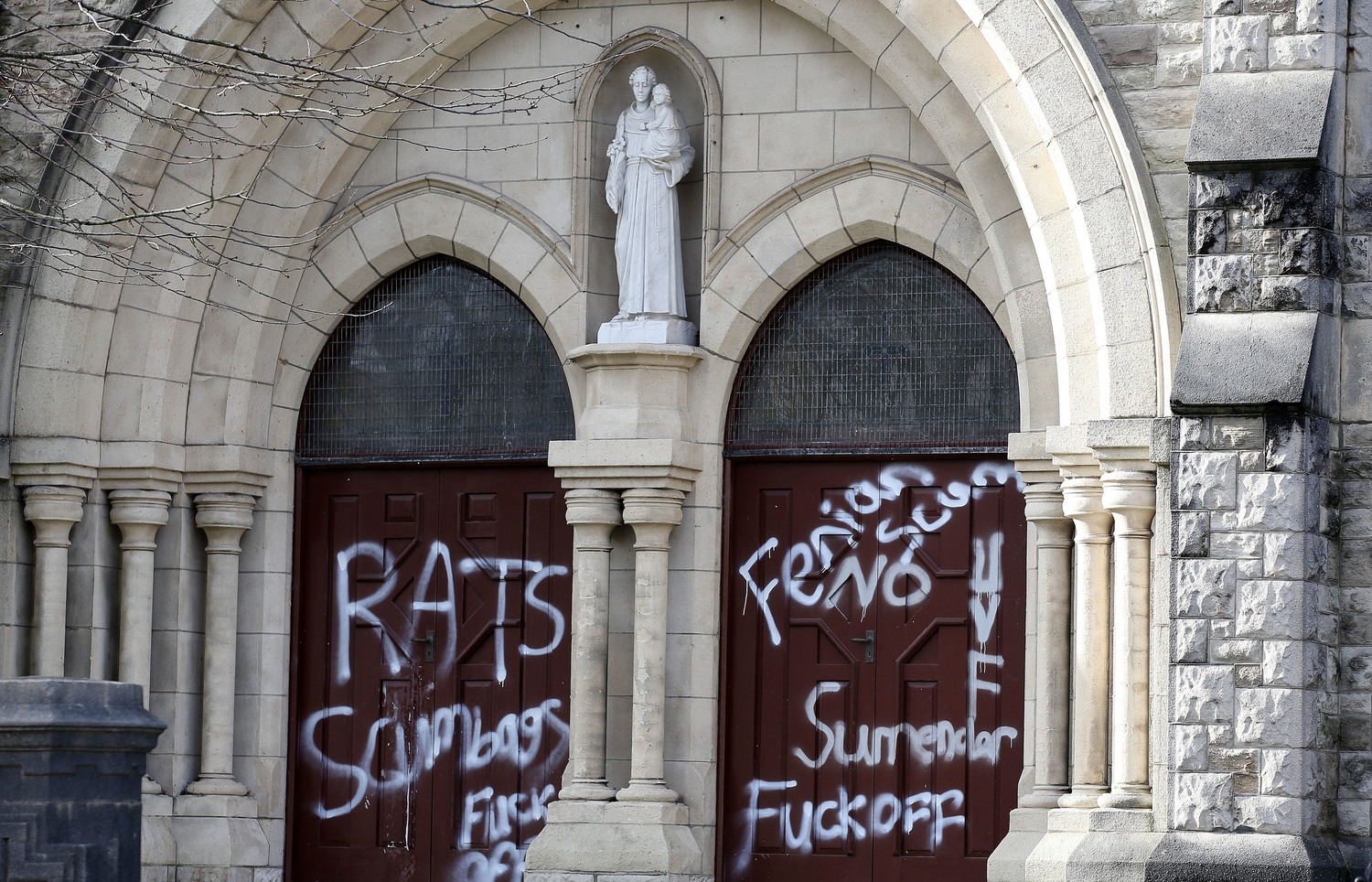 Sectarian graffiti on a Catholic church in Belfast. Photo by Press Eye.

For example, when national flags – which do not constitute hate expression in most contexts – are erected as a form of sectarian or racist intimidation of people from certain housing estates, as happened in Cantrell Close in south Belfast, CAJ determines their placing is a form of hate expression.

In addition, the human rights organisation believes that paramilitary graffiti daubed on or close to buildings which are largely used/associated with the ‘other’ community (for instance Catholic Churches or Orange Halls) is a form of hate expression.

However, while the PSNI said it “notes the interpretation of CAJ” it maintained “such interpretations do not create any criminal offence or other power to act where none otherwise exists”.

The role of paramilitaries in displaying symbols of hatred has “largely shaped the present public sector response”, including the approach of the PSNI, according to CAJ’s report.

CAJ argues it is this which drives the PSNI’s policy to prioritise the preservation of public order ahead of tackling hate expression.

The human rights organisation’s report states: “The reluctance to intervene and remove hate expression is precisely grounded in the context of there being paramilitary involvement.”

CAJ’s report also references how racist banners which state that landlords “should rent to ‘locals only’ have a much greater, harmful impact when they are accompanied by a perceived paramilitary threat to tenants or property owners”.

In addition, CAJ’s report says that “one of the problematic out-workings” of the PSNI guidance “is the practice of conflating the policy response to hate expression with much broader questions of flags and bonfires in general”, and that there’s also a “tendency to conflate all paramilitary expression with hate expression”.

The report continues: “This means, in practice, the issue becomes parked alongside the failure to address much broader issues.”

The PSNI said it “understands the difficulties caused by the display of material associated with paramilitary organisations” but stated its actions are “in accordance with the law”.

As part of the 2005 Joint Flags Protocol, the PSNI had signed up to intervene in cases in which “flags are likely to cause a breach of the peace” but also “for other possible criminal intent”.

CAJ’s report states: “Whilst sectarian or racist hate expression is not expressly singled out in the Joint Protocol…’possible criminal intent’ would cover a range of offences relevant to racist and sectarian expression – including stirring up hatred, intimidation and harassment”.

The aims of the 2005 Joint Flags Protocol state that the signatories, including the PSNI, will “improve the environment by removing the display of paramilitary flags or flags of a sectarian nature”.

They also make reference to “sectarianism and intimidation” and that “there are many examples of aggressive displays, which aim to intimidate and harass”.

A “proactive approach” on the removal of flags in certain instances was also agreed by those signed up to this protocol, with the PSNI designated as responsible for conducting removals in potentially volatile circumstances.

However, the PSNI’s stance – that officers can only act to remove flags where there are substantial risks to public safety – shows it no longer abides by the terms of the 2005 Joint Flags Protocol.

It’s not clear exactly when the police’s approach shifted to the current one, however, CAJ’s report references an incident in 2014 in south Belfast relating to the erection of flags by loyalists which shows the policy had shifted by this stage.

The PSNI did not clarify when its approach changed, but said that it has “on numerous occasions provided assistance to public authorities who have sought to remove material from their premises and will continue to do so where appropriate and feasible”.