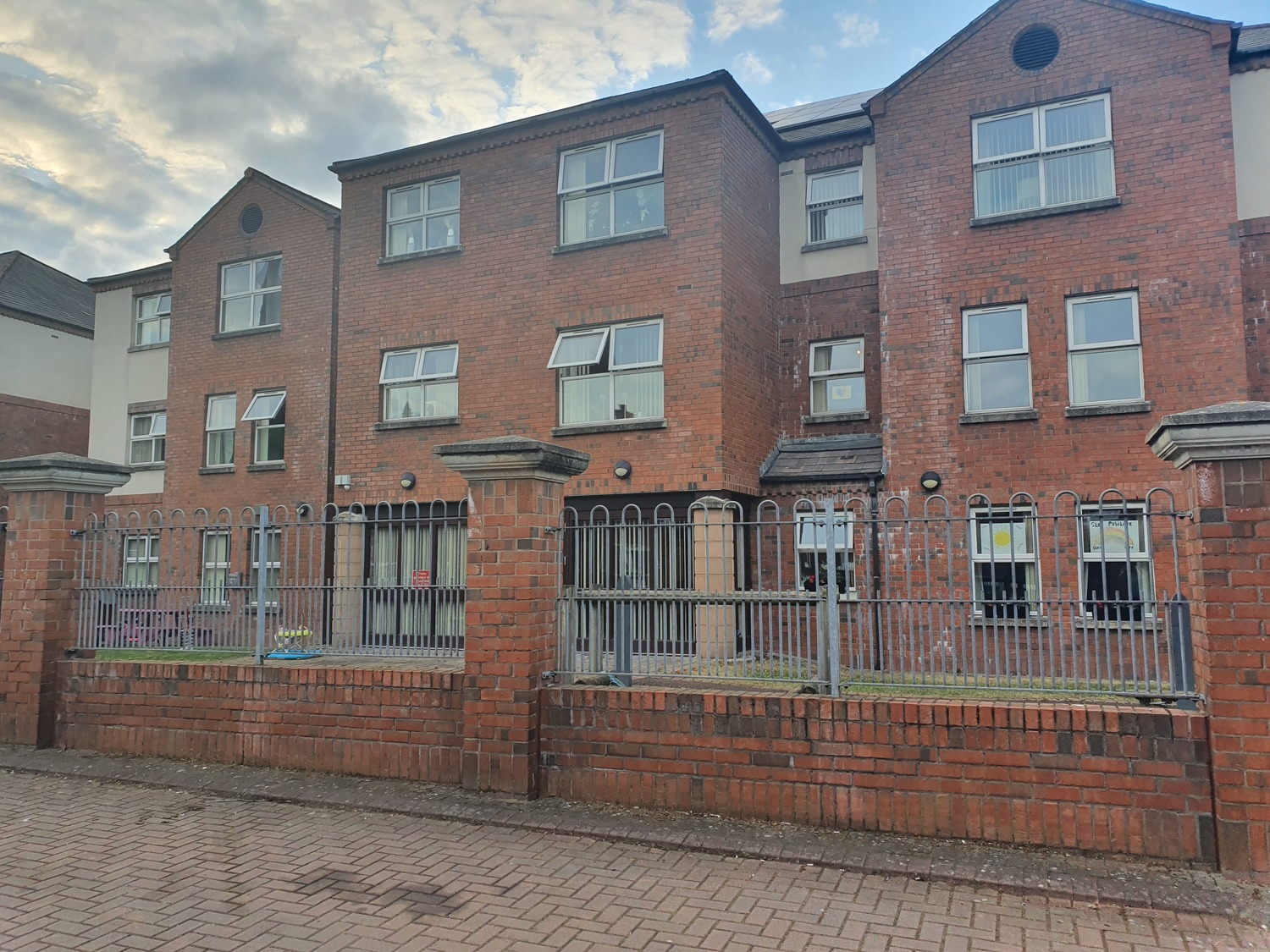 HOMELESS families in a west Belfast hostel have spoken of enduring suffocating living conditions during the coronavirus lockdown, and about the negative impact it's having on their mental health.

Ardmoulin Mews Hostel in the Divis area of west Belfast caters for some of the homeless families on the Housing Executive waiting list. The hostel, which is currently full, has a capacity for 21 families at any given time.

Amy has been living in Ardmoulin for two-and-a-half years, along with her two-year-old and nine-month-old daughters.

"I just can’t cope with it. My mental health is deteriorating to nothing, it's awful. I was already isolated as it was, never mind the lockdown. It’s just another weight on my shoulders," Amy told The Detail.

She is on the waiting list for a home in west Belfast, the area of the city in greatest need of social housing.

Amy is on 186 housing points but is hopeful she can get a further 20 points, on the basis that she has complex needs, which she said "would bring me up to what I need for a house in west Belfast".

She added: "I really don’t know why it has taken so long for them to sort something – two-and-a-half years. These kids need a home with a bit of a garden.

"The hostel is completely full, but right now you’re not allowed to talk to people in the corridors, it’s difficult to get your mail. It’s just awful. It’s so stressful, I can’t even think of words to describe it.

"We’re just going to be locked inside and that’s it. It’s terrible."

There was a fire in the hostel recently, close to Amy’s room. "The fireman woke me up," she said.

Though the fire had been been put out before she was awoken, Amy said the incident had put her "on edge". Nobody was hurt or injured.

Amy's partner, her children's father, is not currently living with her in Ardmoulin.

She said: "We need somewhere together as a family. I can’t keep doing the back and forth between places like I’ve been doing since the kids were born.

"I need a stable home for the family. I need a house, for the kids, for their father to be in.

"I keep asking ‘why me, why me?' I keep hoping that there’s going to be something at the end of this that’s going to be good for all of us."

Amy told us, when her family gets settled, she knows exactly what she wants to do.
"My experience has made me feel passionate about helping people who need homes," she said.

Another woman, living in Ardmoulin, also spoke to The Detail but did not wish to be named.

We will call her Zara.

Zara has been living in Ardmoulin for six months with her husband and two young children. Her two-year-old son has significant health problems.

Zara's son is currently out of the hospital and is living with the family in Ardmoulin, however, being in the hostel during the coronavirus crisis causes Zara concern.

"My son's lungs have collapsed before, which is what is happening with people who have coronavirus," she said. "We’ve been there, we’ve seen it. At one stage he only had a 20% chance of survival. If he catches the coronavirus, he’s going to go to that stage again."

Zara continued by saying it's difficult to isolate from other families in the hostel.

She added: "When I’m going downstairs to take the laundry down I get so frightened because you're touching things which other people are also touching and I worry about then touching my son. It makes me scared.

"My son is ok at the moment, I’ve just kept him inside, but I don’t know what’s going to happen in the next days or weeks, the situation may change. We’re stuck.

"Our windows are jammed shut and we had to try and open one by force the other day. It’s difficult. Sometimes you feel suffocated being in here."

The Detail asked Zara if she has felt supported by the Housing Executive at this time.

She said: "There has been nothing at all to be honest with you which I’ve been surprised about, especially given our family’s situation.

"They should try and support people like us at this time, we were already vulnerable and we’ve become even more vulnerable. It would be nice to get speaking to someone from the Housing Executive, some sort of extra support."

Angeline, who is 21 years old, is another Ardmoulin resident. She has been living in the hostel for four months with her three young boys, all of whom are under the age four.

She told The Detail her "very active" boys are "cooped up" inside the hostel because of the lockdown.

Families in Ardmoulin are permitted to go out for essentials. They can also use the hostel's small garden during the lockdown period, however, Ardmoulin staff try to limit this to one family at a time for social distancing reasons.

"The thought that the lockdown could be going for months really worries me," Angeline said.

"I’m looking on the internet every day to see when this is going to end. The boys are up from 6 am and they go to bed at around 8 pm. I feel sorry for them, they are looking out the windows. It breaks your heart.

"I can’t go to Dublin where my father is in hospital. He was fighting for his life recently, and he was in a coma. Thank God he came out of ICU but he's still in hospital. The fact that I can’t see him really worries me."

From a traveller background, Angeline previously lived in a caravan in her mother's garden in Dublin. The caravan had no electricity and no fridge or freezer, and the roof began to leak.

"It was a deathtrap," Angeline said.

Due to social distancing measures, Ardmoulin residents aren't allowed any visitors to the hostel at this time which means her boys' father, who does not live in the hostel, cannot come to visit.

Angeline added: "It hurts that the kids can’t see their father, it’s what hurts me the most.

"The kids are crying on the phone every night about it. It really is hard. I would move to a house tomorrow if I could. All I want is a home for my family, we need it."

A Housing Executive spokesman told The Detail the organisation has shared government guidance on social distancing with service providers (i.e. those running hostels).

The spokesman added: "It is the responsibility of each service provider to ensure that business continuity measures are in place to ensure essential support is provided to service users through the COVID-19 outbreak."

When questioned if the health crisis exposed issues to do with homelessness in Belfast, the spokesman said it has, in fact, highlighted a "successful partnership" between statutory and voluntary agencies who have "collaborated to assist the most vulnerable".

In response to the specific concerns of the women in Ardmoulin during the lockdown, the Housing Executive spokesman said: "We understand and share the concerns of those living in hostel accommodation at this time."

He recognised that building more social housing was one way to tackle the shortage of homes in Belfast. Housing Executive statistics show there were over 15,000 homeless young people, under the age of 18, in Northern Ireland in 2019.

Elfie Seymour is a housing rights activist with Participation and the Practice of Rights (PPR), a human rights organisation based in Belfast.

All of the women living in Ardmoulin who have been quoted in this article have engaged with Elfie and her colleagues regarding their housing situations.

She told The Detail: "The only solution is to build more social homes. To do this, urban planning and the development of land across the city can no longer be under the influence of property developers looking to make a quick profit.

"All levels of the state – Belfast City Council, Housing Executive and Stormont departments – need to use their powers to eliminate homelessness in our society.

"What has gone before failed us miserably, as evidenced by the stories of the women and their families in Ardmoulin. There can be no going back to the practices and policies which have failed these women, their families and so many others."

Elfie added that the old Mackie's factory site in west Belfast "is just one example" of where social housing development needs to start.

Last week, The Detail published an article regarding PPR's campaign for social housing at Mackie's (click here to view the article).

On March 24, The Detail asked the Department for Communities (DfC), which has responsibility for the Housing Executive, a range of questions regarding homelessness and COVID-19.

Three days later, DfC issued a press release in response to The Detail, which the department also shared more widely, which explained that social housing tenants facing difficulties paying rent during COVID-19 will not be evicted.

DfC also released a string of social welfare benefits to support those in financial difficulty. Additional accommodation for 'rough sleepers' had been sourced as well.

The Minister for Communities Deirdre Hargey, acknowledged that the homeless people living in hostels and shelters are "amongst the most vulnerable in society and need our support and compassion".

Elfie Seymour, said that the governmental response shows the "pace and scale" of change that is possible, adding: "Before the virus, homelessness was spiralling out of control.

"We were witnessing the growth of street homelessness, for the first time, as a permanent feature of our cities.

"What are we going to do when this virus is over? Chuck all of the people out of their accommodation and onto the streets? Let families, who have been socially distancing for months, languish further in temporary hostel accommodation?

"What are we going to do to people who are experiencing a housing crisis due to unemployment and the failure to pay rent or mortgages?

"The welcomed emergency measures from the Minister for Communities have to be sustained and expanded."