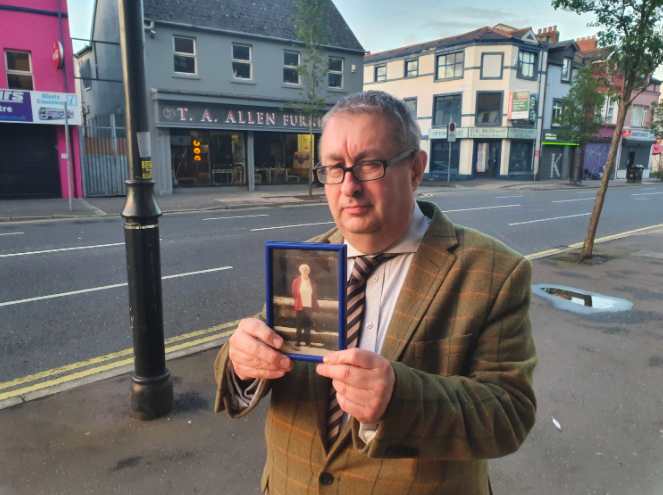 Colin Armstrong, holding a photograph of his mother, Ruth, a former patient of Dr Watt.

THE number of patients who were at one point under the care of Dr Michael Watt, who died in the 10 years prior to 2018, is estimated to exceed 3,500.

A review of the neurologist's deceased patients' medical records was commissioned by the Department of Health (DoH) in May 2018, however, it has still not begun. The review is to be conducted by the Regulation and Quality Improvement Authority (RQIA).

This is the first time since the RQIA review was commissioned that the figure of deceased individuals, whose records are to be examined, has been reported.

We previously reported on how the RQIA was unable to provide us with this figure.

However, the RQIA has now confirmed to The Detail that it estimates this number “will include over 3,500 patients” and that the “final figure will also include a small number of people who died outside the 10-year-period”.

This is because family members of those who died prior to 2008 were told that if they approached the RQIA, their loved one's medical records would also be examined.

One such individual is Colin Armstrong. His mother, Ruth Armstrong, was a patient of the former Belfast Health and Social Care Trust (BHSCT) neurologist prior to her death in November 2002.

Mr Armstrong told The Detail the figure of over 3,500 is “far in excess” of what he expected and that he had thought that the number would be in the low hundreds.

“I am taken aback, but it also makes it even more probable that there are going to be many cases of misdiagnosis among Michael Watt’s deceased patients,” Mr Armstrong said.

A neurology patient recall, the largest of its kind ever conducted in Northern Ireland, found that 20% of almost 3,000 of Dr Watt’s living patients received misdiagnoses while 11% received uncertain diagnoses.

“We are almost certainly bound to see that pattern repeated amongst his deceased patients,” Mr Armstrong said.

However, the RQIA stated that the 3,500 figure includes patients who died from "any cause".

Mr Armstrong also told us that his “overriding emotion” was for the review to begin in an “urgent and sufficient fashion” which has so far “not been the case”.

Ruth Armstrong’s records are set to be included in the review, despite her death occurring outside of the ten-year-period the DoH commissioned the RQIA to examine.

However, this only happened because her son approached the RQIA. Mr Armstrong said: “All of Michael Watt’s patients, whose records are extant from before 2008, should also be included.”

The Detail previously reported on Mr Armstrong’s frustrations at the various reasons the RQIA had provided for delays to the review beginning and how he was concerned that the Covid-19 pandemic led to the review moving “from a shallow grave to a deeper one”.

In addition, we have seen correspondence sent by Police Service of Northern Ireland (PSNI) Detective Superintendent (DS) Jason Murphy to one of Dr Watt's former patients, dated January 13, 2020, which states the RQIA review will be important in considering if “the practices of Dr Watt impact(ed) on the deaths of some of his patients".

Mr Armstrong said: “I can only suppose that the PSNI investigation has not been assisted at all by these unacceptable delays in the RQIA review.”

A panel of experts are to examine Dr Watt’s deceased former patients’ medical records for the RQIA review.

The RQIA said: “The Royal College of Physicians will identify an expert panel to conduct the review of records, working with the Association of British Neurologists.”

People Before Profit’s Stormont Health Committee member, Gerry Carroll, told The Detail: “I think it would be a very wise decision to have, or at least explore appointing, neurologists and expert panel members made up of medical practitioners outside the UK and Ireland, given the proximity to Belfast and the trust.”

Mr Armstrong agreed: “The neurological specialists appointed to review the cases of Michael Watt’s deceased patients should come from outside of the UK and Ireland.

"This is not because I am concerned about the technical expertise of doctors from these islands, it’s about their capacity for independence compared with neurologists from further afield, from Canada or Australia for instance.”

Mr Armstrong also believes the expert panel should have input from a range of different kinds of neurological specialists, including a neuropharmacologist, as well as "possibly a statistical expert".

The RQIA told us it is “currently finalising” these arrangements “and will be announcing further details during April”.

Previously, The Detail reported on how the BHSCT was criticised for its introduction of a new protocol for epidural blood patch (EBP) procedures, which were performed widely by Dr Watt.

This protocol was implemented in November 2019, one year before Health Minister Robin Swann announced that the Independent Neurology Inquiry chaired by Brett Lockhart QC, was being upgraded to have full statutory public inquiry status meaning it was granted the power to compel witnesses to give evidence.

Lyndsay Eccleston, on whom Dr Watt performed an EBP, told The Detail the introduction of the protocol represented “an attempt to explain away previous errors".

The BHSCT told The Detail it is not aware of any patients “who died as a result" of having an EBP procedure in the years following 2014.