“There are no borders in nature”: climate change resistance on the island of Ireland 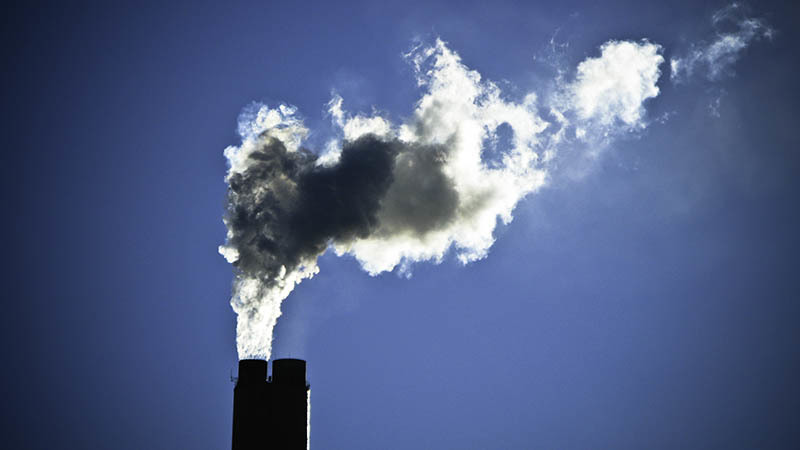 Ireland's Department of the Environment says the effects of climate change can already “be clearly seen”.

The Good Friday Agreement was signed 24 years ago this week, relationships north-south and east-west are evolving and changing. In this context, what are the issues that are relevant and to be considered as we think of our future? The Detail is publishing a series of articles which will explore daily cross-border activity on the island of Ireland. The former editor of the Impartial Reporter newspaper, Denzil McDaniel, introduced the series while below, in the fourth of our stories, Luke Butterly examines how climate issues impact the island as a whole.

While the island of Ireland has so far been spared similar catastrophic wildfires and deadly floods seen in other parts of the world, the effects of climate change can already “be clearly seen”, according to the Geological Survey Ireland, a division of the Republic’s Department of the Environment, Climate and Communications (DECC).

They have monitored diverse and wide ranging impacts on Ireland's environment, society, economic and natural resources, including how rising temperatures have affected farmers, and the increased frequency and impact of storms in the past decades.

Similarly, a major report from Ireland’s Environmental Protection Agency (EPA) released in August issued stark warnings about the severe effects climate change will have across the island in the future. The changes could be different across the island, with an increased threat of flooding for most of the country, while the east – home to the majority of the population – may see an increase in droughts. Rising sea levels will have a particularly adverse effect on a country where most major cities are in coastal regions.

Yet for many decades before the effects of climate change gained such public prominence, there has been an understanding that the island of Ireland is a ‘single biogeographic unit’, and that a joined-up approach to environmental protection is needed between the two jurisdictions.

Speaking to an Oireachtas committee on the Implementation of the Good Friday Agreement, in 2019, environmental protection expert Alison Hough stated: “Despite political arrangements, there are no borders in nature, and what happens in the environment of one jurisdiction unavoidably impacts the other. The only way to preserve the environmental integrity of both Northern Ireland and Ireland is through a coherent system of environmental management.”

She said that this was clearly understood by the drafters of the Good Friday Agreement, who made the environment one of the six agreed areas of North/South cooperation, setting up cross-border bodies such as the Loughs Agency and Waterways Ireland.

“The growing interest in climate and ecological issues” 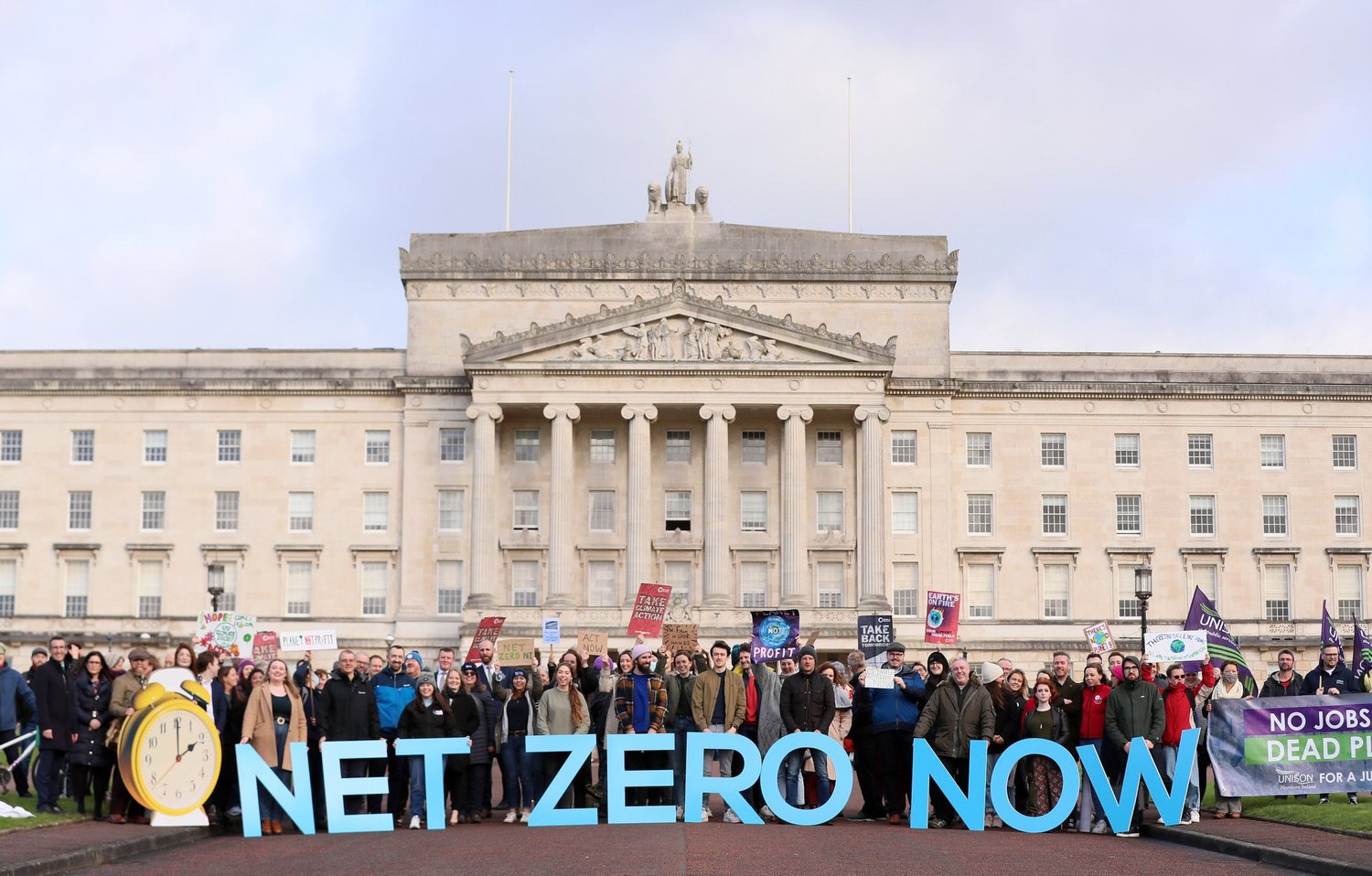 A 2018 mapping exercise by the UK Government showed that there are at least twenty different areas where common environmental approaches are taken in the two jurisdictions. These include an all-island pollinator plan, wildfire initiatives, and all-island air quality research.

Yet despite the potential for a joint-up approach on environmental protection across the island, both jurisdictions routinely fail, says James Orr, Northern Ireland director of environmental group Friends of The Earth. Greenhouse gas emissions continue to rise, and air and water quality in many areas is getting worse.

However, Mr Orr says there has been a promising increase in all-island approaches to climate change, particularly among community and grassroots groups.

Until relatively recently, “I would have said things are pretty bleak, and there is not a lot of trans-frontier cooperation in relation to climate and environmental issues”, he told The Detail.

He referred to the fact that climate change – and the need for strong legal underpinnings – was acknowledged in the New Decade New Approach deal that restored Stormont in early 2020. Climate Change Acts have since become law in both jurisdictions.

Mr Orr said that the area around the Irish border in particular “has been very convenient for environmental injustice”, but that community groups, grassroots groups, are beginning to recognise this as well and are cooperating.

“Taking a much more concerted approach on a cross-border basis”

An Taisce, the National Trust for Ireland, is Ireland’s oldest environmental NGO. The organisation argues that climate and biodiversity action is most effectively advanced on an all-island basis since it was formed in 1948.

While An Taisce has had a long-standing interest in cross border issues, of late they are “engaging much more, very actively with organisations in Northern Ireland, and looking at taking a much more concerted approach on a cross border basis,” Ian Lumley, Head of Advocacy, told The Detail.

This increased focus is in part due to the donation to the NGO of over 2,200 acres of land in Counties Monaghan and Tyrone in early 2020. The Sliabh Beagh site, which straddles the Irish border, is officially designated as a natural heritage area. The site has benefited from EU-funding and cross-border cooperation by local authorities on both sides of the border. 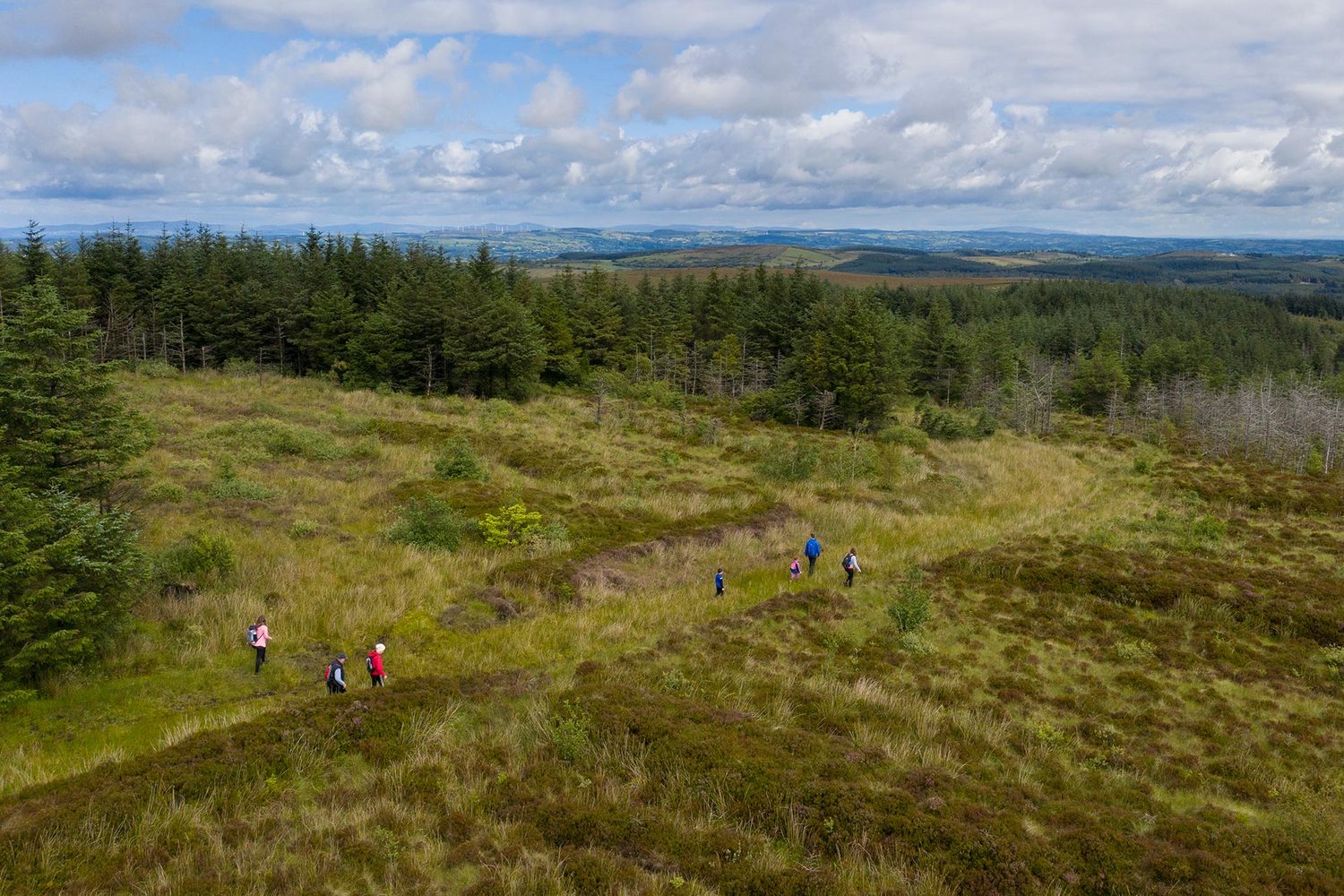 While An Taisce has managed several other such sites in the Republic for decades, this is its first in Northern Ireland. The group intends to manage the site sustainably, and the low-impact farming methods now employed on the site were nominated for an award last year.

An Taisce has also taken an increased interest in all-island environmental issues due to their “mounting concern” over cross-border pollution, which is affecting human health as well as many special areas of conservation, including the Sliabh Beagh site.

The British and Irish Heart Foundations have warned that heart and circulatory disease deaths attributable to air pollution could reach 12,000 on the island of Ireland over the next decade.

Kevin Keane, environmental advocacy officer at An Taisce, says a major cause of this pollution is due to the concentration of intensive animal farming around the border area, and the resulting levels of ammonia pollution.

“Those areas which require protection are being destroyed, because both jurisdictions are wilfully failing to consider the in-combination and cumulative effects,” Mr Keane told The Detail.

“That has a huge environmental impact, especially with ammonia being a serious aggravating factor in terms of greenhouse gasses”, he said. “But it also has a very acute human health impact on people North and South of the border, particularly to the people who are living nearby in the rural/agricultural communities.”

A planning application was temporarily halted in 2018 when environmental groups wrote to the Causeway Coast and Glens Council, stating that the granting of planning permission for the Northern Ireland farms "has not considered the cumulative cross-border effect".

Agriculture is the main source of greenhouse gas emissions in Northern Ireland, which has been described as “an ammonia air pollution hotspot”. In 2019, the Guardian reported that 88% of Northern Ireland’s total land area receives ammonia concentrations above the critical level set to protect keystone species that are vital to ecosystems. Less than a fifth of the land in Scotland is affected, for example. The increasing levels of ammonia pollution here also affect the overall levels in the Republic of Ireland.

“Very important that our resistance links up across the border”

Another example of recent change is the recently formed all-island anti-mining network. While community opposition to mines in Ireland has existed in different areas for decades, it was not until last year that the network was set-up, covering around a dozen groups in Northern Ireland and six in the Republic, in counties such as Tyronne, Donegal, Galway, and Cavan.

For people worried about the potential harmful effects of mines on local communities, forming an all-island network made sense, says activist and researcher V'cenza Cirefice. This is in part to share skills and strategies, but also because the mining industry sees Ireland as one entity. 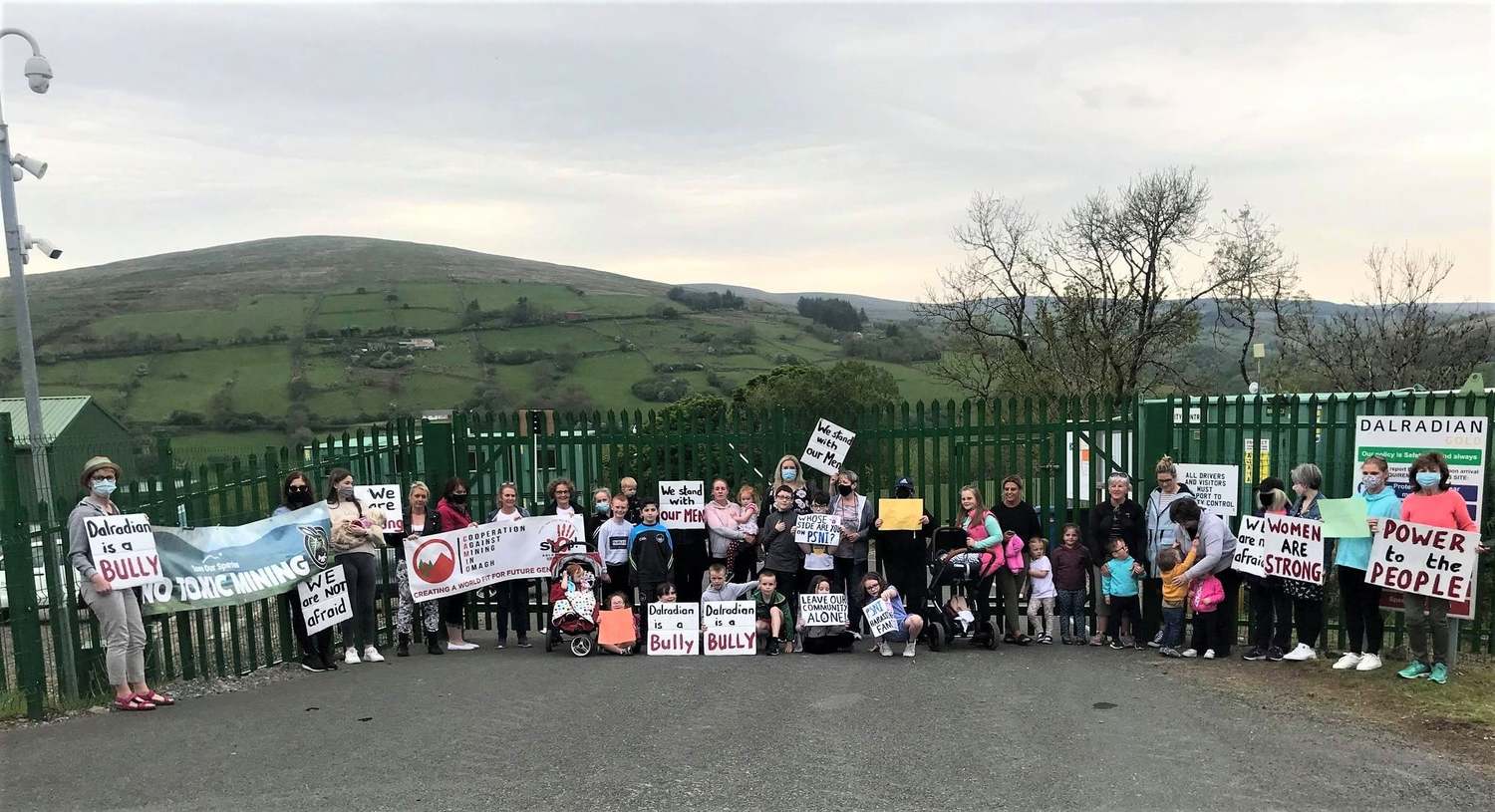 Residents against Tyrone gold mine. Photo: Save Our Sperrins via Facebook.

Cirefice said the network aims to “provide a more coordinated resistance movement, where different groups can learn from each other, get support, and share strategy”, including how to navigate the objection and planning systems.

Many of the areas targeted by mining companies for prospecting licenses are along the border, she said. And many of the mines are gold.

“We would challenge the idea of gold as being necessary to mine, 60% of gold is used for jewellery, some goes to bank vaults, only 12% is used in industry – i.e. circuit boards in phones. We know that we have enough gold already in circulation dug up today that could last industry needs for the next 300 years. So it's very very hard to justify a new gold mine.”

The island of Ireland is consistently seen as one of the most ‘attractive’ locations for mining companies. Both Northern Ireland and the Republic of Ireland have consistently ranked in the top 10 of most attractive jurisdictions in terms of policy, worldwide, and top five in Europe, for most of the past decade.

Mining companies don’t just look at the availability of minerals when making these assessments, but also the political and legal landscape in a country. Companies consistently indicate that approximately 40% of their investment decision is determined by policy factors, according to the Fraser Institute, which gives a “report card” to governments on the attractiveness of their mining policies.

At the world’s leading mining conference in Canada, officials from North and South promote the island of Ireland as one unit, Cirefice says. “At the (Prospectors & Developers Association of Canada) conference, they have an ‘Ireland open for business’ forum, where they have a map of the island with no border on it.

“It became very clear that, when it comes to industry, and state approaches to the mining industry, Ireland is very much sold as one island”, she told the Detail. “So we thought it was very important that our resistance links up across the border as well, because climate change knows no borders.”